Objectives: This study aims to evaluate the relationship between fetuin-A and bone mineral density (BMD) in postmenopausal women.

Patients and methods: Between November 2009 and March 2010, 90 participants were enrolled in the study and divided into three groups including 30 patients in each group. Group 1 consisted of patients who were newly diagnosed with postmenopausal osteoporosis, group 2 consisted of patients who were previously diagnosed with postmenopausal osteoporosis and received treatment, and the control group consisted of healthy volunteers with normal postmenopausal BMD values. Serum fetuin-A level was measured using an enzyme-linked immunosorbent assay (ELISA). Anteriorposterior (AP) lumbar spine, femur neck and total femur BMD were evaluated using dual energy X-ray absorptiometry.

Osteoporosis is a systemic skeletal disease that is characterized by low bone mass and deterioration of bone tissue that results from increased bone fragility and fracture risk.[1]

Loss of bone strength significantly affects the risk of bone fracture, and fractures that lead to pain and loss of function adversely affect quality of life (QoL). Fragility fractures in osteoporosis can add to a pateint's already decreased mobility and increase the need for hospitalization and home care. Low bone mineral density (BMD) and advanced age are the leading factors that lead to a higher risk of osteoporotic fractures.[2]

The glycoprotein fetuin-A [α-2-Heremans-Schmid glycoprotein (AHSG)], which was first described by Pedersen in 1944 is a non-collagenous protein that is stored in mineralized bone and teeth. Fetuin-A is synthesized in hepatocytes,[3] and is a negative acute-phase reactant.[4] In addition, recent studies have shown that during fetal life, fetuin-A is a major component of the non-collagenous bone matrix.[5] Normal fetuin-A serum concentrations range between 0.5 and 1.0 g/L and decrease with inflammation.[4]

Studies have also shown that fetuin-A can inhibit transforming growth factor beta (TGF-β)/bone morphogenic protein (BMP) activity.[6] In the absence of fetuin-A, inhibition of TGF-β/BMP occurs, and osteogenesis is subsequently stimulated.[7] Thus, the decrease in fetuin-A serum levels with respect to the metabolism of bone through osteoblast apoptosis and the TGF-β/BMP system can lead to osteo-inductive effects. Additionally, bone histomorphometric evaluations of either bone formation or bone resorption parameters have shown reduced levels of fetuin-A during these processes.[8] In hemodialysis patients, low fetuin-A concentrations are associated with increased cardiovascular disease, low BMD, and increased mortality.[5]

Ninety postmenopausal women who were treated at the Fatih Sultan Mehmet Training and Research Hospital Physical Therapy and Rehabilitation Clinic, Osteoporosis Department between November 2009 and March 2010 were enrolled in the present study. Approval was obtained from the local ethics committee, and the patients gave their informed written consent for inclusion in the study. The participants were divided into three groups of 30 patients each. Group 1 included patients who were diagnosed for the first time with postmenopausal osteoporosis, group 2 was composed of patients with postmenopausal osteoporosis who were already undergoing treatment, and the control group was comprised of patients with normal BMD levels. The size of our samples was calculated by power analysis, and 45 participants were found to be suitable for each group. However, during the study period, we were only able to confirm a total of 30 eligible patients per group who met our inclusion criteria.

Our patients needed to be postmenopausal (no menstruation for at least one year) women who had osteoporosis in accordance with the World Health Organization (WHO) criteria. In addition, they had to be independently mobile, and have no disease that caused secondary osteoporosis (OP), such as immobilization, metabolic or endocrine disorders, neuromuscular diseases, collagen disease, gastric surgery, malabsorption syndromes, or liver or kidney diseases. A diagnosis of osteoporosis was based on a BMD measurement that was 2.5 standard deviations (SDs) below the typical peak bone mass of a young healthy woman (i.e., the T score was less than -2.5 SD).

Study participants were excluded if there was acute infection, malignancy, myocardial infarction (MI) within the previous month, a history of severe trauma, surgery, burns, diabetes mellitus (DM), liver or kidney disease, hormone replacement therapy (HRT) fields, a history of smoking or alcoholism, or fragility fractures. Additionally, any patients who were taking steroids were also excluded from the study.

For fetuin-A measurements, venous blood samples were taken after fasting for 10-12 hours, and the serum was separated and stored at –20 °C. Serum fetuin-A concentrations were measured using an enzyme-linked immunosorbent assay (ELISA) kit for human fetuin-A (Biovendor Laboratory Medicine, Inc., Brno, Czech Republic). A radioimmunoassay coated tube (RIA CT) kit (Biosource Europe SA, Nivelles, Belgium) was used to measurement 25(OH)D3, with normal levels b defined as higher than 30 ng/mL. Parathyroid hormone (PTH) levels were evaluated by the UniCel DxI® 800 Immunoassay system (Beckmann Coulter, Inc., Brea, CA, USA), with reference ranges from 20-65 pg/mL. In addition, the Westergren method was utilized to the ESR, and an immunoturbideimetric method was used to evaluate the CRP. The reference ranges for the ESR and CRP were 0-30 mm/h and 0-0.5 mg/L, respectively.

Statistical analysis
Statistical analyses were performed using the NCSS 2007 software package (NCSS LL C, Kaysville, UT, USA). The statistical hypothesis for the normality of distribution was tested for all quantitative parameters, and the arithmetic mean (M) and standard deviation (SD) were calculated to describe the parameters with normal distributions. Descriptive statistical methods (M and SD) as well as subgroup comparisons between groups, one-way analysis of variance (ANOVA), Tukey's multiple comparison test, a chi-square test for qualitative comparisons, and Pearson's correlation test were used to examine the differences between groups. The results were considered to be statistically significant at a value of p<0.05.

The demographic characteristics of groups 1 and 2 along with the control group including age, weight, height, body mass index (BMI), and age at menopause, are shown in Table 1.

Table 1. Demographic characteristics of group 1, group 2, and the control group
×

The biochemical parameters and serum fetuin-A levels of all three groups are shown in Table 2. 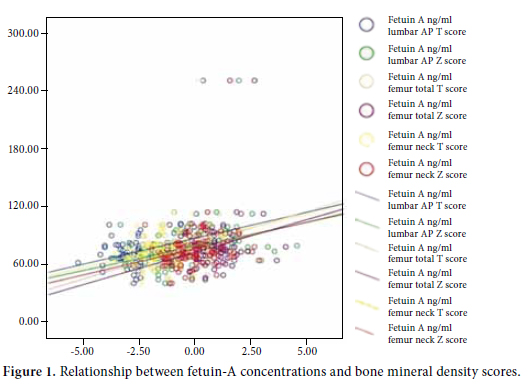 A statistically significant correlation was also observed between the serum fetuin-A concentrations and age (r=–0.218, p=0.0039).

Osteoporosis is a rapidly increasing healthcare problem associated with an aging population base that continues to grow.[9] Although many risk factors have been identified, details of the physiopathology of this bone disease have not been clearly addressed. In vivo and in vitro studies have helped to further understand bone biology and identify the factors that are associated with this common disease that affects bone metabolism. Although recent in vivo studies have supported a role for the fetuin-A glycoprotein in regulating bone mineralization, its function has not been completely described.[10-20]

Fetuin-A is a glycoprotein that is associated with bone formation and remodeling.[21,22] Previous studies have shown a correlation between serum Ca and serum fetuin-A concentrations during bone development in animal models.[23] Fetuin-A is a major component of the non-collagenous bone matrix during fetal life, and it affects bone growth and remodeling by antagonizing the effects of TNF-β/ BMP.[7] In vivo studies have also demonstrated a difference in the serum fetuin-A concentrations in patients with Paget's disease,[24] and those with osteogenesis imperfecta,[25] compared with those found in healthy controls.

Furthermore, a fetuin-deficient mouse study showed that in instances of hypocalcemia, increased bone calcification was observed in individuals with renal failure in the high-risk group for vascular calcification, and that their serum fetuin-A concentrations were very low.[29]

Fetuin-A also plays a more general role in mineral metabolism. Studies with fetuin-A gene-ablated mice showed an irregularity of bone mineralization that reinforced the role of fetuin-A in this process.[6,30] Moreover, in patients with end-stage renal failure with fetuin-A deficiency, decreased concentrations of Ca and P against increased osteoblast apoptosis have been suggested to have a negative effect on bone structure.[6]

A study by Binkert et al.[21] showed that in bone marrow cultures of rats treated with a high dose of dexamethasone, fetuin-A and TNF-β suppressed bone alkaline phosphatase, osteopontin, type I collagen, and bone sialoprotein. In recent years, studies have also shown that fetuin-A is a potent inhibitor of calcification that prevents Ca-P precipitation.[26,29,31,32]

Vascular calcification is a problem often observed in patients with osteoporosis. Common risk factors and mechanisms that cause bone loss and vascular calcification include aging, estrogen deficiency, vitamin D and K abnormalities, chronic inflammation, and oxidative stress (OS).[11] The relationship between BMD and vascular calcification has been previously demonstrated, and many studies have examined fetuin-A concentrations within the framework of this relationship.[8,11-18] Kirkpantur et al.[12] investigated the relationship between BMD parameters, coronary artery calcification (CAC), and serum fetuin-A concentrations in a group of patients who had participated in a hemodialysis (HD) program, and the proximal radius, femoral trochanter, and lumbar spine T scores were found to be lower in the patients with low serum fetuin-A levels.

The low concentration of fetuin-A in postmenopausal women with osteoporosis suggests that it may play a role in the formation and development of this disease. Our findings were consistent with in vitro studies that have shown that fetuin-A may regulate bone mineralization in women.[23-32]

Postmenopausal osteoporosis is characterized by low levels of estrogen and high levels of bone mineralization markers. Likewise Rasul et al.[17] showed that fetuin-A has a positive correlation with estrogen and a negative correlation with C-Terminal cross-linked telopeptide of type I collagen (CTX), a bone mineralization marker.

When the aforementioned results are taken into account we believe that our study further demonstrates the relationship between osteoporosis and fetuin-A. Although fetuin-A blocks the TGF-β/BMP system to inhibit osteogenesis, fetuin-A may affect the role of other regulatory mechanisms with regard to bone metabolism conferred through osteoblasts, osteoclasts, or other bone cells. With that in mind, new in vivo and in vitro studies should be performed to elucidate the mechanisms that underlie these pathways.

One constraint of this study was that the sample sizes of the three groups was limited by the number of participants who met our study criteria. Therefore, future studies should conducted with a larger sample size to confirm our data.

Our findings demonstrated a correlation between BMD parameters and fetuin-A, thus establishing that there is a relationship between postmenopausal osteoporosis and fetuin-A. This marker for bone mineralization can therefore be used as a biochemical parameter within the scope of the diagnosis and treatment of postmenopausal osteoporosis. However, based on the bone fractures that we found, future comprehensive research is still needed.