The head and neck are the primary sites for RMS in children and teenagers followed by the genitourinary tract, limbs, thorax, and retroperitoneum, but it can be found anywhere in the body. Hawkins et al.[3] reported that the head and neck account for 24% of all RMS sites.

In the head and neck, RMS may appear in the orbit, nasopharynx, nasal cavity, paranasal sinuses, temporal bone, pterygopalatine fossa, infratemporal fossa, and other sites,[4] but in less than 3% of the cases, it has also been found in the larynx. In addition, orbital lesions have a better prognosis than the other locations.[5]

Dermatomyositis (DM) is a systemic autoimmune inflammatory disease with characteristic cutaneous manifestations. It was first described in 1887, and both children and adults are affected.[6] The muscles, skin, vessels, joints, gastrointestinal tract, cardiac tissues, and lungs can be involved,[6] and it is well known that DM is associated with various types of cancer. The coexistence rate of a malignancy with DM has varied widely in the literature (6-60%). This is most likely because comprehensive studies are lacking on this topic and the fact that those reports focused on different regions in the various patients.[7,8]

Malignancy can occur before, after, or at the same time as the onset of myositis, and it has been reported that the malignancy risk is highest in the first 3-5 years after the diagnosis of this condition.[9]

In addition, only a few case reports have been published concerning the association of sarcomas and DM, making it a rare event.[10,11] Dermatomyositis that is linked with cancer is generally resistant to corticosteroids and cytotoxic therapies, and this activity reflects the state of the cancer. Some reports also exist that have described an improvement in DM without immunosuppressive drugs after resection of the cancers.

This case report presents a patient with DM and laryngeal RMS who was treated with surgery, chemotherapy, and radiotherapy. To our knowledge this is the first reported case of concurrent DM and RMS in a patient.

A 59-year-old man was admitted to our clinic with a six-week history of intermittent alteration in his voice quality. He had no history of sore throat or the feeling of a lump in his throat and had no symptoms suggesting laryngopharyngeal reflux. The patient had smoked one pack of cigarettes per day for 25 years and had been diagnosed with dermatomyositis six months prior to his admission after undergoing a skin biopsy. 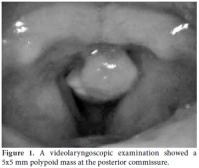 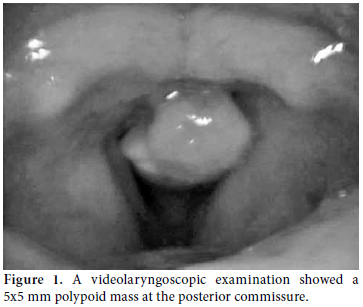 The patient was hospitalized and treated with prednisolone for his DM because surgery could not be performed until his general condition became suitable for general anesthesia.

After the medical therapy for DM, a direct laryngoscopy was performed, and the lesion was totally excised. A histological examination showed that the cells were strongly positive for desmin and vimentin and also focally positive for myogenin. However, they were negative for CD-34, BCL-2, CD-99, pan-cytokeratin (pan-CK), cytokeratin, HMB-45 (a melanocytic cell-specific monoclonal antibody), and S-100 protein as well as the leucocyte common antigen (LCA) and, epithelial membrane antigen (EMA). Additionally, a few cells were positive for actin. A histological examination of the specimen confirmed the diagnosis of RMS.

After surgery, the patient was referred to medical and radiation oncologists who recommended chemotherapy and radiotherapy. The chemotherapy procedure included four cycles of ifosfamide, mesna, and doxorubicin (Adriamycin) (IMA) followed by radiotherapy at 200 cGy/day for a total of 6000 cGy. Thus far, the patient has undergone monthly follow-up visits, which include a clinical examination and videolaryngoscopy, and remains free of disease 18 months after the histological diagnosis.

The larynx is an uncommon site for sarcomas. Glick[12] first described a case of laryngeal RMS in 1944. In addition, laryngeal pleomorphic RMS is found more frequently in males.[13]

The literature on laryngeal RMS indicates that the tumor tends to originate in the vocal cord region and appears as a polypoid mass which may extend above and below the vocal cords.[14] In our case, there was a 5x5 mm polypoid lesion at the posterior commissure.

Since the clinical findings and macroscopic appearance of RMS are the same as other laryngeal neoplasms, the histopatological and immunohistochemical examinations are crucial for diagnosis,[14] and in our case, the definitive diagnosis was established through these means.

Rhabdomyosarcoma is treated by a combination of surgery, chemotherapy, and radiation, with the most frequently used chemotherapy agents being vincristine, cyclophosphamide, dactinomycin, adriamycin, ifosfamide, and virion protein VP-16 (etoposid). The use of adjuvant chemotherapy with radiotherapy is gaining popularity because it reduces the need for mutilating surgery in the head and neck due to RMS.[15]

After surgery, our patient was treated with four cycles of IMA and radiotherapy at 200 cGy/day for a total of 6000 cGy. However it is not clear if this treatment modality has any significant effect on the outcome in adult laryngeal disease since only a few cases have been reported.

Dermatomyositis is an idiopathic, chronic, inflammatory myopathy characterized by cutaneous findings. It primarily affects the skin and the muscles but may also affect other organ systems. In addition, DM frequently affects the joints, esophagus, lungs, and, less commonly, the heart.[16]

The malignancy rate of DM is up to 10% and is more common in adults over the age of 60 as well as in the first five years after diagnosis.[17] Our patient was a 59-year-old man with only a six-month history of DM.

Sigurgeirsson et al.[8] reported that had they detected 61 malignancies in 59 of 392 DM patients either at the same time as the diagnosis or afterwards and that the malignancy rate was higher in women than men.

The five-year survival rate ranges between 30% for patients with metastasis at presentation, but it increases to 80% when the disease is localized so that complete resection can be performed.[18,19] Today, our patient remains free of disease 18 months after the histological diagnosis.