Patients and methods: Between January 2010 and December 2011, 71 patients with RA who were scheduled for follow-up visit before Ramadan month and at two months after Ramadan month were retrospectively analyzed. The fasting cohort (n=39) and non-fasting cohort (n=32) were compared using the Disease Activity score 28 (DAS 28) and the patients' dietary habits both before and during Ramadan month.

Malaysia is a multiracial country with a large Muslim population, and fasting during the month of Ramadan is a part of their religious practice. This month-long fast involves abstaining from all kinds of oral intake between sunset and dawn, which has been found to have an effect on the course of rheumatological diseases and a patient’s intake of medication.[1]

The limited time for calorie and fluid intake during Ramadan causes physiological alterations in the body. With binging upon the breaking of the fast being a common practice, the increased intake of certain foods during this month may affect rheumatoid arthritis (RA) disease activity. Some types of food also can improve or worsen the disease activity by influencing the immune system and altering the inflammatory process or by provoking allergic responses which can necessitate other symptoms or worsen those that are already present.

A retrospective case-control study was carried out on RA patients in the Rheumatology Clinic of the National University of Malaysia (UKM) Medical Centre. Universal sampling was utilized in which 178 patients who had appointments at the clinic two months after the month of Ramadan in 2010 and 2011 were identified. We had a total of 71 respondents (6 males, 65 females; mean age 59.5 years old; range 27 to 81 years), with 39 in the fasting group and 32 in the non-fasting group. The fasting cohort was composed of Malay patients plus one other from Myanmar, and the non-fasting group was made up of Chinese and Indian patients. In addition, most of the respondents were married (87.3%) (Table 1).

Table 1. Demographic data of the fasting and non-fasting cohorts
× 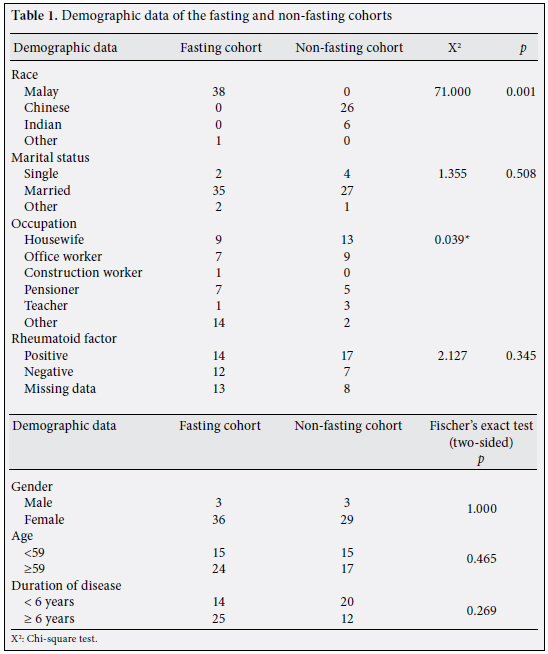 The data was collected on a form which included the patient’s socioeconomic background, clinical presentation, laboratory investigation, and diet history both before and during the month of Ramadan. Disease activity in RA patients is measured using the Disease Activity 28 (DAS 28) for RA. The score is calculated using a mathematical formula that includes the number of tender and swollen joints (out of a total of 28), the erythrocyte sedimentation rate (ESR), which is a blood marker of inflammation, and a global assessment in which the general health of the patients is rated on a scale ranging from “very bad” (a score of 1) to “very good” (a score of 100). A DAS 28 score of greater than 5.1 implies active disease while a score of less than 3.2 indicates a well-controlled disease and one of less than 2.6 shows remission.[2] All data was obtained from the patients’ past clinical records of their appointment before Ramadan and two months afterwards. Blood investigations were usually done two weeks prior to their day of appointment, and the dietary history was obtained based on the patients’ recall of their food intake in the periods before and during Ramadan using a measurement of household units per week.

This study was approved by the ethics committee of the UKM Medical Centre and Department of Internal Medicine.

Since the sample size of the study was less then 200, all of the data was tested for normality using the SPSS software program and Q-Q plot, and we found normal distribution. In addition, there were no significant differences between the two cohorts regarding gender, age, marital status, or rheumatoid factor (RF). However, there was a significant difference in the duration of RA as a majority of patients in the fasting cohort had been suffering from RA for six years or more, whereas most of the patients in the non-fasting cohort had been diagnosed with RA for less than six years (p=0.039). Furthermore, the two groups also differed significantly concerning their occupational status (p=0.022).

Both cohorts were compared in terms of RA disease activity using the DAS 28, which is comprised of blood inflammatory markers [ESR and C-Reactive Protein (CRP)], the number of tender joints in the patient, the patient global assessment (VAS), and their functional class. Functional class in RA is divided into four categories based on the patients’ ability to perform usual self-care, vocational, and avocational activities. Furthermore, we also compared the patients’ clinical symptoms of morning stiffness and fatigue.

The differences in the values between the fasting and non-fasting groups as they related to the DAS 28 and its components both before and after Ramadan were not significantly different (Table 2).

Table 2. A comparison of the differences in the Disease Activity Score 28, erythrocyte sedimentation rate, C-reactive protein, functional class, patient global assessment (VAS), and number of tender joints between the fasting and non-fasting cohorts before and after Ramadan
×

In terms of clinical symptoms, fewer patients in both groups experienced morning stiffness after Ramadan (Table 3), and there was no significant difference regarding fatigue before and after this month of fasting in either cohort (Table 3). Moreover, no significant difference was found between the number of fasting and non-fasting patients who experienced fatigue either before or after Ramadan.

Table 3. A comparison of the occurrence of morning stiffness and fatigue between the fasting and non-fasting cohorts before and after Ramadan
× 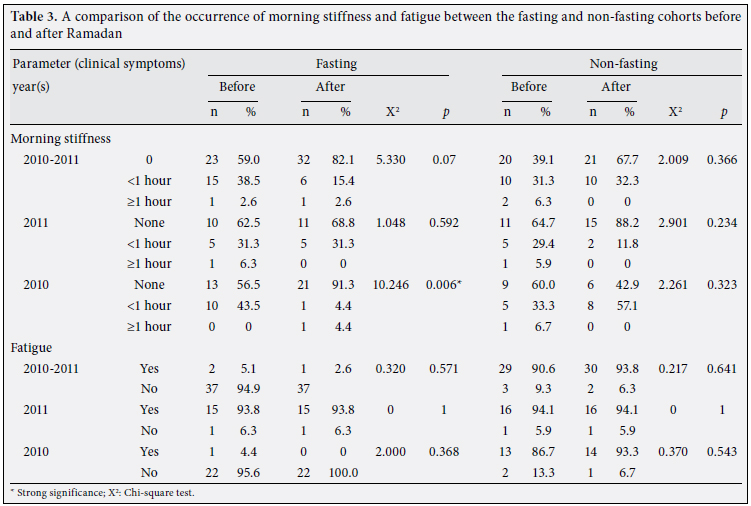 The mean intake of green vegetables, non-green vegetables, fruit, red meat, chicken, eggs, fish, dairy products, caffeinated drinks, carbonated drinks, rice, grain, and high calorie foods decreased in the fasting patients during Ramadan compared with the amounts before it began. In contrast, the mean intake of seafood increased during Ramadan compared with the amount eaten before it began, but the difference was insignificant (p>0.05). We determined that the change was only significant for the intake of rice (p=0.009) and high calorie foods (p=0.022) (Table 4).

Table 4. Mean (household unit) weekly food intake in the fasting and non-fasting cohorts before and during Ramadan
× 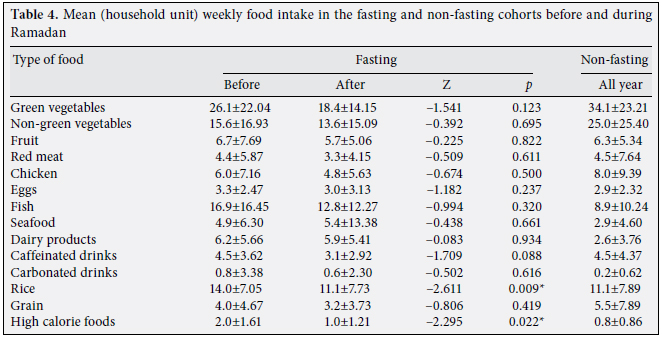 The overall rate of medication compliance was more than 65% among the patients in both gorups, and no significant difference was noted when we examined this issue both before and during Ramadan.

The DAS 28 was not significantly lower after Ramadan. This was in contrast to a questionnaire-based survey conducted with 15 patients who had RA in India in which 61% of the participants recorded that Ramadan fasting had a positive effect on their disease activity and that this lasted until the next month.[3] In a study by Al-Dubeikil and Abdul-Lateef,[4] 78% of the 31 RA patients studied reported improvement in their overall assessment at the end of Ramadan fasting, whereas the majority of the non-fasting patients in this study had no changes or even became worse.

Clinically, the fasting patients in our retrospective study recorded a reduction in morning stiffness after Ramadan. Furthermore, we noted no significant difference in fatigue in the fasting and non-fasting patients after the month of fasting. In addition, a reduction in the number of tender joints was also found, but this was not statistically significant. This contrasted with the results in the study by Al-Dubeikil and Abdul- Lateef[4] which found significant improvement in morning stiffness, the number of painful joints, the number of swollen joints, and grip strength.

We also identified no significant changes in the patients' inflammatory markers, although there was a decrease in the mean ESR levels and an increase in the mean CRP levels after Ramadan fasting. This differed from a study conducted during the month of Ramadan by Furuncuoglu et al.[5] that involved 39 healthy subjects in Istanbul in which the author noted a significant reduction in the ESR levels among fasting patients (p<0.05).[5] However, another study that included 31 Ramadan RA patients who were fasting reported no significant changes in the ESR levels.[4] Additionally, a study made up of 30 RA patients in Bhopal, India showed that 70% of the patients had decreased levels of circulating immune complexes after Ramadan.[6]

In a controlled trial involving RA patients on a one-year vegetarian diet, Kjeldsen-Kragh et al.[7] found beneficial outcomes in which pain and swelling were reduced. However, the benefits were transient and lasted only during the four to five days of fasting.

In this study, the lack of significant changes in RA after Ramadan fasting compared with the favorable outcomes found in other studies could be due to the differences in lifestyle in Malaysia. The culture and customs in different Islamic countries determine the food habits during Ramadan.[8] In Islamic fasting, Muslims do not have to adhere to a diet of selective food. In our study, there was a decrease in the amount of food eaten (except for seafood), and there was also a significant reduction in the intake of rice and high calorie foods. This is in contrast to the common local belief in the practice of overcompensating for the lack of food intake during the day while fasting. A study in Saudi Arabia found an increase in total energy intake during Ramadan,[9] but studies in India and Birmingham, England showed otherwise.[10,11] Furthermore, a study among Tunisian women showed that the energy intake during Ramadan was comparable to that of the pre- and post -Ramadan levels.[8] In contrast to our study results, Gharbi et al.[12] and el Ati et al.[8] reported that there was an increase in protein and lipid intake during Ramadan but a reduction in carbohydrate intake.

The results of this study may not be a true representation of all RA patients in the UKM Medical Centre due to selection bias. Although universal sampling was done, more than half of the identified patients were excluded due to their refusal to participate or our inability to contact them. The study was also done retrospectively; therefore, the patients’ appointments before Ramadan and two months later were not specifically made with our study in mind. Recall bias was also present as the patients were asked to remember their diet history in 2010 and 2011, and response bias existed as the patients may have given a diet history that was more inclined towards a healthy diet, which may not have been accurate. In addition, some of the sources for our information may not have been reliable since the diet history for a few respondents was provided by a third party. Several confounding factors such as diet, RA treatment, and the effect of fasting, all of which affect the outcome of RA, were not controlled, which was another limitation of our study.

In conclusion, significant dietary changes during Ramadan contributed to a reduction in RA disease activity, but this was not statistically significant. Physicians might need to take into account changes in diet and the time of medication intake in order to improve RA disease management during Ramadan. In addition, future studies should be conducted prospectively and tailored to control the confounding factors that may affect RA disease activity while fasting at Ramadan.