Complex regional pain syndrome (CRPS) is a clinical syndrome characterized by pain, tenderness, dystrophic skin changes, swelling, stiffness in joints, and vascular instability. The pathogenesis of CRPS is not completely understood, and no single hypothesis proposed to date has explained all the features of this disorder. However, several predisposing factors have been identified. This report describes an unusual cause of CRPS. Although CRPS following herpes zoster is clinically well recognized, only a few documented cases have been reported to date. Here, we present a case of 64-year-old woman with characteristic signs and symptoms of CRPS in the right hand that appeared four weeks after she had a typical herpes zoster infection involving the right C7-C8 dermatomes. Early diagnosis and treatment with medical and physical therapy achieved a progressive improvement of the disease within a brief period of time. In this report, we aim to draw attention to CRPS which can occur as a result of very different conditions. Recognition and knowledge of CRPS are important since a delay in proper diagnosis and treatment may have a negative effect on a patient's prognosis.

Complex regional pain syndrome (CRPS) is a clinical syndrome with a group of symptoms, including burning or aching pain, hyperalgesia or allodynia, edema, sudomotor and vasomotor changes in the distal extremity. The mechanisms underlying this disorder are poorly understood but may be related to changes in the sympathetic nervous system and/or neurogenic inflammation.[1,2]

Herpes zoster (HZ) is an infectious disease characterized by vesico-bullous skin eruptions in dermatomal distribution. It is caused by a reactivation of the varicella zoster virus.[3,4] The most common complication of HZ is post-herpetic neuralgia. Less frequent neurological complications include peripheral motor paresis and central nervous system disorders.[5]

Complex regional pain syndrome as a complication of HZ was first reported by Sudeck in 1901.[6] Herpes zoster is well known clinically to be a precipitating factor in CRPS, but to date only a few reports of cases have been published.[7] This report presents a case with CRPS development after an HZ virus infection.

A 64-year-old female who developed an erythematous rash with clear, grouped vesicles involving the right C7-C8 dermatomes visited the dermatology department of our hospital. She was diagnosed as having an HZ infection and treated daily with 1500 mg oral acyclovir for three weeks. At the second visit, four weeks after the onset of HZ, she complained of burning pain and edema in her right hand and fingers. She was referred to our department. When the patient was admitted to our department, she described intense burning pain, swelling, and stiffness in her right hand and fingers. She only had a medical history of hypertension.

A physical examination of the patient revealed hyper-pigmented, macular lesions in the right C7 and C8 dermatomes and redness in the palm of the hand along with edematous and tautness of the skin at the right dorsal hand and fingers (figure 1). The entire hand was cold and damp, even though distal pulses were intact. The distal and proximal interphalangeal and metacarpophalangeal joints of the fingers and wrist were painful and reduced when range of motion (ROM) was tested. The ROM of the elbow and shoulder were normal. 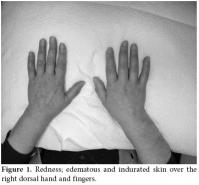 Figure 1. Redness; edematous and indurated skin over the right dorsal hand and fingers.
× 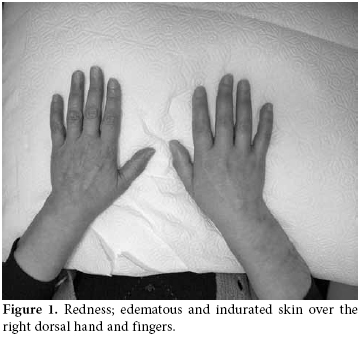 All of the laboratory test values (hemogram, routine biochemistry, C-reactive protein, and rheumatoid factor) were within normal limits. Radiographs of both hands and wrists (figure 2) were also found to be normal. After these results, a three-phase bone scan (Technetium-99m) was obtained. It showed diffuse increased uptake and hyperemia in the right wrist in the first phase, and diffusely increased uptake in the right wrist, metacarpals, and phalanges in the third phase (figure 3). The appearance was scintigraphically compatible with CRPS. 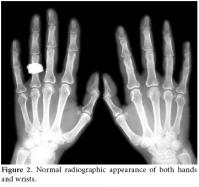 Figure 2. Normal radiographic appearance of both hands and wrists.
× 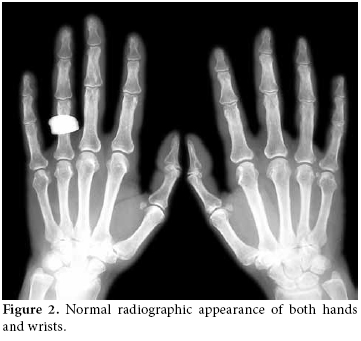 Herpes zoster is a painful, unilateral, dermatomal, vesicular rash caused by the reactivation of the latent varicella zoster virus.[4] The severity and prevalence of HZ increase with age and in patients with immunodeficiency or cancer.[8] Although our patient was in her early sixties, she had no systemic disease except for hypertension.

Complex regional pain syndrome associated with HZ was first reported in 1901, but has received little mention in the literature since then.[6,7,9,10] Several pathways can explain the role of HZ in triggering CRPS. In the first pathway, HZ produces intense pain. Researchers[11,12] believe that an initial nociceptive afferent stimulation can sensitize a wide range of multireceptive neurons in the spinal internuncial neuron pool that are at the center of an abnormal reflex. This results in an excessive, sympathetic outflow. In the second pathway, HZ infection produces an injury in the peripheral nerve fiber. Some hypotheses invoke the formation of abnormal synapses, usually between efferent sympathetic nerves and afferent sensory nerves or sensitized peripheral nerves that may discharge spontaneously.[11,12] A final hypothesis involves the provocation of local tissue inflammation secondary to cytopathic changes induced by the HZ infection. This local trauma has been proposed as being important in the pathogenesis of CRPS.[13]

The diagnostic criteria for CRPS were defined by the International Association for the Study of Pain (IASP) in 1994.[14] Bruehl et al.[15] suggested that the sensitivity of IASP criteria for CRPS was quite high but the specificity was poor, so they proposed modifications to the IASP criteria. These modified criteria are shown in table 1.

A diagnosis is usually based on clinical appearance and may be supported by other diagnostic methods like radiographic and scintigraphic studies. Radiography typically demonstrates patchy demineralization in the affected part which may be the result of disuse. Three-phase bone scintigraphy shows increased activity in both the blood pool and static phases. A comparison of radiography and bone scintigraphy revealed that bone scans are more sensitive than radiographs, especially in the early phase of the condition[16] as was seen in our case.

Early diagnosis is the mainstay of successful treatment of CRPS. Management consists of physical therapy, pharmacotherapy, block therapies, and surgical sympathectomy.[17] In our case, early diagnosis and management with medical and physical therapy achieved a progressive improvement in the diseases. When HZ is diagnosed, it is also recommended that adequate antiviral therapy should be started as soon as possible because it seems to reduce the severity of peripheral nervous system damage.[3]

Although CRPS has been reported to occur as a result of very different causes, including cutaneous alterations, general awareness of this condition seems to still be relatively poor.[18] This report described an unusual cause of CRPS. In this report, we aimed to draw attention to CRPS, as recognition and knowledge of this disease are essential, because delay in the proper diagnosis and treatment may have a negative effect on patient outcome.[19]