Pleuropericarditis Associated with Sulphasalazine in a Case of Rheumatoid Arthritis: A Drug-Induced Lupus-Like Syndrome

Pericarditis, a life-threatening condition, can be seen in rheumatic diseases. It may occur secondary to rheumatic diseases or drugs used in the treatment. In this article, we present a case of 47-year-old female, who had joint complaints for 15 years and had treatment of methotrexate and corticosteroid for six years. In the last three months, after the addition of sulphasalazine to her treatment, she developed chest pain, palpitations, rash, fever, and pleuropericarditis and was subsequently diagnosed with systemic lupus erythematosus induced by sulfasalazine. When cardiac disease is seen in a patient with rheumatoid arthritis, medication should be discontinued immediately, and it should be kept in mind that cardiac involvement may be associated with drugs.

Pericarditis is the most common heart condition associated with RA and has been reported at a rate of 30-50% in echocardiographic and post-mortem studies. Despite the high rate of pericarditis, clinical manifestations are found in very few patients, occurring in most patients after the initial diagnosis of arthritis. However, in some cases, it can be seen before the diagnosis of RA.[1]

Therefore, a careful etiologic evaluation should be done in patients with pericardial effusion for the early diagnosis of RA. Pericarditis adversely affects the prognosis of patients, and, especially within the first year of diagnosis, age and cardiac status determine the prognosis.[2]

Nonsteroidal anti-inflammatory drugs (NSAIDs), corticosteroids, and/or other immunosuppressive drugs are used in the treatment of pericarditis. A pericardiectomy is required in more serious cases.

Drug-induced lupus erythematosus (DILE) is defined as an entity characterized by clinical manifestations and immunopathological serum findings similar to those of idiopathic lupus, However, these are temporally related to continuous drug exposure and resolve after the discontinuation of the offending drug.

The typical laboratory profile of DILE consists of positive anti-nuclear antibodies (ANA) and antihistone antibodies, the latter being regarded as the serum marker of this subset.

Demonstration of ANA occurs in approximately two-thirds of the cases. Management is based on the withdrawal of the offending drugs. Topical and/or systemic corticosteroids and other immunosuppressive agents should be reserved for resistant cases.[3]

When the symptoms of pericarditis, chest pain, arthritis, arthralgia, rash, and fever are seen, a druginduced, systemic, lupus-like syndrome should be considered.[4-8]

In this article, we discuss the reasons for pleuropericarditis in a patient with RA.

A 47-year-old female patient was admitted to the Yüzüncü Yıl University Faculty of Medicine cardiology clinic with complaints of shortness of breath and palpitations in August 2009. Medium to severe pericardial effusion was detected in an echocardiography examination. Suspecting cardiac tamponade, fluid was drained immediately and in the screening for pericardial effusion, leukocytosis (7200 leukosytes per mm. cub.) was determined. With the diagnosis of pericarditis, ceftriaxone and ciprofloxacin were started. However, no bacterial reproduction was seen in the patient᾿s pericardial fluid or blood cultures. This appeared to be on account of pericarditis due to rheumatoid arthritis. The patient was conscious and cooperative. She had complaints of widespread joint pain, chest pain, shortness of breath, and palpitations. Three weeks after starting sulphasalazine treatment for fever, the patient developed a swollen nose and cheeks along with erythema on her back. These findings were followed by increased skin complaints when exposed to sunshine. Shortness of breath and palpitations developed afterward. An examination revealed pain, swelling, and increased temperature in the carpometacarpal and metacarpophalangeal joints along with a limitation of motion in the left knee. Ulnar deviation and swan-neck deformity were detected in both hands. Tests revealed a blood pressure of 90/60 mmHg and a cardiac pulse rate of 120/min. and a body core fever of 37 centigrate. In a laboratory examination, the following was discovered: leukocyte count 18000, Hgb: 11.5 g/dl, platelets: 365.000, erythrocyte sedimentation rate (ESR): 34 mm/hour, CRP: 18.5 mg/dl, GGT: 283 U/L (5-31), ALT: 40 U/L (0-31), AST 35 U/L (0-31), LDH: 730 U/L (240-480), RF: 141 IU/mL, and anti-CCP was found to be positive.

A chest radiograph showed an increased cardiothoracic index and medium to severe bilateral pleural effusion which was more pronounced in the posteroanterior right lung (figure 1). 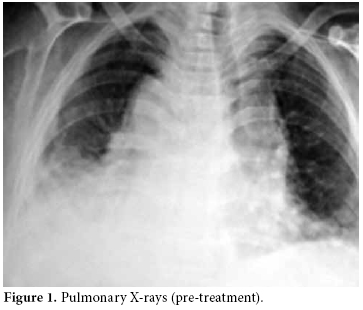 In high resolution computed tomography (HRCT) there was linear atelectasis, and fibrotic changes were found which were more pronounced in the upper lobes of both lungs (figure 2). Mild to severe pericardial effusion was seen in echocardiography (ECHO; figure 3). Three days after 20 mg intravenous prednisolone therapy, fluid accumulation was considered to be gradually decreasing in ECHO (figure 4). 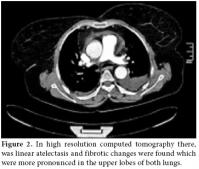 Figure 2. In high resolution computed tomography there, was linear atelectasis and fibrotic changes were found which were more pronounced in the upper lobes of both lungs.
× 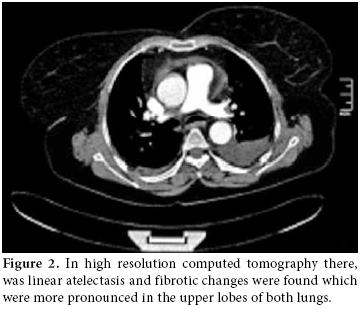 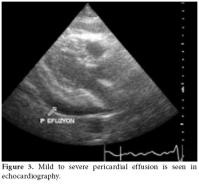 Figure 3. Mild to severe pericardial effusion is seen in echocardiography.
× 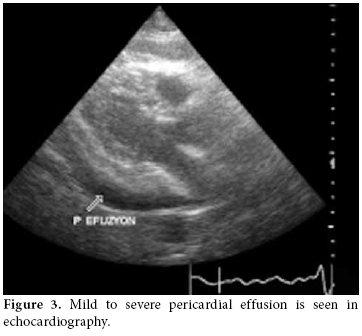 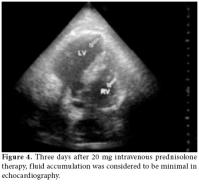 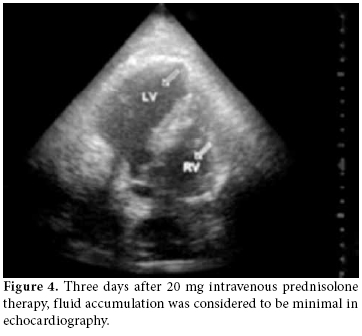 In the light of present findings, it was thought to be a lupus-like syndrome due to the use of sulphasalazine. Twenty milligram intravenous prednisolone therapy was started, and sulphasalazine was discontinued. Five days later, the ECHO results were considered normal, and the patient was admitted to the rheumatology service to continue a rheumatology examination. 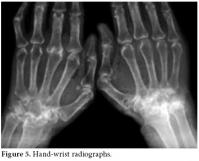 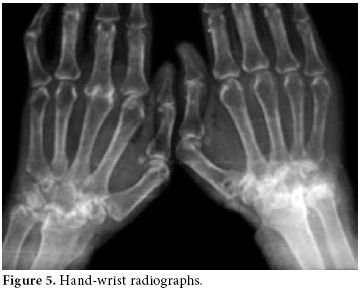 In foot-ankle X-rays, periarticular osteoporosis, hallux valgus, and joint space narrowing had progressed to the ankylosis of tarsal bones (figure 6). 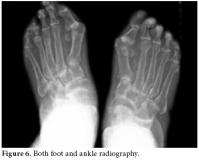 Figure 6. Both foot and ankle radiography.
× 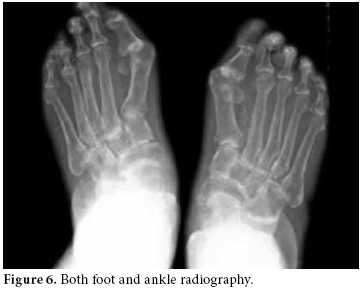 The pericardiocentesis fluid and blood cultures were negative, and the control ECHO was normal in the third and fifth days. The effusion had completely disappeared. Therefore, taking into account all clinical, radiological, and laboratory findings, the patient was diagnosed with DILE due to the use of sulphasalazine. Existing minimal pleural effusion was reported by the pulmonary disease department (figure 7). Liver enzyme and ferritin levels were normal. The other laboratory changes before discharge were as follows: leukocyte count: 18800/mL, Hgb: 12.7 g/dl, CRP: 3.84 mg/L, RF: 37 IU/mL (0-15), ESR: 22 mm/hour, anti-CCP: positive, ANA: negative, anti-histone antibodies: positive, and anti-dsDNA: negative. Urine analysis findings were within normal limits, and the DAS was calculated as 3.06. 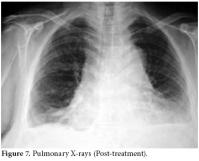 Prior to discharge, the cardiac examination was normal. After discharge, prednisolone treatment was continued at 16 mg/day (orally), methotrexate at 15 mg/week (subcutaneously) along with folic acid at 5 mg/week.

Approximately 50 drugs that may cause lupus-like syndrome have been reported since 1970. Hydralazine, penicillamine, and procainamide are frequently blamed. Similarly, systemic lupus erythematosus (SLE) patients also have been reported as a result of sulfasalazine use.[9-15]

However, diagnosis of DILE in patients with RA is not easy. Because of this, RA and SLE can be found concomitantly.

Sulphasalazine is used quite widely in the treatment of inflammatory bowel disease and rheumatic diseases. It crops components of 5-acetyl salicylic acid and sulfapyridine. Side effects such as reversible sperm abnormalities, pancreatitis, hepatitis, hemolytic anemia (more common in glucose 5-phosphate dehydrogenase deficiency), lung disease, rash, nausea, weakness, and fever can be seen.[16,17]

The underlying mechanisms of DILE caused by the use of sulphasalazine could not be fully illuminated in patients with RA.

In the present case, although the patient had undergone six years of methotrexate treatment, skin rash, shortness of breath, and palpitations began up to three weeks after starting treatment with sulphasalazine.

High titers of ANA may occur during long-term usage of many drugs. However, in drug-induced lupus, the incidence of asymptomatic serological abnormalities is not known exactly.[20] Anti-dsDNA in DILE is mostly negative. However, these antibodies can develop without symptoms in patients with RA under the treatment of sulphasalazine.[11] In a study, the presence of high titers of anti-dsDNA in most patients with sulfasalazine-induced DILE has been reported.[2,8] In addition, the anti-histone antibody became positive in our case while both the ANA and anti-dsDNA were found to be negative. The presence of ANA or anti-dsDNA need not be a reason to cut off treatment unless clinical findings are overt, but careful monitoring is required. Sulphasalazine is separated into sulfapyridine and 5-acetyl salicylic acid after oral administration, and sulfapyridine acetylation is catalyzed by the N-acetyltransferase-2 enzyme in the liver. Individuals who have mutations in the gene encoding this enzyme will have slow acetylation. This situation has led to an increase in side effects. However, this slow acetylation effect does not occur in patients with idiopathic SLE.[6,21]

Gunnarsson et al.[4,6] in their reports discriminated the patients developing SLE and DILE during the sulphasalazine treatment and indicated that the underlying mechanism is the slow acetylation. Therefore, high levels of sulfapyridine were reported to play an important role in the mechanism of DILE.

In our study, no comments could be made regarding this because we did not look for this enzyme in our patient. Cuteneous findings, joint complaints, and serositis are the main clinical features in sulfapyridineinduced DILE.

Arthralgia, fever, and rash have been reported as 33%, 25%, and 88% respectively in drug-induced lupus studies, and severe renal disease has not been reported despite the presence of leukopenia, anemia, vasculitis, and pneumonitis.[22,23]

In our case, there were signs of pleural and pericardial effusion along with the chest pain and palpitations associated with arthralgia, fever, and skin rash. The clinical findings improved dramatically within a week after the discontinuation of sulphasalazine and the start of corticosteroid therapy.

In conclusion, the following can be surmised from in this case;

• While receiving methotrexate treatment, the emergence of symptoms of cardiac disease occurred after the addition of sulphasalazine

• Positive cultures were not found in pericardial effusion nor in the blood culture.

• When symptoms of cardiac disease occur in a patient with RA, it should be kept in mind that cardiac involvement is associated with sulphasalazine, and medication should be discontinued immediately.