Normally, the cause of medial tibial stress syndrome is the overloading of the tibia as seen frequently in athletes and military recruits. This case report describes a physically inactive 49-year-old male patient suffering from psoriatic arthritis with the classic symptoms associated with medial tibial stress syndrome. The symptoms were due to the use of methotrexate and ceased by lowering the dosage.

Medial tibial stress syndrome (MTSS) is a common injury of the lower leg caused by over usage. For years it was thought to be due to periostitis.[1,2] However, a recent review showed that it is more likely that MTSS is caused by bony overload.[3] There are four important findings that support the theory that bony overload forms the primary pathophysiological basis for MTSS. First, on triple phase bone scans, the last phase is abnormal indicating that the bone and periosteum are involved.[4,5] Next, on high resolution computed tomography (CT) scans, the tibial cortex is found to be osteopenic, as can be seen as bone remodeling in both patients and asymptomatic athletes.[6] Another finding that supports this theory is that on magnetic resonance imaging (MRI), bone marrow edema as well as a signal along the periosteum can be seen.[7,8] Finally, in patients with MTSS, the bone mineral density is reduced when compared with controls.[9] When symptoms improve, the bone density returns to normal values.[10] Normally, the bony overload is caused by the repetitive loading of the tibia in athletes and recruits.

This case report describes a patient with psoriatic arthritis who had not repetitively loaded the tibias, but still had the classic symptoms and signs of MTSS. The possibility that the use of methotrexate could lead to methotrexate osteopathy and, therefore, insufficiency fractures, has been presented in a previous case series.[11] That is why for this case report, it was proposed that the patient's MTSS was due to the methotrexate used in the treatment of the psoriatic arthritis.

A 49-year-old male was presented at the outpatient department of a sports medicine center in the Netherlands. He complained of a two-year history of pain in the right shin not only while walking, but also while resting. The pain was felt on the medial and sometimes lateral side of the leg and could be present at night. As a prior treatment he had rested his shin, but this did not relieve his pain symptoms.

He was diagnosed with psoriatic arthritis in 2006, for which he had used methotrexate 10 mg per week for the past three years. This had proved to be an effective treatment, and he had no complaints of his psoriatic arthritis at the time of presentation. Apart from hypertension, he had no other past medical history. He swam twice a week but did not perform any other excessive physical exercise and had a sedentary profession.

A physical examination revealed no local abnormalities and a normal alignment of the legs and feet. On palpation, the posteromedial border of the tibia was tender over a length of 10 centimeters. The patient recognized the pain as being the same as he usually suffered. Resistance testing of the posterior tibial muscle and the plantar flexors of the foot was not painful. Some pain was felt on performing the resistance test of the peroneal muscles. The ankle and knee had a normal range of motion and were stable upon the assessment of the ligaments. To differentiate from hypertrophic osteoarthropathy and primary hyperparathyroidism, no clubbing of the fingers, hypertrophic skin changes, or palpable masses in the neck were observed. A laboratory analysis revealed the following: calcium 2.13 mmol/l, phosphate 1.24 mmol/l, albumin 44 g/l, ASAT 37 U/l, ALAT 34 U/l, CRP <3 mg/l.

An MRI scan of the right lower leg was performed. The T2-weighted, fat-suppressed images revealed bone marrow edema of the right tibia (figure 1). No periosteal edema was present, and no fracture line was visible. No hyperintense signal or other abnormalities were found in or surrounding the peroneal tendons. 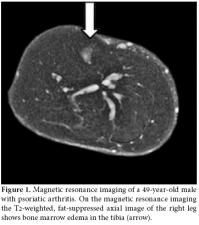 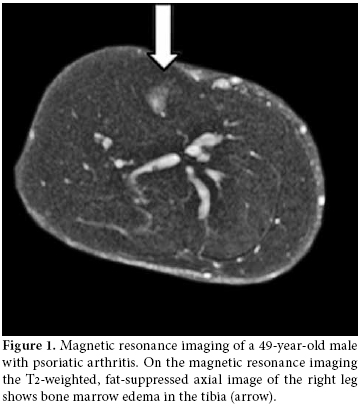 The diagnosis of MTSS was made by a sports medicine physician who referred the patient back to a rheumatologist who specialized in psoriatic arthritis. The methotrexate dosage was lowered from 10 mg per week to 7.5 mg per week, and within two weeks, the complaints had disappeared. After three months, he developed symptoms of psoriatic arthritis of the right proximal interphalangeal (PIP) joints. After six months, the methotrexate dosage was increased to 10 mg/week again, and the PIP joint complaints disappeared. There was no recurrence of his shin pain.

This case report presents a patient with MTSS which was not caused by excessive axial loading of the tibia but which was likely due to methotrexate osteopathy. The diagnosis of MTSS in this patient was made clinically according to the criteria by Yates and White[12] and also confirmed using an MRI. The abnormalities on the MRI in MTSS patients have been previously described by different authors.[4,7,13] On T2-weighted images, periosteal edema and/or bone marrow edema can be seen.

Methotrexate osteopathy is an uncommon side effect of methotrexate usage.[11,14-16] Alonso-Bartolome et al.[17] described two cases in which MTSS was caused by patients' use of methotrexate. In their report, the methotrexate was discontinued after the side effect was recognized, and bisphosphonates were started. With this treatment regimen, one of the patients with MTSS was asymptomatic within one week, and the other patient was without symptoms after four weeks. This is in keeping with the findings in our case report in which symptoms disappeared within two weeks of the lowering of the methotrexate dosage. Due to the findings in their study, Alonso-Bartolome et al.[17] suggested that there may be a relationship between methotrexate and MTSS.

Several reports have described the influence of methotrexate on bone tissue. Back in 1965, Nevinny et al.[18] described the effects of the short-term usage of methotrexate in humans. They found increased calcium and phosphate levels in the urine and feces suggesting increased bone turnover along with osteoclast activity. An animal study from the eighties showed that bone turnover rates were about 60% lower due to the use of methotrexate. In this study, reduced volume and thickness of the osteoid was also found.[19] These findings were confirmed in humans in the study by Preston et al.[20] in which the osteoid thickness and bone formation rate were also decreased by the use of methotrexate. A recent in vitro study found that osteoblast proliferation was not impaired by methotrexate, but that osteoblast cellular activity and mineralization capacity were suppressed.[21] In MTSS, bone turnover processes are also altered[22,23] so that the local bone density is decreased.[9]

Although MTSS is normally caused by extensive axial leg loading, this case report shows that methotrexate can induce the same clinical entity. Rheumatologists should also be aware that primary hypertrophic osteoarthropathy and primary hyperparathyroidism can also cause leg complaints.[24,25] Clinicians such as oncologists and rheumatologists should be alert that in patients treated with methotrexate, the cause of lower leg complaints can be MTSS. This overuse syndrome is commonly seen by sports physicians and orthopedic surgeons but is seen less frequently by other specialists. The diagnosis can be made using a simple clinical examination with recognizable tenderness along the posteromedial tibial border and with an MRI. Lowering the methotrexate dosage or discontinuing its use altogether alleviates the symptoms of MTSS.