Objectives: In this study, we evaluated the serum levels of a serum TNF-related weak inducer of apoptosis (TWEAK) and anti-citrullinated protein antibody (ACPA) and investigated the possible correlation of these parameters with disease activity, cytokine levels and anti-TNF-alpha treatment in patients with rheumatoid arthritis (RA).

Patients and methods: Fifty-one patients with RA (39 females and 12 males) and 25 healthy controls were enrolled in the study. Of these, 22 patients were on anti-TNF-alpha and 29 were solely on disease-modifying anti-rheumatic drugs. Serum TWEAK, anti-ACPA [anti-modified citrullinated vimentin (MCV) and anticyclic citrullinated peptide, (CCP)], TNF-alpha, and interleukin-1 levels were determined by enzyme-linked immunosorbent assay (ELISA). The disease activity of RA was assessed according to Disease Activity Score 28 (DAS28). Radiographs were scored according to the modified Sharp methods.

Conclusion: Our study has shown that levels of anti-MCV and anti-CCP are higher in RA patients than in controls, and these also correlates with the modified Sharp scores. TWEAK levels were similar for RA patients receiving different medications and the controls.

Rheumatoid arthritis (RA) is an autoimmune disease characterized by inflammation of synovial tissue and destruction in the joints. Treatment and early diagnosis of RA are very important. Therefore, specific laboratory tests are desirable to help in identifying early RA. Autoantibodies to citrullinated proteins [anti-perinuclear factor, anti-keratin antibodies, anticyclic citrullinated peptide (anti-CCP), and anti-Sa (vimentin)] have been described in other studies.[1] These antibodies may serve as a powerful serologic marker for early diagnosis and prognostic prediction of RA.[2,3] While the specificity of these tests is above 90%, sensitivity varies between 33% and 87.2%.[1] Recently, studies have been reported that are associated with the poor radiographic prognosis of anti-mutated citrullinated vimentin (anti-MCV).[4,5]

The cytokine tumor necrosis factor (TNF)-related weak inducer of apoptosis (TWEAK) is a new member of the TNF family. It is known that TWEAK induces the production of cytokines that are involved in the pathogenesis of RA.[6] Anti-TNF-alpha treatment has been associated with dramatic improvements in the clinical signs and symptoms of RA.[7] However, some patients respond poorly to anti-TNF treatment. New TNF family members may explain this issue. In a recent study, it was reported that serum TWEAK levels in patients with RA were correlated with disease activity, and these significantly decreased with anti- TNF-alpha treatment.[8]

In this study, we investigated the serum levels of TWEAK, anti-CCP, and anti-MCV in patients with RA and attempted to determine whether the aforementioned parameters are associated with disease activity, levels of cytokines (TNF and interleukin-1 (IL -1), and anti-TNF-alpha treatment.

This study was conducted on patients with RA admitted to our polyclinic between June 2008 and October 2008. Fifty-one RA patients and 25 healthy volunteers were enrolled in this study. All patients were adults over the age of 16 and had a definite diagnosis of RA according to the American College of Rheumatology (ACR) 1987 revised criteria.[9] The patients with RA (n=51) underwent physical examinations, and their clinical characteristics were recorded. Informed consent was obtained before the examination, and the local ethics committee of the university granted approval for the study. Controls (n=25) were matched to the patients with RA by age and gender. Forty-two RA patients were receiving treatment with the single or combined disease-modifying antirheumatic drugs (DMARDs) methotrexate, sulfasalazine, and lenfluamid alone or taking them in combination with corticosteroids (≤10 mg/day). Twenty-two patients with RA were on anti-TNF-alpha treatments (etanercept, adalimumab and infliximab). These patients responded to the anti- TNF-alpha treatment [(improvement of >0.6 in Disease Activity Score 28 (DAS28 score)]. Thirteen out of the patients on anti TNF treatment were also receiving DMARDs.

At the time of the blood sample collection, the disease activity of patients with RA was assessed according to the 28-joint count DAS28 using the number of swollen and tender joints. Radiographic assessments of hands and feet were performed using the van der Heijde modified total Sharp scores (mTSS).[10] Radiographs were scored by two specialized radiologists who shared information about the study protocol. The mean score of two readers was used for analyses.

Statistical analysis
The results are expressed as mean ± standard deviation (SD). Variables were tested for normal distribution using the Kolmogorov-Smirnov test. Comparisons between the two groups were performed using Student's t-test (parametric analysis) and the Mann-Whitney U-test (non-parametric analysis). A comparison among groups was performed using the Kruskal-Wallis test and one-way analysis of variance (ANOV A) followed by a post-hoc test adjusted with a Bonferroni correction. Pearson correlation coefficients were calculated. Because TWEAK levels have a skewed distribution, they were logarithmically transformed. A P value of <0.05 was considered to be significant.

Demographic, clinical, and serological data of the patients with RA and the controls are given in table 1. Of the 51 patients in the study, 22 were receiving anti- TNF-alpha (group 1) and 29 only DMARDs (group 2). The average treatment duration of the patients with RA was 7.3±4.9 years. The average DAS28 scores of these patients were 3.5±1.3. In this study, the mean age in the patients with RA and the controls was 46.7±13.6 and 45.7±12.1 years, respectively. The RA patients also had significantly higher mean C-reactive protein (CRP) and erythrocyte sedimentation rate (ESR) levels than the healthy controls. Thirty-seven (72.5%) of the 51 patients with RA had anti-CCP >25 U/ml. There were no significant differences in age, gender, duration of disease, ESR, CRP, DAS28, or rheumatoid factor (RF) between the anti-TNF-alpha group 1 and the DMARD group 2 (table 2).

Table 1. Clinical characteristics of patients with rheumatoid arthritis and controls
× 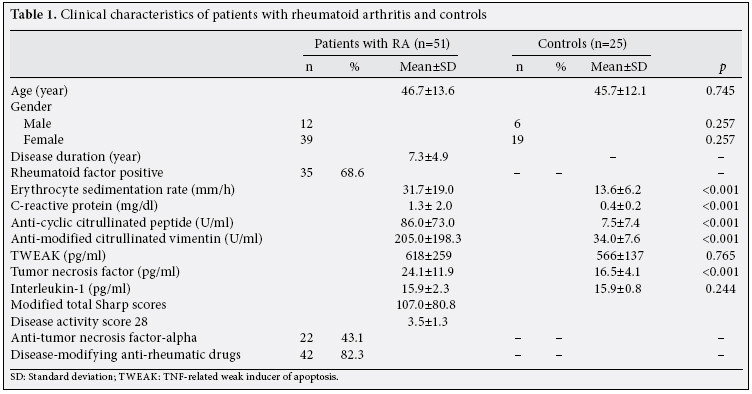 Table 2. The comparison of groups on different medications and controls
× 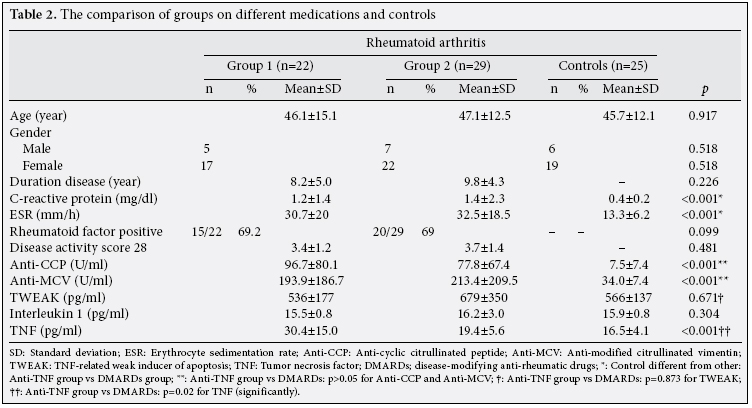 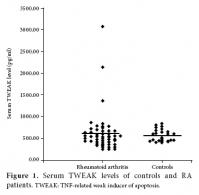 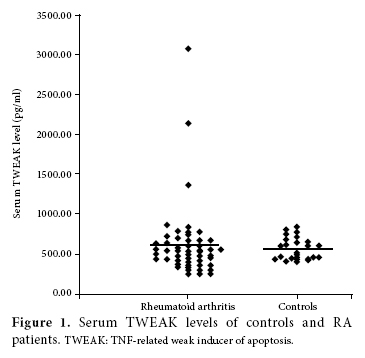 Rheumatoid factor , which is included as part of the criterion in the ACR classification criteria for RA, is classically used as a serologic indicator of RA.[9] It has low specificity for RA and may also be found in many diseases. Currently, available data suggests that the diagnosis of RA can benefit from testing for antibodies to citrulline-containing peptides. Anti- CCP and anti-MCV are included in the peptides. They have shown an excellent diagnostic value for RA diagnosis. There have been several reports that anti-CCP might be a predictive marker for the progression of joint destruction.[11,12] In the report of Kroot et al.,[13] anti-CCP was positive in 70% of 273 patients with early RA (less than 1 year), and patients with anti-CCP developed significantly more severe radiological damage after six years of follow-up. The Sa autoantigen can be found in the inflamed synovium of patients with RA, and anti-Sa response is directed against citrullinated vimentin.[14] Studies have shown that anti-CCP assay appears to be superior to the anti-MCV test in the diagnostic performance of RA.[2,3]

In their study which followed patients with early RA, Mathsson et al.[4] reported that changes in the anti-MCV level showed a stronger correlation with changes in clinical parameters than it did with changes in the anti-CCP level. The presence of anti-MCV was predictive of subsequent high disease activity and continued radiographic progression in early RA. Also, anti-MCV seems to perform better than anti- CCP in detecting poor radiographic prognosis. In that study, Mathsson et al.[4] has reported that the analysis of anti-MCV yields greater sensitivity and unchanged specificity compared with the analysis of anti-CCP. Similarly, Boire et al.[5] reported that anti Sa/vimentin antibodies had better prognostic markers of radiographic destruction than did anti- CCP and RF.

It is now recognized that in established RA patients the chronic inflammation in the synovium is likely to be self-perpetuated by synovial macrophages and fibroblasts through cytokine mediators, including TNF, IL -1, IL -6, and others. The macrophage-derived TNF is considered a more upstream player due to its ability to induce the production of other cytokines in synovial fibroblasts, thus underlying the effectiveness of anti-TNF-alpha in studies.[15] TWEAK is a member of the TNF superfamily of structurally-related cytokines and is a secreted protein with cytotoxic and proinflammatory activities. TWEAK was also shown to act as a growth factor by inducing the proliferation of endothelial cells.[16] However, little is known about the effect of anti-TNF-alpha on TWEAK expression. Park et al.[8] reported that serum levels of TWEAK were significantly elevated in patients with RA, and indicated a short-lived response to anti-TNF-alpha. However, in anti-TNF-alpha non-responder patients, the serum TWEAK levels were reported to remain unchanged.[8] In a recent study, TWEAK and its fibronectin (FN) receptor were found to be expressed in the inflamed synovium of RA and psoriatic arthritis patients. Of particular interest was the fact that TWEAK and FN expression were unchanged after four weeks of anti-TNF-alpha treatment.[17]

In our study, when the patient groups and controls were compared for anti-MCV and anti-CCP, there was a statistically significant difference. The anti-MCV levels showed a significant correlation between anti-CCP and the mTSS, but there was no correlation with the serum TWEAK levels. Also, there was a significant association between anti-CCP and the mTSS. Our findings are consistent with those of Mathsson et al.[4] Contrary to relevant literature, the serum TWEAK levels of the RA patients were not significantly different from those of the controls. In Turkey, anti-TNF treatments are applied to those patients resistant to combined DMARDs therapy and with high disease activity (DAS28 score >5.1). About half of the study population was on anti-TNF-alpha therapy. These therapies may cause a reduction of serum TWEAK levels. This may also explain our findings which are contrary to the current literature that shows a slightly higher, but non-significant difference of serum TWEAK levels in patients with RA.

Although there are similar studies in the literature, one of the novel aspects of our study is the high number of patients on anti-TNF-alpha treatment in our series. Our patients had been receiving this treatment for at least five months. One limitation of this study is that we had no pretreatment data prior to the series.

In this study, we detected similar serum TWEAK levels in the patients with RA and the controls, and the levels of anti-MCV and anti-CCP were determined to be higher in the RA patients than in the controls. Also, these citrullinated peptides were correlated with mTSS. However, future comprehensive studies are needed for more conclusive evaluation of serum TWEAK, anti- CCP, and anti-MCV in RA patients.