Objectives: In this study, we investigated the association of the human glucocorticoid receptor gene (NR3C1) Bcl-1 CG polymorphism with clinical data and response to therapy among rheumatoid arthritis (RA) patients and healthy control subjects.

Results: The genotype frequencies of the NR3C1 Bcl-1 polymorphism did not differ between the patients with RA and the controls. We detected a deviation from the Hardy- Weinberg equilibrium in the RA group for the alleles tested (Rap=0.044, Kp=0.554). However, there was no significant difference between genotypes regarding age, gender, disease duration, or clinical parameters such as DAS28 scores, VAS and HAQ values (p>0.05).

Rheumatoid arthritis (RA) is a chronic inflammatory disease of unknown etiology characterized by chronic synovitis which often results in joint destruction.[1] Glucocorticoids are used to treat a wide variety of inflammatory diseases, including RA, auto-immune diseases, allergies, and asthma.[2,3] Glucocorticoids bind the glucocorticoid receptor (GR), also denoted as NR3C1, in the cytosol. They activate the cytosolic GR which translocates to the nucleus to regulate the target gene transcription and determine the reduction of synthesis and release of proinflammatory cytokines.[4,5] In clinical observations, a considerable variability among subjects is seen in their sensitivity to glucocorticoid therapy, both with regard to efficacy and to the prevalance and severity of side effects.

The human GR gene is one locus on chromosome 5q31-32. An NR3C1 diallelic single nucleotide polymorphism, Bcl-1, has been reported to distinguish individuals with the highest GC sensitivity.[6] The aim of the present study was to investigate the association between the NR3C1 gen (Bcl-1-CG) polymorphism and the response to therapy among RA patients and healthy control subjects.

Sixty-five patients with RA and 70 unrelated healthy controls were enrolled into this study. The patients with RA were divided into two groups as anti-TNF-alpha and DMARD groups. Thirty-five patients received anti-TNF-alpha therapy (either etanercept 25 mg subcutaneous twice weekly or infliximab 3 mg/kg infusion at weeks 0, 2, 6, and then every 8 weeks and 30 patients received disease-modifying antirheumatic drugs (DMARDs). Corticosteroids and non-steroidal anti inflammatory drugs (NSAIDs) are allowed as adjuvants at the treatment period. The study was approved by the local ethics committee, and informed consent was obtained from all patients. Rheumatoid arthritis patients were diagnosed according to the American College of Rheumatology (ACR) criteria. Disease activity was determined on the basis of defined parameters. The number of tender and swollen joints (28-joint count), duration of morning stiffness (in minutes), global health and disease activity on a 0-100 mm visual analog scale (VAS) and the Disease Activity Score 28-joint assessment (DAS28) were calculated. Functional assessment was carried out using the Health Assessment Questionnaire (HAQ) at baseline and after six months of therapy.[7] 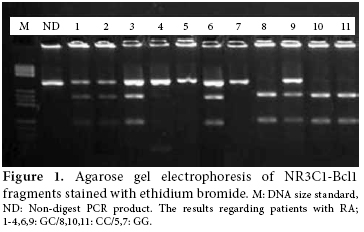 Statistical analysis
The data analyses were performed using the computer software SPSS for Windows version 13.0 (SPSS Inc., Chicago, Illinois, USA). The statistical significance of the differences between the patient and control groups was estimated by logistic regression analysis. Adjusted odds ratios (ORs) were calculated with a logistic regression model that controlled for gender and age and was reported at 95% confidence intervals (CI). Differences in Bcl-2 allele frequencies between the control group and patients were compared with a chi-square test and, when needed, Fisher’s exact test was used. The Hardy-Weinberg equation was used to calculate the estimated genotype frequency and experienced genotype frequency. For statistical comparison of groups, the Mann-Whitney U-test was used. A p-value of less than 0.05 was considered statistically significant.

The demographic characteristics of the patients and their responses to treatment after 24 weeks of therapy are shown in table 1. The mean age of the patients in the anti-TNF-alpha, DMARD, and control groups did not differ significantly [50 (38-65) in anti-TNF-alpha the etanercept group, 47 (29-78) in the DMARD group and 50 (29-76) in the control group]. Mean disease durations were similar in the anti-TNF group (9.5±10.4 years) and in the DMARD group (7.5±8.7 years). The mean VAS and HAQ score were not significant in either group. At six months, the mean DAS28 improvement was not significant among the groups (p=0.051).

Table 1. Main demographic and clinical characteristics of the rheumatoid arthritis and control subjects
× 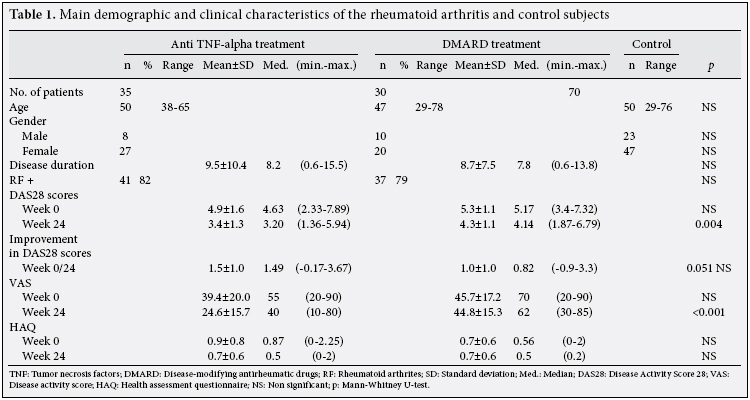 Genotype frequencies of the NR3C1 Bcl-1 polymorphism did not differ between the patients with RA and the controls (table 2). We detected a deviation from the Hardy-Weinberg equilibrium in the RA group for the alleles tested (Rap=0.044, Kp=0.554).

When we considered the correlation between allelic distribution of the NR3C1 Bcl-1 polymorphism and clinical parameters such as the DAS28 scores, VAS, and HAQ values, we didn’t find also any statistical significance among the groups (table 3).

Although glucocorticoids are successfully used in the treatment of a wide range of rheumatic and other inflammatory diseases, few patients with these diseases show a poor response or absence of response to even high doses of glucocorticoids.[8-10] The molecular basis of generalized glucocorticoid resistance has been ascribed to mutations in the hGR gene, which impair one or more of the molecular mechanisms of hGR action, thereby altering tissue sensitivity to glucocorticoids. Several polymorphisms of the gene which might have an impact on glucocorticoid sensitivity have been reported.[11-14]

In this report, we didn’t determine any significant differences in the NR3C1 Bcl-1 polymorphism among the RA patients or healthy controls. Also, there was no correlation between the clinical parameters of RA and the polymorphisms. The results of this analysis may be related to the fact that the patients belonged to the same area of Turkey. Most of the RA patients in our group had high disease activity which may be related to the lack of regular admittance of patients to clinics or to inappropriate drug use.

Derijk et al,[15] reported a newly identified polymorphism in the hGR gene in exon9beta, in an “ATTTA” motif, was significantly associated with RA. In another study, however, no significant difference was obtained among 198 RA patients and the control subjects when three GR polymorphisms (intron B Bcl-1polymorphism, a ttg insertion/deletion within intron F (rs2307674) and the single nucleotide polymorphism (SNP) lying in the 3' untranslated region of exon 9b).[16] Chatzikyriakidou et al,[17] explored the association among RA susceptibility and the GR-α polymorphisms rs33388, rs33389, Bcl-1, and GR-β variant rs6198 in 136 RA patients. They concluded that the GR-α and GR-β polymorphism are potentially associated with RA susceptibility. In another study, the hGR +647G/C genetic polymorphism was investigated in Korean patients with RA, but no difference between the RA and control groups was reported.[18] Our results support most of the previous reports, but, as far as we know, this is the first study which compares the clinicial severity of RA and NR3C1 gene polymorphisms.

Another heavily-studied autoimmune disease is systemic lupus erythematosus (SLE). Lee et al,[19] showed a single mutation in exon 9 of the GR gene in 11/132 (8.3%) of 66 patients with SLE whereas no mutations were detected in 52 healthy individuals.

The variation in time required to obtain the cessation of proteinuria in children with nephrotic syndrome represents one aspect of the variations shown by these children in response to glucocorticoid therapy. In a study which consisted of 118 children with nephrotic syndrome, the Bcl-1 polymorphism was assessed, and the GTA haplotype was found to be associated with a higher sensitivity to steroid treatment as determined by time to proteinuria resolution.[20]

The glucocorticoid receptor gene NR3C1 has been widely studied in other inflammatory and autoimmune diseases, such as cystic fibrosis, asthma, and Graves ophthalmopathy.[21-23]

In conclusion glucocorticoid resistance is important in several inflammatory diseases, including RA, and this complicates their clinical management. The glucocorticoid receptor polymosrphism Bcl1-CG may be one of the gene candidates for ethiopathogenesis and response to treatment with glucocorticoids. The authors suggest that further studies are needed to better elucidate the relationship between GR variants and RA.