Objective: Ultrasound therapy is commonly employed in the treatment and management of soft tissue pain. The aim of this study was to investigate the effectiveness of ultrasound therapy in cervical myofascial pain syndrome (MPS).

Materials and Methods: A total of 55 patients with cervical MPS were included in this study. The patients were randomly assigned into two groups. In Group 1 (n=28), ultrasound diathermy was administrated over three trigger points bilaterally for 8 minutes (min) once a day for 15 days over a period of three weeks. In Group 2 (n=27), the same treatment protocol was given, but the ultrasound instrument was switched off during applications. All patients in both groups performed daily isometric exercise and stretching exercises for the cervical region. Parameters were measured at baseline, and at weeks 4 and 12. All patients were evaluated with respect to pain (at rest and movement) and assessed by visual analog scale and active range of motion was measured using an inclinometer and a goniometer. Disability and quality of life were evaluated with the Neck Disability Index (NDI) and the Nottingham Health Profile (NHP).

Results: In both groups, statistically significant improvements were detected in all outcome measures at weeks 4 and 12 (except sleep and social isolation subgroups of NHP in both groups) compared with baseline (p<0.05). However, improvement in NDI and pain and physical abilities subgroups of NHP was better in Group 1. Pain reduction evaluated with respect to pain at rest and movement was also better in Group 1.

Conclusion: The results of our study showed that ultrasound therapy is effective in the management of cervical MPS. (Turk J Rheumatol 2010; 25: 110-5)

Myofascial pain syndrome (MPS) is a soft tissue rheumatism or a regional pain syndrome characterized by the presence of trigger points in muscle and/or fascial bands and development of pain, sensory changes and local twitch response reflected by stimulation of these points[1].

In most cases, due to a stiff trapezius muscle, neck and upper back pain is the most common complaint in MPS. The prevalence of this syndrome has increased dramatically in recent years and is foremost among the causes of musculoskeletal pain. The aim in the treatment of MPS is to inactivate the trigger point and loosen the tight muscle bands. The goal is to reach normal muscle length, function and power by decreasing the muscle tension[2,3].

Thermal and non-thermal effect occurs in tissue during the US treatment by using high-frequency acoustic energy. During the absorption of ultrasonic waves in tissues and their reflection among the surfaces, heat energy is produced and provides deep heating. It has been found from US studies that US causes a significant increase in the intraarticular temperature. At the same time, US therapy has analgesic effects, increases nutrition and also speeds blood circulation. In addition, the micro-massage effects of high-frequency sound waves have been demonstrated[5]. However, placebo-controlled double-blind studies evaluating the efficacy of US are rather limited.

The purpose of this study was to investigate the efficacy of US treatment in patients with cervical MPS.

1. Regional pain complaint in the neck.

2. Pain complaint or altered sensation in the expected distribution of referred pain from a myofascial trigger point.

4. Excruciating spot tenderness at one point along the length of the taut band.

5. Some degree of restricted range of motion (ROM), when measurable.

1. Reproduction of clinical pain complaint, or altered sensation, by pressure on the tender spot.

3. Pain alleviated by elongating (stretching) the muscle or by injecting the tender spot (trigger point).

Cervical MPS was diagnosed with five major criteria and at least one minor criterion. All the patients included in the study were asked not to take any analgesic medication during the follow-up. Patients were divided randomly into two treatment groups. Random sampling method was performed using numbered envelopes.

Ultrasound (US) treatment was performed with Enraf- Nonius Sonopuls 590 device. In Group 1 (n=28), US was performed every three trigger points bilaterally to cover the trapezius muscle over 8 minutes (mins) (1.5 watt/cm² dose, 1 MHz frequency, continuous mode US) during a session every day, for a total of 15 sessions (in a 3-week period). In Group 2 (n=27), the same treatment protocol was given, but the US instrument was switched off during applications. All patients in both groups performed daily isometric exercise and stretching exercises for the cervical region under the supervision of the physiotherapist. All US applications were carried out by the same physiotherapist.

One of the doctors evaluated the clinical parameters before the initiation of treatment. After the treatment, results were evaluated by the other doctors. All physicians were blinded to the treatment. Only physiotherapists (not included in the study) knew the treatment and applied this treatment to the patient. Evaluation parameters were measured at the beginning of the study and after 4 and 12 weeks.

The NHP consists of two parts, but only the first part was utilized in this study. The first part includes six fields (pain, physical abilities, emotional reactions, energy, social isolation and sleep) and 38 yes/no questions. NHP scores range from zero (no problem) to 100 (presence of all the problems in an area). The NHP Turkish version was used in this study[7].

Informed consent was obtained before the examination and the study received approval from the local ethics committees of the Kocatepe University.

Statistical Analysis
A value of p<0.05 was considered significant for the study. The average percentage changes in values of both groups were compared using the Mann-Whitney U test. Paired t-test was used for comparison of values within groups before and after treatment. The chi-square test and Fisher's exact test were used for comparison of categorical variables. All analyses were performed using the SPSS 13.0 for Windows.

All patients completed the study, and no side effects were observed. There were no statistically significant differences in pre-treatment parameters between the groups. Demographic characteristics and pre-treatment evaluation parameters are shown in Table 1. 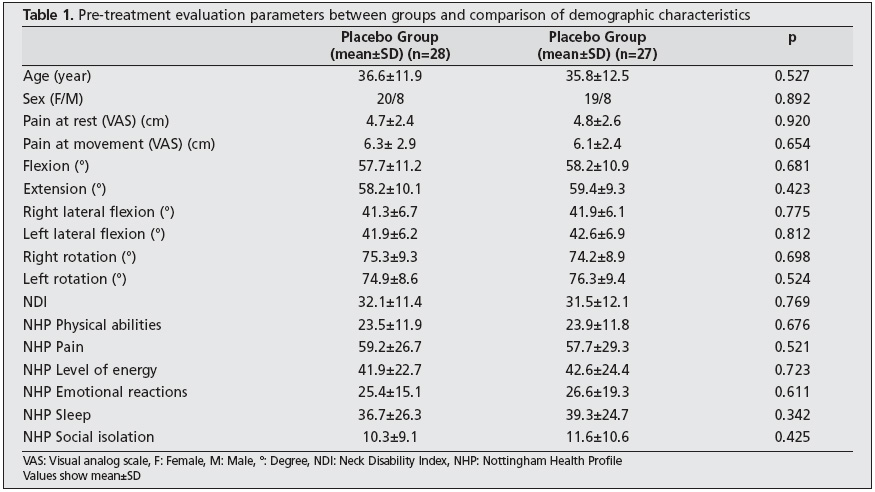 Significant improvements were observed in all parameters in both groups (except for NHP sleep and social isolation subgroups) at the end of the 4th and 12th weeks (Tables 2, 3). 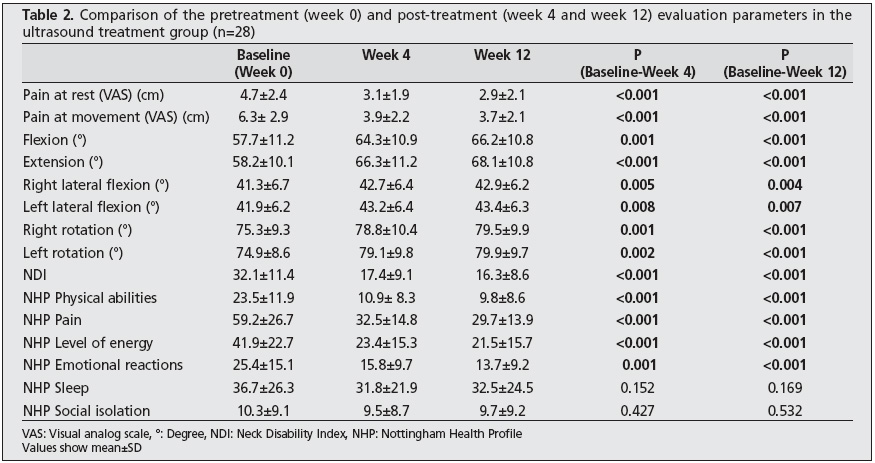 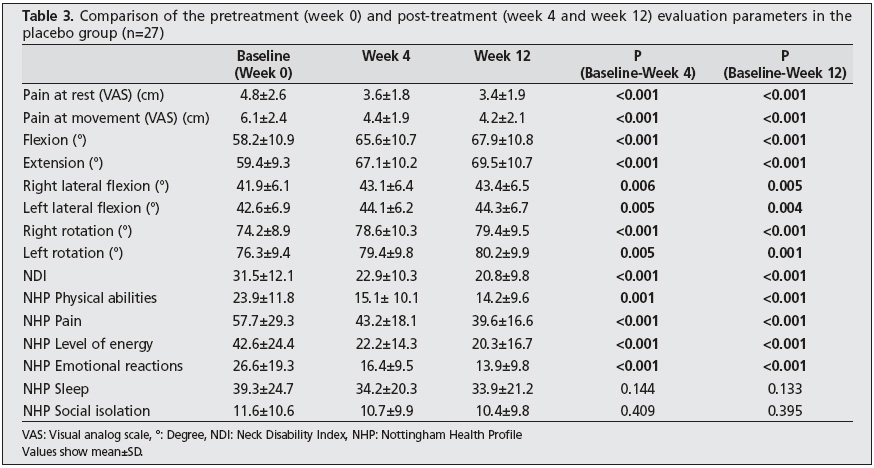 Table 4. Comparison of the two groups on the basis of the post-treatment (week 4 and week 12) percentage changes and difference in scores relative to pre-treatment (week 0) values
× 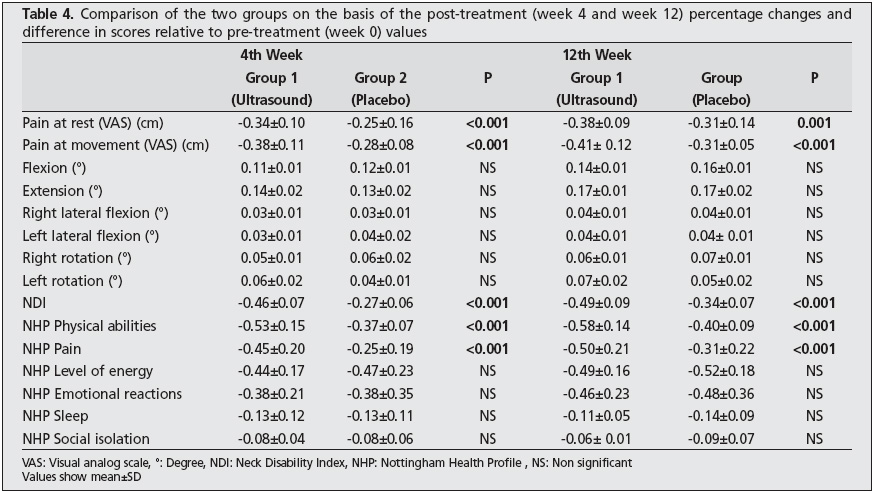 The use of US therapy in the treatment of musculoskeletal disorders is not new. While US therapy has been used for the treatment of pain and disability for many years, the number of placebo-controlled doubleblind studies showing the effectiveness of US treatment is negligible. Furthermore, contradictory results have been reported in some of the existing studies. US therapy in both periarticular calcific tendinitis and in the presence of inflammation has been shown to be beneficial in the analysis of two compilations in the literature[9,10]. In other compilations (2 related to the use of US in osteoarthritis, 1 regarding use of US in patellofemoral pain), US treatment has been reported to be ineffective[11-13]. In this review, the literature was searched for studies of US treatment, and most of the current studies indicated its low quality. However, some recent studies showed that US therapy could be used in the inactivation of trigger points in MPS. In two placebo-controlled studies, Srbely and colleagues[14,15] showed that low doses of US treatment increased pain pressure threshold and reduced sensitivity on the trigger point by creating short-term antinociceptive effects on trigger points. The most important limitation of these studies is that followup included only the first 15-minute period after US treatment in the trigger points, and there was no information about the long-term results. In another doubleblind placebo-controlled study, Majlesi and colleagues[16] reported that high-power US therapy was more successful compared to conventional US therapy in the treatment of trigger points in MPS, and the treatment period was significantly shortened. However, Gam and colleagues[17] performed another study regarding US in the treatment of trigger points in MPS in two groups (massage and exercise therapy with placebo US and massage and exercise therapy with US), and a statistical difference was found between the groups in the evaluation parameters. In our study comparing the US treatment group and a placebo US group, statistically significant improvements were identified with US treatment in the majority of the evaluation parameters (pain at movement and at rest, NDI and NHP pain and physical capabilities subgroups), and improvements were sustained up to the end of the third month.

Some theories on the effectiveness of US treatment in pain control in MPS have been suggested, including: increased blood flow depending on the pain-causing mediators to be removed from the environment[18], nerve conduction changes or cell membrane permeability changes depending on the reduction in inflammation[19], increased capillary density in muscle tissue[20], energy consumption improvement in the cell[21], increased angiogenesis in ischemic tissue[22], and acceleration of the healing of tissue and improved persistent muscle spasm[23]. In addition to these mechanisms, stimulation of somatosensory receptors within the trigger points may reduce regional pain sensation, which in turn may decrease the sensitivity of trigger points or even result in their resolution by means of relaxation in tight bands.

In our study, the placebo group had significant improvements in all parameters (except for NHP sleep and social isolation subgroups) as well. Stretching exercise forms the basis of treatment in MPS and diminishes pain by reducing muscle tension, restoring muscle length and deactivating trigger points[24]. Significant improvements observed in both the patients with placebo and the US treatment group could be explained by the effectiveness of the daily stretching exercises and isometric exercise.

The most important limitation of our study is the minimal number of patients in the study group. The US treatment group also did not include different doses and frequency, which reduces the power of the statistical evaluation.

In conclusion, our double-blind placebo-controlled study showed significant improvements in pain, disability and quality of life parameters in MPS with US therapy. New studies are needed regarding the efficacy of US treatment in MPS that include a greater number of patients, and different doses, duration and frequency of US treatment.