Effects of TENS on Pain, Disabiliy, Quality of Life and Depression in Patients with Knee Osteoarthritis

Objective: The aim of this randomized controlled trial was to evaluate the effects of transcutaneous electrical nerve stimulation (TENS) on pain, disability, functional performance, quality of life (QoL) and depression in patients with knee osteoarthritis (OA).

Conclusion: The results of this study suggest that addition of TENS to hotpack and exercise program is more effective in decreasing knee pain and related disability and improving QoL in patients with knee OA. (Turk J Rheumatol 2010; 25: 116-21)

Osteoarthritis (OA) is a degenerative joint disease seen most frequently in adults and characterized by pain and loss of function[1]. Prevalence of OA increases with age and it is most frequently seen in individuals above 65[2].

The aim of the treatment for OA may be summarized as to increase quality of life (QoL) by controlling pain and other symptoms, to protect and recover joint functions, to prevent disability and educate patients. Currently, nonsteroidal antiinflammatory drugs, exercise programs, intraarticular steroid and hyaluronan injection and glucosamine and chondroitin sulphate are widely used in the treatment practice[5].

Transcutaneous electrical nerve stimulation (TENS) is a widely used physical therapy modality. There are few theories related to its mechanism of effect[6]. There is an abundant literature investigating the effects of TENS on pain[7,8]. However, studies investigating the effects of TENS on disability, depression and QoL in patients with OA are limited[9,10].

The aim of this study was to evaluate the effects of TENS on pain, disability, functional performance, QoL and depression in patients with knee OA.

Forty patients aged between 40-70 years and diagnosed as primary knee OA according to the American College of Rheumatology (ACR) criteria were enrolled in the study between June 2007– January 2008. Standing antero posterior and lateral radiographs of both knees were obtained in each patient and the severity of OA in the tibiofemoral compartment was graded according to the criteria of Kellgren-Lawrence by a physiatrist (FA). All patients were examined by the same physician before and after treatment (FA). Demographic data including age, gender, body mass index (BMI) (kg/m2), disease duration, educational level, and job were recorded.

Patients younger than 40 and older than 70, with a serious medical condition (DM, heart disease, uncontrolled hypertension), neuromuscular disease that involves the lower extremities, with a history of previous knee surgery, trauma and physical therapy within the last 6 months, with an implanted cardiac pacemaker, inflammatory arthropathy, contracture or Grade 4 OA were excluded from the study. All patients signed a written consent before the study. The study was approved by the Ethical Committee of the Ondokuz Mayıs University.

Active TENS Group (Group 1)
Elettronica Pagani class1 type BF branded device was used for the TENS treatment. Two electrodes were attached to painful areas in both knees. Stimulation was applied in a conventional mode with a dose tolerated well by the patient with a frequency of 100 Hz, pulse time of 200 and current strength between 20-35 mA. The duration of TENS treatment was 40 min.

Placebo TENS Group (Group 2)
The same TENS device and treatment procedure (eg. duration, attachment of electrodes) were used in the placebo group. The device was switched on with an indicator lamp flashing but no current was given. Patients heard the switching on/off and electronic sounds of time setting procedure of the device. Patients were instructed that they would not feel anything or vibration during treatment sessions.

Clinical Parameters
Pain
Global pain was assessed by the visual analog scale (VAS) on a 0-100 mm line, with higher scores indicating more pain (11). WOMAC pain score was also recorded in all patients (12). Patients were asked to consider their pain when walking on a proper surface, coming down and climbing a ladder, sitting or lying on the bed at night, standing within the last 48 hours. Evaluation scores range between 0-20 and higher values show more pain.

Disability
WOMAC Physical Function Score (WOM-PFS)[11,12]
Patients were asked to report the degree of pain they suffered when coming down a ladder, climbing a ladder, standing up from a chair, standing, bending down, walking on a flat surface, getting on/off a car, going shopping, wearing sock, standing from a bed, taking off sock, lying on a bed, entering and leaving bathroom, sitting, entering and leaving toilet, making hard house works and light house works within the last 48 hours. Evaluation scores range between 0-68, high values show more disability.

WOMAC Stiffness Score (WOM-SS)[12]
Patients were asked about stiffness in their joints when they woke up in the morning and when sitting, lying or relaxing during later hours of day. Higher values indicate increased joint stiffness.

Body Mass Index (BMI)
The BMI values between 20-25 were considered normal, 26-29 overweight and 30 and above obese.

Depression
Depression was assessed by the Beck Depression Inventory (BDI) (13). The BDI is a 21-item test presented in multiple-choice format which purports to measure presence and degree of depression. Responses are made on a four-point, minimally-anchored scale, ranging from 0 to 3, with 3 representing the most severe symptoms.

Functional Evaluation
10 steps stairs climbing up-down time (10SUDT)
Objective assessment of functional performance was done by timing the patients walking as fast as they could for ascent and descent of a straight flight of stairs consisting of 10 steps.

6-minute walk distance
The 6-minute walk distance (6MWD) test was used as a test of objective assessment of functional performance. Subjects were given the same standard verbal instructions before each test and instructed to walk their maximum distance in a 6-minute period. The total distance covered in meters during the 6 minute of walking was used as the score for each session.

Statistical Methods
Normality of the data was evaluated by the Kolmogorov- Smirnov test. Descriptive statistics including percentage, mean±standard deviation or median (minimum-maximum) values were calculated. The socio-demographic characteristics were compared between the groups by chisquare test. Differences between the groups were assessed by Student-t test or Mann Whitney-U test. Differences within the groups were assessed by the Wilcoxon signed ranks test or paired-t test. Variance analysis was done for repeated measurements of WOMAC pain score. Then, co-variance analysis was performed by correcting the 2nd and 3rd time values according to the beginning in each time slot for the same parameter. Significance level was 0.05.

Table 1. Demographic charcteristics of the subjects
× 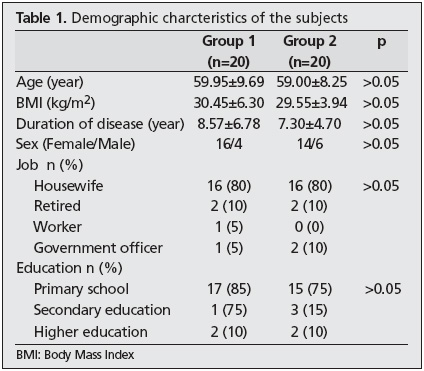 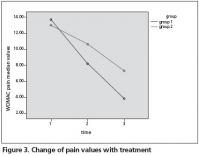 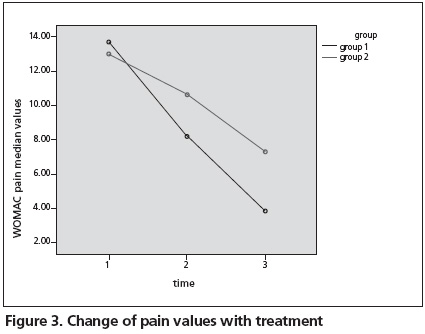 There was a significant increase in functional performance parameters (6MWD, 10SUDT, WOMAC SS) on the 10th day and at the end of treatment in both groups (Table 2). However, when the two groups were compared, the changes were similar (p>0.05) (Table 3).

Table 2. Comparison of clinical parameters in two groups before and after treatment
×

Table 3. Comparison of clinical parameters in two groups after treatment
× 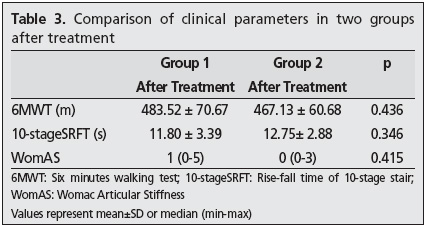 We found a significant improvement in QoL and depression within the two groups (Table 4). However, the active TENS group had a greater improvement in depression and SF-36 parameters except for mental health, energy, emotional role when compared to the control group (Table 5).

Table 4. Assessment of QoL and depression in two groups before and after treatment
×

Table 5. Comparison of QoL and depression parameters in two groups after treatment
× 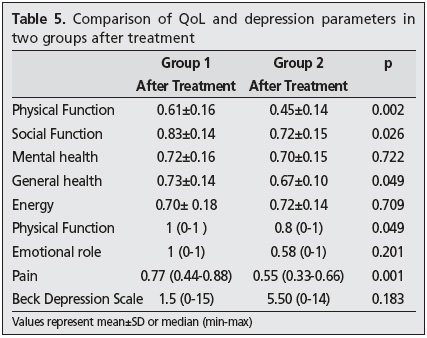 The aim of this randomized controlled trial was to evaluate the effect of TENS on pain, disability, functional performance, QoL and depression in patients with knee OA. At the end of treatment, we found a significant recovery in VAS pain, WOMAC pain, WOMAC PFS and 6MWD, 10SUDT, WOMAC SS, Beck Depression Score and most of the sub-group scores of SF 36 in both groups. However, the improvement in pain, WOMAC pain, disability and sub-scores of SF 36 were better in the active TENS group compared to the control group.

TENS, a well known physical therapy modality is widely used for the treatment of pain caused by OA. Various theories have been suggested for its mechanism of action. These theories include inhibition of nociceptors, blockage of pain transmission in afferent nerves, sympathetic blockage, gate control theory and increase in release of endogen opiates[6]. There is a conflicting evidence in the literature whether the TENS treatment is effective in reducing the pain caused by knee OA[7,8,15,16]. In a panel organized in Philadelphia in 2001, 6 randomized controlled trials investigating the rehabilitation approaches to knee pain were reviewed systematically and the consensus report stated that despite the differences in those studies, TENS is useful in reducing pain and improving global assessment of patient[17].

Taylor et. al. found that TENS was more effective after a 1 month treatment in patients with knee OA compared to the placebo treatment (19). Conversely, two studies reported that TENS was not superior to placebo in decreasing pain but on the long term evaluation, the period without pain was longer in the group receiving TENS[20-22]. In our study, we observed an improvement in pain starting from the 1st week of the treatment and lasting for the 2nd and 3rd weeks with the TENS treatment. However, lack of long term follow-up in our study prevents us commenting on this matter

Osiri et. al.[23] reviewed 7 randomized controlled studies related to TENS treatment in knee OA and evaluated the effects of conventional and acupuncturelike TENS on clinical parameters such as pain and joint stiffness. They concluded that conventional and acupuncture-like TENS are more effective than placebo. Also they suggested that treatment protocols must be standardized with respect to treatment parameters such as electrode placement, treatment duration, and current properties. Cheing et. al.[24] applied treatments of 20, 40 and 60 minutes to search the optimum treatment duration of TENS. They suggested 40 minutes as the optimum treatment duration. In our study, conventional TENS treatment of 40 minutes was administered. Although it is effective in improving pain which is consistent with the literature, its effect on joint stiffness is not superior to the placebo treatment.

In most of the studies regarding knee OA, the focus has been the effect of TENS on pain. Studies investigating its effect on disability, depression and QoL are limited. Bal et. al.[20] evaluated the long term efficiency of TENS on pain and disability and they found the superiority of TENS over placebo. Eyigor et. al.[8] investigated whether the addition of therapeutic ultrasound or TENS to isokinetic exercises increases its effect on pain, disability, functional performance, muscle strength and QoL in patients with OA. They found recovery in patients with the knee OA in terms of pain, functional condition, muscle strength and QoL. Paker et. al.[9] compared hyaluronic acid injection and TENS treatment in knee OA and found them ineffective in terms of QoL. TENS was found to be superior to placebo in some parameters of disability and QoL (physical function, social function, general health and pain) in our study.

Currently, the literature searching the effects of physical therapy modalities is limited and existing evidence is conflicting. Despite this, physical therapy modalities and exercise are widely preferred for the treatment of patients at early stages of OA or advanced cases not suitable for surgery. The results of our study suggest that addition of TENS to hotpack and exercise treatment is superior to placebo in improving pain, disability and QoL in patients with knee OA.