Neck and Low Back Pain Among Dentistry Staff

Objective: To assess low back pain (LBP) and neck pain (NP) frequency in dentistry personel and to assess associated factors with LBP and NP in dentistry.

Locomotor system disorders are frequently seen in dentistry[1]. It is known that the most painful regions are the cervical and lumbar spine[2,3]. Factors associated with professional work may predispose to back and neck pain. On account of the narrow visual field of the oral cavity, having to work with a limited scope of movement constitutes high risks for lowback and neck pain[4]. It has been demonstrated that tensely maintained asymmetric body posture is a risk for lowback pain (LBP); and prolonged static neck position and repeated movements are work-related risk factors for neck pain[5,6].

This cross sectional investigation was planned among the dentists, students and nurses in the Faculty of Dental Medicine of Yeditepe University. Those who had back and neck pain before joining the Faculty of Dental Medicine were excluded from the study as the investigation was focused on effects of conditions and postures on LBP and neck pain. A total of 206 people completed the study. The participitants signed informed consent forms. The study was approved by the ethical committee of the university.

Data were collected by means of a special questionnaire (SQ) designed by the research team, and the use of the Neck Pain Disability Index (NPDI), Roland-Morris Disability Questionnaire (RMQ), and the Visual Analoge Scale (VASscores 0-10).

These questions were scored according to the Likert Scale with 5 points on ‘never’, rarely’, sometimes’, ‘most times’ and ‘at all times’. In order to give the final form, the SQ was tried out for practicability and understandability on 3 randomly selected dentists.

Neck Pain Disability Index (NPDI)
This questionnaire has been widely used and accepted in evaluating the level of disability in patients with neck pain[7]. It consists of 10 parts, seven of which are concerned with daily activities, two parts with pain, and one with concentration problems. Each part presents a choice of 5 scores (0-5), the total score being expressed interms of percentage of the whole with the high values respresenting a higher degree of disability. The reliability and validity of Turkish version of the NPDI has been demonstrated[8].

Roland-Morris LBP and Disability Questionnaire (RMQ)
This is an individaully completed questionnaire that consists of 24 questions with high scores respresenting high degree of disability[9]. Its reliability, validity and sensitivity to changes in time has been shown. The reliability and validity of the Turkish version has been demonstated[10]. 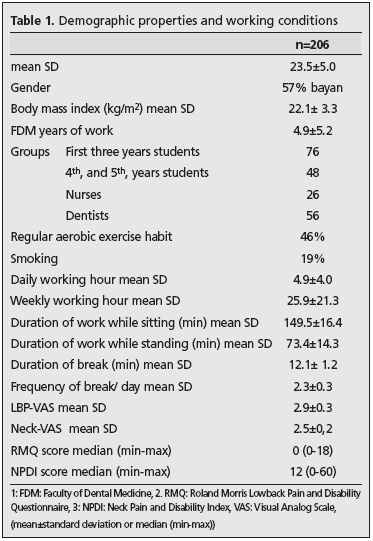 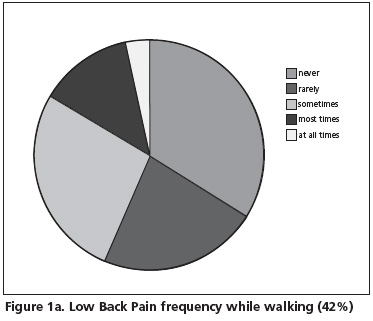 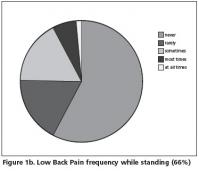 Figure 1b. Low Back Pain frequency while standing (66%)
× 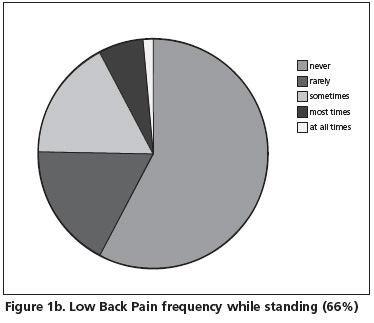 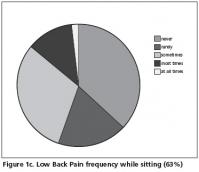 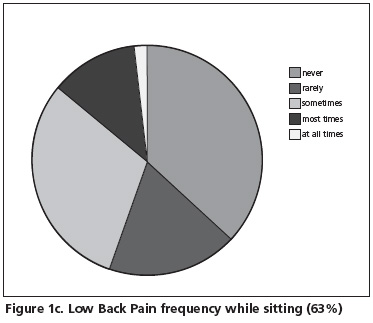 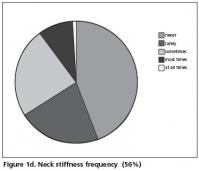 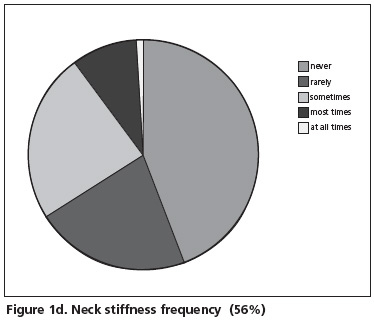 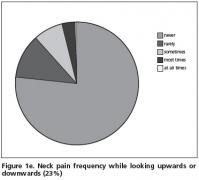 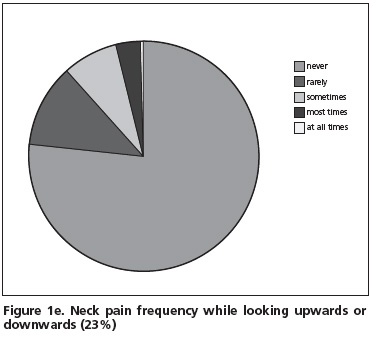 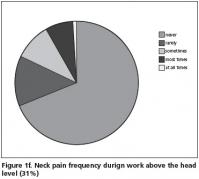 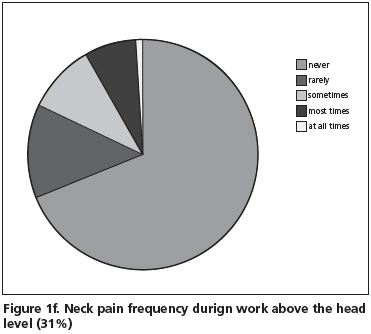 Exprimental parameters
The VPS scores for LBP and neck pain, the NPDI scores and the RMQ scores have been shown in Table 1.

Comparisons of the experimetal parameters and the demographic details on the basis of age groups
The participatants were divided into two groups; above and below the age of 25 years. The cut-off value was selected as 25 since the more actively working group, consisting of the specialised dentisits and postgraduate students, were expected to be in the former group, and the remaining trainees were expected to be in the latter group. When compared on this basis of age difference, only the NPDI scores were found to be significantly higher (p=0.043) in the group above the age of 25. No significant differences were observed in the other experimental parameters.

With respect to the specific demographic details, the scores on ‘years at work’, ‘daily and weekly work hours’, ‘duration of breaks’, ‘duration of work sitting and standing’ were signifciantly higher in the group with age above 25 years (Table 2).

Table 3. Comparison of groups according to specialities
× 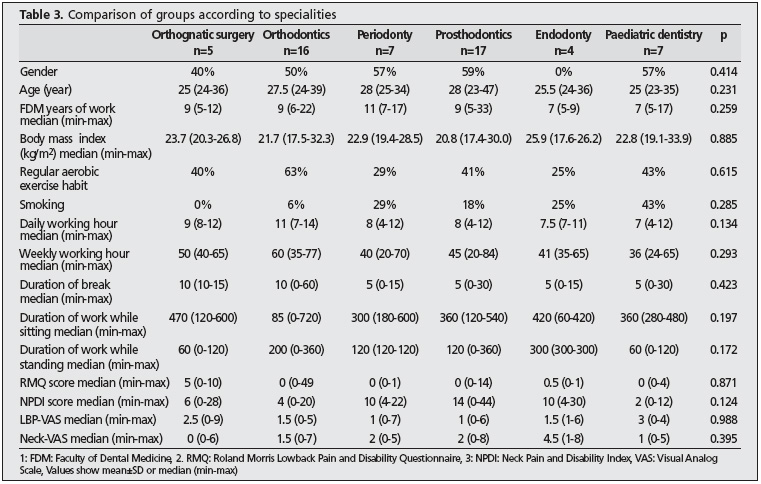 Relationship between the working conditions and the experimental parameters
Significant inverse correlation was determined between the SQ data on working while sitting and the RMQ scores (r=-0.188, p=0.008) and the NPDI scores (r=-0.271, p=0.000).

Table 5. Relationship between working conditions and frequency of low back pain and neck pain in some positions
×

In this study, the frequency and intensity of back and neck pain and the associated factors have been presented. In previously conducted investigations outside Turkey, LBP prevalence in dentistry were estimated to vary between 37% and 53%[1,11-13]. In the study presented here the corresponding estimate was higher (61%). Estimates of prevalence of neck pain in dentists in other studies similar to our results[14,15] however some have been as high as 44%[12] as compared to ours (34%).

The working positions such as standing or sitting, which the denist has to maintain during treatment of the patient can adversely affect the back and the neck[16]. Investigations using portable ergonomic devices have shown that dentists generally spend half of the working time with their head bent down while sitting, and complain of neck pain[17]. In another study, it has been shown that prolonged working with the neck in flexion in excess of 30 degrees causes neck pain[18]. In the present study, despite the weakness of the correlations, working while standing appears to be worse than working while sitting in terms of the investigated outcomes. Because, a correlation was observed between the duration of work while standing and back and neck pain. Whereas an inverse correlation was observed between the duration of work while sitting and back and neck pain. Although neck flexion during work, sitting or standing, have been experimentally observed in this study, measurements of the angles have not been made (Figures 2 and 3). According to our observations, the neck postures when working at a sitting position were more neutral than those postures while standing. While working in standing position, both the back and the neck postures were more asymmetric and at extremes of flexion, or, in other words, in ergonomically inappropriate positions. 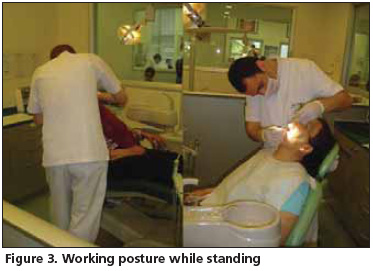 In this study it was observed that as the daily and weekly working hours increased, the complaints of LBP increased. It has been thought that prolonged maintanance of an inappropriate body position while working in a limited area may impose excess loading on the spine.

Recent studies have shown no effect of demographic characteristics of dentists on their musculoskeletal complaints[4,19,20]. In the present study, the BMI values were found to be within normal limits, incidence of smoking habit was low, and regular physical exercise was quite common, such that it can be thought that the investigated experimental population did not carry personal risk factors for musculoskelatal disorders. The effect of age was investigated by grouping and comparing the experimental subjects according to age below and above 25 years. Only the NPDI scores were found to be higher in the higher age group. This result is similar to those reported by Augustson et al.[21] and Alexopoulos et al.[5], and can be thought to arise from having worked for longer years in dental practice.

In accordance with the results of Alexopoulos et al.[5], there was no difference among the areas of specialistion of the dentists interms of low back pain and neck pain. It has been thought that this is due to lack of significant differences between different specialist groups with respect to postures adopted at work, the duration of work and the demographic details. However, a definite generalisation is not possible as the numbers of specialists in each group were not high enough to support such a conclusion.

One limitation of this study is the lack of objective measurement methods. Taking video recordings of neck flexion, shoulder elevation, upper extreme abduction, angle of body anteflexion and lateral flexion while the dentist is working, in order to make measurements on the images recorded, should establish the relationship between posture and the presence of LBP and neck pain. Another limitation of the study could be the relatively small numbers of the subjects when compared to other studies. It is also thought that individual psychological properties, such as stress intolerance, which would be expected to contribute to incidence and intensity of locomotor pain needs to be included in future studies. Looking at the mean age of the experimental population of this study, significantly young people have been investigated. Inclusion in future research of denists with much longer background at work should contribute to accumulation of more meaningful and probably more variable results.

It can be concluded that work duration and working posture are effective in causing back and neck pain in the staff of the schools of dental medicine. According to the results of this study, working while sitting is more favourable and recommendable than working while standing. In any future work, evaluation of the postural faults at work in detail should provide the basis for recommending working at more suitable postures to avoid locomotor problems. Also, the education of dental students on ergonomics and postural exercises while training should be useful in this respect.