Objective: Sedentary lifestyle, depression and lack of physical activity may lead to a decrease in bone mineral density (BMD) in patients with fibromyalgia syndrome (FMS). The aim of this study was to evaluate the role of FMS in the development of osteoporosis and the impact of depression on the BMD.

Materials and Methods: Fifty premenopausal women with a diagnosis of FMS according to the American College of Rheumatology (ACR) criteria and 40 premenopausal healthy controls were included in the study. A structured form was prepared covering demographic characteristics of the subjects. The severity of pain, disease activity and depression level were evaluated by Visual Analog Scale (VAS), Fibromyalgia Impact Questionnaire (FIQ) and Beck Depression Inventory (BDI), respectively. Lumbar spine and left femoral neck BMD values were determined by dual energy X-ray absorptiometry (DEXA).

Results: There was no difference between patients and controls according to age, body mass index and duration of education (p>0.05). BMD values in the lumbar vertebrae were significantly lower in the FMS group than in the controls (p<0.05). The BMD score was not different between the patients with a depression score higher or lower than the cut-off point (p>0.05). There were no correlations among BMD, age, and BDI, VAS, and FIQ scores (p>0.05).

Conclusion: We found that BMD of the lumbar vertebrae was lower in FMS patients than in the control group. We detected that depression has no significant impact on BMD. (Turk J Rheumatol 2010; 25: 105-9)

Fibromyalgia syndrome (FMS) is a non-articular rheumatism disorder characterized by widespread musculoskeletal pain, uncertain etiology, increased tenderness in multiple points, sleep disturbances, decreased pain threshold and several symptoms including fatigue[1,2]. FMS is common in the age group 30 to 60 years. Eighty-five to ninety percent of patients are women, and the prevalence in females was reported to be 3.2% in society[3].

Previous studies have shown that several psychiatric disorders such as depression, anxiety and somatoform disorders are present in patients with FMS[4,5]. Insomnia, anxiety and depression negatively affect the metabolism of muscle. Fatigue, pain and decreased physical activity are frequently observed and can lead to decreased muscle strength and aerobic endurance[6-8].

Osteoporosis (OP) is a systemic skeletal disease characterized by low bone mass and micro-architectural deterioration of bone tissue with correspondingly increased bone fragility[9]. In recent years, there has been a dramatic increase in the number of studies investigating chronic rheumatic diseases as a cause of OP[10,11]. Depression, decreased physical activity and decreased muscle condition have been shown as risk factors for the development of OP[12-14]. The few studies investigating the relationship between FMS and OP and the risk of OP development in patients with FMS have reported contradictory results[11,15]. In patients with FMS, other co-factors related with OP are also present, such as depression, decreased physical activity, and especially the sedentary lifestyle. Therefore, it is not clear whether FMS per se is an independent risk factor for OP. The purpose of this study was to determine whether FMS is a risk factor for OP and the effect of depression in these patients on the bone mineral density (BMD).

Fifty premenopausal female patients with a diagnosis of FMS according to the American College of Rheumatology (ACR) 1990 criteria[1] and 40 premenopausal female healthy controls were enrolled in this study. Those with an associated disorder that could affect bone metabolism (hypogonadism, hyperthyroidism, hyperparathyroidism, multiple myeloma, diabetes mellitus, etc.), history of medication known to cause osteoporosis (glucocorticoids, methotrexate, diuretics, aluminum- and magnesium-containing anti-acid, etc.), history of previous surgery and premature menopause, as well as those who were immobile for an extended period, who had spinal surgery or any fracture, and smokers and alcohol users were not included in the study. Informed written consent was obtained. Patients and the control group completed a structured form including age, height, weight, body mass index (BMI), training duration, educational status, occupation, and marital status.

The global pain of the patients was assessed by visual analogue scale (VAS) pain score (0–100 mm, with higher scores indicating more pain). Tender points were determined with digital palpation. Disease severity was determined with the Turkish version of the Fibromyalgia Impact Questionnaire (FIQ), the validity and reliability of which were previously shown[16,17]. Depression was assessed with Beck Depression Inventory (BDI). The BDI is a 21-item test presented in multiple-choice format that purports to measure the presence and degree of depression. Responses are made on a four-point, minimally anchored scale, ranging from 0 to 3, with 3 representing the most severe symptoms. The test was defined with a cut-off score of 17[18,19].

Statistical analysis
Statistical analyses were performed with SPSS 11.0 for Windows. Normality analyses were made with Shapiro– Wilks test. Data showing a normal distribution were expressed with mean value±standard deviation (SD) and data without normal distribution (phosphorus, alkaline phosphatase, parathyroid hormone values) were expressed with median (minimum-maximum). To compare two groups, Mann-Whitney U test and Student t test were used. For correlation between results, the Pearson’s correlation coefficient and Spearman’s correlation coefficient were determined. The sociodemographic characteristics of the groups were evaluated by chi-square test. P values less than 0.05 were considered statistically significant.

The mean age of the patients was 42.04±1.22 and of the control group was 37.44±1.16 years. All cases were women in the premenopausal period. The sociodemographic and clinical data of the patient and control groups are shown in Tables 1 and 2. There were no significant differences in the sociodemographic characteristics between controls and patients (p>0.05). The mean duration of illness was 3.93±4.24 years, median pain VAS was 7.02±1.74 and tender point number was 14.58±2.52. Median FIQ and mean BDI scores were 63.04±9.8 and 15.68±8.27, respectively. BMD values, laboratory parameters, and normal/osteopenic/ osteoporosis percentages according to T scores of the patients and control subjects are given in Table 3.

Table 1. The sociodemographic characteristics of patients with fibromyalgia and the control group (Mean± SD)
× 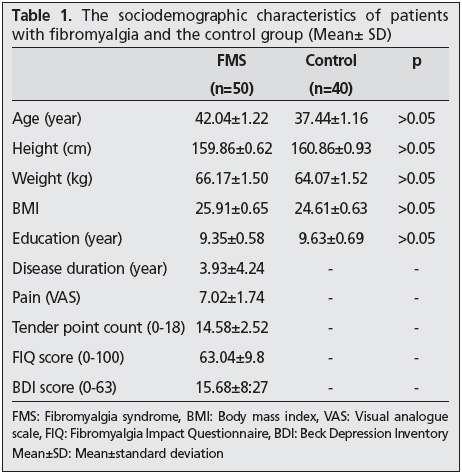 Table 2. Educational level, profession and marital status of patients with fibromyalgia and the control group
× 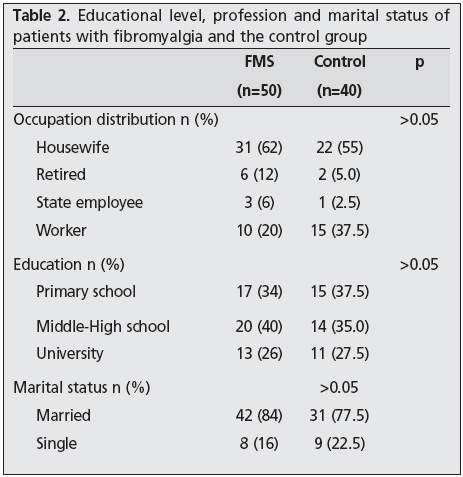 Table 3. Laboratory parameters and bone mineral densitometry values in patients with fibromyalgia and the control group
×

We found that L2-4 T scores and L2-4 BMD values were significantly lower in the patient group compared to the control group (p<0.05). While we detected OP development in 4 patients (8%), there were no signs of OP in the control group. Sixteen (32%) patients were detected as osteopenic. Patients were separated into two groups according to the BDI cut-off score as Group I patients (≥17) and Group II (≤16). There was no significant difference in BMD measurements between the two groups according to the depression levels (p>0.05) (Table 4). Furthermore, there was no significant correlation between BMD values (lumbar and femoral) and other parameters such as age, BDI, FIQ and the VAS pain score (p>0.05) (Table 5).

Table 4. Comparison of BMD values of FMS patients according to the depression levels
× 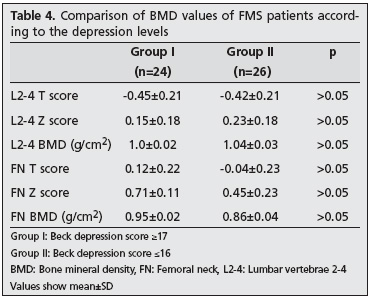 Fibromyalgia syndrome is known to accompany depression, and depression has also been reported as a risk factor for OP[21,22]. A regular exercise habit certainly has a primary role in protection from OP[23]. However, the majority of FMS patients do not exercise regularly and their physical fitness is low. This suggests that FMS patients are at risk in terms of OP.

In a study of patients with FMS, forearm BMD values were found to be lower compared to control subjects; their vitamin D levels were also significantly lower. The authors suggested that there was no need for routine BMD measurement in these patients but that they should be carefully questioned about the intake of vitamin D and their vitamin D levels should be monitored[25]. Zerahn et al.[26] measured BMD in 116 premenopausal women with FMS and 141 healthy control subjects with calcaneal ultrasound and they found no significant differences between the two groups. In another study, Jensen et al.[27] found that the lumbar spine and hip BMD values in patients with FMS were similar to control subjects; however, they found a negative correlation between BMD values and the severity of illness and pain. In the present study, BMD values of our patients did not identify a correlation with disease activity, age, pain, and depression levels. This difference may be a result of the subject group chosen, because we evaluated only premenopausal women in this study while, to our knowledge, other studies included both post- and premenopausal women.

While there are interpersonal differences, the presence of depression, a reduction in physical activity and sedentary lifestyle are more common in patients with FMS. Furthermore, clinical studies showed that depression can also cause a decrease in BMD[12,13,28]. In our study, BMD values did not differ in the two groups divided according to depression scores. In addition, there was no significant correlation between BMD levels and depression score. In a similar study done in Turkey, Erdal et al.[24] found a negative correlation between depression and lumbar vertebrae and femur BMD. Similarly, Yesevi et al.[29] reported a negative relationship between depression and lumbar spine BMD values.

In our study, the fact that the median BDI score was low may be the reason why no correlation was detected. However, as the median depression scores were not given in these two studies, we are not able to comment in this regard.

The main handicap of our study is that bone formation and resorption markers and vitamin D levels were not evaluated. There are only a few studies about BMD values and the presence of OP in FMS patients, and the results are conflicting. We can say that FMS may be a risk factor for OP. An early nutrition program rich in calcium and vitamin D, appropriate exercise protocols, and medical treatment should be considered in these patients in terms of preventing OP development. The conflicting results of studies on this issue highlight the need for more extensive studies in large populations.

Acknowledgment
We thank Prof. Yüksek Bek for his contribution to the statistical assessment.