A number of autoantibodies were detected in patients with connective tissue disorders.(1,2) Disease severity often correlates with a change in antibody levels, and elevated levels of such autoantibodies can be used as a prognostic indicator for organ-related complications and therapeutic effectiveness. In 1980, Nishikai et al.(3) first reported the specific association of anti-Jo-1 antibody in patients with polymyositis or dermatomyositis (PM/DM). This antibody was classified as myositis-specific autoantibody and its corresponding antigen was reported to be a 50-kDa histidine transfer ribonucleic acid (tRNA) synthetase, a type of cytoplasmic aminoacyl-tRNA synthetase (ARS).(4-6) ARS is an enzyme that attaches specific amino acids to tRNA in the presence of adenosine triphosphate, catalyzing the ARS reaction. Eight types of anti-ARS antibodies have been thus far identified.(7) They have been found to be prevalent in arthritis and interstitial lung disease (ILD), skin lesions, and idiopathic interstitial pneumonia.(8-11)

The study included a total of 228 RA patients (44 males, 184 females; mean age 62.9±14.0 years; range 23 to 88 years) who visited the Juntendo University Hospital between April 2010 and March 2014. Standards proposed by the 2010 American College of Rheumatology/ European League Against Rheumatism were used for the diagnosis of RA.(13) Autoimmune conditions were diagnosed based on the classification criteria for myositis.(14) and ILD was confirmed by histopathology or by the detection of interstitial infiltrates after chest radiography (X-ray generator, 0.6/1.2 P324DK-125, Shimadzu Corporation, Kyoto, Japan, and X-ray photoreceiver, flat panel detector CALNEO-U, Fujifilm Medical, Tokyo, Japan) or high-resolution computed tomography (CT, Aquilion ONE TSX-301C/3A, Toshiba Medical Systems Corporation, Otawara City, Tochigi-ken Japan). The study protocol was approved by the Juntendo University Hospital Ethics Committee. A written informed consent was obtained from each patient. The study was conducted in accordance with the principles of the Declaration of Helsinki. 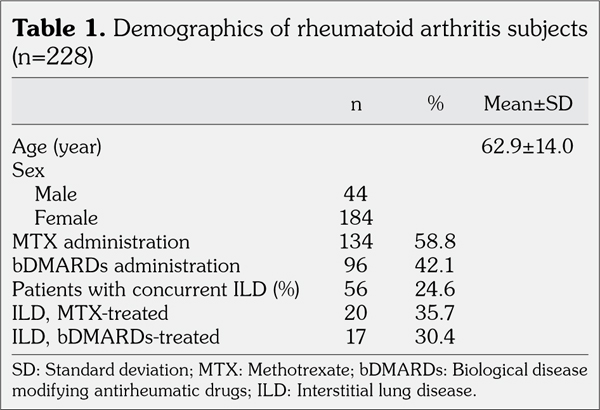 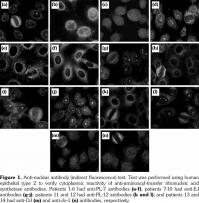 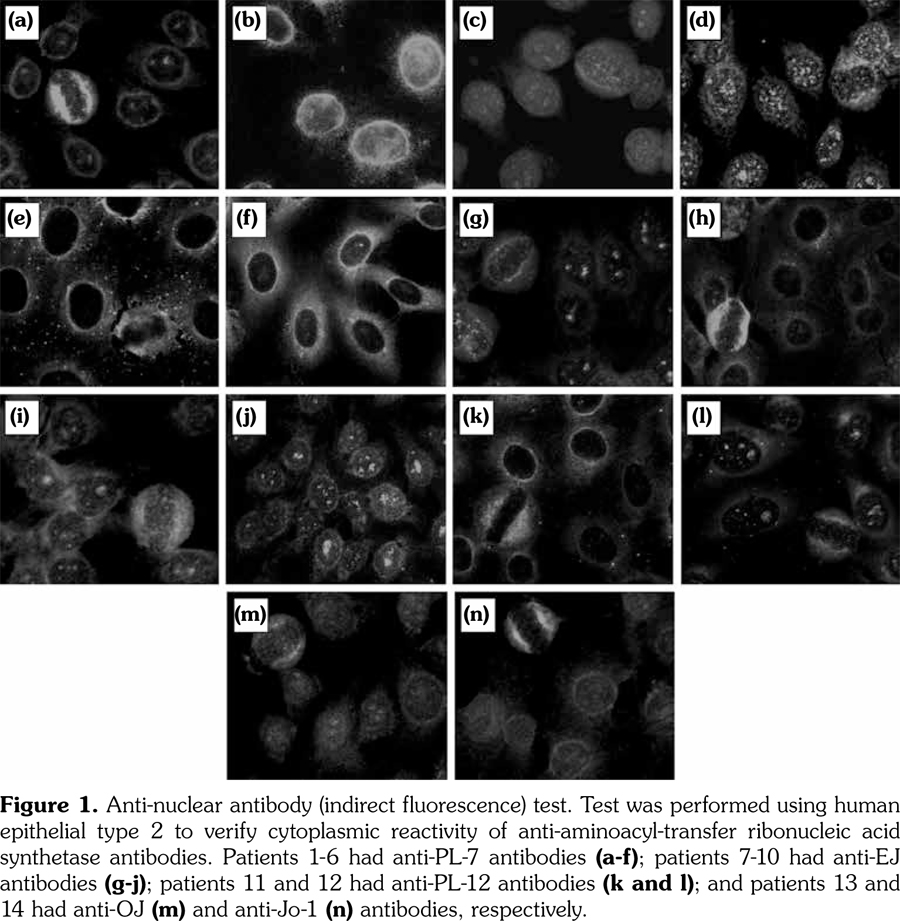 Table 4 contains detailed information (anti-ARS antibody status, age, sex, MTX and bDMARDs treatments, anti-CCP, and RF values) for patients who tested positive for anti-ARS antibody and had also ILD. MTX was administered to one patient while bDMARDs were administered to three patients. Abatacept and etanercept were administered to two and one patients, respectively. Except for one patient who tested positive for anti-PL-7 antibody, anti-CCP antibody and RF titers were high. Chest CT revealed that these patients did not have PM/DM during the clinical course of the disease (Figure 2). Chest CT scans revealed non-specific interstitial pneumonia lung complications in all patients. No characteristic changes were associated with the respective anti-ARS antibodies detected in patient sera. Moreover, patients with rapid progression of lung complications were absent.

Biological disease modifying antirheumatic drugs, such as tumor necrosis factor, interleukin-6, or cytotoxic T-lymphocyte associated protein 4, are recommended for the treatment of RA and they play an important role in improving the patient’s activities of daily living and quality of life.(28) Recent reports suggest that anti-tumor necrosis factor-alpha treatment of patients with elevated anti-ARS antibody levels may trigger myositis.(29) However, our results show that even in RA patients testing positive for anti-ARS antibodies and who were administered bDMARDs, connective tissue disorder complications such as PM/DM or transition/progression were absent. Although ILD complication was observed in 57% of RA patients who had autoantibodies against ARS, treatment with MTX and bDMARDs could be safely and effectively administered. Moreover, rapid progression of ILD was not seen in myositis patients testing positive for anti-ARS antibodies.(30)

Our study has certain limitations. First, being a retrospective study, the comprehensiveness of data collection could not be ascertained; second, this is a single-center study, which might be subject to regional bias and limit our sample size. Additional multicenter large-scale prospective studies are required to establish the anti-ARS antibody profile of RA patients. Furthermore, as we were unable to analyze the levels of anti- ARS antibodies in healthy subjects, a more controlled study is desired. We have, however, found that patients with other diseases such as Sjögren’s syndrome and microscopic polyangiitis are negative for anti-ARS antibodies. In spite of these limitations, the results of the study are important because, for the first time, they provide strong evidence of anti-ARS antibodies in RA patients, with a different distribution between ILD-positive and -negative patients.

In conclusion, line blot analysis of anti-ARS antibody levels in RA patients revealed that these autoantibodies were present in 6% of RA patients. Autoantibodies, particularly anti-PL-7 and anti PL-12 antibodies, were detected in a significantly higher percentage in patients with the complication of ILD. No significant effects of bDMARDs on the incidence of connective tissue disorder complications/transition/progression were observed in anti-ARS antibody-positive RA patients. RA patients, specifically those with ILD complications, should be tested for Anti-ARS antibodies. Ultimately, we hope that the results of this study will have therapeutic and diagnostic implications and will stimulate further research in this important area.