Objectives: This study aims to conduct a meta-analysis to clarify the epidemiologic characteristics of biopsy-proven lupus nephritis (BPLN), including those relating to its prevalence and prognosis.
Patients and methods: A literature search for relevant studies was conducted in the electronic databases of PubMed, Google Scholar, Embase, and Cochrane trial register. The following search terms were used for original articles published between January 1982 and April 2016: “lupus nephritis” or systemic lupus erythematosus (‘SLE’) or ‘systemic lupus erythematous’ and “pathology” or ‘epidemiology’ or prevalence or incidence. Pooled estimates with 95% confidence intervals were calculated.
Results: Nineteen studies were included (mean age of SLE patients at renal biopsy: ~30 years). Of total BPLN patients, 85% were females. BPLN developed in 29% of SLE patients, and accounted for 60% of secondary glomerular diseases in renal biopsy databases. BPLN prevalence among SLE patients was higher in Saudi Arabia compared with pooled Europe/USA data (43% vs 26%, p<0.05). Pooled BPLN prevalence among secondary glomerular diseases patients was higher in Asian/Latin American countries than in Europe (63% vs 34%, p<0.05). Overall five-, 10- and 20-year survival rates of BPLN patients were 94%, 86%, and 71%, respectively, which were higher than those before 1995 (84%, 72%, and 52%, respectively) and lower than those after 1995 (96%, 89%, and 80%, respectively) (all p<0.05). Class IV nephritis, present in 40% of BPLN patients, was a risk factor for renal failure that contributed to poor prognosis.
Conclusion: Lupus nephritis is a common complication of young female patients with SLE, and the most prevalent etiology of secondary glomerular diseases. Attention should be paid to class IV nephritis due to its high frequency and association with poor prognosis.

Systemic lupus erythematosus (SLE) is a chronic autoimmune disorder that predominantly affects younger females.(1-3) The disorder can involve many organ systems of the body, and manifests clinically in a relapsing and remitting manner.(1-3) SLE is characterized by the production of autoantibodies directed against nuclear and cytoplasmic antigens, and although its etiology is not well- understood, numerous genetic, epigenetic, and environmental risk factors have been identified.(1-3) Clinical management is based on disease severity, and includes the use of anti-inflammatory drugs (steroidal and nonsteroidal), immunosuppressive drugs, and biologic agents.

Lupus nephritis (LN) is a severe complication of SLE that has a broad spectrum of clinical and pathologic features, leading to various prognoses among patients with SLE.(4) Silent nephritis, now recognized as a serious pathologic abnormality of the kidney, presents in some patients with SLE, in the absence of abnormal urinalysis findings or other clinical features such as elevated serum creatinine and hypertension.(5) Biopsy of the kidney is thus considered to be of prime importance in some patients with SLE, as accurate diagnosis of biopsy-proven lupus nephritis (BPLN) allows for the instigation of an appropriate treatment strategy that can improve the survival rates of patients with SLE.(6,7)

However, the prognosis of LN still varies greatly from region to region, and is likely to be affected by genetic, racial, and other epidemiologic factors.(4,8) The identification of epidemiologic factors associated with BPLN will improve our understanding of this disorder, and may facilitate the diagnosis and management of this complication of SLE. To the best of our knowledge, there are only limited data relating to the epidemiologic characteristics of BPLN. Therefore, in this study, we aimed to conduct a meta-analysis to clarify the epidemiologic characteristics of BPLN, including those relating to its prevalence and prognosis.

This study was conducted at Nanjing Medical University, China between December 2014 to April 2016. Electronic searches were performed using the PubMed, Google Scholar, Embase, and Cochrane trial register databases with the keywords “lupus nephritis” and “pathology”, without restriction on settings or language. Original articles were identified which were published between January 1982 and April 2016. In addition, manual searches of reference lists were also conducted to minimize the chances of missing any articles. The following articles were excluded: review articles; case reports; repeat publications and duplications; non human studies; pediatric studies; basic science studies pertaining only to the mechanism of LN; studies relating only to repeated renal biopsy; articles focusing only on one type of LN or proliferative nephritis; articles in which renal biopsy was not routinely performed on most patients with LN; articles focusing on all kidney diseases without discriminating between primary glomerulonephritis and secondary glomerulonephritis; and studies relating to prognosis that did not provide specific values for survival rates (Figure 1). 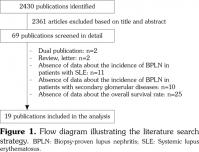 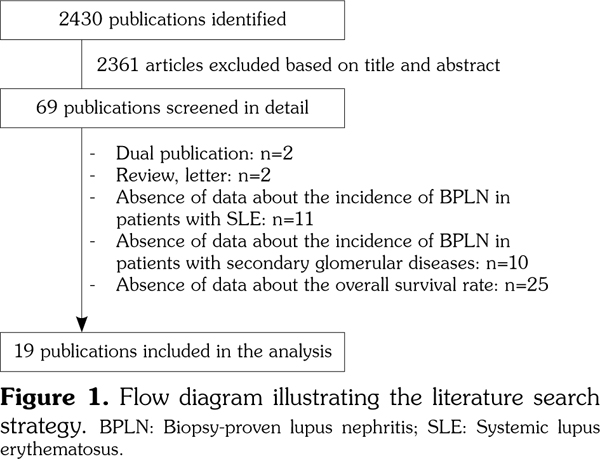 Statistical analyses were performed using STATA 12.0 meta-analysis software (StataCorp, College Station, TX, USA). Based on the crude numbers extracted from the individual studies, pooled estimates with 95% confidence intervals (CIs) were established of the following epidemiologic data: prevalence rate of BPLN among patients with SLE or SGD, proportion of female patients with BPLN, proportion of patients with BPLN and class IV nephritis, and survival rates of patients with BPLN at 5, 10 and 20 years. Fixed effect model was used if heterogeneity (I(2)) was less than 50%; otherwise, random effect model was applied. P values <0.05 were taken to be statistically significant. To estimate the influence of individual studies on the summary effect estimate (i.e. sensitivity analysis), meta- analysis estimates were re-computed omitting one study at a time. 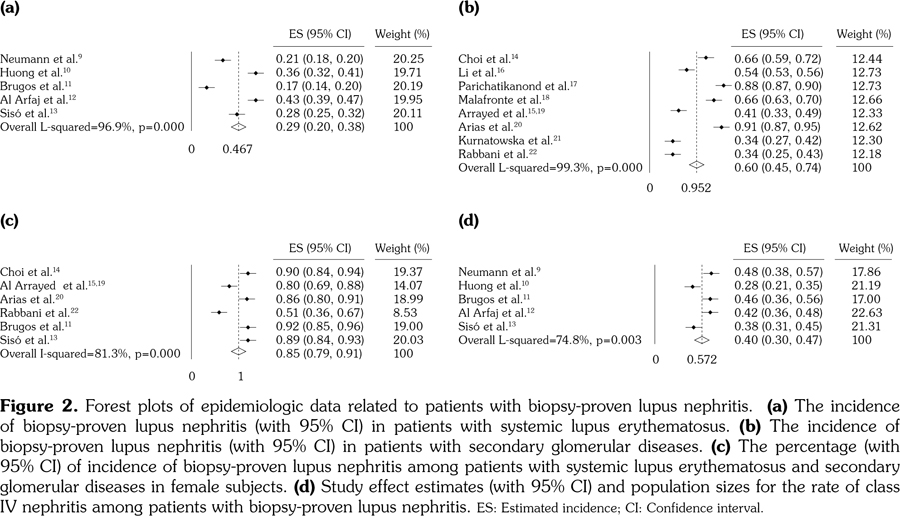 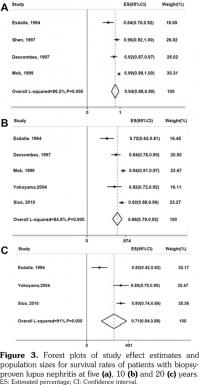 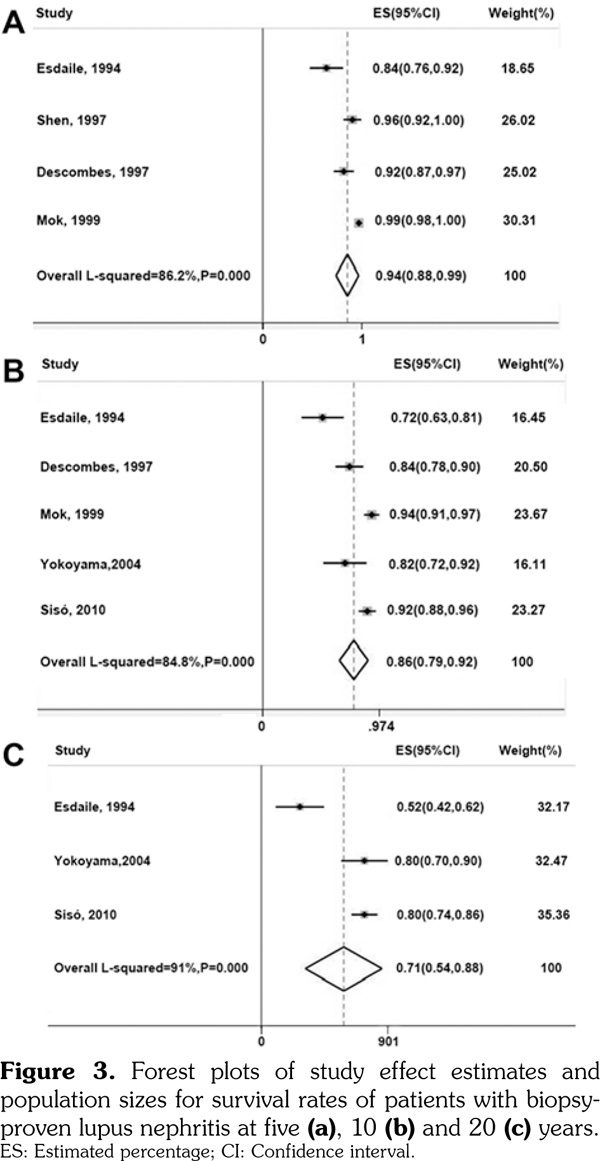 Four(13,23,24,27) of the six studies reported that renal failure was the main cause of death in patients with BPLN, and that the following parameters were risk factors for renal failure in patients with BPLN: class IV nephritis; male sex; hypertension; nephrotic syndrome; thrombocytopenia; hypocomplementemia; abnormal urinalysis; elevated anti-DNA antibody titers; and decreased creatinine clearance rate (Table 3).

The present meta-analysis was designed with the aim of improving our understanding of the epidemiology of BPLN. Although clinical findings such as proteinuria, hematuria, and elevated serum creatinine are often used for the diagnosis of LN,(29) these clinical presentations are not suitable for establishing the true incidence of LN.(5) Renal pathology is recognized as the gold standard for the diagnosis of LN, but to date, only limited epidemiologic data related to BPLN have been published. By conducting a meta- analysis of relevant articles concerning BPLN, the present study has provided novel insights into the epidemiologic characteristics of BPLN. BPLN developed in about 29% of patients with SLE and accounted for almost 60% of SGD in renal biopsy databases. The mean age of patients with SLE was approximately 30 years at renal biopsy, and 85% of patients with BPLN were female. The overall 5-, 10-, and 20-year survival rates for patients with BPLN were 94%, 86% and 71%, respectively. Class IV nephritis, present in 40% of patients with BPLN, was a risk factor for renal failure that contributed to poor prognosis in patients with SLE.

The sex distribution and ages of patients with BPLN may also vary with ethnicity. In Pakistan, the percentage of female patients with BPLN was 51.4%,(22) compared with 84.6% in Northwest England.(30) Among Afro-Caribbean and Chinese females, the prevalence rate of LN was highest in those aged 20-39 years, whereas among white and Indo-Asian females, it was highest in those aged 40-59 years.(30) Our analysis revealed that females, especially those aged 20-30 years, represented the majority of patients with BPLN, indicating that renal involvement of SLE was a common complication in female patients of child- bearing age.

Class IV nephritis was identified as the most frequent pathologic type in all studies that examined this (Table 1), although class II, class III and class V were also common; in contrast, class I and class VI were more rarely seen. A possible explanation for this is that patients with SLE and LN class I have milder presentations that are not indicators for renal biopsy, such that renal biopsy is less commonly undertaken. In contrast, patients with class II, class III, class IV or class V LN would likely have more obvious presentations, and hence would be more likely to undergo renal biopsy. Most patients with LN class VI would have end-stage renal failure, making renal biopsy unnecessary. However, it is not known why class IV was seen more frequently than class II, class III and class V; it is possible that this is related to an undiscovered pathologic mechanism.

The present study also explored the risk factors for renal failure in patients with BPLN. Class IV glomerulonephritis was found to be the most frequent risk factor. A recent study(35) indicated that class IV glomerulonephritis was the most ominous pathologic type among all the classes of nephritides, that 15-30% of patients with class IV nephritis did not reach remission, and that 15-30% of those reaching remission suffered relapse. Moreover, male sex, hypertension, nephrotic syndrome, hypocomplementemia, abnormal urinalysis, elevated anti-DNA antibody titers, and decreased creatinine clearance rate were all shown to be risk factors for renal failure. However, although these clinical parameters can warn of the possibility of renal involvement in patients with SLE, they are not sufficiently sensitive or specific to detect ongoing disease activity in lupus kidneys or early relapse of LN. Therefore, renal biopsy or other novel biomarkers are necessary to enhance the diagnostic accuracy for LN, detect early renal exacerbations, monitor treatment response, and evaluate prognosis.

Incidence studies of BPLN from the all the population was not available. Significant heterogeneity observed in the most of the analysis explains the differences in the study conduct, study design, methodology and bias in the studies included in the meta-analysis. We could not conduct the meta-regression analysis to test the differences in the incidence of BPLN in different ethnic groups due to insufficient number of studies available for the meta-regression analysis.

In conclusion, to the best of our knowledge, this is the first meta-analysis to systematically review the epidemiologic characteristics of BPLN. Our findings demonstrate that LN is a common complication of young female patients with SLE, and is the most prevalent etiology of SGD in renal biopsy databases. In addition, the prevalence rates of BPLN among patients with SLE or SGD show regional variation. Furthermore, the prognosis of patients with BPLN is still unsatisfactory in spite of the great improvement during the past 20 years. It is concluded that more attention should be paid to class IV nephritis due to its high frequency and association with a poor prognosis.