Rheumatoid arthritis (RA) is a chronic inflammatory disorder in which hypertrophy, hyperplasia and angiogenesis of synovial tissue may contribute to inflammatory joint destruction.(1,2) Kinin-kallikrein system (KKS) may be involved in RA pathogenesis since various molecules in the cascade of molecular reactions are related to: (i) cell growth and proliferation, (ii) production of cytokines (interleukin-6 and interleukin-8), (iii) generation of reactive oxygen species and nitric oxide, (iv) vasodilation, and (v) increased vascular permeability.(3)

Bradykinin (BK) is a nine amino acid vasoactive peptide that is produced by the proteolytic action of kallikrein on the precursor kininogen (KNG).(4) BK promotes the inflammatory signs of hyperemia, pain, and leakage of plasma proteins and affects blood pressure, platelet activation and aggregation, and fibrinolysis. BK acts through two types of receptors: bradykinin receptor (BR) 2 that is present constitutively in most tissues and has higher affinity to BK than BR1 that is induced during inflammatory conditions.(4-7) In addition, BR2 is optimally stimulated by the full sequence of BK or Lys-BK, while BR1 is sensitive to fragments of kinins without the C-terminal arginine (des-Arg9-BK, Lys-des-Arg9-BK).(8,9) Angiotensin converting enzyme (ACE) is also of great importance in BK mediated effects since it metabolizes BK and produces the inactive metabolite BK 1-5.(3,10)

Previous studies reported increased levels of ACE and BK in RA synovial fluid and up-regulation of BR1 and BR2.(3,11-16) Furthermore, KNG gene showed differential expression in studies of its association with RA,(17-19) while genome wide screens revealed that BR1 may be related to RA.(20) Additionally, to our knowledge, only one study in the literature described the association of the insertion/deletion polymorphism in ACE gene with RA.(21) Therefore, genetic variants that may affect ACE, BK, and BR genes expression and function may predispose to RA manifestation. Even though the role of KKS in autoimmunity and RA is reviewed extensively in the recent literature,(22) no genotypic data and associations are reported. Consequently, the present study is the first that examineds extensively the relationship of certain functional polymorphisms of KNG, ACE, BK, BR1 and BR2 genes with RA susceptibility.(2)

The study, which was conducted at Ioannina University Hospital between February 2012 and August 2016, included 136 unrelated patients with RA (27 males; 109 females; mean age 60.8 years; range 39 to 75 years). RA patients were classified according to the American College of Rheumatology criteria.(28) The demographic characteristics of patients are shown in Table 1. 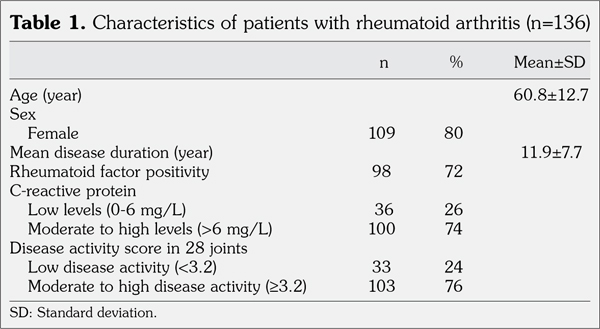 Additionally, 149 ethnic matching healthy volunteers (30 males, 119 females; mean age 56.2 years; range 35 to 78 years) with no personal or family history of chronic autoimmune, metabolic or infectious diseases were enrolled. The study protocol was approved by the Ioannina University Hospital Ethics Committee. A written informed consent was obtained from each patient. The study was conducted in accordance with the principles of the Declaration of Helsinki.

Arlequin software was used in the statistical analysis of the studied polymorphisms in order to establish Hardy-Weinberg equilibrium in RA and control groups. Chi-square test provided by the IBM SPSS statistical package version 21.0 (IBM Corp., Armonk, NY, USA) was used to test differences in polymorphisms’ distribution between RA and control groups. Statistical significance was set at p≤0.05.

Several pro-inflammatory molecules are present in the progress of inflammatory processes, which act via complicated molecular pathways. Kinins such as BK are considered pro-inflammatory mediators and were found to induce bone resorption in RA.(34,35) Bone loss due to the increased activity of osteoclasts is the result of the concerted actions of stimulatory and inhibitory cytokines.(34-37) Cytokines were reported to induce the expression of both BR1 and BR2 through which BK exerts its pro-inflammatory action and induces molecular mechanisms involved in bone resorption.(36,38,39) The above data are further supported by the fact that cytokines are mostly derived from monocyte or macrophage cells, which have been reported to play a role in RA manifestation.(40) In addition, the increased ACE activity in monocytes and synovial cells of RA patients that inactivates BK might support the role of KKS in RA susceptibility.(41,42) Finally, the increased amounts and activity of kallikrein, BK, and BR found in synovial fluid of RA patients and the reduction of the high molecular weight KNG in synovial fluid raise the question of a potential association of the functional polymorphisms of KKS related genes with RA susceptibility.(16,43-46)

However, in the present study, no significant difference was observed in genotypes distribution of the functional polymorphisms 587C>T of KNG,287bpI/DofACE,9bpI/DofBR2, -58T>C of BR2, and -699G>C of BR1 between RA patients and controls. To our knowledge, this is the first study that explored extensively the role of the functional polymorphisms of genes related to KKS with RA susceptibility. Therefore, we hope that the present study adds knowledge to the contradictory results of previous studies based on a single genetic variant of a KKS gene.

Specifically, only in one previous study, the deletion of ACE allele was associated with RA pathogenesis.(20) However, this study involved half of the number of patients compared to our study and the revealed association seems to be questionable. It is known that the deletion of ACE polymorphism is associated with increased levels and activity of ACE and therefore one could expect higher levels of BK to be transformed to the inactive form of BK1-5 reducing the inflammatory processes that are induced by BK.

On the other hand, the reported high levels and activity of ACE in monocytes and synovial cells of RA patients seem to be concordant with the high frequency of the homozygous ACE deletion in RA patients.(41,42) However, the latter may be attributed to the fact that ACE is also implicated in renin-angiotensin system (RAS); transforming the inactive angiotensin I to the active angiotensin II, which mediates with cell growth and proliferation by the stimulation of cytokines and growth factors.(10,47) Therefore, ACE increased activity in monocytes and synovial cells of RA patients may explain disease manifestation through RAS induced inflammatory processes, while the extent of the induced inflammation may be the equilibrium between the RAS and KKS function.

The above may provide an excuse for other studies of inflammatory diseases where the homozygous insertion ACE genotype -decreased ACE activity- was associated with juvenile RA and chronic plaque psoriasis.(38,48) In addition, the results for the role of ACE genotypes in systemic lupus erythematosus and asthma are contradictory;(49-53) while the data on the role of BR2 and BR1 polymorphisms in asthma and inflammatory bowel disease are limited and need further confirmation.(54,55)

In conclusion, this study, which concerns a large number of KKS functional polymorphisms, revealed that genetic variants in genes of KKS cannot be considered as susceptibility factors to RA. However, additional studies on both KKS and RAS gene polymorphisms and in larger groups of patients may reveal that specific genotypic combinations of KKS and RAS are related to inflammatory disease susceptibility and/or severity.