Giant cell arteritis (GCA) is a chronic medium and large vessel granulomatous vasculitis with a predilection for involvement of extracranial branches of carotid arteries, usually seen at the age of 70-80 years.(1) Typical presenting features include new onset headache, ocular symptoms, with palpable and tender temporal artery. In this article, we report a male patient of GCA with right ankle arthritis and orchitis.

A 56-year-old male patient presented with high grade fever and headache for a month associated with proximal myalgias, right ankle synovitis, and bilateral orchitis. His general examination was remarkable for the thickened right superficial temporal artery with scalp tenderness. Lab tests revealed an erythrocyte sedimentation rate of 112 mm/at the end of 1st hour, a C-reactive protein level of 396.3 (<5) mg/L, normal liver and kidney functions, and an unremarkable urine microscopy. His anti- nuclear antibodies, cytoplasmic-anti-neutrophil cytoplasmic antibodies, perinuclear-anti- neutrophil cytoplasmic antibodies, and hepatitis serology were all negative. Ultrasound Doppler of the testes revealed increased vascularity suggestive of orchitis and funiculitis in both testes. Computed tomography angiography of thoracic and abdominal vessels revealed no evidence of vessel aneurysms or stenosis (Figure 1). The temporal artery biopsy (TAB) revealed dense mixed inflammatory infiltrate consisting predominantly of lymphocytes and histiocytes involving the tunica adventitia, and the media with an extension into the intima and near complete destruction of external elastic lamina and focal disruption of internal elastic lamina (Figure 2). There was no fibrinoid necrosis, leukocytoclasia or giant cells in the examined biopsy specimen. Patient was then treated with pulse intravenous methylprednisolone followed by oral steroids and methotrexate. Resolution of symptoms was noted over four weeks. Currently, after six months of follow-up, the patient is stable and on weekly subcutaneous methotrexate 20 mg along with prednisolone five mg/day. A written informed consent was obtained from the patient. 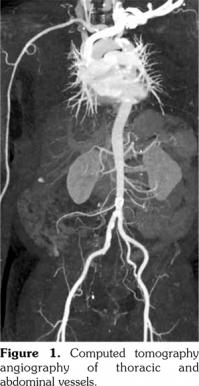 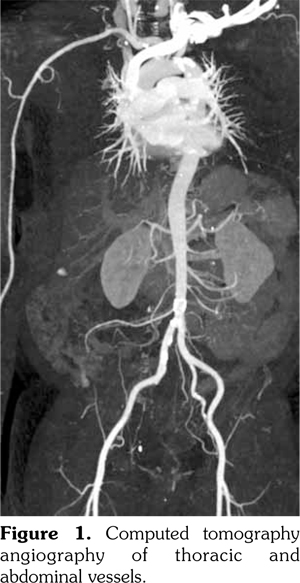 Narváez et al.(2) found peripheral arthritis in eight of their 73 patients (11%) with GCA, which was typically peripheral, distal, asymmetric, non- erosive, and temporary. Orchitis and epididymitis have been reported previously as the sole urological manifestations of GCA.(3) When the disease has atypical presentation, histological analysis of TAB biopsy specimen plays a key role in distinguishing GCA from non-GCA arteritides.(4) The TAB in our patient revealed panarteritis with a predominant lymphocytic and histiocytic infiltrate, which is consistent with the histological pattern of GCA.(5) Absence of significant leukocytoclasis, neutrophil/eosinophil infiltrate and fibrinoid necrosis argues against the alternative etiology such as polyarteritis nodosa and anti-neutrophil cytoplasmic antibodies vasculitis in our patient. Although giant cells were not visualized in the observed biopsy specimen, they are typically observed in only about half of the biopsy positive patients with GCA and are not mandatory for diagnosis.(6)

In conclusion, GCA can be a great mimicker with varied clinical presentations. While atypical clinical manifestations like arthritis and orchitis may suggest an alternative clinical condition, TAB can establish definitive diagnosis.