Kikuchi-Fujimoto disease (KFD) is a rare benign self-limiting disease with an unknown etiology that shares similar clinical and laboratory results with other diseases. It is reported in adults and children.(1-3) In this article, we report a 13-year-old boy with prolonged fever, weight loss, hepatosplenomegaly, and generalized lymphadenopathy who was diagnosed to have KFD by lymph node biopsy.

A previously well 13-year-old boy was admitted with a four week history of high grade fever. He was initially treated as a case of recurrent tonsillitis and had received multiple courses of antibiotics without any improvement. Initially, the fever was intermittent, then became continuous in the last two weeks. There was a history of generalized arthralgia and weight loss. There was no history of travel abroad, exposure to pets, tuberculosis, insect bite or ingestion of raw milk. There was no history of skin rash, arthritis, diarrhea or abdominal pain. Examination showed only a small, soft, non-tender palpable submandibular lymph node. The abdomen was not distended. No organomegaly was detected.

Bone marrow trephine biopsy showed slightly hypocellular marrow for the patient’s age, with trilineage hematopoiesis. Cervical lymph node excision was performed, which showed large areas of geographic necrosis with prominent nuclear debris and sheets of plasmacytoid dendritic cells. The background consisted of histiocytes, lymphocytes, and few eosinophils. The residual lymph node showed reactive germinal centers and tingible body macrophages, but no hemophagocytosis (Figure 1). These findings were consistent with necrotizing lymphadenitis of KFD. During the course of investigations, the high grade daily spiking fever persisted for twelve days and then resolved by itself. 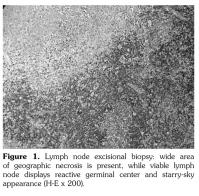 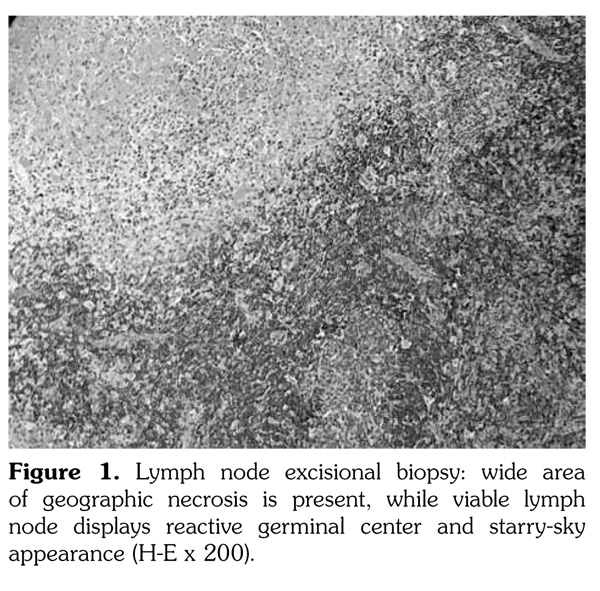 Kikuchi-Fujimoto disease should be considered in every child with fever of unknown origin and lymphadenopathy if other infectious, autoimmune and malignant causes were excluded. It usually presents with fever and cervical lymphadenopathy in association with other systemic symptoms.(4,5) Rarely, other lymph nodes such as inguinal and axillary lymph nodes may be involved.(6,7) Laboratory examination usually shows anemia, leukopenia and elevated transaminases, lactate dehydrogenase and ferritin.(5) A high index of suspicion is needed for its diagnosis by histological examination of the affected lymph nodes to establish an early diagnosis, and avoid other unnecessary investigations and treatments.
Conflict of Interest