Henoch-Schönlein purpura (HSP) is the most common form of systemic small vessel vasculitis involving the skin, joints, kidneys, and gastrointestinal tract in childhood.(1) Because of its systemic nature, involvement of other organ systems such as genitourinary, cardiopulmonary, and nervous systems may be observed.(2-4) Although headache and behavioral changes have been described in a significant proportion of children with HSP, severe neurological complications have been reported as rarely as 2% during the acute phase of the disease.(4-6)

In this article, we report a severe neurologic involvement in a four-year-old boy with HSP who was treated with intravenous pulse methylprednisolone and pulse cyclophosphamide, and followed-up for four years without any sequel.

Based on these clinical findings, the patient was diagnosed as HSP, and the skin biopsy showed leukocytoclastic vasculitis with histopathologic evidence of immunoglobulin (Ig) A and M deposition based on direct immunofluorescence staining. A written informed consent was obtained from the parent of patient. The patient was being followed-up as an out-patient. On the 15th day of his follow-up, he admitted to the emergency department by sudden focal tonic- clonic convulsions and unconsciousness. He was not able to use his right hand and foot, also he could not talk. His blood pressure was 105/70 mmHg. Fundoscopic examination was unremarkable. The physical examination showed aphasia, right sided central facial paralysis, and hemiplegia on the right. Deep tendon reflexes were exaggerated and there was extensor plantar response on the right side. Cerebellar functions and sensory testing were normal. In acute laboratory evaluation, serum electrolytes and glucose levels were normal. Immediate 1.5 Tesla magnetic resonance imaging (Magnetom Avanto, Siemens Medical Solutions, Erlangen, Germany) demonstrated multiple, high signal intensity areas on T2-weighted images in both cortical and subcortical areas of the left parietal lobe (Figure 1). Magnetic resonance angiography revealed narrowing and irregularities in the lumen of left middle cerebral artery resembling vasculitis (Figure 2). Electroencephalography showed diffuse generalized delta slow waves of moderate amplitude without epileptiform discharges. Renal angiography and mesenteric vasculature were normal. The patient was diagnosed as cerebral vasculitis due to HSP. Intravenous pulse methylprednisolone (30 mg/kg/day) was given for three consecutive days; subsequently the patient received oral steroids (2 mg/kg/day) for cerebral vasculitis. Because of the unchanged clinical status of the patient, pulse cyclophosphamide therapy was begun. Patient received 500 mg/m(2)/day pulse cyclophosphamide monthly for three months. He showed clinical improvement after cyclophosphamide therapy. The follow-up magnetic resonance angiography, performed 15 days after the initial one, demonstrated substantial improvement of cerebral lesions (Figure 3). His steroid treatment was stopped by tapering within six months. He had speech therapy and also physical rehabilitation and therapy for two years. He has been followed-up without any sequel for four years. 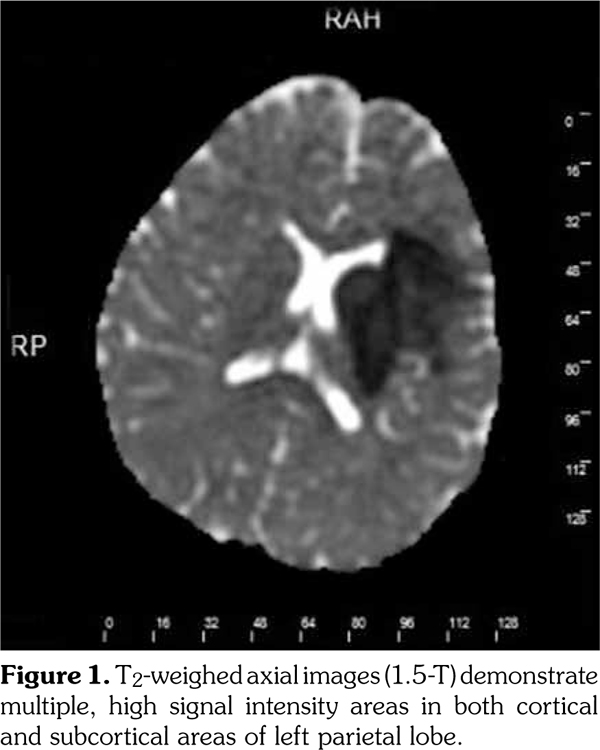 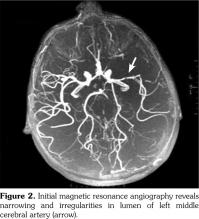 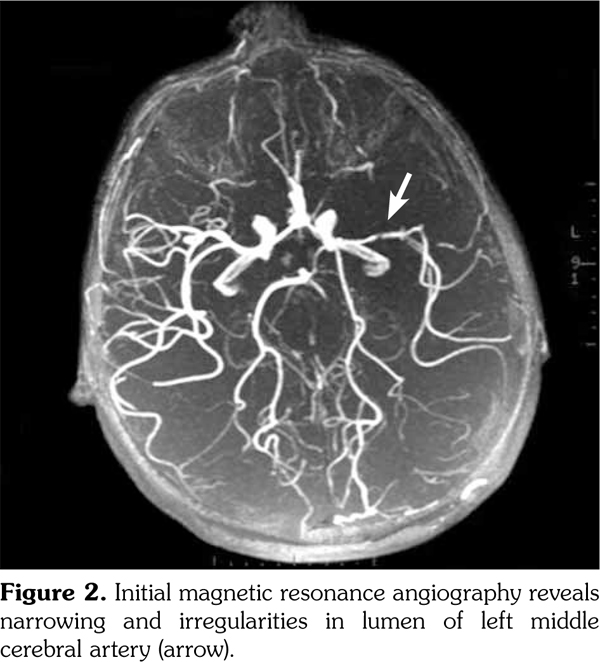 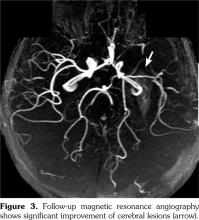 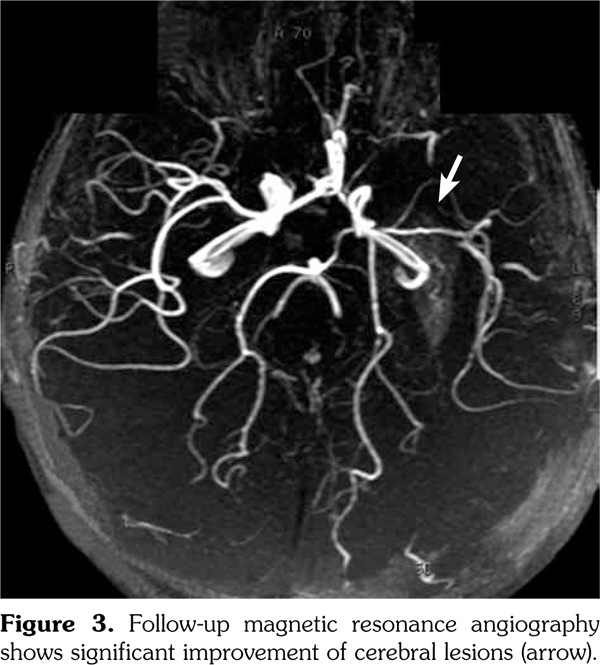 A great majority of patients recover from HSP completely, nevertheless, the condition may be associated with several rare complications. Although headache and behavioral changes are seen in many patients, severe neurological complications such as seizures, intracerebral hemorrhage, hemiplegia, and encephalopathy have also been reported albeit rarely during the course of HSP.(1,2) Polyarteritis nodosa should be considered as a possible diagnosis in patients with HSP who have an unusual course, especially in patients presenting with severe neurological complications. Our patient admitted with hemiplegia and polyarteritis nodosa was ruled out with renal angiography. The diagnosis of cerebral vasculitis may be difficult since the underlying neurologic abnormalities in HSP may have a multifactorial etiology. It has been reported that concomitant occurrence of hypertension, uremia, metabolic abnormalities and, corticosteroid treatment might contribute to the neurologic manifestations.(7) Our patient was normotensive and his serum chemistry was normal. Therefore, we could rule out the possibility of uremic and hypertensive encephalopathy. Garzoni et al.(4) reported that without severe hypertension, the most frequent neurologic manifestations of patients with HSP are altered level of consciousness in 54%, convulsions in 40%, focal neurologic deficits in 26%, visual abnormalities in 22%, and verbal disability in 10% of patients. Our patient admitted with hemiplegia and aphasia together. Neuroimaging results of cerebral lesions with central vasculitis in patients with HSP have been reported to be normal in 14%. The most frequently reported lesions were ischemic in 43% and hemorrhagic in 33% of the patients.(7,8) Ischemic lesions are usually multiple, but if there is a single vascular cerebral ischemia, the middle cerebral artery is mostly affected, like in our patient. A review of the literature indicates that neurologic symptoms usually develop less than two weeks after the onset of HSP.(8) Our patient was diagnosed on the 15th day of the disease.

Henoch-Schönlein purpura is usually a self-limited disease.(2-4) However, the potential morbidity and mortality associated with central nervous system involvement have led to aggressive treatment. The treatment of cerebral vasculitis in HSP is based on anecdotal reports. Pulse corticosteroid therapy is widely used as the first-line treatment and has proven to be effective in most patients.(3-4,7) For patients who show corticosteroid dependency or who do not respond to the therapy, other immunosuppressive drugs such as cyclosporine A, cyclophosphamide, or mycophenolate mofetil have been used by patient-based decisions.(7,8) Another treatment option for neurologic involvement in HSP is plasmapheresis.(8,10) Plasmapheresis is thought to primarily modulate the immune response by eliminating and diminishing plasma immunological mediators that are responsible for HSP.(10) Like in severe Henoch-Schönlein glomerulonephritis, combined therapy with corticosteroids and cyclophosphamide may be appropriate in a patient with relevant ischemic cerebral lesions and HSP.(7) Our patient was successfully treated with the combined therapy of pulse methylprednisolone and pulse cyclophosphamide followed by long-term corticosteroid treatment.

In conclusion, cerebral vasculitis should be suspected in all cases of HSP with neurologic manifestations. Magnetic resonance angiography is the modality of choice for diagnosis and follow-up evaluation. Although treatment options are numerous and controversial, combined therapy with pulse corticosteroid and pulse cyclophosphamide should be the first choice in pediatric patients.