Behçet disease (BD) is a vasculitis involving various systems such as gastrointestinal system, in addition to recurring oral, genital ulcers, and ocular manifestations.(1,2) It most commonly affects Mediterranean and East Asian ethnic groups and generally starts between 20-35 years of age.(3,4) Although the etiopathogenesis of BD has not been completely identified, it is considered to be manifested due to intense inflammatory response triggered by an infectious agent in individuals having genetic predisposition.(5-8) Better understanding of the etiology and pathogenesis of BD at the cellular and biochemical levels is required in order to develop cure and prevention against the disease. Recently conducted studies have focused on oxidative stress in diabetic retinopathy. In vitro studies have revealed that the major cause related with the etiopathogenesis in patients with BD is induction of endothelial cells by oxidative stress.(9,10)

Endocan is a dermatan sulphate proteoglycan molecule. It is an endothelial marker expressed by endothelial cells.(11) It has been suggested that endocan plays a significant role in organ- specific inflammation and it is a marker showing endothelial dysfunction. It leads to adhesion, migration of endothelial cells, and angiogenesis in numerous inflammatory disorders.(12-14) Endocan expression in vascular endothelium is regulated by various cytokines and growth factors. Additionally, it has been shown that there is an association between endocan level and vascular endothelial growth factor (VEGF) messenger ribonucleic acid in many studies.(15) It has been stated that endocan release is regulated by cytokines and growth factors such as VEGF in numerous studies. Moreover, in these studies, VEGF was found to induce endocan release through stimulation of endothelial migration and angiogenesis, which are induced by VEGF-A.(16,17) In a recently conducted study, endocan was shown to play a key role in regulation of cellular adhesion, inflammatory diseases, and growth and progression of tumors.(16,17) Additionally, endocan expression in endothelial cells is upregulated as a response to tumor necrosis factor-alpha (TNF-α).(18,19) TNF-α is among the cytokines which were investigated in most detail in BD. There are numerous multi- centered and multi-national studies conducted with TNF-α.(20) There are also several studies in BD, verifying the therapeutic efficacy of anti- TNF-α agents, especially in uveitis.(19)

In this study, we aimed to investigate the relationships between serum endocan, VEGF, and TNF-α levels in active BD.

All participants who were admitted to Atatürk University Physical Therapy and Rehabilitation and Eye Clinic between November 2014 and February 2015 were included in the study. A total of 40 patients (24 males, 16 females; mean age 37.6±8.7 years; range 20 to 50 years) whose disease was at active state (clinically active uveitis and/or arthritis findings) were included in the study together with 40 age and sex-matched healthy participants (22 males, 18 females; mean age 38.8±7.9 years; range 21 to 52 years) as the control group. The diagnosis of BD was made according to the criteria of International Study group for BD.(20) The exclusion criteria were presence of obesity (body mass index >30 kg/m2), metabolic syndrome, diabetes mellitus, thyroid dysfunction, alcohol consumption, smoking, hyperlipidemia, hypertension, heart failure, coronary artery disease, valvular heart disease, renal failure, hepatic failure, active hepatobiliary disease, active infectious disease, malignancy and immunological disorder, patients who were receiving systemic agents for treatment of BD, which may potentially interfere with measurement of endocan and endothelial dysfunction. In both groups, ophthalmologic examination was performed, including visual acuity, measurement of intraocular pressure, biomicroscopical and fundus examination. All patients were evaluated by optic coherence tomography. In all patients, fluorescein angiography data during their first admissions and when available, during follow-up examinations were recorded. Ethical approval was obtained from the Medical Ethics Committee of Atatürk University Medical Faculty and written informed consents were received from all participants in accordance with the principles of the Declaration of Helsinki. 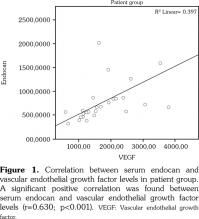 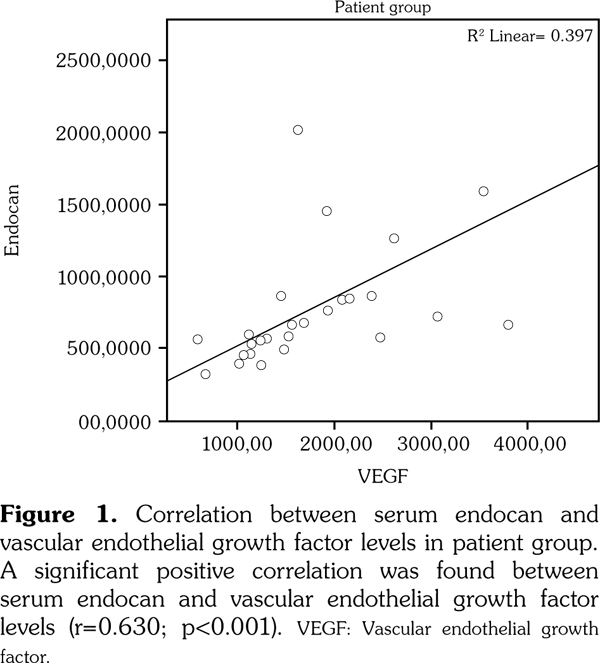 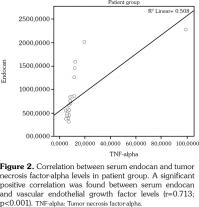 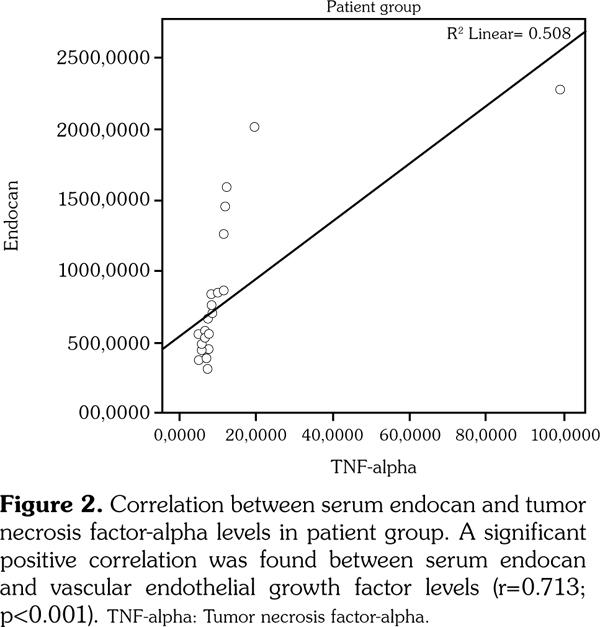 The basic pathology in BD is the inflammatory process in small arteries and veins together with thrombosis as a result of vasculitis of the vaso vasorum.(24) Since increased immunoglobulins, immune complexes, complement and acute phase proteins have all been reported, the immune system is considered to be involved and activated in the course of disease. Abnormalities detected in neutrophils, endothelial cells, or both, have been suggested to be responsible for many of the clinical manifestations in BD.(25)

Endocan is a proteoglycan which is secreted by vascular endothelial cells and which can be considered as a marker of endothelial activation.(26) To the best of our knowledge, until today, only one study has been conducted which has shown that plasma endocan increased in chronic kidney disease patients and influenced all-cause mortality together with cardiovascular events. According to these results, endocan may influence both the inflammatory process and the endothelial function in the pathogenesis of many vascular disorders.(27) Balta et al.(28) have compared the serum endocan levels of patients with BD with healthy individuals. In their study, they have determined higher serum endocan levels in BD patients when compared to the control group. They suggested that expression of endocan by the vascular endothelium may be a marker for systemic immune inflammatory vasculitis characterized by endothelial dysfunction such as BD.

Expression of endocan has been described to a great extent to be strongly up-regulated in the presence of proangiogenic molecules such as VEGF-A and VEGF-C which are critical mediators involved in angiogenesis, lymphangiogenesis, and cancer progression.(29) Zhang et al.(30) suggested that endocan plays a significant role in organ-specific inflammation and may be a marker indicating endothelial cellular dysfunction. Additionally, they showed a significant relationship between endocan and VEGF.

In a recently conducted study, Abu El-Asrar et al.(31) have studied the levels of endocan and VEGF in the vitreous fluid in patients with proliferative diabetic retinopathy (PDR). In their study, they have found a significant correlation between the vascularization level of epiretinal membranes in PDR and endocan level in the vitreous fluid. Additionally, they have shown a significant positive correlation between the VEGF and endocan levels in vitreous fluid. Authors have claimed that endocan was being over-expressed in PDR patients; moreover, endocan might have been a new biomarker of angiogenesis in PDR patients. In our study, we determined a positive correlation between endocan and VEGF levels in general, in patients with BD.

Endocan has a significant role in regulation of cell adhesion, inflammatory disorders, and tumor progression. Additionally, the expression of endocan in endothelial cells is up-regulated as a response to TNF. TNF-α was shown to induce endocan expression in vitro, whereas interferon- gamma inhibited up-regulation of endocan which was induced by TNF-α.(32) Similarly, Voiosu et al.(33) showed that endocan expression was affected by VEGF-A, TNF-α, and cytokines which are involved in pathogenetic pathways in inflammatory bowel disease.

As previously mentioned, the specific sites for production of endocan are endothelial cells. Although the exact mechanism of endocan expression in infection has not been fully clarified, the expression of endocan is up-regulated as a response to TNF-α or interleukin-1 beta in vitro.(34) The expression of endocan is up-regulated by VEGF-A, VEGF-C, and TNF-α. The amount of experimental evidence is growing, which implicates endocan as a key player in the regulation of major processes such as cell adhesion, inflammatory disorders, and tumor progression. Inflammatory cytokines such as TNF-α and proangiogenic growth factors such as VEGF, fibroblast growth factor-2, and hepatocyte growth factor/scatter factor increase the expression, synthesis or secretion of endocan in human endothelial cells. In our study, we determined that a correlation was present between endocan level and levels of VEGF and TNF-α, in general.(35)

In conclusion, since its cloning in 1996, endocan and endothelial cell specific molecule-1 were shown to have significant roles in many pathophysiological processes including inflammatory disorders and tumor development. In our study, we determined statistically significantly higher serum endocan levels in patients with BD. Positive correlations were present between serum endocan level and levels of VEGF and TNF-α. According to these results, endocan might affect both the inflammatory process and endothelial function in the pathogenesis of BD. Many possible mechanisms, including stimulation of endocan expression by increased plasma levels of VEGF and TNF-α, may be responsible for increased serum endocan levels in patients with BD. As a conclusion, circulating endocan may be a new marker in BD patients. It may be helpful in evaluation of both the prognosis and activity of the disease. Endocan may be a marker of endothelial dysfunction and may have a functional role in endothelium-dependent pathological disorders. Whether endocan measurement can be used for follow-up of therapeutic success is a subject which needs to be investigated.