Osteoarthritis (OA) is a common chronic degenerative and disabling disease caused by the interaction of multiple risk factors such as obesity, trauma, and hormonal and occupational factors.(1) Chronic and symptomatic knee osteoarthritis (KOA) is believed to affect around 9.3 million young adults (≥45 years) in the United States with an obvious economic burden and impact on quality of life.(2) In Mexico, the prevalence of OA is estimated at 14% and it has been considered as the fourth cause of morbidity in adults over 60 years of age.(3)

Knee osteoarthritis involves cartilage degradation, joint space narrowing, osteophyte formation at the joint margins, and subchondral changes. At present, clinical history and X-rays are still the most reliable methods to diagnose and establish the severity of disease. As OA initiates before the radiographic alterations can be identified, the diagnosis is usually established at a very late stage of the disease.(4,5) Hence, it is important to examine potential biochemical parameters not only to discriminate between KOA and its severity, but also to evaluate changes in markers concentrations and their relationship with other variables such as age, sex, and daytime variations, among others.(6)

Cartilage oligomeric matrix protein (COMP) is a 524-kDa noncollagenous homopentameric protein present in cartilage.(7,8) Although the function of COMP remains unclear, it has been suggested that this may have a role in endochondral ossification, interacting with collagen fibrils via each C-terminal globule, for extracellular matrix stabilization. It is also known for influencing fibril formation for collagens type I and II, accelerating fibrillogenesis and binding to aggrecan, mediating the organization of cartilage matrix for its load bearing function.(9,10) In previous studies, serum COMP has been associated with diagnosis and prognosis of clinical KOA;(11-14) however, it remains unclear whether COMP is sensitive enough to evaluate KOA patients.

While serum and urine sampling are easy to obtain, levels of biomarkers from both anatomical sides exhibit large interindividual variations, leading to the requirement of highly sensitive techniques to avoid such variations. Serum and urine levels of COMP may be influenced not only by metabolism and clearance, but also by other factors such as non-joint tissues, age, sex, or daytime variation. Thus, the specificity of this marker for KOA may be diminished, limiting its use in the assessment of patients. To clear this issue, synovial fluid (SF) markers may be more informative than systemic markers as they relate to structural changes and damage within a joint. Therefore, SF markers may be useful as diagnostic and prognostic tools, and to measure efficacy of intervention.(15)

A limited number of studies have been found in the literature related to the analysis of COMP levels in SF and/or comparing levels of COMP between SF with serum.(16-18) In those studies, a high level of COMP was detected in both fluids, showing higher concentrations in SF than in serum indicating preferential release from the affected joints (Table 1). 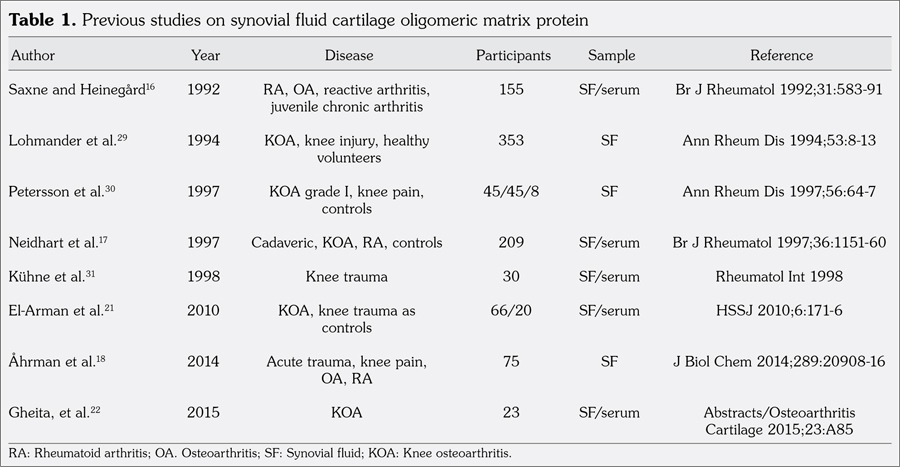 Of the total 229 participants, 77 samples corresponded to SF only, 78 samples to serum only, and for 74 individuals, both SF and serum samples were taken. The study protocol was approved by the Clinica del Magisterio Ethics Committee. All patients provided written informed consent. The study was conducted in accordance with the principles of the Declaration of Helsinki.

For the patient group, knee joint aspiration was carried out under aseptic conditions for therapeutic reasons. Knee aspiration for the controls was also carried out under aseptic conditions as described by Driban et al.(19) In both groups, arthrocentesis through the superolateral patella portal was performed using a 20G  32 mm sterile needle after local subcutaneous anesthesia with 2 mL at 1% lidocaine hydrochloride. Approximately 2 to 10 mL of SF was collected. Aliquots were centrifuged for 15 minutes and supernatants were kept frozen and stored at -80 °C. For both groups, simultaneously, venous blood sample was taken by sterile venipuncture. The separated serum was kept frozen at -80 °C for analysis.

Statistical analysis
All statistical analyses were performed using IBM SPSS version 22.0 software (IBM Corp., Armonk, NY, USA). Comparative analyses between groups were carried out using non- parametric tests. Mann-Whitney U test was used to compare medians between groups while Kruskal-Wallis test was used to compare COMP levels among severity grades of disease. In addition, Spearman coefficients were estimated to examine the correlation between COMP values with daytime variation, age, and Kellgren- Lawrence grades of severity. Finally, p<0.05 was regarded as indicative of a significant difference.

The clinical and demographic characteristics of participants of this study, along with their corresponding COMP levels, are depicted in Table 2. Total SF COMP levels were considerably higher than total serum levels (676.6 ng/mL vs 257.5 ng/mL) (Table 3). Additionally, both COMP levels in SF and serum were higher in patients than in controls (SF, p=0.033 and serum p=0.035). Interestingly, COMP levels in SF were significantly higher only in female patients (p=0.007) (Table 3). 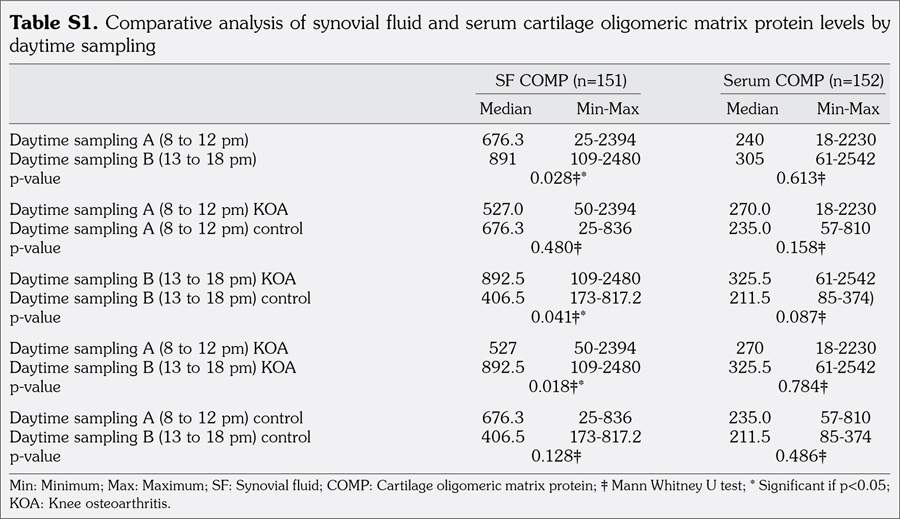 The employment of biomarkers related to cartilage degradation may be useful in the diagnosis of OA. In a previous study performed by Sudhir Singh et al.,(20) serum COMP levels were higher in patients when compared to controls. Thus, this group have suggested that COMP may be used as a potential biomarker to diagnose OA patients, suggesting also the possibility to establish cutoff serum COMP levels to discriminate between the grades of severity of disease.(2)

Our study aimed to measure and compare serum and SF COMP levels in patients with primary KOA and healthy individuals to find out whether COMP could have a potential role for diagnosis in KOA patients. Moreover, we aimed to compare SF and serum levels of this biomarker considering age, sex, severity of disease and diurnal variation. In addition, we aimed to correlate SF and serum COMP levels with diurnal variation, particularly within primary KOA patients.

Results of this study showed significant differences when comparing primary KOA vs healthy individuals, in which COMP levels in SF were higher than serum in both groups of study. Similar results were found by El-Arman et al.,(21) Gheita et al.,(22) and Andereya et al.,(23) suggesting that COMP is produced in the joint and associated with cartilage turnover. The renal clearance of serum COMP is another possible explanation to those findings.

Some studies have concluded that serum COMP levels vary between sexes and among different ethnicities.(6,24) Indeed, COMP levels may vary in biologic fluids, due to several factors. Therefore, for a correct interpretation of changes in levels of molecular biomarkers, it is important to evaluate other factors that may influence such variation. Our results have shown a significant difference when comparing SF COMP levels among patients and controls, mainly in the female group. A possible explanation to these findings is that female patients were significantly older than female controls and affected males, along with a higher sample size in females compared to males. Moreover, age was correlated to SF and serum COMP levels.

Daytime variation is also an important issue to be considered as the influence of associated activity may modify levels of biomarkers. It has been reported that serum COMP levels remain constant during normal daytime activities (between 8 am and 9 pm) and it is not necessary to standardize the time of serum sampling.(26) Andersson et al.(27) reported that levels of serum COMP may be affected by exercise, especially during the first 30 minutes. Therefore, serum samples for COMP analysis should be drawn after at least 30 minutes of rest. However, the authors concluded that changes in serum levels of COMP are minor and do not compromise the utility of serum COMP as a biomarker. Although authors have demonstrated daytime variation in some related biomarkers in serum and urine,(28) we did not find a modification in serum COMP levels. However, the importance of diurnal variation of COMP levels in SF has not been fully addressed in the literature. In our study, only SF showed a significant increase in COMP levels after 12 pm when comparing groups (mainly in the KOA group), highlighting the importance to consider daytime variation of COMP levels in this biologic fluid to avoid false diagnosis.

Moreover, levels of COMP in SF were increased according to the severity of disease. Also, we found a correlation in SF and diurnal variation (particularly in the KOA group). This modification in SF levels of COMP was possibly due to an increase of activities after 12 pm.

To our knowledge, this is the first study in a Mexican population that compares and correlates SF and serum COMP levels with other important variables such as age, sex, severity of disease, and daytime sampling. We do not underestimate the value of serum sampling. Conversely, we consider that if possible, both biologic fluids should be considered for analysis of biomarkers, including COMP.

Although small size and low correlation indexes may be limitations of this study, we tried to overcome these by recruiting and sampling patients and controls under same conditions and diagnostic criteria. These results may suggest a potential relationship between COMP levels and primary KOA. However, we cannot strongly ensure that COMP is a totally reliable tool for diagnosis of KOA due to the variable nature of serum and SF COMP levels. In addition, an important step in the validation process for OA biomarkers is the knowledge of the variations in their levels in different biologic fluids under different circumstances to contribute to diagnosis, prognosis, preventive medicine, and new drug development for OA. Whenever possible, serum, urine, and SF should be considered for analysis of biomarkers in the study of OA. We believe that a multicentric study with a much larger sample size will be helpful to increase the certainty of these findings.

This study was funded by the Faculty of Medicine Torreon, Autonomous University of Coahuila, Mexico (P/PROFOCIE-2014-05MSIJ0010R-12 to RDA) and Genomic Medicine Institute, Torreon, Mexico.