Objectives: This study aims to evaluate tryptophan degradation and clarify whether altered levels of kynurenine and tryptophan (Kyn/Trp) ratio could be correlated to osteoporotic hip fractures via immune system.
Patients and methods: The study included 60 patients with osteoporotic hip fracture (20 males, 40 females, mean age 76.6±6.9 years; range 59 to 95 years). Patients were divided into two as patients with collum femoris fractures (group 1; n=23) and intertrochanteric fractures (group 2; n=37). Fifteen healthy subjects without any fracture were selected as control group (group 3; 3 males, 12 females; mean age 69.7±8.4; range 60 to 86 years). All fractures were simple falls due to low energy trauma. Bone mineral density measurements were performed with Lunar dual energy X-ray absorptiometry. Kyn/Trp levels were measured by high performance liquid chromatography. Interleukin (IL)-6 and IL-1 beta levels were measured with solid-phase sandwich enzyme-linked immunosorbent assay.
Results: All bone mineral density values were in agreement for osteoporosis and there was no significant difference between the two groups. Higher Kyn/Trp ratios were observed in groups 1 and 2 compared to group 3. This difference was more significant in group 1 (p=0.0001) than that in group 2 (p=0.048). Also, group 1 had significantly higher Kyn/Trp ratio than group 2 (p=0.011). There were significantly higher IL-6 and lower IL-1 beta levels both in groups 1 and 2 compared to group 3 (p=0.0001). There was no significant difference between group 1 and group 2 in terms of IL-6 and IL-1 beta levels. There was positive correlation with Kyn/Trp ratio (r=0.581, p=0.004) in group 2. Also, significant correlation was detected between IL-6 and IL-1 beta levels in the same group (r=0.665, p=0.036).
Conclusion: Both increased degradation of tryptophan and ratio of Kyn/Trp indicate the relationship of immune activation with bone healing.

Osteoporosis-related fractures in females and males are highly dependent on bone mineral density (BMD) which is the gold standard for the diagnosis of osteoporosis but does not directly reflect deterioration in bone microarchitecture.(1,2) The complex pathogenesis of osteoporosis is determined by the interaction of genetic, metabolic, and multiple environmental factors. Besides, free radicals and reactive oxygen species may involve in bone metabolism in which oxidative stress promotes the apoptosis of osteoblasts and the survival of osteoclasts.(3,4) Elderly subjects are at high risk for bone fragility fractures because of senile alterations of BMD, falls, life-style, rate of bone remodeling, changes in the geometry of bone macro- and microstructure, and also changes in nutritional status.(5) Protein deficiency may contribute to the occurrence of hip fractures associated with lower BMD at the proximal femur by reducing muscle strength and impairing movement coordination.(6,7)

Indolamine 2,3-dioxygenase (IDO), first and rate-limiting enzyme of kynurenine (Kyn) pathway, is a tryptophan (Trp) degrading enzyme having immunoinflammatory effects. The cellular immune activation can be either monitored by Trp degradation or kynurenine and tryptophan (Kyn/Trp) ratio.(8) High serum levels of proinflammatory cytokines, cytokine-soluble receptors, and C-reactive protein have been associated with increased risk of fractures.(9-12) The immune system influences differentiation and activity of bone cells within the bone microenvironment.(13,14) Thus, in this study, we aimed to evaluate Trp degradation and clarify whether altered levels of Kyn/Trp ratio could be correlated to osteoporotic hip fractures via immune system.

This prospective cohort study was conducted at Department of Orthopedics and Traumatology, Ankara Training and Research Hospital, September 2006 and September 2008 that included 60 patients with osteoporotic hip fracture (20 males, 40 females, mean age 76.6±6.9 years; range 59 to 95 years). Patients were divided into two as patients with collum femoris fractures (group 1; n=23) and intertrochanteric fractures (group 2; n=37). Fifteen healthy subjects without any fracture and having the same inclusion criteria were selected as control group (group 3; 3 males, 12 females; mean age 69.7±8.4; range 60 to 86 years). All fractures were simple falls due to low energy trauma. None of the patients or controls had neoplastic pathology of bone, long-term corticosteroid usage, bone metabolism disease or arthritis or any other metabolic disease. BMD measurements were performed with Lunar dual energy X-ray absorptiometry. The measurements were performed on the intact side of the hip at fracture groups. BMD measurements were obtained as femoral neck, wards, trochanteric, and total BMD values. The study protocol was approved by the Ankara Training and Research Hospital Ethics Committee (0186/26.04.2006) and a written informed consent was obtained from all subjects before surgical procedures. The study was conducted in accordance with the principles of the Declaration of Helsinki.

Serum Trp and Kyn levels were measured by high performance liquid chromatography with ultraviolet detection. Briefly, 100 μL of the serum sample was mixed with 13 μL 40% perchloric acid for protein precipitation, followed by vortex-mixing for one minute and centrifuged at 15000∞g for 10 minutes at 4 °C. Of the supernate, 10 μL was injected into the high performance liquid chromatography system (Thermo Finnigan Surveyor) for analysis. The chromatographic separation was carried out using the mobile phase consisting of 15 mmol/L acetate buffer (pH: 4.0) and acetonitrile (98:2, v/v) at a flow rate of 0.8 mL/minute. A SupelcosilTM LC-18-DB (Sigma-Aldrich, St. Louis, MO, USA) analytical column (150 mm ∞ 4 mm ID., 3 μm) was used for the analysis. The eluate was monitored by the programmed wavelength detection setting at 360 nm for Kyn and at 278 nm for Trp. The ratio of Kyn/Trp concentrations was calculated to estimate the activity of indolamine 2,3-dioxygenase.(15)

Statistical analysis
All results were presented as mean ± standard deviation as well as median and interquartile ranges. Distribution characteristics of the variables were tested using the Kolmogorov Smirnov test. Statistical comparison between groups was performed with Mann-Whitney U test. The correlations between the independent parameters were assessed by Spearman’s rank correlation analysis. A p value of <0.05 was considered statistically significant. SPSS version 11.5 software (SPSS Inc., Chicago, IL, USA) was used for statistical analysis.

Neck, trochanter, wards, and total BMD values were compatible with osteoporosis and no significant differences were observed between the two groups of patients in terms of all BMD values. The related data was published in our previous study.(16)

Table 1. Biochemical parameters in patients with collum femoris and intertrochanteric fractures, and in heathy controls
× 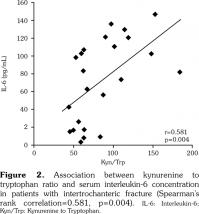 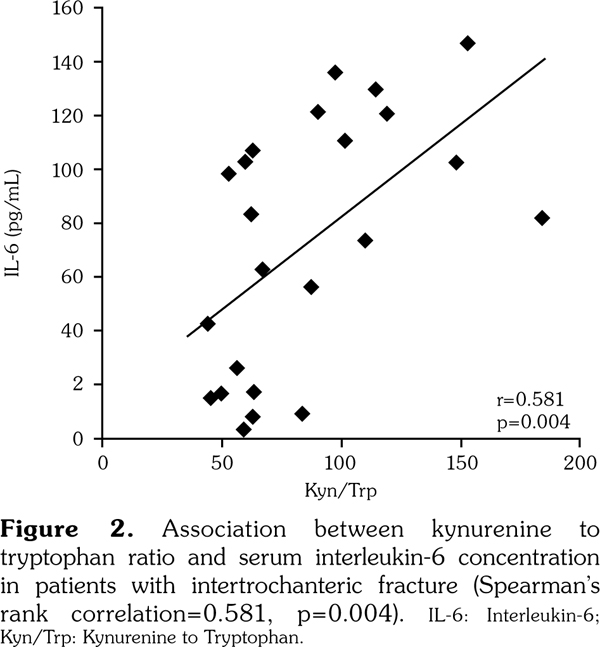 The main findings of our study are increased Kyn/Trp ratio in patients with hip fracture with respect to healthy subjects and in patients with intertrochanteric fracture when compared to those with collum femoris fracture. Since the population of our world is aging, the burden of fragility fractures is a constantly increasing problem. There are many biochemical and physiological changes associated with aging.

In our previous studies, we discussed the risk assessments for hip fractures by proximal femur geometric measurements and genetics.(1,17) Besides in a recent study, we evaluated the bone morphogenetic proteins, mostly focusing on the usefulness of biochemical markers for risk assessment.(16) Here, our goal was to better understand IDO’s role in bone metabolism via two different anatomical types of hip fracture groups compared to healthy control group. Our results indicate that IDO, a known modulator of immune response pathways, can play distinctively depending on the type of fracture which is related with the patient’s general body resistance. Patients with intertrochanteric fracture have higher mortality than patients with femoral neck fracture not depending on the actual side of injury but depending on being older and sicker on admission.(18,19) However, our results showed a significant correlation between Kyn/Trp and age in only patients with intertrochanteric fracture. Vidal et al.(19) presented their study results first in American Society for Bone and Mineral Research 2010 Annual Meeting and emphasized the anabolic effect of interferon gamma to upregulate a set of genes associated with a Trp degradation pathway, in osteogenic differentiating human mesenchymal stem cells and very potent stimulatory effect of interferon gamma on IDO activity. They identified Trp degradation through the Kyn pathway that is exclusively activated in MSC during osteogenic conditions. In accordance with this study, the increased ratio of Kyn to Trp in patients with collum femoris fracture might indicate an osteoblastogenesis with better progress of fracture. An explanation for the higher IDO activity might be activated cellular immunity, which may be the result of an increased level of interferon gamma. Ozkan et al.(20,21) suggested in their previous studies that the altered ratios of Kyn/Trp at cardiovascular disease and rheumatoid arthritis patients were associated with immune and inflammatory states.

Indolamine 2,3-dioxygenase has emerged as a pivotal modulator/regulator of the immune response.(22) IDO helps in activation of T-regulatory cells, resulting in containment of hyperinflammatory responses and inhibition of T-helper 17 cells recruitment.(23) In previous studies, IDO was shown to be a vital enzyme used by cells to modulate the host immune response.(24,25) Also, fracture healing has been divided into three distinct phases as inflammation, regeneration, and remodeling. In accordance with this knowledge, one may suggest imposed/ affected osteoblast/osteoclast, osteoblastogenesis, which can depend on the expression of IDO to induce its antiinflammatory effects via bone resorption and formation.(26) The increased ratio of Kyn/Trp in both fracture patients, which was higher in collum femoris patients than in intertrochanteric fracture patients, may be related with host immune response.

In present study, the Trp concentrations of patient groups were lower than control group, which is compatible with the novel knowledge. As mentioned in different studies,(27-29) the degradation of Trp could be formed around the inflamed surface and it is speculated that the altered expression of IDO might cause the inhibition of inflammatory cascades and prevent or slow down the tissue damage. Although immune function of osteoclasts is not known exactly, their activity can be regulated by activated T cells and their cytokines. Also, in our study, Kyn/Trp ratio was correlated with IL-6 levels in patients with intertrochanteric fractures.

In conclusion, the representativeness of the Kyn/Trp ratio in relation with immune reaction and expression of pro-inflammatory cytokines is still hypothetical; the increased degradation of Trp and the Kyn/Trp ratio may indicate immune activation and increased macrophage IDO activity of a low energy trauma induced osteoporotic hip fracture. These may be the cause or consequence of hip fracture and assist in developing novel therapeutic strategies for human diseases involving both the bone and immune system pathologies.