Objectives: This study aims to detect candidate micro-ribonucleic acids (miRNAs) from microarray within peripheral blood mononuclear cells and synovial fluid mononuclear cells in patients with ankylosing spondylitis (AS).
Patients and methods: Samples from three AS patients (3 males, mean age 37.3±2.5 years; range 35 to 40 years) and three healthy controls (3 males, mean age 39.0±2.6 years; range 37 to 42 years) were obtained for miRNA microarray. The microarray experiment proceeded only when the quality of total RNAs were considered to have “passed”, and their integrity was good by total RNA quality control using Agilent Bioanalyzer 2100. Hierarchical clustering was performed to understand the impact of the storage condition on the miRNA expression profiles. MiScript primer assays were used for semiquantitative determination of the expression of human miRNAs to validate results from miRNA microarray.
Results: A total of 887 miRNAs were screened by microarray among groups. After normalization of the raw data, we noted that the expression of five miRNAs was significantly lower (fold change ≤0.5 and p≤0.05) and only hsa-miR-424-5p was significantly higher in AS peripheral blood mononuclear cell (fold change ≥2 and p≤0.05). In AS synovial fluid mononuclear cells, we identified that expressions of 16 miRNAs were significantly down regulated whereas only hsa-miR-424-5p was significantly upregulated (fold change ≥2 and p≤0.05). All above-mentioned miRNAs were reevaluated for further validation. Finally, significantly increased hsa-miR-424-5p and decreased hsa-miR-377 were found in synovial fluid mononuclear cells from AS patients compared with healthy controls. Based on target prediction programs and published papers, potential target genes and its pathways were screened.
Conclusion: miR-424-5p was increased and miR-377 was decreased in synovial fluid mononuclear cells from patients with AS. These two miRs might have functional roles in patients with arthritis via different pathways.

Ankylosing spondylitis (AS) is characterized by inflammation of the axial skeleton and sacroiliac joints. Peripheral joints and certain extra-articular organs, including the eyes, skin, and cardiovascular system, are affected to a lesser degree.(1) Peripheral joint involvement is a presenting feature in only 10-20% of patients, and occurs during the disease course in 30-40% of patients.(2,3) Disease activity is higher in patients with peripheral joint disease, when compared with patients where the disease is limited to the axial skeleton.(4)

Micro-ribonucleic acids (miRNAs) are noncoding RNA oligonucleotides that have been highly conserved during evolution and have recently emerged as potent regulators of gene expression of posttranscriptional regulators.(5) miRNAs have been identified and appear to be critical for fine- tuning many biological processes, in addition to offering the prospect of multiple targets.(6,7) Emerging data suggests that single miRNA species can profoundly alter the phenotype and outcome of immune responses.(8-10) Although dysregulated expression profiles of miRNAs have been identified in the blood of patients with immune disease,(11) only limited data is available regarding miRNA with regard to AS.(12-14)

Samples from three AS patients (3 males, mean age 37.3±2.5 years; range 35 to 40 years) with peripheral arthritis and three healthy controls (HCs) (3 males, mean age 39.0±2.6 years; range 37 to 42 years) were obtained between December 2011 and January 2012 from Chonnam National University Hospital for miRNA microarray. To validate miRNA expression, samples from 25 HCs, and paired peripheral blood and synovial fluid from 21 patients with AS were obtained. The study was approved by the Institutional Review Board of Chonnam National University Hospital, and written informed consent was obtained from all participants.

Total RNA was isolated using the miRNeasy kit (Qiagen Inc., Valencia, CA, USA). The presence of miRNA in the total RNA was assayed using the Agilent 2100 Bioanalyzer Small RNA assay (Agilent Technologies, CA, USA). The microarray experiment proceeded only when the quality of total RNAs were considered as “passed” and their integrity was good by total RNA quality control using Agilent Bioanalyzer 2100. 100 ng of each RNA sample were hybridized to Agilent Human microRNA Microarray v2.0 (G4470B, Agilent Technologies). MicroRNA labeling, hybridization, and washing were carried out following Agilent’s instructions. Images of hybridized microarrays were acquired with a microarray scanner (Agilent G2565BA), and features were extracted using the agilent feature extraction image analysis tool version A.9.5.3.1. To understand the impact of the storage condition on the miRNA expression profiles, hierarchical clustering was performed. Microarray data were quantile-normalized and analyzed using GeneSpring software (Agilent).

The miScript Reverse Transcription Kit (Qiagen GmbH, Hilden, Germany) was used for complementary deoxyribonucleic acid (cDNA) preparation. MiScript primer assays (Qiagen GmbH, Hilden, Germany) were used for semiquantitative determination of the expression of human miRNAs. The expression of U6B snRNA was used as an endogenous control. A threshold cycle (CT) was observed in the exponential phase of amplification, and quantification of relative expression levels were performed using standard curves for target genes and the endogenous control. Geometric means were used to calculate the ΔΔCT (delta-delta CT) values and were expressed as 2- ΔΔCT. The value of each control sample was set at one and used to calculate the fold-change of the target genes. 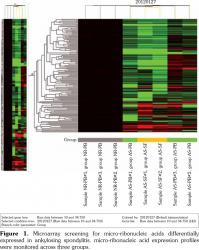 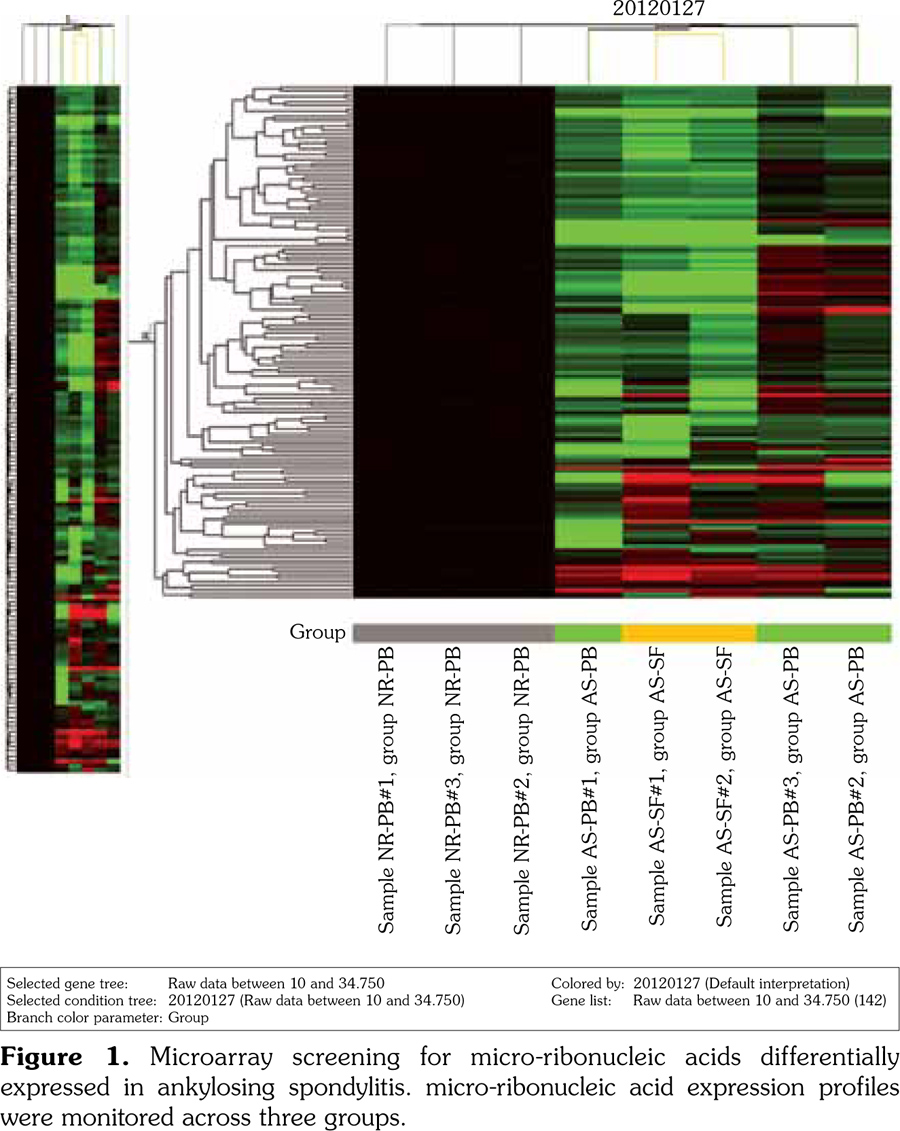 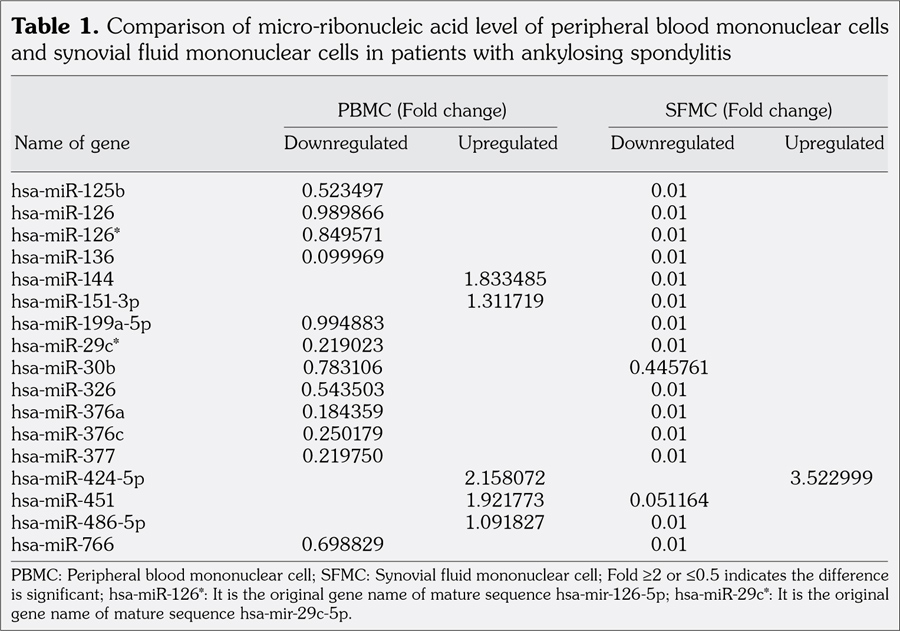 Figure 2. Validation of candidate miRs. Samples from 25 healthy controls (HCs), and paired peripheral blood and synovial fluid from 21 patients with ankylosing spondylitis were obtained. Total ribonucleic acid was collected from each time point. Real-time polymerase chain reaction analysis was performed to determine the expressions of miRs. Values are shown as the mean ± SEM. The Kruskal-Wallis test was used for the comparison of gene expression among groups. Dunn’s test was used post-hoc to compare all pairs of groups. Gene expression was normalized to the U6B snRNA in each sample. PBMC: Peripheral blood mononuclear cell; AS: Ankylosing spondylitis; SFMC: Synovial fluid mononuclear cell; mean ± SEM: standard error of the mean; snRNA: single small nuclear RNA
× 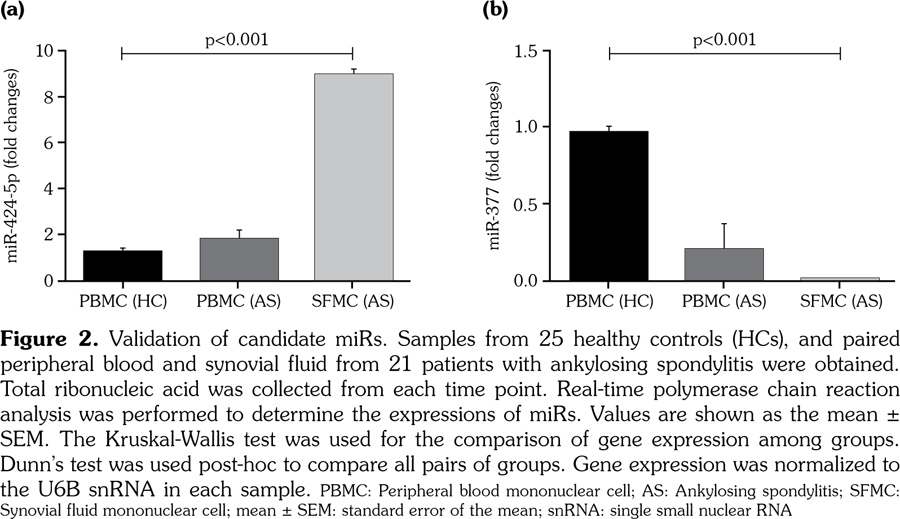 In the present study, miRNAs in the PBMCs and SFMCs of AS patients were comprehensively isolated and analyzed by using miRNA microarray analysis. Through this analysis, we discovered significantly high expression of miR-424-5p and lower expression of miR-377 in SFMCs from patients with AS, compared to HCs.

Based on target prediction programs and published papers, miR-424-5p was highly linked to pathways of hypoxia and the cell cycle. Inflammatory arthritis is a chronic progressive autoimmune disease characterized by the proliferation of synovial tissue. The role of hypoxia in the pathogenesis of inflammatory arthritis has been demonstrated in several in vitro and in vivo studies.(15-17) Hypoxia is a key driving force for angiogenesis and is recognized as an important event in inflammatory arthritis. Several studies have demonstrated hypoxia-inducible factor-1α expression in synovial tissue. It has been revealed in synovial cell cultures, that hypoxia induces key angiogenic growth factors, chemokines, and matrix metalloproteinases.(18,19) Various stresses, including hypoxia, regulate the expression and function of miRNA.(20) For example, a subset of miRNAs induced by hypoxia contributes to the regulation of the broad spectrum of genes regulated by hypoxia. It was reported that miR-424-5p is a critical mediator of oxygen-dependent changes in endothelial cells and is physiologically upreg ulated in tissues undergoing vascular remodelin g and angiogenesis.(21) Cyclin D1, the product of CCND1 gene, is an important regulator of G1 to S phase progression in many different cell types. Cyclin D1, together with its binding partners CDK4 and CDK6, forms active complexes that promote cell cycle progression by phosphorylating and inactivating the retinoblastoma protein.(22) According to our data, miR-424-5p might inhibit cell proliferation, arrest cell cycle progression, and induce cell apoptosis in AS.

Recently, it was published that PPM1A was highly expressed in AS synovial tissue. Moreover, PPM1A detecting antibodies were correlated positively with Bath Ankylosing Spondylitis Disease Activity Index score.(23) Given the result from our data, decreased expression of miR-377 in SFMCs might contribute to increase levels of PPM1A in AS synovium. The expression of PAK1 was increased in rheumatoid arthritis fibroblast- like synoviocytes fibroblast-like synoviocytes. PAK1 plays an important role in regulating the migration, invasion and production and activity of matrix metalloproteinases in fibroblast- like synoviocytes, which is mediated by the c-Jun N-terminal kinase pathway.(24) This might suggest that hsa-miR-377 has a role on PAK1 expression in arthritis of AS, although there is no report of PAK1 in AS.

In conclusion, miR-424-5p was increased and miR-377 was decreased in SFMCs from patients with AS. These two miRs might have functional roles in patients with arthritis via different pathways. However, further research is necessary to ascertain whether miR-424-5p and miR-377 can truly have functional roles in AS patients with peripheral arthritis. Due to the small sample size, further validation of other candidate miRNAs from this microarray assay should be carried out. Nevertheless, data from this microarray may provide important information for research on miRNA in AS.

This study was supported by grants from the National Research Foundation of Korea (NRF) funded by the Ministry of Education, Science, and Technology (grant no. 2011-0008867), by the Chonnam National University Hospital Research Institute of Clinical Medicine (grant no. CRI 11074-21).