Familial Mediterranean fever (FMF) is a monogenic autoinflammatory disease, characterized by recurrent self-limited episodes of fever and unprovoked inflammation resulting in pain which is localized in the abdomen, chest and joints, which last one to three days.(1-3) Mutations in the Mediterranean Fever gene, encoding pyrin- marenostrin protein, cause FMF disease.(4,5) Pyrin protein acts as a regulator of the inflammatory response in innate immune system. Although the nature of this regulation is not revealed precisely, pyrin, within a complex called inflammasome, serves as a regulator of the conversion of pro-interleukin (IL)-1β to mature IL-1β.(6,7)

During inflammation episodes, neutrophils migrate into serous cavities and the levels of acute- phase inflammatory products, including serum amyloid A and C reactive protein,(8) and cytokines including IL-6,(9,10) IL-8,(10) IL-17(11) and IL-18(11,12) increase. Besides these findings, it has been reported that substantial subclinical inflammation occurs during attack-free periods in patients with FMF and oxidative stress and oxidant/antioxidant imbalance might play a role in this persistent subclinical inflammation.(8-12)

Oxidative stress has an important role in the pathogenesis of atherosclerosis.(20) In the innate immune response, macrophages play a major role through the generation of reactive oxygen species (ROS) like superoxide, nitric oxide, hydroxyl radical, hydrogen peroxide, hydrochlorous acid, and peroxynitrite.(21) Chronic inflammation may lead to cell damage or cellular hyperplasia and inflammatory cells produce excess amounts of ROS. The overproduction of free radicals and decreased antioxidant enzyme production are responsible for cellular adverse effects of chronic inflammation including atherosclerosis.(22)

In addition to their ability of conjugation of non-polar compounds carrying electrophilic centers (i.e; xenobiotics, drugs, pesticides) to glutathione, glutathione-S-transferases (GSTs) contribute to the detoxification of endogenously produced ROS via their glutathione peroxidase activity.(23) Glutathione acts on eliminating ROS through the action of glutathione peroxidase and (GST).(24) Although there are many polymorphisms in GST genes, studies generally focused on the GSTT1, GSTM1, and GSTP1 polymorphisms.(25)

Therefore, in this study, we aimed to evaluate the CIMT in patients diagnosed with FMF and investigate whether is there a relationship between GST gene polymorphisms and CIMT.

Our case-control study protocol was approved by Cumhuriyet University Institutional Ethics Committee and performed in accordance with the Helsinki declaration between 2012 and 2013. Sixty FMF patients (17 males, 43 females; mean age 31.43±11.36 years; range 18 to 45 years) who applied to Department of Internal Medicine, Faculty of Medicine, Cumhuriyet University were included. All patients satisfied the Tel-Hashomer FMF diagnosis criteria and were on regular colchicine treatment. The control group contained 60 healthy controls (22 males, 38 females; mean age 29.8±5.82 years; range 18 to 40 years). An informed consent and a standardized questionnaire regarding presence of diabetes mellitus, hypertension, and smoking were obtained from all subjects.

were established as initial denaturation step of 5 minutes at 94 °C, followed by 5 cycles in which the annealing temperature decreased by 1 °C each cycle (cycle 1: 30 seconds at 94 °C, 30 seconds at 64 °C, and 30 seconds at 72 °C) and followed by another 25 cycles, 30 seconds at 94 °C, 30 seconds at 59 °C, and 30 seconds at 72 °C, with a final elongation step of 5 minutes at 72 °C. A 433bp and 420bp DNA fragment was amplified for I105V and A114V polymorphisms, respectively.(26) I105V and A114V PCR products were digested with 5U BsmAI (Fermentas, Lithuania) and 5U AciI (Fermentas, Lithuania) restriction endonuclease at 37 °C for 16 hours, respectively. The digestion products were visualized in 3% agarose gel. For genotyping I105V polymorphism, the wild type genotype (Ile/Ile) showed 328 and 105 bp fragments, while the mutant genotype (Val/Val) showed 222, 106, and 105 bp fragments. For A114V polymorphism, the wild type Ala/Ala genotype, the digestion yielded bands at 246bp, 116bp, and 58bp; for Val/Val mutant genotype, digestion yielded bands at 362bp and 58bp. Homozygous mutant genotype was not detected in our FMF and control groups for A114V polymorphism.

Statistical analysis
All statistical analyses were performed by SPSS version 22.0 (SPSS IBM, Armonk, NY, USA). For the comparison of independent samples, independent samples T test was used if the data were normally distributed, whereas the Mann-Whitney U test was used if the data were not normally distributed. The chi-square test or Fisher’s exact test was used in the comparison of categorical data between FMF patients and controls. All demographic and quantitative data were expressed as mean ± standard deviation. P values of less than 0.05 were regarded as significant and all results were expressed with a 95% confidence interval.

There were no significant differences between the FMF and control groups in terms of mean age (p=0.324) and sex (p=0.823). Rates for smoking were 20% and 15% in the FMF and control groups, respectively and the difference between two groups was not statistically significant (p=0.471). Number of attacks per month was ≥3 for two patients (3.3%), 1 for 24 patients (40.0%), and <1 for remaining 34 patients (56.7%). Demographic characteristics of FMF patients and controls are shown in Table 1. 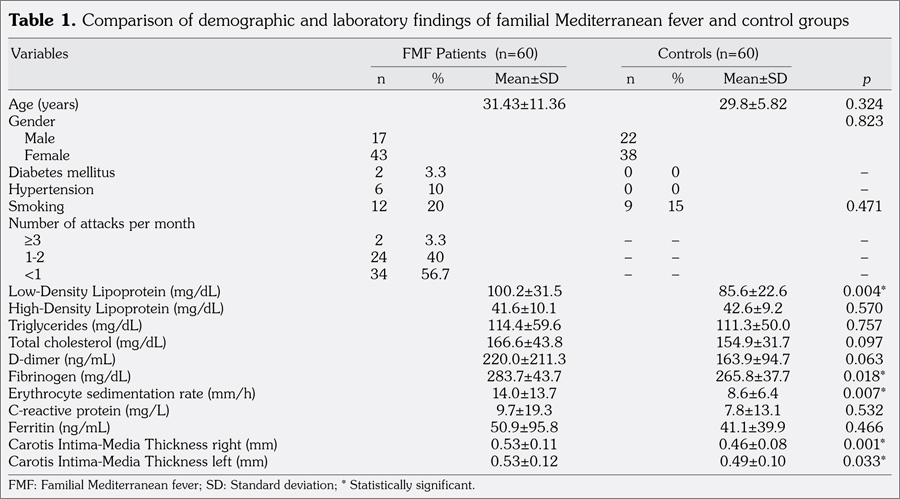 Carotid intima-media thickness was measured at intervals 0.4-0.9 mm in the FMF patients and 0.3-0.7 mm in the controls. Right and left CIMT of patients were statistically significantly higher than that of controls (CIMT right: p=0.001; CIMT left: p=0.033) (Table 1).

Subjects in the FMF and control groups were evaluated in terms of the GSTT1, GSTM1 and GSTP1 I105V, and A114V gene polymorphisms. In the FMF and control groups, GSTT1 null allele frequencies were 18.3% (n=11) and 13.3% (n=8), respectively. GSTM1 null allele frequencies in the patients and controls were detected as 50% (n=30) and 56.7% (n=34), respectively. The difference between two groups was not statistically significant in terms of GSTT1 and GSTM1 gene polymorphisms (p>0.05). GSTP1 Ile105Val polymorphism frequencies were 55% (n=33), 36.7% (n=22), and 8.3% (n=5) for Ile/Ile wild type, Ile/Val heterozygous, and Val/Val mutant homozygous in FMF patients, respectively. Frequencies of Ile/Ile, Ile/Val, and Val/Val genotypes were 63.3% (n=38), 33.3% (n=20), and 3.3% (n=2) in controls, respectively. No homozygous mutant genotype was detected for Ala114Val polymorphism. Ala/Val heterozygous genotype was detected in eight of FMF patients and seven of control subjects. Distribution of allele frequencies of two GSTP1 polymorphisms was also not statistically significant (Table 2). 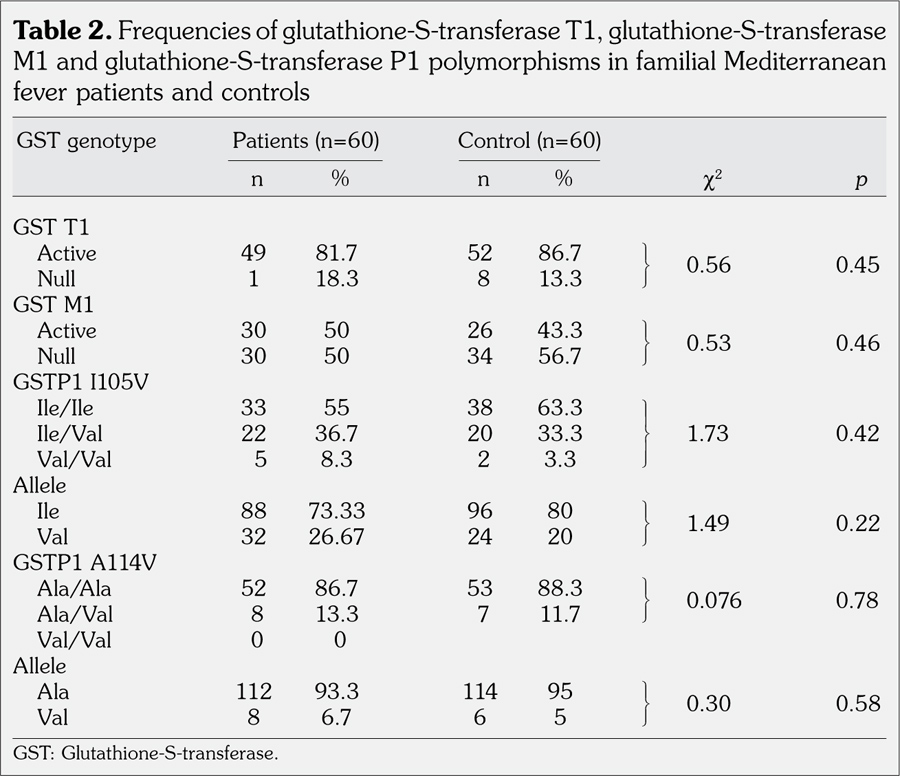 The relationship between CIMT values and GSTT1/M1 genotypes was not statistically significant (p>0.05). Additionally, both GSTP1 I105V and GSTP1 A114V polymorphisms did not show any significant association with CIMT values (p>0.05) (Table 3). 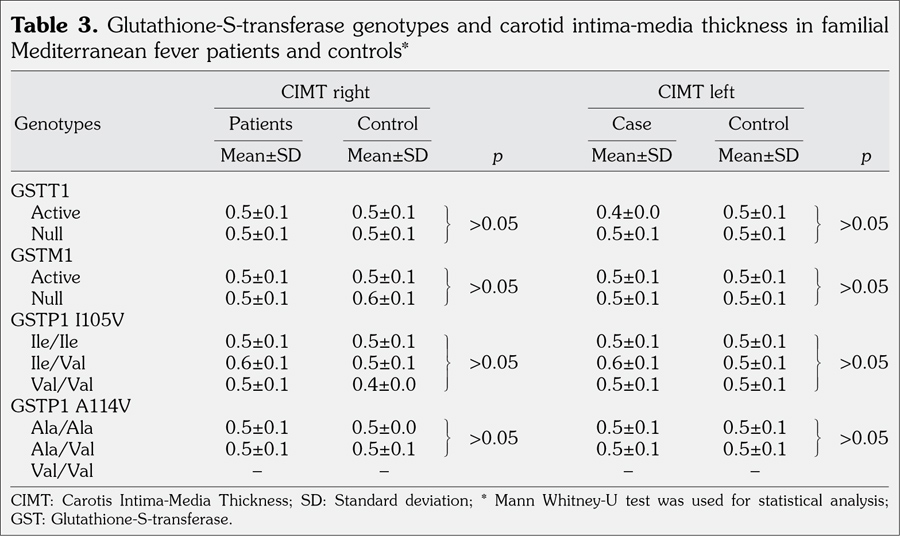 Combined genotype analysis was performed for GSTT1/M1 and two polymorphisms of GSTP1 gene. No significant association was detected between combined GST genotypes and subjects (p>0.05). Combined mutation analysis results are shown in Table 4. The possible association between combined genotypes and CIMT, and triple genotype analysis was not investigated because of the possibility of low statistical power. 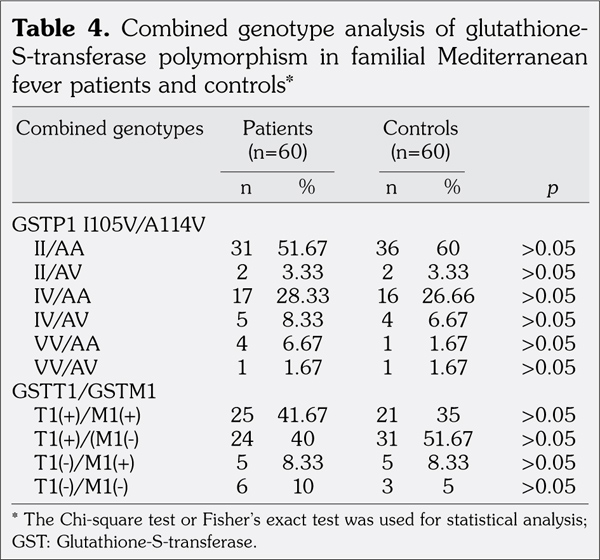 Familial Mediterranean fever is a genetic based autoinflammatory disease, prevalent among the eastern Mediterranean region, particularly Armenians, Jews, Arabs, and Turks.(27) The hallmark of the disease is recurrent, self-limiting febrile episodes of serosal and synovial inflammation and attack-free periods. Although precise mechanism of the disease has not yet been determined, mutations of pyrin protein which is encoded by Mediterranean Fever gene taking part in regulation of innate immune system is responsible for this disease.(1)

During inflammatory episodes, high number of abnormally activated polymorphonuclear neutrophils and monocytes circulate and influx into the affected sites.(28,29) Neutrophils are responsible for endothelial dysfunction, oxidative stress, and over production of adhesion molecules.(30) Moreover, attack-free periods of FMF are characterized by subclinical inflammation.(10,11) It was shown that serum IL-17 and IL-18 levels of FMF patients are higher than healthy controls both during acute phase and attack-free period.(11) IL-8 has proatherogenic effect via inflammasome activation in paracrine proinflammatory pathway.(31)

In our study, CIMT was significantly higher in patients with FMF. This finding supports the existence of subclinical inflammation in FMF patients. To our knowledge, all of the studies investigating the relationship between FMF and CIMT were conducted in Turkey. In a study which has been carried out in the western part of Turkey, Sari et al.(39) have found no differences in the values of right, left, and averaged CIMT between 61 adult patients with FMF on regular daily colchicine treatment and controls. In another study conducted in the central part of Turkey, Akdogan et al.(40) studied 43 adult FMF patients and found that CIMT was increased in FMF patients compared to healthy controls. However, they demonstrated no difference between colchicine responder and non-responder patient groups in terms of maximum CIMT values. Also, Ugurlu et al.(41) have reported increased CIMT and dyslipidemia in 100 adult FMF patients. The discrepancy between these studies probably results from regional and socioeconomic differences of central and western part of Turkey.

In many disorders including atherosclerosis, cancer, allergy, and autoimmune diseases, toxic oxidative stress is caused by free radicals.(43) GSTs are well known phase II detoxification enzymes which catalyze reactions between reduced glutathione and electrophilic substrates.(23) Miller et al.(44) have suggested that certain GST genotypes, particularly GSTM1 and GSTT1, are associated with inflammation, hemostasis, and endothelial function by reducing the oxidative damage. Studies evaluating the relationship between GST gene polymorphisms, inflammation, and carotid atherosclerosis have generally focused on smoking.(44) It has been shown that smokers carrying the GSTM1 and/or T1 null genotype have higher risk of developing atherosclerosis and coronary heart disease.(45,46) Additionally, in a study conducted in Taiwan, Wang et al.(47) have shown that GSTP1 polymorphism increased the risk of carotid atherosclerosis.

Despite presence of studies on CIMT values of patients with FMF in the literature, we found no studies investigating the associations of GST polymorphisms and CIMT in FMF patients. To our knowledge, our study is the first on this issue. Guzel et al.(48) measured the levels of certain antioxidant markers including GST and showed increased oxidative stress and acute phase response during the attacks in FMF patients. Ediz et al.(49) have measured the levels of some antioxidant markers in serum and whole blood of FMF patients in FMF-attack period and FMF-attack-free period and suggested that patients in FMF-attack period has increased level of oxidative stress.

Erden et al.(50) showed that colchicine which is used in treatment of knee osteoarthritis increases the total antioxidant capacity and decreases malondialdehyde levels. In in vitro studies, especially those performed with the multidrug resistant cell lines, it has been demonstrated that colchicine increases the glutathione level and GST activity.(51-53) Therefore, colchicine therapy may be responsible for less aggressive course of atherogenesis in most studies on FMF.(37)

Our study has some limitations. Firstly, our FMF patients have received colchicine treatment regularly. Therefore, we were unable to compare results of colchicine responders and non- responders within FMF patients according to the GST genotypes. In addition, colchicine treatment probably enhances oxidative stress markers such as glutathione and GST, and protects the FMF patients from the harmful effects of inflammation. We did not measure the levels of glutathione or other oxidative stress markers and GST activity.

In conclusion, right and left CIMT of FMF patients were statistically significantly higher than that of control group. There were no statistically significant differences in terms of GST polymorphisms between FMF patients and controls. Moreover, no significant difference was observed between GST polymorphisms and CIMT. In line with other studies, our study has indicated that there are cardiovascular results of subclinical inflammation in FMF. Large and homogeneous cohorts are required for clarifying the explicit relationship between oxidative stress caused by subclinical inflammation and its cardiovascular effect in FMF patients.

This work is supported by the Scientific Research Project Fund of Cumhuriyet University under the project number “T-515”.