Are We Able to Suppress Disease Activity Adequately in Patients With Established Rheumatoid Arthritis? An Observational and Cross-Sectional Study

In light of advances in rheumatoid arthritis (RA) treatment, therapeutic decision making is now based on the concept of treat-to-target, and the target is to achieve remission.(1) Although remission is the leading target, low disease activity (LDA) is also considered an acceptable disease activity status in patients with longstanding RA.(2)

The real-life data of patients with RA suggest that a considerable proportion of patients do not achieve disease remission or LDA.(2,3) This statement is also true for Turkish RA patients who participated in a multicenter study based on the RA registry of the Turkish League Against Rheumatism.(4) The proportion of remission or LDA for each center was not reported in this multicenter study. The first step to avoid barriers to achieving treatment target in RA patients may be to reveal rate of treatment success in a rheumatic disease clinic. Thus, in this study, we aimed to explore the current disease activity status and simultaneous pharmacological therapies in patients with established RA to determine the extent to which treatment targets are achieved.

A total of 100 patients (7 males, 93 females; median age 57 years; range 31 to 76 years) with established RA were included in this observational, cross-sectional study. The study was approved by the local ethical committee (decision number: 8/10.02.2015).

Rheumatoid arthritis patients with a disease duration longer than 12 months, who had been taking a conventional synthetic disease-modifying antirheumatic drug (csDMARD) and/or biological disease-modifying antirheumatic drug (bDMARD) for at least three months, and had a recorded visit within the previous three months at the time of data collection were enrolled. Demographic characteristics of the patients, disease duration, tender and swollen joint count, patient and provider global assessment of disease activity, and C-reactive protein level were recorded.

The Simplified Disease Activity Index (SDAI) was used to measure the most-recent disease activity. Patients were categorized into four groups according to the SDAI scores as follows: remission, LDA, moderate disease activity (MDA), and high disease activity (HDA). Threshold values for remission, LDA, and HDA were 3.3, 11, and 26, respectively.(5) Patients with missing data for any of the variables required to calculate the SDAI were excluded from the analysis. Thereafter, patients were categorized into two subgroups as remission/LDA subgroup and MDA/HDA subgroup.

Statistical analysis
MedCalc Statistical Software version 14.12.0 (MedCalc Software bvba, Ostend, Belgium) was used for statistical analysis. The two subgroups were compared in terms of disease duration, age, medications, and each dimension of the SDAI. In the comparison of the subgroups, Mann-Whitney U test was used for numerical variables, and the continuity correction chi-square test or Fisher’s exact test was used for categorical variables. To calculate the minimum required sample size (α: 0.05, power: 80%), we used the results of the study of Bal et al.(4) To the best of our knowledge, the study of Bal et al.(4) which was based on the Turkish League Against Rheumatism RA registry data had the largest sample size of those conducted in Turkey, with 2,359 participants and mean disease duration of 11.9±8.7 years. In the same study,(4) the overall proportion of patients with remission and LDA was 32% (n=744). When the expected rate of remission/LDA was determined as 50%, the minimum required sample size was 61. In the cases of 35%, 40%, and 45% of the expected rate, the minimum required sample sizes were 1,980, 294, and 115, respectively. There were some limitations when it came to calculating sample size. While we evaluated disease activity via the SDAI, Bal et al.(4) used the Disease Activity Score with 28 joints including the erythrocyte sedimentation rate. Using diverse indices to evaluate the disease activity may lead to incorrect sample size estimation because of discrepancies between the indices.

The median disease duration was 120 (range 12 to 420) months. In the comparison of subgroups, while the median age was significantly higher in the MDA/HDA subgroup (p=0.031), disease durations were comparable (p=0.992). The median SDAI score was 11 (range 0 to 57.5). Demographic and clinical characteristics of patients are presented in Table 1.

Table 1. Demographic and clinical characteristics of total patient population and each subgroup
×

Figure 1. Proportions of patients in each disease activity category.
× 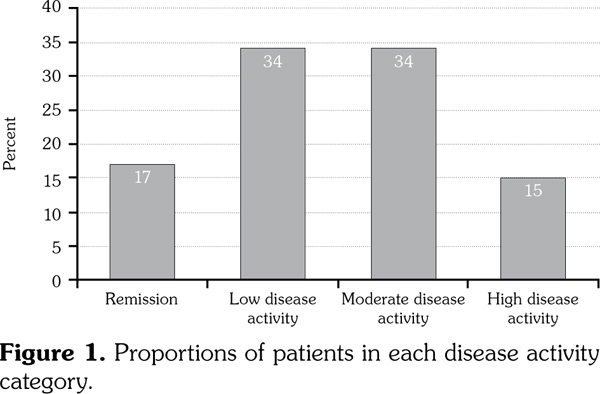 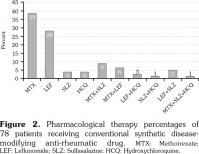 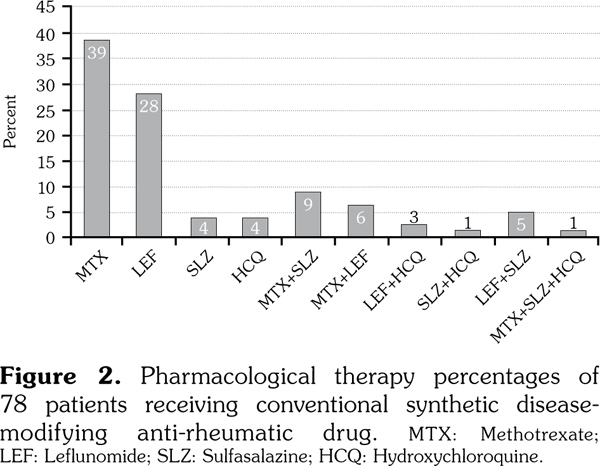 Of a total of 100 patients, 50% were being treated with MTX with a median dose of 15 mg/week (range 7.5 to 20), and 45% were being treated with methyl prednisolone with a median dose of 4 mg/day (range 1 to 16). The number of patients receiving sulfasalazine was significantly higher in patients with MDA/HDA (p=0.046). The frequencies of patients receiving DMARD according to disease activity state are presented in Table 2.

Since the characteristics of patients in real- life practice are generally different from those in clinical trials, making treatment decisions in routine clinical care is challenging.(2,3) Our results demonstrated that a state of remission or LDA was achieved in half of the patients in our real-life clinical practice. MTX and LEF were the most frequently preferred csDMARDs. Nineteen percent of patients were receiving bDMARDs; of these patients, only 42% were in the remission/LDA subgroup.

Although the primary target is remission in the management of early RA, the achievement of remission or LDA is also acceptable in longstanding, established RA. In particular, achieving a better clinical outcome in terms of favorable functional improvement and preventing the progression of the structural damage of affected joints are important in clinical practice.(6,7) LDA is associated with favorable functional outcomes and less structural damage than MDA and HDA, but with worse outcomes than remission.(2)

Some barriers to the control of disease activity have been identified. Comorbidities, older age, irreversible joint damage, patient- driven preference, safety concerns, and resistant disease might hamper management of the disease.(9,10) Although not the focus of our study, some barriers including increased disease duration and inadequate medication

were also identified. DMARDs may lose efficacy over time or patients may develop intolerance to them.(10) Increased disease duration has been suggested to be associated with a poor clinical response to DMARDs, including MTX.(11) In the present study, we also found that the proportion of patients receiving MTX decreased as the disease duration increased. This result might be associated with a lack of responsiveness to treatment by MTX and/or to adverse events related to MTX medication.

The performance of disease activity measurement tools used in RA in defining remission, in particular, is rather different.(12) Although Disease Activity Score 28 is used for the prescription of bDMARDs in Turkey, in this study, disease activity was assessed using the SDAI, which is the most stringent index for defining remission. Both the American College of Rheumatology and European League Against Rheumatism recommend using the SDAI or a Boolean-based definition of remission.(13) The dimension of ‘patient global assessment of disease activity’ of the composite indices used in RA may be influenced by non-inflammatory pain syndromes such as fibromyalgia and depression, particularly in patients with long-standing disease.(9,10)

The management of RA depends primarily on the use of DMARDs,(2) MTX being the anchor drug.(14) Maximization of treatment effects includes reaching an optimal MTX dose within a few weeks and maintaining the maximal dose (25-30 mg weekly) for at least eight weeks.(15) In cases of MTX contraindications or early intolerance, LEF or sulfasalazine should be considered as part of the first treatment strategy. Combination therapy with csDMARDs should also include MTX.(2) In our study, the main csDMARD used was MTX in accordance with the recommendations, the maximal dosage of MTX was not reached or maintained. Only five out of 50 patients were treated with the maximum MTX dosage of 20 mg/week. Inadequate MTX dosage might be one of the barriers to optimal control of the disease activity for RA patients in our study. The second most frequently used csDMARD in our study was LEF.

In contrast to the European League Against Rheumatism recommendation,(2) in which lower- dose glucocorticoids are considered as part of the initial treatment strategy for early RA, a considerable proportion of our patients, who all had established RA, were treated with glucocorticoids. The prescription of glucocorticoid increased as disease activity increased.

Although the ratio of remission or physical independence has increased with bDMARDs, treatment responses in most patients using these drugs do not meet the goal of good response or remission.(16) Older age, low functional status, and concomitant prednisolone treatment have been suggested as negative predictors of a clinical response and remission.(17) Our results demonstrated that 58% (n=11) of the patients receiving bDMARDs had MDA or HDA status. These patients in the MDA/HDA subgroup did not exhibit differences from those receiving bDMARDs in remission/LDA subgroup in terms of age and concomitant glucocorticoid use.

This study has some limitations. Although our sample size was adequate to use the results of Bal et al.(4) to calculate the appropriate number of patients, the minimum required size might change if the data of another RA registry were used. In a study population consisting of patients with early RA, the proportion of medications used and the proportion of the patients in each disease activity category may differ. Although one of the inclusion criteria was that the same medication must have been used for at least three months, we did not include data on how much time had elapsed after the onset of treatment. For a patient with HDA, receiving the same medication for three months may not be adequate when it comes to evaluating the usefulness of the treatment if there is a moderate response to it. Disability may lead to higher disease activity measurement despite the low inflammation. Lack of information about the functional status of the patients is another limitation of our study.

In conclusion, the results of this study demonstrated that a significant part of the patients with established RA was not in the state of remission or LDA. The MTX dosage was lower than that in the recommendations. Moreover, the treatment duration for glucocorticoid was quite long. More than half of the patients receiving bDMARDs still had MDA or HDA. In addition, some patients were treated with csDMARDs and glucocorticoids despite needing biological treatment. Even if a therapeutic decision is based on the concept of treat-to-target in the recommendations, the concept of treat-to-symptom is still prevalent in real-life practice. When considered all together, there is an unmet need for treatment, which may result from some barriers to effective therapy. Determining the proportion of patients achieving the treatment target in established RA might be the first step in identifying and avoiding these barriers. Further studies with the aim of determining the population specific barriers that are responsible for higher disease activity might provide the clinicians with a strategy to take precautions during RA management.