Objectives: This study aims to evaluate the biomarkers of bone formation and resorption to determine the mechanism of bone deformities in patients with rheumatoid arthritis (RA).
Patients and methods: Thirty patients (9 males, 21 females; mean age, 51.5 years; range 23 to 73 years) with RA and 19 healthy individuals (7 males, 12 females; mean age 51 years; range 24 to 61 years) were included in this study. Patients with RA were subgrouped according to disease activity (active, n=21, mean age 53.0; range 37 to 73 years; inactive, n=9, mean age 46.0; range 23 to 62 years). Levels of receptor activator of nuclear factor kappa B ligand (RANKL), osteoprotegerin (OPG), tartrate-resistant acid phosphatase-5b, tumor necrosis factor-alpha (TNF-α), cathepsin-K, and activity of matrix metalloproteinase-3 (MMP-3) were measured in patient and control groups with enzyme-linked immunosorbent assay method.
Results: Levels of RANKL, OPG, cathepsin-K, TNF-α and MMP-3 activities of the patients were significantly higher when compared with the controls (p<0.05). A comparison of the active and inactive patients with RA revealed that OPG levels and MMP-3 activities were significantly higher in active group than inactives (p<0.05), while there was no significant difference in TNF-α, RANKL levels, and tartrate-resistant acid phosphatase-5b and cathepsin-K activities between two groups (p>0.05).
Conclusion: Increased RANKL, OPG, TNF-α, cathepsin-K levels and MMP-3 activities in RA patients demonstrated that these parameters are related to bone deformities which occur in the process of RA. Widespread use of these parameters may be beneficial for the early diagnosis and effective treatment of RA and similar diseases resulting in bone deformities in the future.

Rheumatoid arthritis (RA) is a common chronic autoimmune disorder characterized by synovial inflammation. Bone loss in the inflamed joints occurs in the early stage of the disease, followed by the destruction of articular cartilage and bones.(1,2) The pathogenesis of this disabling disease is not well understood, various genetic, epigenetic and environmental factors are thought to play a role in the establishment of RA.(3)

An abnormal proliferation of T cells which causes differentiation and maturation of osteoclasts is an important characteristic of RA. T cells secrete soluble cytokines such as receptor activator of nuclear factor kappa B ligand (RANKL), tumor necrosis factor alpha (TNF-a) and thereby directly induce the formation and differentiation of osteoclasts.(4) RANKL is critical for the bone resorption process. It interacts with its receptor activator of nuclear factor kappa B (RANK) and so stimulates osteoclast migration, fusion, activation and survival.(5,6) Osteoprotegerin (OPG) is a soluble glycoprotein which blocks the RANKL/RANK interaction and inhibits the activation of osteoclast.(7) It is a protein with homology to members of the TNF receptor family and secreted by many cell types in addition to osteoblasts.(8)

Cathepsin K is a tissue specific protease. Since cathepsin K plays an essential role in osteoclast function and in the degradation of protein components of the bone matrix, it has an important role in bone remodeling and resorption in diseases such as osteoporosis and inflammatory arthritis.(9,10)

Matrix metalloproteinases (MMPs) are critically involved in extracellular matrix breakdown and production, act as key mediators of the resorption of cartilage, bone and synovial fluid.(11) MMP-3 can degrade many components of the extracellular matrix, and plays a key role in cartilage and joint destruction.(12)

Tartrate-resistant acid phosphatase (TRAP) belongs to a family of acid phosphatase isoenzymes found in bone, and is an iron-containing enzyme expressed in bone resorbing osteoclasts.(13,14) Human TRAP exists as two distinct isoforms, 5a and 5b. TRAP-5b is derived from osteoclasts, and has been used as a potential marker to assess the bone resorption rate.(14)

Tumor necrosis factor is one of the more potent osteoclastogenic cytokines produced in the setting of inflammation that plays an important role in the pathogenesis of autoimmune inflammatory diseases. TNF-a is an activating factor for the osteoclast and key mediator of inflammation process in patients with inflammatory arthritis.(15,16)

Various studies have aimed to clarify the mechanisms of bone deformities in RA. To the best of our knowledge, the levels of OPG, RANKL, TRAP-5b, TNF-a, cathepsin K and MMP-3 activity in RA have not been studied together. Therefore, in this study, we aimed to evaluate the biomarkers of bone formation and resorption to determine the mechanism of bone deformities in patients with RA.

Patients were selected according to the American College of Rheumatology criteria.(17) Before the study, a complete blood count, routine biochemical analyses, C-reactive protein (CRP) level and erythrocyte sedimentation rate (ESR) testing were performed in all patients. None of the patients had any other systemic disease. Other exclusion criteria were systemic steroid usage, menopause, cigarette smoking or excessive alcohol usage.

Statistical analysis
Statistical evaluation was carried out with the SPSS version 15.0 software program (SPSS Inc., Chicago, Illinois, USA). For comparison of all the variables between patient and control groups, Student’s t-test was used. Mann Whitney U test was used for non-normally distributed parameters. Spearman correlation analysis was used to explore correlations between the variables. Data were presented as mean ± standard deviation. P value less than 0.05 was considered as statistically significant.

There was no statistical difference in age and sex distribution between controls and patients, and also among RA subgroups (p>0.05). Serum OPG, RANKL, TNF-a levels and MMP-3, cathepsin K activities were significantly higher in patients with RA than in the controls (p<0.001, p<0.035, p<0.002, p<0.001, p<0.001, respectively). No difference in TRAP-5b activities was observed between the patient and the control groups (p>0.05) (Table 1). 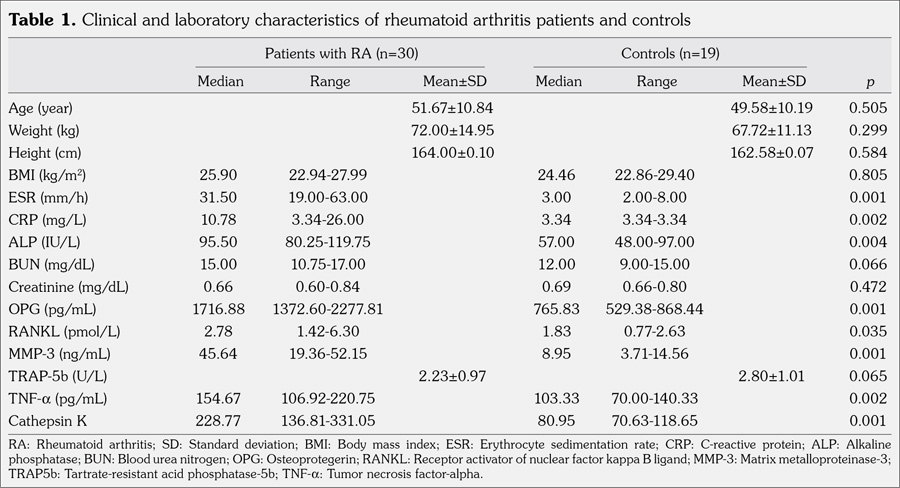 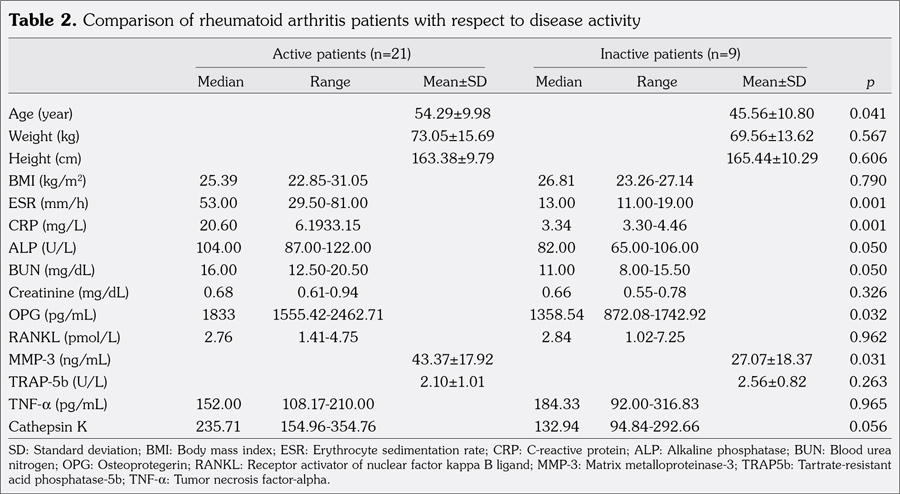 According to the results of correlation analyses in patient group, there was no correlation between inflammatory parameters of CRP and ESR, and OPG, RANKL, TNF-a, MMP-3, and cathepsin K.

Rheumatoid arthritis is a common systemic autoimmune disease characterized by the destruction of articular cartilage and bone. It has been shown that osteoclasts were responsible for bone destruction in RA patients,(19) and for osteoclast differentiation, an increase in RANKL secretion is necessary.(4) OPG acts as an effective inhibitor of osteoclast activation and bone resorption by binding with high affinity to RANKL.(6) Our data demonstrated that the serum levels of RANKL and OPG were significantly higher in patients with RA than the controls, indicating that the RANKL-OPG system plays a critical role in the pathogenesis of RA. Elevated serum levels of RANKL and OPG have been reported in patients with RA previously.(20,21) We also found significantly elevated OPG level in active group than inactives. Based on the results of our study, it is possible that a higher amount of sRANKL requires more OPG to block its biologic activity. To compensate the RANKL-mediated bone degradation, OPG overproduction occurs due to its protective role. In contrast to our study, Xue et al.(22) reported decreased levels of OPG in RA patients.

We evaluated TNF-a levels, a proinflammatory cytokine, and its correlation with other parameters, because TNF-a has an important role in RA. The authors(23,24) reported that TNF-a aggravates the inflammation response, and leads to the acceleration of joint cartilage destruction. Moreover, particularly interleukin 17 and TNF-a together show a synergistic effect during the early phase of RA, and the levels of these two cytokines are closely associated with joint deterioration.(23) In accordance with these findings, we observed higher levels of TNF-a in RA patients than the controls. Therefore, this cytokine is involved in bone damage in RA patients. Since TNF-a stimulates the expression of RANKL on the cell surface of mature osteoclasts,(24) the increased serum level of this cytokine accompanying with RANKL is a significant finding of the present study.

Matrixmetalloproteinases contribute to joint damage and are considered the most important matrix-degrading enzymes in RA.(25) MMP-3 (also known as human fibroblaststromelysin) is a secreted metalloprotease which plays role in the destruction of cartilage and bone in RA.(26) MMP-3 activity, which originates directly from the inflamed joints, was significantly higher in RA patients in this study. This result was similar with the data reported on Nah et al.’s study.(25) Since MMPs are produced by fibroblasts, macrophages, synovial cells and chondrocytes in response to proinflammatory cytokines such as TNF-a,(27,28) we thought that increased MMP-3 activity may be secondary to elevated TNF-a level in RA. In this study, MMP-3 activity was much higher in active group than inactive group. Consequently, we suggest that MMP-3 activity provides information about the activity of RA.

Our results demonstrate that cathepsin K is elevated in the serum of patients with RA compared with that of a healthy control group. It is well accepted that cathepsin K is the major osteoclastic proteolytic enzyme responsible for bulk collagen degradation during bone remodeling. Wittrant et al.(30) demonstrated OPG to be an inhibitor of cathepsin K. Human OPG inhibits cathepsin K and TRAP, both osteoclast markers. Whereas proinflammatory cytokines such as TNF-a induce the expression of cathepsin K.(31) Consequently, increased cathepsin K activity in the sera of patients with RA may be related to increased TNF-a in this study. Our results were in accordance with the literature.(32)

Our study has some limitations. Firstly, the parameters analyzed were bone destruction markers, thus this study would be more useful and valuable if we had assessed patients radiologically. However, we were unable to evaluate association of these parameters with radiographic erosion due to the limited study time. Secondly, although RADAI, which was used for the assessment of disease activity, is an index correlating with Disease Activity Score in 28 joints, its association with bone destruction is controversial.(33) For this reason, we did not evaluate the relationship of RADAI and bone destruction markers.

Based on the results of our study, increased levels of OPG, RANKL, TNF-a, and MMP-3 and cathepsin K activities in RA patients suggest that these biomarkers play an important role in the disease process of RA. Therefore, we believe these parameters may be beneficial for clarification of the etiology, early diagnosis, and effective treatment of RA in the future. However, further studies are required to verify the presence of these parameters in patients with early RA, and their value as a prognostic factor for bone destruction in RA.