Ultrasonographic Measurement of Cartilage Thickness in Patients With Leprosy

Objectives: This study aims to evaluate femoral cartilage thickness in leprosy patients by using ultrasound.
Patients and methods: Twenty-one patients previously diagnosed with leprosy (11 males and 10 females), and age, sex and body mass index matched 21 controls were enrolled. Control subjects with a history of any other systemic inflammatory disease and/or knee trauma were excluded. All femoral cartilage evaluations were performed by the same physician who was experienced in musculoskeletal ultrasonography using a linear array probe. Measurements for 42 knees of 21 leprosy patients, and 42 knees of 21 healthy subjects were analyzed.
Results: Although patients with leprosy had lower femoral cartilage values than those in the control group, the difference was not statistically significant.
Conclusion: We assume that the non-significantly decreased femoral cartilage thickness in patients with leprosy may be explained by the relative immobilization and biomechanical changes arising from complications.

Leprosy is a chronic infectious disease caused by Mycobacterium leprae.(1) While the disease primarily affects the skin and/or peripheral nerves,(1) patients may also present with musculoskeletal symptoms such as arthritis, tenosynovitis, enthesitis, pain, weakness, and muscular atrophy involving particularly hands and feet.(2-4) Dermatologists focusing on leprosy should bear in mind that some form of joint involvement may occur in the majority of patients.(5)

Ultrasonography (US), which is increasingly being used as a diagnostic aid in many disorders, has been shown to be a reliable tool for evaluating femoral cartilage.(6,7) The aim of the current study was to evaluate the femoral cartilage thickness in leprosy patients by using US.

The study was conducted on out- and inpatients followed at the ‹stanbul Leprosy Hospital. Ethical approval was obtained from the local ethics committee. All patients were informed about the study protocol and gave a written informed consent.

Twenty-one patients previously diagnosed with leprosy (11 males and 10 females), and 21 healthy controls (11 males and 10 females) were enrolled. Demographic and clinical features were recorded. Control patients with a history of any other systemic inflammatory diseases such as rheumatoid arthritis, ankylosing spondylitis, spondyloarthritis, systemic lupus erythematosus, gout, and/or knee trauma were excluded.

All femoral cartilage evaluations were performed by the same physician who was experienced in musculoskeletal US using a linear array probe (7-12 MHz, Sonosite M-Turbo 2007-2011, USA). Patients were assessed in supine position with their knees in maximum flexion, and the probe was placed in an axial plane on the suprapatellar area. The femoral cartilage was visualized as a strongly anechoic structure between the bony cortex and the suprapatellar fat. Three mid-point measurements were taken from each knee, at the right lateral condyle (RLC), the right intercondylar area (RIA), the right medial condyle (RMC), the left medial condyle (LMC), the left intercondylar area (LIA), and the left lateral condyle (LLC) (Figure 1). 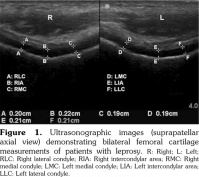 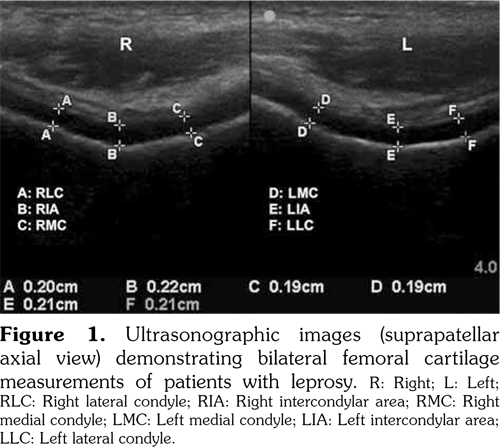 Overall, 42 knees of 21 leprosy patients, and 42 knees of 21 healthy subjects were assessed. Three patients had plantar foot ulcers, three had Charcot foot, six had minor lower limb amputations, two had Lisfrank amputation and four had major lower limb amputation. Groups were similar with regards to age, sex, height, weight and body mass index (BMI) (all p>0.05) (Table 1). Mean femoral cartilage thickness values are given in Table 2. Although we observed that patients with leprosy had thinner femoral cartilage values than those in the control group at all measurement sites, the differences did not reach statistical significance (all p>0.05). In addition, correlation analysis between clinical characteristics including age, BMI and disease duration, and cartilage thickness did not reveal significant results (all p>0.05).

Table 1. Demographic features of the groups
×

Our results have demonstrated no significant difference in femoral cartilage thickness between patients with leprosy and healthy controls.

Patients with leprosy may present with musculoskeletal symptoms prior to any cutaneous or neurological involvement. While these symptoms may occur at the onset of the disease,(8) rheumatological manifestations such as softtissue inflammations, arthritis, bone resorption, osteomyelitis, and neuro-osteoarthropathy are usually observed during the reactive inflammatory phase.(4,9,10)

Peripheral neuropathy associated with motor, sensory, and autonomic function disorders in patients with leprosy has several implications; e.g. contractures of the fingers, muscle weakness, Charcot foot,(11-13) and ulcers leading to minor or major lower limb amputations, all of which may limit mobilization. Patients enrolled in the current study had disorders affecting, in part, their posture and mobilization. Reports on the influence of immobilization on the articular cartilage thickness are controversial.(14) While some reports claimed reduced thickness, some others have reported either increased or unchanged thickness.(15) Healthy distribution of contact stresses in the knee joint is maintained through an intact articular cartilage which in turn depends on a dynamic mechanical loading as well as intermittent hydrostatic pressure.(16) Overall, we consider that the non-significant decrease in the femoral cartilage thickness observed in patients with leprosy may, in part, be explained by the relative immobilization and biomechanical changes arising from leprosy related complications.

On the other hand, this study has several limitations. First, previous reports outlined the influence of hormones (i.e. calcium, vitamin D, estrogen, thyroid hormones) and corticosteroids on the thickness of the cartilage. We did not evaluate these parameters. Second, we did not record the exercise status/mobilization of leprosy patients.

Further researches on the use of US in patients with leprosy, and integrated histological and functional examinations are necessary to demonstrate and thoroughly define the implications of cartilage thickness in this specific group of patients.