Comparison of the Short-Term Effectiveness of Short-Wave Diathermy Treatment in Patients With Carpal Tunnel Syndrome: A Randomized Controlled Trial

Carpal tunnel syndrome (CTS) is one of the most common entrapment neuropathies caused by compression of the median nerve within the carpal tunnel in the wrist.(1) The diagnosis is based on medical history, clinical and physical examination findings, as well as electrophysiological confirmation. Available conservative treatments include wrist-resting splints, local steroid injections, non-steroidal antiinflammatory drugs (NSAIDs), physical therapy, diuretics, vitamin B6, and activity modification. However, the efficacy of these treatments remains controversial.(2,3)

Short-wave diathermy (SWD) is a form of electromagnetic therapy used at a frequency of 27.12 MHz in continuous or pulsed forms. Molecular distortion occurs due to the movement of ions in the electromagnetic field, and heat is generated in the deep tissues with induced eddy currents.(4) In addition to the effects of SWD on the tissues, healing is stimulated with increased vascular circulation and pain threshold, and decreased pain and chronic inflammation.(5) It is thought that these effects cannot be explained solely by the heating effect, and some of the therapeutic effects of SWD treatment are dependent on the mutual interaction of electrical/magnetic fields and their interactions with biological tissues.(6,7) Although pulsed SWD (minimal or no heating effect) has shown favorable effects such as increased tissue healing, hematoma resorption, nerve regeneration and collagen deposition, and reduced inflammation and swelling,(4,8-10) its efficacy remains controversial due to the limited number of relevant studies.(7,11)

The aim of the current study was to evaluate the differences between pulsed SWD, continuous SWD, and placebo treatment in terms of their effects on pain, clinical findings, hand function, and electrophysiological findings in patients with CTS.

A double-blind, randomized controlled trial was designed. Patients diagnosed with mild or moderate idiopathic CTS by electrophysiological examination based on reference values used in our laboratory [median motor distal latency (mMDL) >4.2 m/sec or reduced sensory nerve conduction velocity (NCV) of the palm-wrist segment <46 m/sec] were included. Patients with comorbid diseases which may affect peripheral nerves, splint use, a history of CTS surgery, forearm fracture, steroid injection into the carpal tunnel within the previous three months, polyneuropathy on electrophysiological examination, and severe CTS [mMDL of >6 m/sec, the absence of a median nerve compound muscle action potential (CMAP), or the presence of thenar atrophy] were excluded. The institutional ethics committee approved the study protocol, and all subjects provided written informed consent. Patients were randomized into three groups using a closed-envelope method. Both hands of the patients with bilateral CTS were included in the same group, although the hands were evaluated separately.

A detailed neurological examination and tests for CTS including the Tinel's test, Phalen's and reverse Phalen's maneuvers, and carpal compression tests were performed. Visual analog scale (VAS) was used to assess the severity of hand and finger pain on a 10 cm scale. A Turkish version of the Boston Carpal Tunnel Questionnaire (BCTQ) was used to identify symptom severity and functional status of CTS patients.(12,13) The questionnaire consists of two parts: symptom severity scale (BCTQ-SSS) and functional status scale (BCTQ-FSS).

Nerve conduction studies were performed by using an electromyography device (Model 9200 K, Nihon Kohden, Tokyo, Japan) with superficial recording and stimulation electrodes. Median sensory nerve conductions were recorded from the second finger using the anti-dromic method. Compound muscle action potential was obtained from the abductor pollicis brevis muscle by supramaximal stimulation of the median nerve at the wrist level. Distal latencies and NCV were also recorded. Clinical and electrophysiological assessments were performed twice (before treatment and immediately after treatment) by blinded investigators.

Group 1 was applied continuous SWD and splints, group 2 was applied pulsed SWD, and group 3 was applied placebo SWD treatments. Treatment with a Curapulse 970 SWD device (Enraf-Nonius, Rotterdam, The Netherlands) was administered by the same physiotherapist for 15 sessions, 20 min per day, five days/week, for three weeks. During the administration, capacitor electrodes with a diameter of 10 cm were used. The electrodes were placed parallel to the wrist, facing the carpal tunnel region, while the elbow was flexed 90° and the wrist was in the neutral position with a distance of 2 cm to the volar surface, and 3 cm to the dorsal surface. In continuous administration, an intensity of position 4 was used. In intermittent administrations; a pulse duration of 400 μs, a pulse frequency of 82 Hz, and an intensity of position 6 were used. Starting from one week before the study and throughout the study, patients were asked to refrain from using NSAIDs or analgesic medications. All patients were stabilized with a neutral (0-5° extended) custom-molded thermoplastic volar wrist splint at night during the treatment period.(14)

Statistical analyses were carried out by using the SPSS for Windows version 15.0 software program (SPSS Inc., Chicago, IL, USA). Chisquared test was used to compare categorical data between the groups, and the McNemar’s test was used to compare categorical data within the groups. Wilcoxon signed-rank test was used to identify significant differences between the pre- and post-treatment results within the groups. A Kruskal Wallis variance analysis was used, and post hoc comparisons were performed with Mann Whitney U test. All demographic and quantitative data are expressed in mean ± standard deviation (SD). A p value of <0.05 was considered statistically significant.

Power calculations based on a pilot study with the first 10 wrists to detect a significant difference in the BCTQ-SSS revealed scores of 37±7 in group 1, 32±7 in group 2, and 30±5 in group 3, respectively. Based on these differences and the assumption of a two-tailed alpha-value of 0.05 (sensitivity 95%) and a beta-value of 0.20 (study power: 80%), we showed that at least 16 wrists were required in each group (G*Power 3 power analysis software: University of Düsseldorf, Germany).(15)

Flow diagram of the study is given in Figure 1. The baseline characteristics including age, gender, body mass index, VAS, BCTQ-SSS, BCTQFSS, mMDL, median sensory nerve conduction velocity (mSNCV), median sensory distal latency (mSDL), and positivity of the provocation tests for CTS were similar between the groups (all p>0.05) (Table 1). 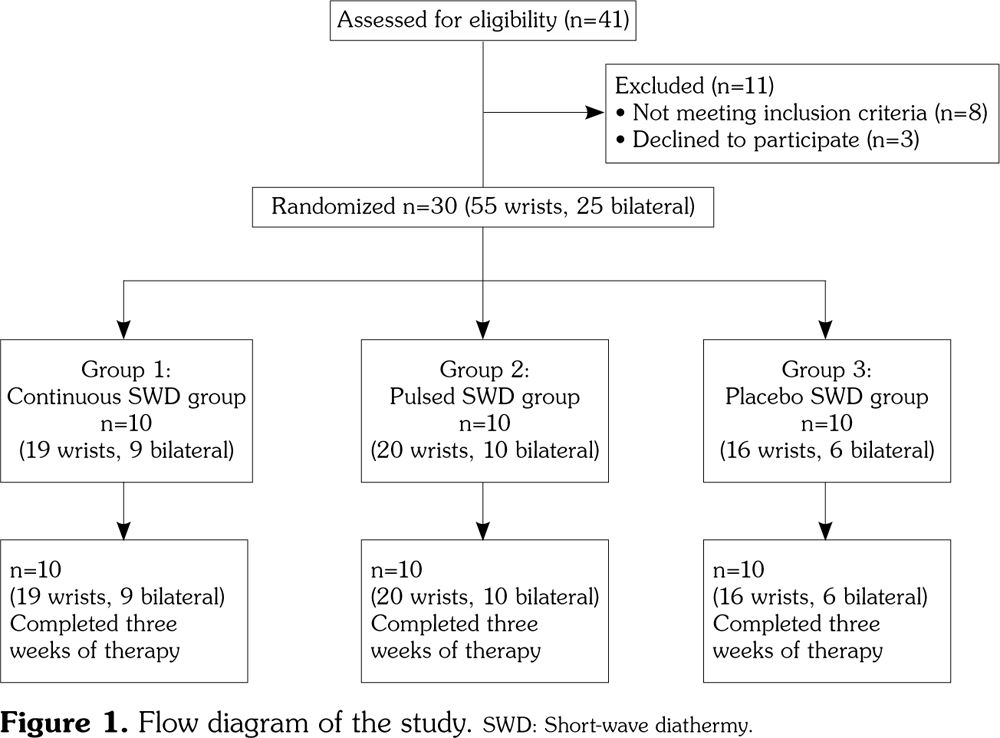 Table 1. Baseline characteristics of the study population, and comparison of pre- and post-treatment parameters and treatment effectiveness of the groups
× 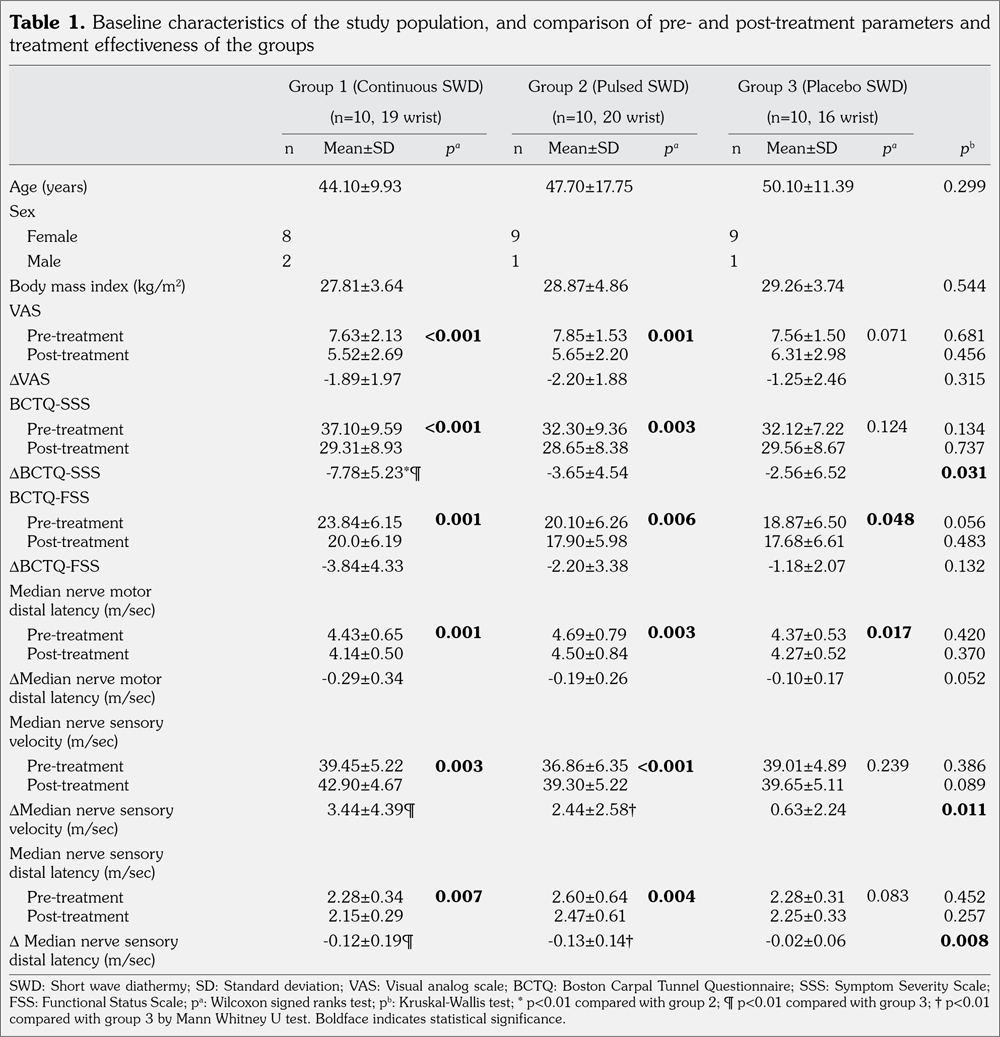 When the groups were compared according to the delta (Δ) values of pre- and posttreatment parameters, differences were observed in BCTQ-SSS, mSNCV, and mSDL values (all p<0.05). The BCTQ-SSS scores were higher in the continuous SWD group than the other groups at the end of the treatment (p<0.01). Significantly improved mSNCV and mSDL parameters in both SWD groups were observed compared to the placebo group (both p<0.01) (Table 1).

The absence of significant differences between the groups in terms of pain, function, or mMDL after treatment was attributed primarily to the use of the splint treatment in the placebo group.(2) Moreover, placebo analgesia induced in the placebo group might have contributed to this result.(16) In a previous study investigating the effectiveness of continuous and pulsed SWD treatments in mild or moderate CTS, it was shown that these treatments were effective on subjective clinical parameters, however, the efficacy was not superior to that of the placebo. Moreover, improved mSNCV following treatment in the continuous SWD group was demonstrated.(17) In the current study, improved mSNCV in both SWD treatment groups was shown. This significantly increased sensory NCV in the continuous SWD groups in both studies may be explained by the thermal effects of continuous SWD on the peripheral nerves. The longer duration of treatment and the application of a splint in the present study, as opposed to the nerve gliding exercises in the previous study, may also explain the electrophysiological improvement in the pulsed SWD treatment group. To the best of our knowledge, no study has been published on the effectiveness of SWD on NCV other than this study.(17) However, some studies have demonstrated the efficacy of ultrasound therapy on NCV in mild-to-moderate CTS.(18,19) Additionally, corticosteroid phonophoresis, steroids, and procaine hydrochloride injection treatments in patients with CTS have improved electrophysiological parameters.(20,21) Improved electrophysiological parameters with pulsed SWD treatment reported herein suggest that this treatment might also have thermal effects. Pulsed SWD can increase tissue temperature, depending on the dose administered.(22,23) Further studies are needed to establish the appropriate dose and duration.

Limitations of the current study include its small sample size, lack of long-term follow-up, and the fact that evaluations were performed only at the end of the treatment. Also, the use of splint treatment in all groups made it difficult to explain the effects of treatment with only continuous or pulsed SWD.