Methotrexate (MTX) is the most commonly used drug in the treatment of rheumatoid arthritis (RA). In MTXtreated RA patients, the prevalence of pancytopenia is nearly 3%. Several medications may be prescribed for RA patients with an additional systemic disease. This may result in bone marrow toxicity, making it difficult to know which drug induced the pancytopenic condition. Therefore, identifying the culprit agent through bone marrow aspiration and biopsy findings of the samples is critical for determining the best course of treatment for pancytopenia. Significantly increased amounts of eosinophilia in the bone marrow indicate that MTX is the culprit for the presentation of pancytopenia.

In rheumatoid arthritis (RA) patients who are treated with methotrexate (MTX), the prevalence of hematological toxicity, including thrombocytopenia, leucopenia, and pancytopenia, is estimated to be 3%.[1] Pancytopenia is a rare but potentially fatal complication of low-dose oral MTX treatment; however, the frequency of this complication may increase with concomitant medication, low folate levels, hypoalbuminemia, concomitant infections, old age, dehydration, renal dysfunction, daily MTX, and high mean corpuscular volume (MCV) values.[2,3]

Many drugs used for the treatment of RA, regardless of the dosage or whether the patients are dose-dependent, can cause multiple side effects. Some of these resolve spontaneously with the discontinuation of the agent, but some lead to permanent damage. Methotrexate and non-steroidal anti-inflammatory drugs (NSAIDs), which are used in the treatment of RA, can cause various side effects such as gastrointestinal complications, hepatotoxicity, renal failure, thrombocytopenia, pancytopenia, or leucopenia.[4,5] Patients with RA that also have cerebral or cardiac problems use antiplatelet agents, for example acetylsalicylic acid, ticlopidine, or clopidogrel, in addition to MTX. If pancytopenia develops in patients who have RA in conjunction with another systemic disease which requires them to take several medications that can cause bone marrow toxicity, it can be difficult to know which drugs induced the pancytopenic condition. Therefore, in patients who have to use drugs such as clopidogrel for ischemic conditions in combination with an appropriate choice of diseasemodifying anti-rheumatic drugs (DMARDs), it is much more important to identify the culpable agent that triggered the pancytopenia in order make a knowledgeable decision about whether or not to continue the treatment.

In this article, we present a patient with cerebrovascular disease and RA who developed pancytopenia that was taking MTX, diclofenac, and clopidogrel. When a bone marrow biopsy was performed, significant eosinophilia was revealed.

A 71-year-old female patient who had suffered from seropositive RA for 35 years was admitted to our health center with complaints of diarrhea, weakness, mouth sores, and dysphagia. She had a temperature of 37.8 °C and a pulse rate of 90 beats per minute, and her blood pressure was 120/80 mmHg. A physical examination revealed dehydration with oral mucositis and ulcers, but no signs of active synovitis were observed (DAS 28 score of 3.19). A laboratory examination showed the following: an erythrocyte sedimentation rate (ESR) of 77 mm/h, hemoglobin (Hb) of 7.18 gr/dl (normal range 12-16), mean corpuscular volume (MCV) of 100 fL (normal range 81-99), a white blood cell (WBC) count of 0.572x103/ul (normal range 4-10), an absolute neutrophil count (ANC) of 0.016x103/ul (normal range 2-6.9), an absolute lymphocyte count (ALC) of 0.299x103/ul (normal range 0.6-3.4), an absolute monocyte count (AMC) of 0.174x103/ul (normal range 0-0.9), an absolute eosinophil count (AEC) of 0.01x103/ ul (normal range 0-0.9), and a platelet count of 8.885x103/ul (normal range 150-450. In addition, the examination revealed an aspartate aminotransferase (AST) level of 35 U/L, an alanine aminotransferase (ALT) level of 30 U/L, a creatinine level of 1.1 mg/dl, a creatinine clearance of <50 ml/min, an albumin level of 3.1 mg/dl, a C-reactive protein (CRP) level of 221 mg/dl, and a folic acid level of 5.1 ng/ml (5-16). After obtaining these results, the patient consulted with the hematology department because of her pancytopenic condition. Her medical history was unremarkable except for the cerebrovascular disease. The patient had been followed up by the Department of Physical Medicine and Rehabilitation for RA and had been receiving 2.5 mg/day of MTX three days a week (7.5 mg/week), 100 mg/day of NSAIDs, such as diclofenac, and 75 mg/day of clopidogrel for her cerebral ischemia over the previous five-year period. The MTX dose was then increased to 10 mg/week (2.5 mg/day, four days a week). The patient had been taking this amount for one month. She was hospitalized for pancytopenia by the hematology clinic, and the MTX, NSAIDs, and clopidogrel were discontinued. The patient was given erythrocyte and platelet transfusion, and was started on systemic fluconazole for oral candidiasis and a combination of piperacillin/tazobactam for a urinary tract infection (UTI). To identify the etiology of the pancytopenia, several laboratory examinations and bone marrow aspiration were conducted. The patient's thyroid hormones, antinuclear antibodies (ANA), antidouble- stranded deoxyribonucleic acid (anti-dsDNA), immunoglobulin G (IgG), IgA, IgM, vitamin B12, and folic acid levels were normal, but she tested negative for hepatitis markers, brucellosis, and salmonella. Abdominal ultrasonography (USG) revealed normal findings, with no hepatomegaly, splenomegaly, or lymphadenopathy. The bone marrow aspiration showed hypocellularity and significantly increased eosinophilic precursors. In the bone marrow biopsy, 30% cellularity, a small number of micromegakaryocytes, decreased erythroid and myeloid series elements, significantly increased eosinophilic precursors, and hypocellularity were observed, but there was no increase in the blastic series (Figure 1). Folic acid and granulocyte colony-stimulating factor (G-CSF) were then prescribed. A laboratory examination three days after treatment with the G-CSF showed Hb of 10.3 g/dl, WBC of 6.52x103/ul, ANC of 3.92x103/ul, AEC of 0.012x103/ul, and platelet levels of 20.1x103/ul. Furthermore, complete blood count results five days after the discontinuation of MTX revealed Hb of 10.2 gr/dl, WBC of 23.7x103/ul, ANC of 16.7x103/ul, AEC of 1.07x103/ul, and a platelet count of 20.8x103/ul (Figure 2). Twenty days after the discontinuation of MTX, the blood abnormalities resolved completely. 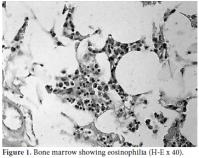 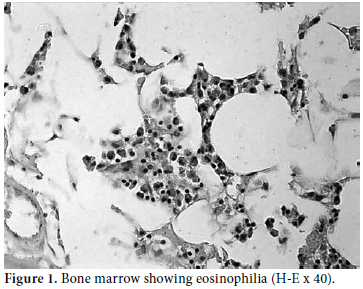 The pathogenesis of MTX-induced pancytopenia is not fully understood. It can occur early, independent of the drug dose and route of administration. This possibly reflects an idiosyncratic reaction. However, more commonly it occurs late, suggesting a cumulative effect.[6] The cumulative MTX dosage of our patient was 3037 mg over the five-year period before pancytopenia developed, but the daily dosage had increased to 2.5 mg/day four days a week in the last month. Some RA patients who took MTX had potential risk factors for developing pancytopenia,[2,3] and our patient was found to have the risk factors for MTX toxicity, such as concomitant medication, daily MTX usage, hypoalbuminemia, old age, renal dysfunction, concomitant infection, dehydration, and a high MCV.

Eosinophilia is frequently observed in a subgroup of patients with RA who exhibit extraarticular disease manifestations like subcutaneous nodules, vasculitis, pleural/pericardial involvement, or pulmonary fibrosis.[7] In addition, eosinophilia has been observed as a side effect of MTX in patients with chronic arthritis and may or may not be accompanied by pancytopenia.[8] Our patient had no extraarticular disease manifestations and was not using any other antirheumatoid medication.

Eosinophilia in the bone marrow may be seen with some dermatological or autoimmune diseases, but in these cases, the erythroid, myeloid and megakaryocytic series of bone marrow remain normal and are available in normocellular or hypercellular forms. Increases in the eosinophils of the bone marrow in pancytopenia patients due to the drugs they must take causes a decrease in hematopoiesis in the erythroid, myeloid and megakaryocytic series and the hypocellular bone marrow. In addition, reactive lymphocytes, plasma mast cells, and macrophages along with increased iron storage can be seen.[4]

The most common side effects of NSAIDs are gastritis, peptic ulcer disease (PUD), and renal dysfunction. The side effects of the NSAID diclofenac are similar except that the blood values associated with it are much lower.[5] In the literature, there have also been a few case reports of aplastic anemia due to the use of diclofenac.[9,10]

Clopidogrel, an antiplatelet agent is currently being used in patients with cerebrovascular diseases, cardiac ischemia, and peripheral vascular disease. However, hematological side effects can be seen with this drug, for example thrombotic/thrombocytopenic purpura, neutropenia, acquired hemophilia, and isolated thrombocytopenia. Rare instances of aplastic anemia have also been reported as a side effect of clopidogrel.[11] In addition, in patients who developed pancytopenia or aplastic anemia due to this drug, bone marrow biopsies have shown hypocellularity, but no other important findings.[12]

Table 1. Clinical findings of rheumatoid arthritis patients with pancytopenia due to methotrexate
× 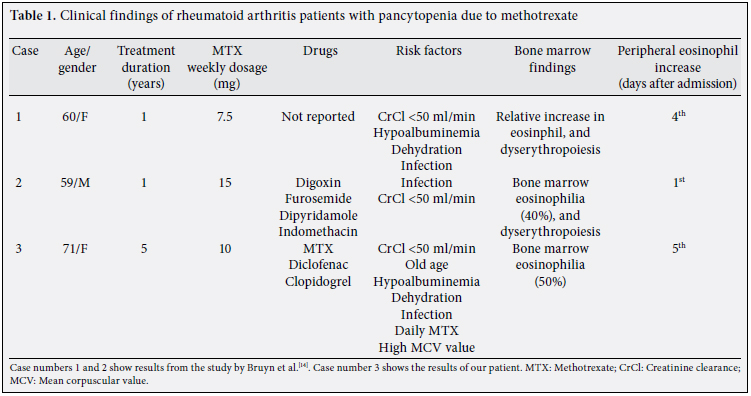 In conclusion, when pancytopenia occurs in patients with RA who are using several prescription drugs for their treatment regimen, bone marrow aspiration and biopsy findings can be used diagnostically to identify the causative agent. In particular, significantly increased amounts of eosinophilia in the bone marrow seems to point to MTX as a cause of pancytopenia.