In this article, we present a rare case of tuberculous tenosynovitis of the wrist flexor tendons. This condition should be considered in the differential diagnosis of chronic tenosynovitis and mass lesions of the wrist and the patient should receive extensive debridement and chemotherapy.

A 48-year-old male was treated at another health center for a year due to painless swelling over the volar region of the left wrist. He also had paresthesia and numbness in the median nerve distribution of the hand and forearm before coming to our clinic. There were no constitutional symptoms or past history of major illness, but he was known to be an alcoholic. Surgery had been performed twice by the primary physician at the other clinic based on a misdiagnosis of a volar wrist ganglion. A physical examination revealed non-tender, fluctuant swelling over the volar aspect of the left wrist. The overlying skin appeared normal, and there was limited flexion of the wrist joint. The swelling extended through the carpal tunnel and ended at the mid-palm. Plain radiographs of the wrist and chest were normal, and laboratory findings, which included the erythrocyte sedimentation rate (ESR), were within normal limits. Magnetic resonance imaging (MRI) of the left wrist revealed tenosynovitis of the flexor digitorum superficialis and profundus. It was decided that surgical intervention via a synoviectomy was the best course of action because of the swelling around the tendon sheaths. A classic, lengthened carpal tunnel incision was performed which allowed for the decompression of all of the affected tendon sheaths (Figure 1). At the beginning of the operation, a swollen capsular mass was detected on the proximal edge of the wound that mimicked volar wrist ganglia. The capsule was opened, the cold abscess-like fluid drained, and rice bodies were detected. The swollen capsular mass was suspected to be a part of tuberculous tenosynovitis (Figures 2 and 3). Afterwards, a complete tenosynovectomy with extensive debridement of the surrounding granulation tissue and carpal tunnel decompression was performed (Figure 3), and the wound was then primarily closed. Mycobacterium tuberculosis was isolated on a culture, and a histopathological examination revealed caseous necrosis with granuloma formation (Figure 4). The patient received anti-TB chemotherapy for nine months, which included ethambutol, pyrazinamide, rifampicin, and isoniazid for the first three months and only isoniazid and rifampicin for the next six months. Follow-up examinations were conducted at two month intervals, and at two years postoperatively, the patient was found to be symptom free, with full range of motion in the wrist joint. No recurrence was detected. 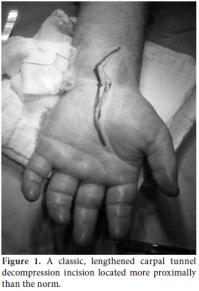 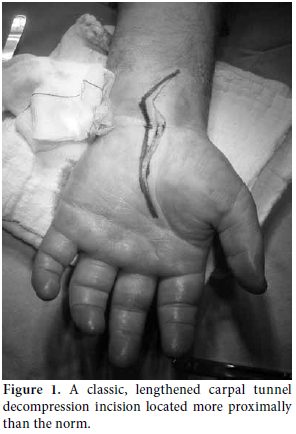 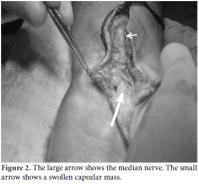 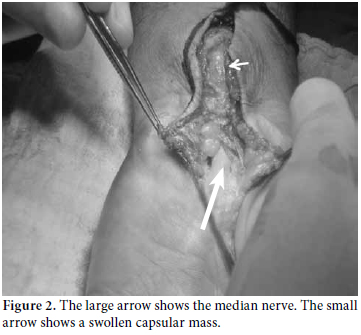 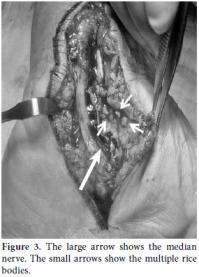 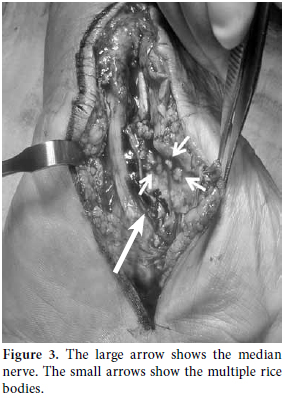 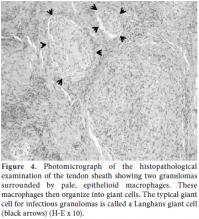 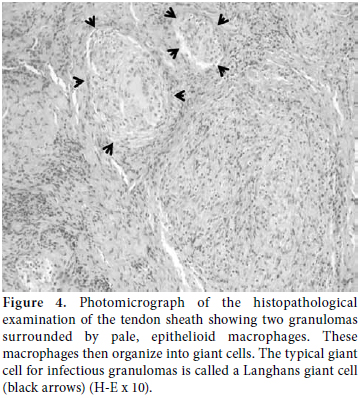 In the literature, there have been some studies that have focused on tuberculous upper extremity involvement In addition, there have also been reports on arthritis of the thumb, arthritis of the finger, midpalmar abscess, wrist osteoarthritis, tenosynovitis, metacarpophalangeal and interphalangeal osteoarthritis, and metacarpal and phalangeal osteitis published in recent literature,[8,9] but none of these examples mimicked a volar wrist ganglion and carpal tunnel decompression at the same time.

Diagnosis of tuberculous tenosynovitis of the wrist is usually delayed because the disease has slow progression and occult symptoms[10] and is often misdiagnosed as a tumor or noninfectious tenosynovitis.[11]

The case presented here was originally misdiagnosed as a volar wrist ganglion at another clinic. These are located either directly over the distal edge of the radius or slightly more distally over the scaphoid tubercle. This case presented as a volar wrist ganglion, but it was located at the center of the wrist and extended to the midpalm through the carpal canal. Volar wrist ganglia are well bordered, but in this case, the lesion was diffuse and surrounded the tendon sheaths. Inflammatory causes of tenosynovitis other than TB usually show elevated levels of ESR and C-reactive protein (CRP). The joints are often involved, and sometimes there is skin, eye or renal involvement as well. Well-documented anamnesis along with a physical examination and detailed blood tests can help the physician to distinguish other causes of inflammatory tenosynovitis from tuberculous tenosynovitis.

To make the correct diagnosis, physicians must also be aware of any patient addictions such as drugs or alcohol. Animal studies of pulmonary TB have shown decreased lung CD4 and CD8 T cells and diminished proliferation in ethanol-fed mice compared with a control group.[12] In another study, ethanol also significantly decreased the granulomatous response. This was possibly caused by impaired interferongamma (IFN-γ) secretion of T cells that were isolated from the lungs and the mediastinal lymph nodes of the alcohol-consuming mice.[13]

Based on the aforementioned data, alcohol appears to have a significant inhibitory effect on cell-mediated immunity, the primary host defense against TB. In our case, the patient had an alcohol addiction, making him prone to tuberculous infection.

Two main views are common in the literature regarding the so-called rice bodies that are associated with TB. Some studies have indicated that they can be found around the tendon sheaths, but this is a rare occurrence related to rheumatoid arthritis (RA)[14] in which they can be seen within the joints or bursae. In addition, rice bodies can also be observed in cases of systemic lupus erythematosus (SLE), seronegative arthritis, infectious arthritis (TB, atypical mycobacterial infection) nonspecific arthritis, and osteoarthritis (OA).[14-19] However, Woon et al.[20] reported that finding rice bodies along with millet seed or melon seed-shaped lesions is highly suggestive of tuberculous tenosynovitis. They also suggested that the surgeon has to be aware of the significance of loose bodies when performing a routine excision of innocuous looking wrist ganglia.

In this case, the significance of rice bodies had been overlooked in the previous diagnosis. In addition, histopathological and microbiological examination findings were absent for the operations that were previously performed by the patient's primary physician.

Tuberculosis is still a major health threat. Orthopedic specialists must be aware of tuberculous synovitis, even if a patient presents with an innocuous mass lesion at the wrist. Furthermore, tuberculous tenosynovitis should be considered in the differential diagnosis of chronic tenosynovitis of the wrist, especially in countries where TB is prevalent. Patients with this disease should be treated with extensive debridement and chemotherapy, and close follow-up is necessary to avoid possible complications and recurrence.