Although tumor necrosis factor-alpha (TNF-α) antagonists are shown to be effective in the treatment of psoriasis, induction of psoriatic skin lesions have been seen in patients with different rheumatic conditions who were treated with TNF-α antagonists. In this case series, we report four cases that developed psoriatic lesions; in one of the cases, psoriasis was associated with two different TNF-α antagonists.

Case 1: A 31-year-old man with ankylosing spondylitis developed erythematous and squamous lesions on his extremities in the 2nd week of infliximab treatment. Two months later he began to receive etanercept, and psoriatic skin lesions developed on the entire trunk and extremities, and predominantly on the scalp after one month. Case 2: A 53-year-old female with rheumatoid arthritis developed psoriatic skin lesions in the ankle region after two months' treatment with etanercept. Case 3: A 34-year-old female with ankylosing spondylitis developed psoriatic lesions on her palms after 10 months' treatment with infliximab. Case 4: A 40-year-old female with ankylosing spondylitis developed pustular lesions on her palms and soles after two years' treatment with infliximab. The patients had no personal or family history of psoriasis. The diagnosis of psoriasis was confirmed by skin biopsy in three of the cases.

Psoriatic skin lesions can be induced as a result of treatment with TNF-α antagonists in patients with rheumatoid arthritis, ankylosing spondylitis and other spondyloarthropathies. The most common form is plaque or pustular pattern with palmoplantar distribution. (Turk J Rheumatol 2010; 25: 91-4)

Tumor necrosis factor-α (TNF-α) is a cytokine that plays an important role in the pathogenesis of autoimmune inflammatory diseases. Inhibition of TNF-a ensures significant recovery in disease activity in immune-mediated inflammations like rheumatoid arthritis (RA), ankylosing spondylitis (AS), Crohn disease and psoriatic arthritis (PsA). TNF-α inhibitors include infliximab and adalimumab, which are among monoclonal antibodies, and etanercept in receptor form. These agents are seen as relatively reliable but are associated with increase in infection and malignancy risk and may cause various skin lesions. Skin reactions stated to be associated with use of TNF-a inhibitors include erythema and edema at the site of injection, eczema, non-specific eruptions, erythema multiforme, bullous lesions, vasculitis, cutaneous lupus erythematosus, and skin malignancies [1,4].

TNF-α cytokine, which plays a role in the pathogenesis of immune inflammatory diseases, is also considered to have a key role in the pathophysiology of psoriasis [5]. Both etanercept, which is a recombinant soluble human TNF receptor protein, and infliximab, which is a chimeric anti-TNF-α monoclonal antibody, have been used in psoriasis and PsA treatment successfully [4,6]. Although they are used in psoriasis treatment, psoriasis cases have been reported in the last few years as developing due to the use of TNF-α inhibitors in RA, AS and other spondyloarthritides [3,5]. These agents are reported to induce psoriasis or to worsen psoriatic skin lesions. Inducement of psoriasis may be seen as an acceptable side effect due to the benefits gained from anti-TNF-α treatment in patients with spondyloarthropathies [7,8].

In the literature, psoriatic lesions that develop following use of TNF-α inhibitors was reported in two female patients with RA, one of whom used infliximab and the other etanercept, with development of lesions in the first three months of treatment [6]. Psoriasis diagnosis in these patients was also verified histopathologically. Similar cases were reported later in the literature. Palmoplantar distribution, pustulous form and plaque type psoriasis are the cutaneous reactions most frequently occurring in connection with TNF-α blockers [3,7,9,10].

In this case series, we present four cases with diagnosis of AS or RA who developed psoriasis caused by the use of TNF-α inhibitor. One of the cases had psoriatic skin lesions following use of two different TNF-a inhibitors.

Case 1: Infliximab treatment was started in this male patient at the age of 31 in October 2006, upon severe disease activity (Bath AS Disease Activity Index, BASDAI=9.28). He had been followed with AS diagnosis for three years. Erythematous squamous lesions were seen on both upper and lower limbs in the 2nd week of treatment. A decrease in lesions was observed at the end of treatment. However, since the disease progressed very actively, etanercept treatment was started two months later. Upon development of common psoriatic lesions on the entire body and limbs, becoming intensive on the scalp in the 1st month of treatment (Figure 1), the patient was consulted to the Dermatology Clinic. Skin biopsy was performed and was reported as consistent with psoriasis. On the recommendation of the Dermatology Clinic, the treatment was ceased and clear recovery of the lesions was observed. 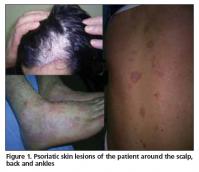 Figure 1. Psoriatic skin lesions of the patient around the scalp, back and ankles
× 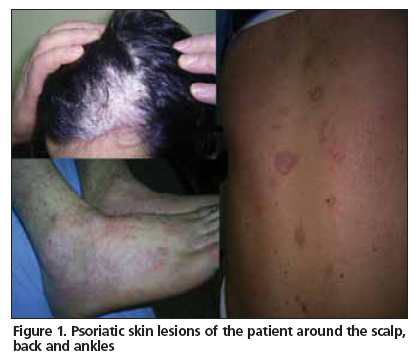 Case 2: This female patient, aged 53 years, had a 31-year history of RA. Etanercept treatment was started in January 2007 in addition to methotrexate upon failure in fully controlling disease activity with other disease-modifying anti-rheumatic drugs (DMARDs). Erythematous squamous lesions were observed around both ankles in the 2nd month of treatment. Skin biopsy was reported as psoriasiform dermatitis. Although treatment cessation was not recommended, the patient did not want to continue. The lesions recovered fully after treatment was stopped. 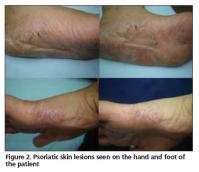 Figure 2. Psoriatic skin lesions seen on the hand and foot of the patient
× 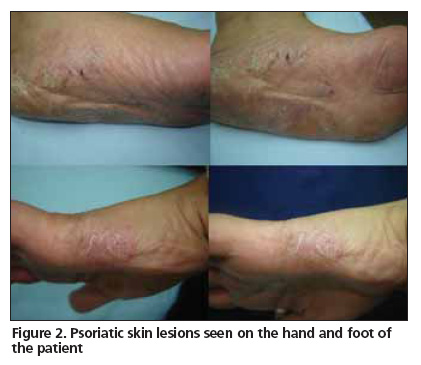 In three of the patients, diagnosis of psoriasis was verified histopathologically. One patient did not consent to biopsy. The third and fourth cases were sisters, and four of the six siblings were being followed with a diagnosis of AS. The patients had no personal or family history of psoriasis.

Various skin reactions may occur in connection with use of TNF-α inhibitors, including erythema, non-specific eruptions, edema, bullous lesions, and vasculitis in the injection zone. It was reported that skin lesions developed in 10% of the patients receiving anti-TNF treatment, including eczema, drug eruptions, drug induced systemic lupus erythematosus, dermatomyositis, lymphamatoid papulosis-like eruptions, and psoriasis [11].

According to the literature, Dereure et al. [6] were the first to report development of psoriatic skin lesions in connection with use of infliximab and etanercept in their study in 2004 involving two patients with RA. Similar cases were published later [1,2,4,7,9,10,12,17]. Two cases were reported in Turkey, one of them a patient with RA using etanercept and the other with AS receiving infliximab treatment [18,19].

In a Medline search performed by Grinblat et al. [3], they identified 50 cases with psoriasis or psoriasiform skin lesions associated with use of TNF-α inhibitor during the period April 2005 to February 2007. The most frequently seen disease among these cases was determined as RA (56%), followed by AS (22%) and inflammatory bowel disease (14%). Plaque psoriasis was reported as the most frequently seen skin lesion, followed by pustulous form. Other involvements likely to be seen were reported as nail involvement and guttate psoriasis. Sixty-six percent of the patients were found to use infliximab, 34% etanercept and 20% adalimumab. In some cases, development of psoriasis was observed following use of more than one type of TNF-α inhibitor as well. Symptoms were seen as a late event after start of TNF-α inhibitor in general. However, since time interval varied significantly in the cases, no average time was determined for symptom onset. Lesions recovered after treatment cessation in all patients, and were constant while treatment was continuing [3].

While the reasons for the occurrence of psoriasis following anti-TNF treatment have not yet been determined, various assumptions have been suggested. One is the possibility that these patients in actuality have PsA, mistakenly diagnosed as RA or AS. It was also stated that development of cutaneous side effects might be caused by bacterial infections. Furthermore, it was suggested that psoriasis might occur in association with other medications used and that some drug eruptions like exanthematous pustulosis might imitate psoriasis [3,5].

Psoriatic skin lesions seen as side effects were associated with use of TNF-α inhibitors [7,9]. That is, development of lesions does not depend on a specific TNF-α inhibitor, but blockage of TNF-α. As in the first case in this study, observation of psoriatic lesions with multiple TNF-α inhibitors in some cases supports the class effect of TNF-α inhibitors, as stated in the literature. In addition, the fact that two of our cases with AS were siblings suggests a role of genetic predisposition in the occurrence of this side effect.

Immunologic reasons are emphasized mostly with respect to the increase in psoriasis developing paradoxically following anti-TNF treatment. This is stated to be related with the changing immunity that occurs in connection with inhibition of TNF activity in predisposed individuals. It is reported that anti-TNF treatment increases activation of autoreactive T cells under certain conditions and thus causes tissue damage via autoimmune mechanisms. As in the case of lupus-like syndromes or development of anti-nuclear antibody induced by anti-TNF, the reason may be alteration in inflammatory immune response [13,16].

In patients receiving chronic anti-TNF treatment, cytokine imbalance between TNF-α and interferon-α was suggested as having a key role in the development of psoriatic lesions [3,20]. Other important cytokines like interleukin (IL)-15, 17 and 12-23 have a role in the psoriasis pathogenesis, and chronic anti-TNF treatment may affect immunoregulator pathways of these cytokines and may cause formation of psoriasis or psoriasiform lesions [20].

In the treatment of psoriatic lesions occurring in connection with use of TNF-α inhibitors, lesions were reported to recover upon cessation of the agents. In some cases, topical treatment started for psoriasis was sufficient without stopping treatment, while in other cases, the TNF-α inhibitor was replaced [2,4,6,13,15].

In conclusion, psoriasis is induced or psoriatic skin lesions may worsen in connection with the use of TNF-α inhibitor in patients with RA, AS and other spondyloarthropathies. The most common form of psoriasis seen in connection with anti-TNF treatment is pustulous form and plaque type with palmoplantar distribution.