Tuberculosis (TB) can affect vertebras and joints bearing weight. It can resemble clinic signs, radiological and laboratory findings of rheumatoid arthritis (RA) involving peripheral joints. TB can make rheumatoid factor (RF) and anti-cyclic citrullinated peptide (CCP) positive, which are used in the diagnosis of RA arthritis. Therefore, this causes some difficulties in clinic diagnosis. Additionally, the diagnostic problems in TB arthritis can be more complicated. We aimed to attract attention to this situation by presenting a case of TB arthritis in which anti-CCP and RF are positive. (Turk J Rheumatol 2010; 25: 95-8)

Rheumatoid arthritis (RA) is characterized by chronic inflammation in the synovial membrane of the joints. Recently, specific auto-antibodies against epidermal filagrin have been described in 40%-60% of patients with RA. Anti-cyclic citrullinated peptide (anti-CCP) is one of these antibodies. Anti-CCP antibodies have been reported to be a novel and more specific diagnostic marker than rheumatoid factor (RF) in the diagnosis of RA. Antibodies that are formed against CCP primarily belong to the immunoglobulin G class and are 97% specific for RA. Anti-CCP antibodies may be detected in 79% of patients in the early stages of the disease [3,4]. Specificity rises to 98% when both RF and anti-CCP are positive. In a recent study, anti-CCP antibody positivity has been reported in 32% of patients with active pulmonary TB [5]. This may lead to diagnostic and therapeutic errors in patients with mono- and oligo-arthritis, as well as in patients with reactive arthritis secondary to mycobacteria. TB arthritis may be confused with RA due to its radiologic features, including periarticular osteopenia and marginal erosions [6].

A chronic arthritis patient with positive RF and anti-CCP is presented in this report to highlight other clinical conditions which may lead to RF and anti-CCP positivity in light of the current medical literature.

A 72-year-old male patient was admitted to our outpatient clinic with pain, swelling, and limited range of motion of the left knee, and difficulty in walking. His knee complaints had begun suddenly 1 year ago and he also had intermittent right hip joint pain. He had 1 hour of morning stiffness and his symptoms were slightly reduced by activity. He did not have any episodes of infections prior to symptom onset. He did not report fever, weight loss or sweating, and his rheumatologic history was uneventful other than his joint complaints. Despite the use of several non-steroidal anti-inflammatory drugs, there was no improvement in his knee pain, swelling, and range of motion. The anamnesis of the patient was unremarkable except he was treated for pulmonary TB 50 years ago and underwent surgery on his right hip due to trochanteric bursitis 3 years ago. On physical examination swelling and limited range of motion was observed in left knee. After activity, pain and increased temperature was also noted. His right hip joint motion was mildly painful without any limitation. Laboratory investigations revealed a white blood cell count of 6200/uL (normal range; 4800-10800/uL), hemoglobulin level of 12.8 mg/dL (normal range; 12-17 mg/dL), platelet count of 630.000/uL, erythrocyte sedimentation rate of 59 mm/h (normal range; 0-20 mm/h), blood glucose level of 110 mg/dL (normal range; 70-110 mg/dL), a C-reactive protein level of 8.99 mg/dL (normal value; <0.3 mg/dL), RF level of 63.70 IU/mL (normal value; <19 IU/mL), and anti-CCP antibody as 21.8 U/mL (normal value; 0-5 U/mL). The synovial fluid examination revealed a white blood cell count of 16.200/uL and a blood glucose level of 12 mg/dL. Marginal erosions were noted on the radiograph of the left knee (Figure 1). The anteroposterior pelvic radiograph revealed a region of ossification lateral to the right hip joint corresponding to the trochanteric bursa region. Magnetic resonance imaging (MRI) of the left knee revealed extensive hyperintense synovial thickening and erosive changes within the joint cavity, including all knee compartments and the suprapatellar bursa on T2-weighted images (Figures 2, 3). On contrast-enhanced MRI evaluation, fields of necrosis associated with infection showing peripheral enhancement were observed. Bone and joint pathologies defined in these investigations were compatible with infection. The differential diagnosis included arthritis, osteomyelitis, and especially TB, thus the Departments of Infectious Diseases, Chest Diseases, and Orthopedics were consulted. The Department of Infectious Diseases recommended that two consecutive joint aspiration samples should be screened for acid-resistant bacilli (ARB). Indeed, ARB were detected in both joint aspiration fluid samples. On lung tomography, as recommended by the Department of Chest Diseases, revealed fibrotic scars in the bilateral upper lobes, which were thought to be secondary to previous infection. Arthroscopic debridement was performed by the Department of Orthopedics and the biopsy result was compatible with a granulomatous inflammatory reaction. The patient was diagnosed with TB arthritis and treated accordingly. Clinical and laboratory improvement was noted on follow-up. 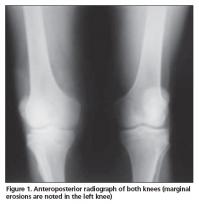 Figure 1. Anteroposterior radiograph of both knees (marginal erosions are noted in the left knee)
× 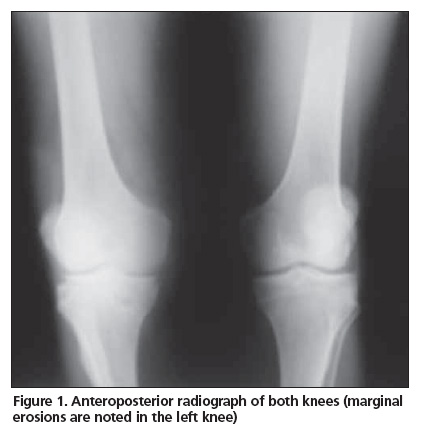 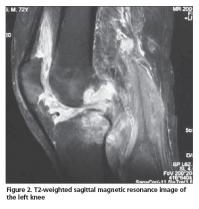 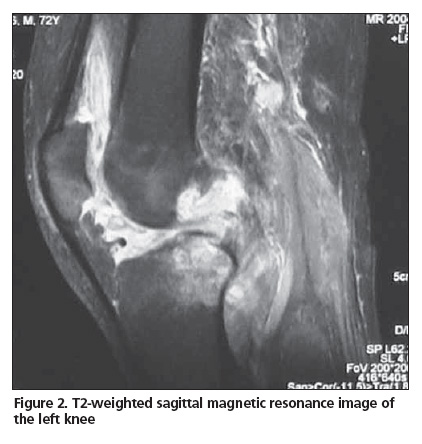 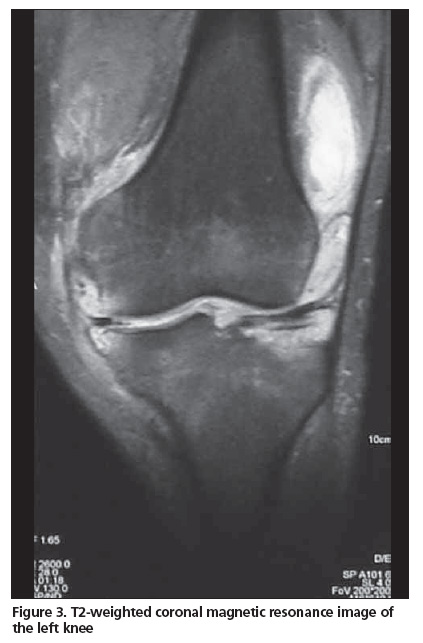 Tuberculosis is a significant health problem in developing countries. Several arthropathic forms, including TB arthritis and reactive arthritis, can be seen in patients with TB [7]. TB arthritis commonly occurs in peripheral weight-bearing joints. However, there have been several reports of small peripheral joint involvement in TB as well [8]. This may cause several diagnostic errors and clinical misunderstanding in the diagnostic and therapeutic work-up of early arthritis. In particular, mono- and oligo-arthritis caused by infections due to Mycobacterium spp. may resemble the synovitis observed in early RA [9]. Infection by Mycobacterium spp. may also lead to RF positivity. Anti-CCP antibody positivity is currently a significant diagnostic tool for the early diagnosis of RA. Anti-CCP antibodies have been shown to have a specificity of 94.9% and a positive predictive value of 87.8% in the early diagnosis of RA. When both anti-CCP antibodies and RF are positive, the specificity rises to 96.9% and the positive predictive value is 90.9% [10]. Anti-CCP antibodies and RF together seem to be a better marker for diagnosis and prognostic indicator.

Kakumanu et al. [11] reported that anti-unmodified arginine-containing peptide (anti-CAP) levels were higher in patients with active TB infections compared to RA patients. While the anti-CAP/anti-CCP ratio was >2 in 94% of patients with RA, the same ratio was observed in only 22% of patients with TB. Thus, it was concluded that the anti-CCP/anti-CAP ratio could be used for differentiating TB arthritis from RA [11].

With the exception of hepatitis C virus (HCV) infection, anti-CCP antibody positivity in other infectious diseases has not been studied. Although RF is positive in HCV infections, anti-CCP antibodies are negative. Anti-CCP appears to be a useful tool for the differentiation between HCV-associated arthritis and RA. It should be noted, however, that anti-CCP antibodies can also be positive, although at low titers, in rheumatic diseases other then RA, and in healthy individuals [13,14].

Moreover, exacerbation of TB infection can occur in patients with RA both during the disease course and also due to immunosuppressive medications used for its treatment. An increase in inflammatory markers may be misinterpreted as activation of RA and lead to alterations in disease-modifying drug choices, and even initiation of treatment by biological agents [11].

Our patient was noted to have monoarthritis on initial physical examination and laboratory assessment with increased inflammatory markers. He was diagnosed with TB arthritis following synovial fluid analysis, cultures, and biopsy, and appropriate treatment was initiated. However, diagnosis may not be as straightforward in many cases as in this case due to the challenges in identifying TB. Owing to high sensitivity and specificity for RA, the presence of RF and anti-CCP antibodies might lead to errors in the differential diagnosis. Further studies are needed to identify other conditions causing anti-CCP antibody positivity. Chronic infectious etiologies should always be kept in mind during the diagnostic work-up of patients presenting with arthritis and the anamnesis, physical examination, and laboratory findings of patient should be evaluated carefully.