Ankylosing spondylitis (AS) is a kind of progressive arthritis caused by long-term chronic inflammatory stimuli in the joints of the spine. Tumor necrosis factor-alpha (TNF-α) is widely accepted as the most important inflammatory cytokine in AS development. Convincing data from clinical trials have demonstrated dramatic benefits of tumor necrosis factor inhibitor (TNFi) in AS patients, which include reducing disease severity.(1,2)

Type-III interferons (type-III IFNs) are newly described members of the IFN family and consist of three IFN-λs molecules called interleukin (IL)-29 (IFN-λ1), IL-28A (IFN-λ2), and IL-28B (IFN-λ3). A variant upstream of the IFN-λ3 gene was recently described and named IFN-λ4 gene.(3) These IFN-λs signals induce activation of the Janus kinase-signal transducer and activator of transcript, mitogen-activated protein kinase or Akt signaling pathway through IL-28 rheumatoid arthritis (RA) and IL-10R2 receptor complexes, and exert antiviral, anti-proliferative and immunomodulatory effects.(4-6) Recently, type-III IFNs have gained much interest in rheumatology with publications focusing on systemic lupus erythematosus (SLE), systemic sclerosis (SSc) and RA.(7-9) Many animal models of autoimmunity and clinical researches showed that IL-28A and IL-28B exert the protective effect by inhibiting inflammatory cytokines production including IL-1β, IL-17, TNF-α and neutrophil migration.(10,11) IL-29 can upregulate the levels of IL-6, IL-8 and IL-10 secreted by monocytes(12) and also enhance the IL-2-dependent proliferation of CD4+CD25+Foxp3+ T cells induced by dendritic cells,(13) which indicate that IL-29 may play a crucial role in modulating immune response. Previous studies have shown that serum IL-29 levels are not different between AS patients and healthy controls (HCs,7) while, to our knowledge, levels of IL-28 isoforms expression and the relationship between serum type-III IFNs and disease activity in AS patients have never been reported.

Therefore, in this study, we aimed to determine the changes in serum levels of type-III IFNs in AS patients treated with TNF-α inhibitors and analyze the correlations between serum type-III IFN levels and disease activity.

In this retrospective study, a total of 57 patients (51 males, 6 females; mean age 29.7±7.0 years; range, 18 to 50 years) were recruited, who were diagnosed with AS and hospitalized between September 2015 and September 2017 at the Department of Rheumatology and Immunology of China-Japan Union Hospital of Jilin University in China. All patients met the 1984 modified New York criteria for AS.(14) Also, 50 age- and sex-matched HCs (45 males, 5 females; mean age 25.5±6.7 years; range, 18 to 55 years) were included. Individuals in the control group were recruited from the physical examination center and had no history of rheumatism, infectious disease or other systemic disease. AS patients with a Bath Ankylosing Spondylitis Disease Activity Index (BASDAI) ≥4(15) or Ankylosing Spondylitis Disease Activity Score (ASDAS) using C-reactive protein (CRP) [ASDAS-CRP] ≥2.1(16) were defined as active and were assessed at baseline and first, third, sixth months after treatment. These patients received TNFi treatment (TNF-α fusion protein, etanercept) for 25 mg twice weekly together with one of non-steroidal anti-inflammatory drugs including celecoxib, diclofenac, and etoricoxib. Major exclusion criteria were infections, diabetes, heart failure, renal failure, hepatitis, hepatic failure or malignant diseases and other active inflammatory diseases (e. g., RA, Crohn's disease, SLE, SSc). Patients who were receiving drugs with direct influence on immune system (e.g., disease-modifying anti- rheumatic drugs [DMARDs], glucocorticoids) were excluded. The parameters, including age, sex, disease duration, CRP, erythrocyte sedimentation rate (ESR), BASDAI score, Bath Ankylosing Spondylitis Functional Index (BASFI) score,(17) Bath Ankylosing Spondylitis Metrology Index (BASMI,18) and ASDAS-CRP were assessed through questionnaires and reviews of medical records. BASMI, BASFI and BASDAI were used to assess spinal mobility, functional status and disease activity, respectively. All scores ranging from 0 to 10 were averaged, with higher scores indicating greater severity. CRP levels (mg/L) were measured using immunoturbidimetry method (CRP Turbilatex, Reliable Medical Supply & Co, MN, USA). CRP was measured in fresh samples in order to determine ASDAS-CRP score. The Westergren method was utilized to detect ESR levels (mm/hour). The study protocol was approved by the China-Japan Union Hospital of Jilin University Ethics Committee. A written informed consent was obtained from each participant. The study was conducted in accordance with the principles of the Declaration of Helsinki.

Statistical Analysis
The normal distribution data were expressed as the mean ± standard deviation, and the non- normal distribution data were expressed as the median (interquartile range). After checking normal distribution with the Kolmogorov-Smirnov test, independent t-test and Mann-Whitney U test were used to compare the parameters between the AS patients and HCs. Paired t-tests and Wilcoxon signed rank tests were used to compare the parameters between measuring points of zero-, one-, three-, and six-month values where appropriate. The relationship between variables was evaluated using the Spearman rank correlation test for non-normal distributions and Pearson’s correlation test for normal distributions. Statistical analyses were performed with IBM SPSS version 23.0 (IBM Corp., Armonk, NY, USA). The GraphPad Prism 7.0 software (GraphPad Software, La, Jolla, CA, USA) was used for figure production. Two-tailed p values less than 0.05 were considered to be statistically significant. 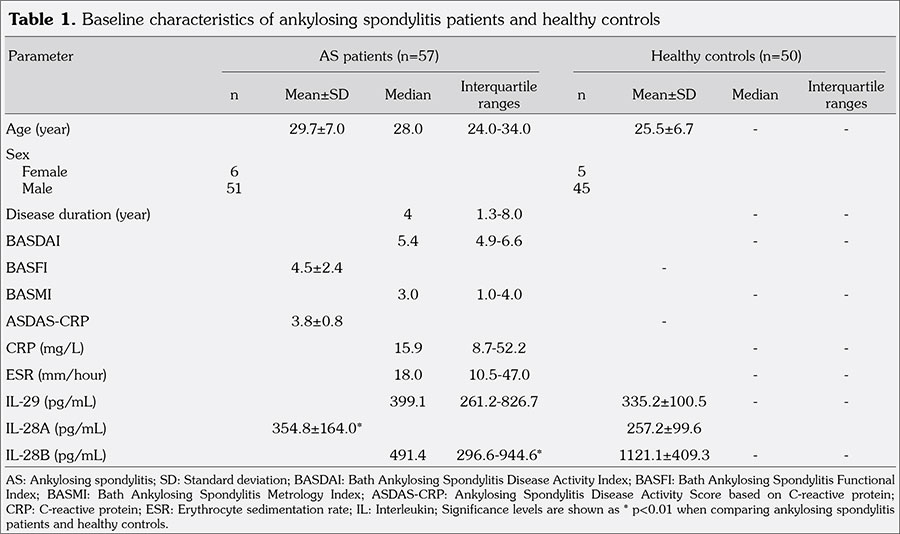 Table 2. Disease activity indexes and type-III interferons in ankylosing spondylitis patients before and after treatment
×

We investigated the disease activity indexes at different time points (Table 2) and found a significant decrease in disease activity indexes at first, third, sixth months after TNFi treatment compared with baseline, including ESR, CRP, BASDAI, and ASDAS-CRP (p<0.01). We demonstrated that serum levels of IL-29, IL-28A, IL-28B, ESR, and CRP were in a steady-state level first month after treatment till the sixth month (p<0.05); ASDAS-CRP score continued to decline till third months after treatment, and then remained in a steady- state; BASDAI continued to decline during the treatment period. 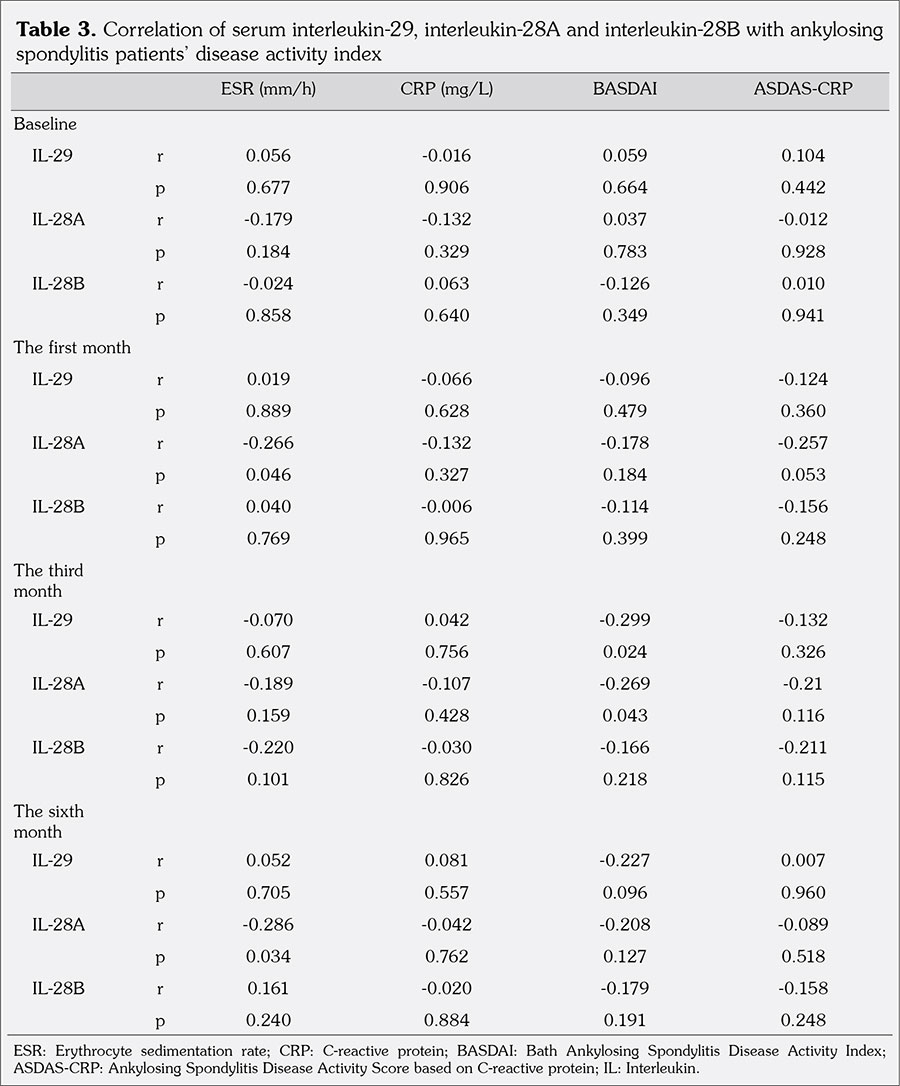 Possible associations between changes in disease activity and changes in IL-29, IL-28A, and IL-28B levels were also examined. However, we did not find any significant correlation between ΔIL-29, ΔIL-28A, and ΔIL-28B levels and Δclinical parameters measured in AS patients at the first month after treatment (p>0.05) (data not shown).

All of the 57 patients in our study were divided into two groups according to their ASAS20 response criteria to TNFi therapy in the first three months. As a result, 46 patients were in the response positive group, while 11 patients were in the no response group. We compared the serum IL-29, IL-28A, and IL-28B levels at baseline between the response positive group and the no response group and detected no significant difference (p>0.05) (data not shown).

The current study found that type-III IFNs are involved in several autoimmune diseases including SLE, SSc, and RA.(7-9) Our previous published studies showed that IL-28B may contribute to avoiding osteoclasia in RA patients, and IL-29 may correlate with disease activity parameters in RA and decline after treatment with DMARDs.(20,21) The pathogenesis of AS is similar to RA, which inflammation disrupts normal bone homeostasis leading to an imbalance of bone resorption and formation.(22) However, it is unclear whether IL-28A, IL-28B, and IL-29 are involved in the pathogenesis of AS.

We demonstrated that serum IL-29 levels in 57 AS patients were not different from those of HCs. Our results were in agreement with a previous work by Wu et al.,(7) who found that the serum IL-29 levels of 21 AS patients and 42 HCs had no significant differences. However, Wu et al.(7) did not explore disease activity indexes and clinical characteristics before and after treatment. Accordingly, we detected that the serum levels of IL-29 at the third months after treatment were significantly increased compared with those of baseline and HCs, and this change was negatively correlated with BASDAI, while serum levels of IL-29 were in a steady-state level at first month after treatment till the sixth month. On the other hand, we did not find any mechanistic explanation to support such association. So, we speculated that IL-29 may be involved in the pathogenesis of AS. To our knowledge, this is the first report to investigate the serum IL-29 levels in AS patients after TNFi treatment and find that IL-29 in AS patients was negatively correlated with BASDAI at three months after TNFi treatment.

In order to further examine the role of type-III IFNs in AS, we compared the levels of serum IL-29, IL-28A and IL-28B levels at baseline between response positive group and no response group. Unfortunately, there was no significant difference between the two groups. Thus, whether type-III IFNs level can be used as a biomarker for the baseline predictors of TNFi treatment response in AS still requires prospective longitudinal observational cohort studies.(24)

Our study has some limitations. We were aware that the short-term follow-up, moderate sample size, strict inclusion criteria, and lack of other controls (e.g., inactive AS patients and other drug treatment group) may limit our results to find any correlation at baseline between type-III INFs and disease activity parameters. In addition, although changes in serum levels of type-III INFs in AS treated with TNF-α inhibitors were evaluated, there was no direct evidence that type-III IFNs were correlated to disease activity. Thus, further researches are necessary to identify the correlation between type-III IFNs and clinical parameters.

In conclusion, to our knowledge, this is the first study to investigate serum levels of type-III INFs in AS patients and show that type-III INFs may be involved in the pathogenesis of AS. This study may provide new targets for the treatment of AS. Further research is necessary to identify type-III INFs’ functions, expression mechanisms and signaling pathways in AS pathogenesis.