Objectives: This study aims to identify the relationship between balance and sagittal spinopelvic alignment in ankylosing spondylitis (AS) and compare patients with or without lumbopelvic mismatch in terms of balance.
Patients and methods: We enrolled 41 patients (22 males, 19 females; mean age 41.3±8.9 years; range 21 to 57 years) into the study. Sagittal spinopelvic alignment was evaluated measuring thoracic kyphosis, lumbar lordosis, sacral slope, pelvic tilt and pelvic incidence on lateral standing X-rays of the whole spine including the femoral heads. Patients were grouped according to presence of lumbopelvic mismatch (lumbar lordosis- pelvic incidence >10o). Clinical parameters including age, body mass index, pain (Visual Analog Scale), disease activity (Bath Ankylosing Spondylitis Disease Activity Index), and disease duration were recorded. Posture was evaluated measuring tragus-to-wall distance, modified Schober’s test and chest expansion. A computerized pressure plate system (NeuroCom Balance Master®) was used for evaluating static and dynamic balance. Correlations between sagittal spinopelvic alignment parameters and balance were analyzed. Patients with or without lumbopelvic mismatch were compared in terms of balance.
Results: Patients took shorter steps, as thoracic kyphosis increased and sacral slope decreased (r= -0.391, p=0.012; r=0.344, p=0.028). Patients with lumbopelvic mismatch had significantly higher sway velocity on firm base with eyes closed and on foam base when the eyes open and closed . They also walked more slowly compared to patients without lumbopelvic mismatch (p>0.05).
Conclusion: Lumbopelvic mismatch impaired both static and dynamic balance, while increased thoracic kyphosis and decreased sacral slope impaired only the dynamic balance in patients with AS. Further studies with larger sample size and longer follow-ups need to be conducted to identify the mechanism of spinal deformities and balance disorders in patients with AS.

Ankylosing spondylitis (AS) is a chronic inflammatory disease characterized by progressive inflammation of the vertebral joints.(1) Either inflammation of the vertebral joints, or antalgic posture may cause postural changes including flattened lumbar lordosis, increased thoracic kyphosis and hip flexion in patients with AS.(1-5) Khan(6) suggested that postural changes were associated with poor balance in patients with AS. It has also been reported that patients with AS had poorer balance than healthy controls.(3) It has been shown that dynamic balance was impaired as tragus-to-wall distance increased and lumbar spine mobility decreased.(7-10) However, the association between the sagittal spinopelvic alignment (SSA) and balance is still unclear.

Improvement of the lumbar lordosis after corrective osteotomies was associated with better clinical outcomes.(13) Postoperative spinal alignment should be properly planned before the spinal deformity surgery.(14) Fall prevention is important, since falls increased the morbidity and mortality in patients with AS.(15,16) Risk factors for falls and impaired balance should be understood to prevent falls in patients with AS. Also, assessment of the association between sagittal spinopelvic parameters and balance may provide better surgical plans and outcomes. The balance impairment and risk factors for falls in patients with AS were previously reported.(15) However, to our knowledge, none of the previous studies focused on the association between the SSA and balance in patients with AS. Therefore, in this study, we aimed to identify the relationship between balance and SSA in AS and compare patients with or without lumbopelvic mismatch in terms of balance.

We enrolled 41 patients with AS (22 males, 19 females; mean age 41.3±8.9 years; range 21 to 57 years), who visited the rheumatology outpatient clinic of Marmara University School of Medicine Department of Physical Medicine and Rehabilitation between January 2014 and December 2015. The institutional review board approval was obtained from the Ethics Committee of Marmara University School of Medicine (Approval date: 12/06/2013, project number: 09.2013.0316). Oral and written informed consents were obtained from all participants. This study was conducted in accordance with the principles of the Declaration of Helsinki. Patients were excluded if they met any of the following criteria: age >70 years, having severe ankylosis and range of motion limitation in lower extremity joints due to advanced AS, patients with orthopedic problems in the lower extremities due to other problems (osteoarthritis etc.), history of previous spinal and/or lower limb surgery, cardiovascular disorders, neuromuscular or systemic disease that may affect balance (multiple sclerosis, diabetes mellitus etc.), malignancy, psychiatric disorders, cognitive impairment, visual and auditory deficits, presence of vitamin D deficiency or osteoporosis. 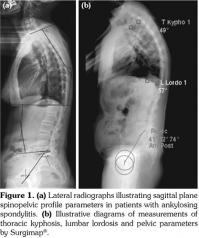 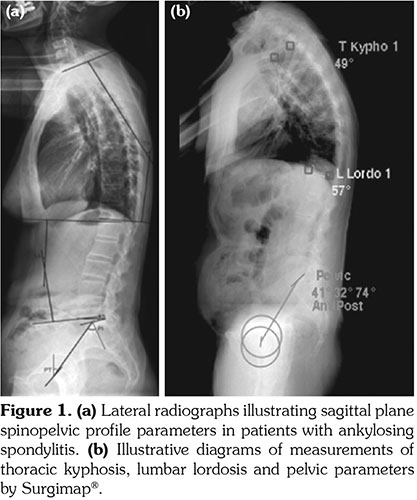 Sacral slope:(22,23) The angle between the upper sacral endplate and the horizontal plane.

Pelvic tilt:(22,23) The angle between the line joining the middle of the sacral endplate and hip axis and the vertical line.

Pelvic incidence:(24) The angle between a line perpendicular to the sacral endplate at its midpoint and a line joining the midpoint and the hip axis.(12,17)

All patients were assessed in the afternoon to eliminate the effects of morning stiffness. In weight bearing squat test, we evaluated the difference in percentage of body weight on each foot while standing, and then with knees flexed at 30°, 60°, and 90°.

The modified clinical test of sensory interaction on balance had two parts. In the first part, the patient was requested to stand on a firm base with eyes open. Then, patient stood on a firm base with eyes closed. This test was also repeated on a foam base. Each part was performed three times. Then, we calculated the means of sway velocity of firm or foam bases when the eyes open and closed.

In walk across test, patient was asked to walk as usual for three times. Then, the mean values of step width, step length, step length symmetry and speed were calculated.

The tandem walk test was also repeated for three times. Then, the mean values of step width, speed and end sway were calculated.

The step and quick turn test was also repeated for three times for each side. In this test, patient was asked to step forward and turn 180° back without taking the step off. The mean values of turning time and sway were calculated.

Statistical Analysis
G*Power version 3.1.9.2 (Heinrich Heine University, Dusseldorf, Germany) was used for sample size estimation. Data were analyzed using IBM-SPSS for Windows version 22.0 (IBM Corp., Armonk, NY, USA). The histogram and normality plots and Shapiro-Wilk normality test were used for data distribution analysis. Analysis of the main characteristics of patients was performed using descriptive studies. Data were expressed by mean ± standard deviation. The two groups (patients with or without lumbopelvic mismatch) were compared using Mann-Whitney U test and data were expressed as median (minimum-maximum). Spearman’s rank was used for analyzing the association of SSA with balance. A p value of <0.05 was considered statistically significant.

Demographic, clinical, postural parameters and SSA parameters in patients with AS were presented in Table 1. 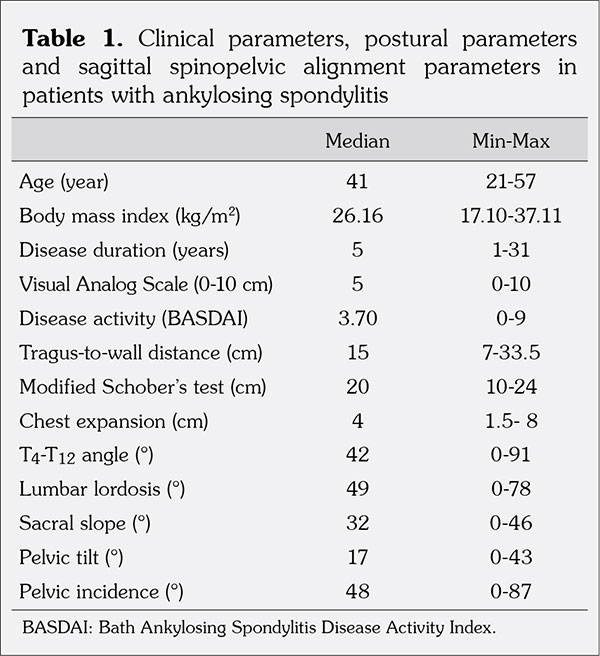 As thoracic kyphosis increased and sacral slope decreased (in other words, as the spine became C-shaped on lateral X-rays), patients took moderately shorter steps (r=-0.391, p=0.012; r=0.344, p=0.028). Among sagittal alignment parameters, the most significant correlations were detected between the lumbar lordosis and sacral slope, as expected (r=0.570, p<0.001). Pelvic tilt increased, as patients with AS had higher pelvic incidence (r=0.537, p<0.001) (Table 3). Patients with lumbopelvic mismatch (males=13, females=13) had significantly higher sway velocity while standing with eyes closed on firm base and with eyes open and closed on foam base. They also walked more slowly compared to patients without lumbopelvic mismatch (Table 4).

Table 3. Correlation of sagittal spinopelvic alignment with balance in patients with ankylosing spondylitis
×

Table 4. Clinical parameters and balance in patients with or without lumbopelvic mismatch
× 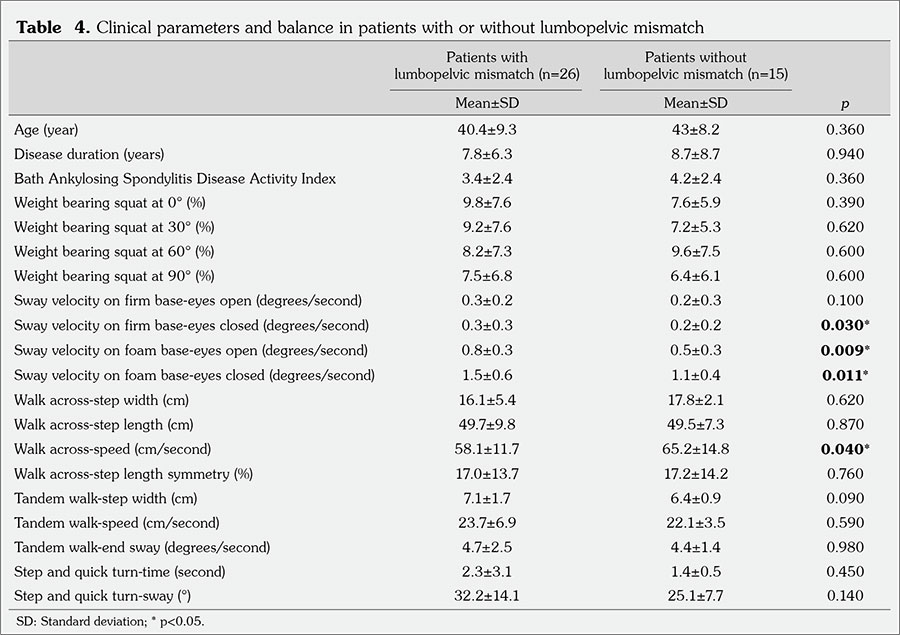 The orientation and harmonization of the lumbosacral pelvic junction play a key role in SSA of the spine. Lumbopelvic mismatch is an important measure for SSA and it is strongly associated with postoperative pain and disability.(11) Measurement of SSA is neglected in daily practice although surgical treatment of spinal deformities in AS increased in recent years.

Sagittal spinopelvic alignment parameters were associated with pain, and balance. Lumbopelvic mismatch impaired both static and dynamic balance. We suggest a comprehensive evaluation of the spine, pelvis, and femoral shaft to avoid balance disorders in patients with AS.

Our study has some limitations. First, we did not have a control group of healthy volunteers, since it would have been unethical to take X-rays of people when there was no health benefit for them. Second, we did not include interactions with hip, knee and ankle and sacroiliac joints, which are important in AS. However, we excluded patients with severe ankylosis and range of motion limitation in lower extremity to eliminate these effects.