Pneumatosis intestinalis (PI), characterized by intramural gas in the gastrointestinal tract, is considered a surgical emergency due to associated pneumoperitoneum and bowel ischemia. However, benign PI is a rare gastrointestinal complication of connective tissue diseases (CTD) not associated with perforation.(1,2) Early recognition can prevent unnecessary investigations and surgery. In this article, we describe a unique case whereby non- operative management can be a viable form of treatment for such patients.

A 62-year-old female patient, diagnosed with mixed connective tissue disease (MCTD) five years priorly, presented with incidental findings of pneumoperitoneum on an outpatient chest X-ray (Figure 1). At initial diagnosis, she had inflammatory polyarthritis as evidenced by synovitis at the metacarpophalangeals and proximal interphalangeals bilaterally, Raynaud’s phenomenon, and swollen fingers (sausage appearance) with associated sclerodactyly. Serology showed positive anti-nuclear antibody (1:1200) and anti-ribonucleoprotein. All other autoantibodies were negative. She had initially been managed with oral steroids but was never on any immunosuppressant due to mild disease and patient preference. She had a history of vague abdominal discomfort, dysphagia and diarrhea since diagnosis, and did not report worsening of her baseline symptoms. On presentation to hospital, she was hemodynamically stable and her physical examination revealed a non-tender abdomen with no evidence of peritonitis. The patient had multiple comorbidities, which were severe chronic obstructive pulmonary disease, remote viral cardiomyopathy, small intestinal bacterial overgrowth (SIBO) and gastroesophageal reflux disease. She was not on corticosteroids, antibiotics or any immunosuppressant. 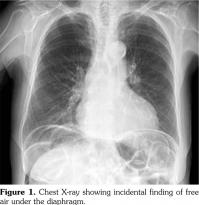 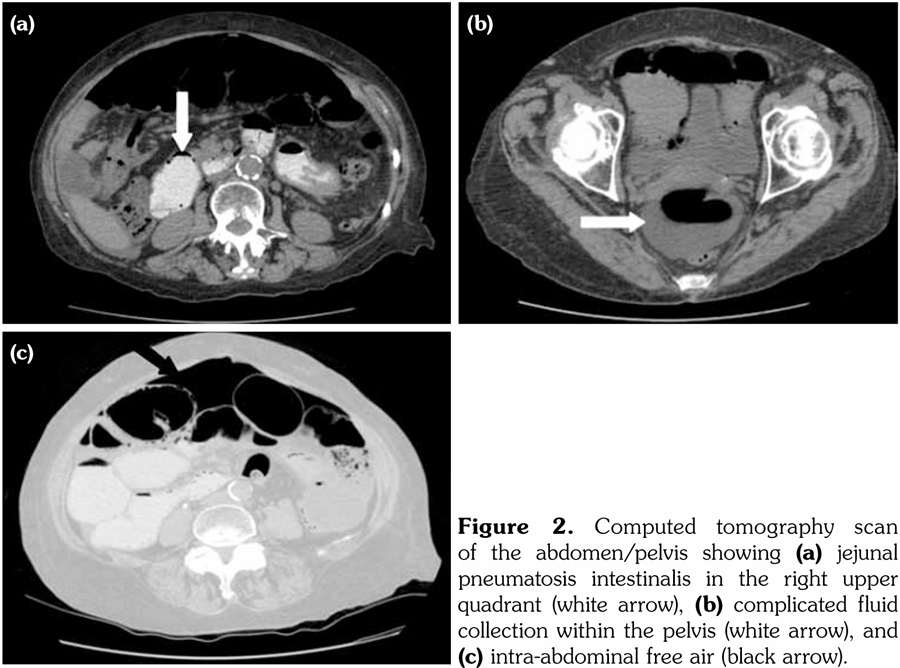 However, given the patient’s comorbidities, stable condition and lack of peritonitis, the general surgeon recommended conservative management with intravenous fluids and bowel rest. A repeat CT scan on post-admission day two revealed resolution of the pneumatosis and focal volvulus, but persistent intra-abdominal free air and free fluid. She was started on oral amoxicillin and metronidazole for possible SIBO and discharged on post-admission day three. She was reviewed in clinic shortly thereafter, at which point her clinical condition remained stable.

Two months following admission, a routine CT scan revealed recurrence of intra-abdominal free air (Figure 3). However, given her stable symptomatology, it was decided that she did not require re-admission. Treatment of SIBO, which was deemed to have been the cause of her benign PI, was continued with oral antibiotics and since then she has had complete resolution of her abdominal pain and diarrhea.

Pneumatosis intestinalis is a rare disease characterized by the accumulation of intramural gas within thin walled cysts in the gastrointestinal tract. PI can be associated with pneumoperitoneum and is generally an ominous clinical finding suggesting bowel ischemia. In connective tissue diseases, PI has been described in systemic sclerosis, systemic lupus erythematosus, and myositis.(3) A literature review reveals only a few case studies of PI in MCTD. In patients with CTD who present with pneumotosis, treatment often includes urgent surgery.(2,4) Here, we have described a unique case of recurrent pneumatosis intestinalis and spontaneous pneumoperitoneum without evidence of peritonitis in a patient with long- standing mixed connective tissue disease, which was managed non-operatively.

The etiology of PI in MCTD is not fully understood, but several mechanisms have been suggested. Bacterial overgrowth and increased intraluminal production of hydrogen may compromise mucosal integrity, leading to translocation of gas into the bowel wall without true perforation. This allows for the formation of gas blebs in the sub-serosal layers. Free-intra- abdominal air is thought to occur secondary to bleb rupture.(4) Other theories suggest minute perforations in intestinal diverticula from ischemia.(5) Drugs, such as corticosteroids, have shown to deplete lymphatic tissue in the Peyer’s patch cells of the intestine enabling gas entry into the intestinal wall.(1) A review of patients with systemic sclerosis and PI reported that 33% of them were on corticosteroids.(6)

In CTD patients, PI usually appears later in the disease and has a subacute, progressive course. Several cases reveal that the development of PI depends more on the severity of gastrointestinal tract involvement than on disease duration.(4) Interestingly, benign spontaneous pneumoperitoneum may persist for years without development of peritonitis.(5) Since free air is absorbed from the peritoneal cavity, persistent pneumoperitoneum implies a continuous leak of air into the peritoneal cavity. As seen in our patient, those with CTD may not present with typical symptoms and may have a physical exam that is completely discordant with the severity of the imaging findings. Therefore, the presence of pneumoperitoneum on imaging may be incorrectly interpreted as perforation, resulting in unnecessary hospitalizations and possible surgery.

Management decisions in MCTD patients with PI must focus on symptomatology as well as imaging. Traditional indications for surgery, such as pneumoperitoneum must be interpreted within the context of the underlying CTD. Benign pneumoperitoneum may be present for years without complications. Furthermore, many of these patients are on chronic corticosteroids, posing challenges during diagnosis, surgery and postoperatively.

Current evidence-based treatment for PI in CTD relies on observational and case study data. Non-operative treatment focuses on symptomatic relief with antibiotics, bowel rest, and fluids.(4,7) High flow oxygen has also been shown to be effective in numerous case reports by attenuating gaseous cysts and by being toxic to the anaerobic gut bacteria.(2,4,8) About 3% of patients with PI develop complications such as volvulus, perforation, obstruction and hemorrhage.(2) Greenstein et al.(9) reported age >60, ongoing nausea, and leukocyte count >12,000/mm(3) as factors associated with death and requiring surgical intervention. Wayne et al.(10) have also proposed a vascular disease score which consists of vascular risk factors, abdominal pain, peritonitis, and lactic acidosis which were predictive of positive intraoperative findings. Neither of these scores has been prospectively validated in the literature and no formal therapy has been established for benign PI in CTD. Overall, early recognition and watchful monitoring for bowel necrosis or perforation are preferred over surgical exploration.

In conclusion, the present case demonstrates a non-surgical approach to recurrent PI, with pneumoperitoneum, in a patient with MCTD. To our knowledge, non-operative management in such a patient has only been reported once before.(11) By avoiding surgical interventions in such patients, we can circumvent the morbidity associated with exploratory laparotomy and bowel resection. Meticulous correlation of the clinical presentation with corroborative laboratory testing should determine whether a conservative medical approach or emergency surgical exploration is appropriate.(12)