Symptoms of infantile inflammatory bowel disease (I-IBD) can be life-threatening and associated with poor prognosis. The presence of Mediterranean fever (MEFV) gene mutations play an important role in treatment of I-IBD. In this article, we describe a case of I-IBD with a resistant fistula, in which remission occurred following colchicine therapy. The patient was a six-month-girl with complaints of bloody diarrhea and a perianal abscess of three months duration. Laboratory tests revealed elevated inflammatory parameters, hypoalbuminemia, and anemia. Results of repeated viral, bacterial and parasitic analyses were negative. Endoscopic and histopathological examinations confirmed a diagnosis of I-IBD. Although diarrhea episodes decreased following intensive conventional treatment with immunosuppressive therapy and anti-tumor necrosis factor, the perianal abscess and fistula did not resolve. Molecular genetic analysis to identify causes of infantile disease revealed the MEFV gene mutation. Thus, colchicine was added to the treatment regimen. Following treatment with colchicine, defecation returned to normal, and the fistula resolved. The MEFV gene mutation should be investigated in children with infantile colitis and resistant fistulas, particularly in Mediterranean countries. In patients with infantile colitis who have the MEFV gene mutation, colchicine treatment may be an alternative to intensive immunosuppressive therapy.

Inflammatory bowel disease (IBD) has been categorized in pediatric patients as follows: very early onset IBD (<6 years), infantile IBD (<2 years) and neonatal IBD (<28 days).(1) The symptoms of infantile inflammatory bowel disease (I-IBD) can be life-threatening and associated with poor prognosis. Environmental factors and genetic predisposition may also play a role in I-IBD.(2) The presence of specific mutations affecting the interleukin-10 (IL-10) receptor and Mediterranean fever (MEFV) gene seems to play a fundamental role in I-IBD.(3,4) Previous reports described the response of I-IBD patients with familial Mediterranean fever (FMF) to colchicine therapy.(5) However, none of these patients had perifistulas. In this article, we describe a case of I-IBD with a fistula resistant to conventional treatment and anti- tumor necrosis factor (anti-TNF) medication that resolved following colchicine therapy.

Our patient was a six-month girl with complaints of bloody diarrhea and perianal abscess of three months duration. There was no kinship between the parents and no family history of inflammatory bowel disease. The first physical examination revealed generalized edema, pale, perianal hyperemia and a perianal abscess. The patient’s body temperature was 38°C (axillary). Table 1 presents body measurements and the results of laboratory tests. A stool microscopy revealed blood and mucus. An infectious etiology was suspected, but the results of repeated viral, bacterial and parasitic analyses were negative. To detect immunodeficiency, immunoglobulin testing was conducted, but the values were within age-specific reference ranges. Coeliac markers were negative. Antinuclear antibody (ANA) testing for autoimmune diseases revealed 1/1,280 positives, but ANA screen profile and anti-double stranded deoxyribonucleic acid were negative and C3-C4 complement levels were normal. While hospitalized, the patient developed an anal fistula. Based on her clinical status, our preliminary diagnosis was IBD. Endoscopic and histopathological examinations revealed I-IBD (Figures 1 and 2). The results of a lymphocyte panel analysis were normal (CD3: 50%, CD19: 37%, CD4: 38%, and CD8: 15%). Tests for anti-neutrophil cytoplasmic antibodies and anti- Saccharomyces cerevisiae antibody markers were negative. The results of genetic tests to detect human leukocyte antigen-B5 and IL-10 receptor mutations were negative. An eye examination revealed no obvious uveitis or iridocyclitis. The patient did not have any other extra-intestinal symptoms like arthritis, aphthous ulcers or skin disease. A written informed consent was obtained from the parent(s) of patient. 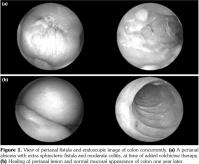 Figure 1. View of perianal fistula and endoscopic image of colon concurrently. (a) A perianal abscess with extra sphincteric fistula and moderate colitis, at time of added colchicine therapy. (b) Healing of perianal lesion and normal mucosal appearance of colon one year later.
× 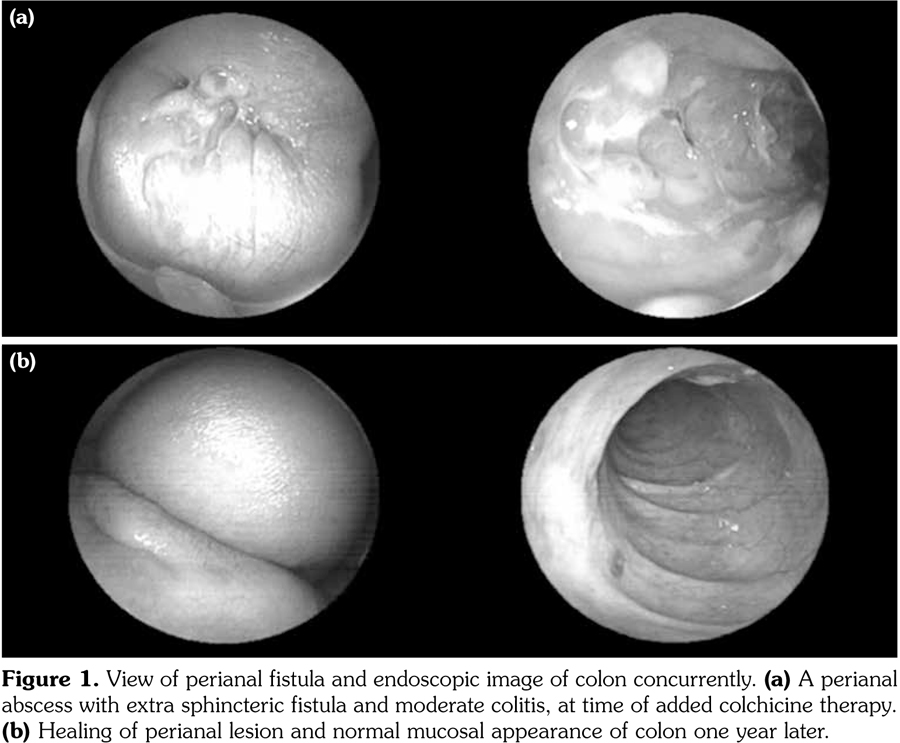 Treatment with mesalazine and corticosteroid was commenced. Although the diarrhea episodes decreased, none of the other symptoms improved. Azathioprine was added to the treatment. After two months of this treatment, the diarrhea and fistula remained. Thus, seton therapy was added to the treatment regimen, but this was not effective. After six months, anti-TNF (infliximab) therapy was initiated. Despite intensive infliximab therapy for 10 months, the patient showed only a limited response. The diarrhea episodes decreased, but the perianal abscess and fistula did not resolve.

Patient’s symptoms worsened when she was 18 months old, with the manifestation of fever at the time of the IBD attacks. Family history was insignificant and the patient did not have any other symptoms typical for FMF. However, the previous studies reported that mutations of MEFV gene could play role in patients with infantile colitis without typical FMF findings;(4,5) so, MEFV gene analysis was planned. Sequence analysis of the four exons (2, 3, 5 and 10) of MEFV gene revealed a heterozygous E148V mutation. We decided to initiate colchicine therapy. Prior to the treatment, a colonoscopy was performed, and a biopsy specimen was obtained and assessed (Figures 1 and 2). Three months after starting the colchicine treatment and reducing the corticosteroid dose, defecation returned to normal, and the fistula showed some improvement. Acute phase reactors also returned to normal (Table 1). MEFV gene molecular genetic analysis was repeated with next-generation sequencing of all 10 MEFV exons and flanking intron-exon boundaries. Analysis revealed only a heterozygous E148V mutation. One year after the commencement of colchicine treatment, the perianal fistula closed. The patient underwent control colonoscopy examinations for two years (Figures 1 and 2). The treatment was continued for five years. During this period, the patient was not hospitalized with diarrhea, and there was no recurrence of the perianal abscess or fistula. The patient is now six years old and continues to be followed-up. Her growth and development are compatible with her age. No adverse effects of the colchicine treatment were observed during the follow-up period.

Previous studies reported higher rates of MEFV gene mutations in patients with a diagnosis of IBD as compared to the general population.(4,6) Colitis, ileocolitis and perianal disease have been reported in children with FMF.(7) Epidemiological data revealed that IBD was more common in non- Ashkenazi Jews and particularly severe in patients and families with FMF.(8) Mutations of the MEFV gene lead to autoinflammatory diseases and may predispose individuals to chronic inflammatory disorders, such as Crohn’s Disease (CD) and ulcerative colitis. The MEFV gene was reported to interact with and modulate the activity of several inflammasome components, including cryopyrin, caspase-1 and its substrate, pro-IL-1b.(6) Co-localization of the MEFV and nucleotide- binding domain, leucine rich family, pyrin containing 3 (NLRP3) gene products (pyrin and cryoprin, respectively) within the same signaling pathway has also been demonstrated.(6)

Previous studies reported heterozygous or homozygous mutations of M694V in Turkish children with infantile colitis screened for the MEFV gene.(4,9) In common with the present case, none of these patients had fistulas or perianal abscesses. Karban et al.(10) recently reported that the prevalence of E148Q MEFV mutations among CD patients and controls was similar but that E148Q was more common in CD patients with perianal disease. A heterozygous E148V MEFV mutation was detected in our patient.

Colchicine has been used to treat colitis in Behcet’s disease, infantile colitis and secondary amyloidosis in ulcerative colitis.(5,11,12) In our patient, the fistula and pancolitis persisted, despite intensive medical therapy. In addition, the patient’s weight and growth were lower than the normal range before the colchicine therapy. Following the treatment with colchicine, azathioprine and mesalazine, the patient showed a dramatic improvement. New genetic mutations in children with infantile colitis have been reported.(13) In addition to these mutations, the MEFV gene mutation should be investigated in children with infantile colitis and treatment-resistant fistulas, particularly those in Mediterranean countries. In patients with infantile colitis who have the MEFV gene mutation, colchicine treatment may be an alternative to intensive immunosuppressive therapy.