Extracorporeal Shockwave Therapy Versus Kinesiology Taping in the Management of Plantar Fasciitis: A Randomized Clinical Trial

Plantar fasciitis (PF) is the most common cause of heel pain in adults. Although the exact cause is unknown, risk factors include middle age, obesity, excessive foot pronation, pes cavus, excessive running, pes planus, and prolonged standing.(1,2) The underlying condition for PF is tissue breakdown near the site of origin of the plantar fascia at the medial tuberosity of the calcaneus.(1,2) Patients may present with heel pain with their first steps in the morning or after prolonged sitting, and sharp pain with palpation of the medial plantar calcaneal region.(3,4) Stretching the plantar fascia and weight-bearing on the heel activate symptoms.(4)

Conservative therapy provides significant relief in approximately 90% of patients with PF.(1) Numerous methods are in use to treat PF, including nonsteroidal anti-inflammatory drugs, cortisone injections, foot orthoses, physical therapy, stretching exercises, night splints, and extracorporeal shockwave therapy (ESWT).(5-8) A small number of patients undergo surgery, including spur resection and release of all parts of the fascial band.(8) ESWT is a relatively new treatment used to alleviate heel pain, as well as other conditions, including tennis elbow, calcifying tendinopathy of the shoulder, and non-union fractures of the long bones.(9)

Another method for treating PF is kinesiology taping (KT), which is widely indicated in musculoskeletal pathologies. It facilitates circulation and motion, elevates skin and subcutaneous interstitial tissues, decreases inflammation and pain, increases performance, enhances neuromuscular re-education, prevents injury, and speeds recovery.(10) Different applications and indications are currently under investigation, and data are accumulating. Supportive taping is an effective short-term treatment for plantar heel pain.(11) Low-Dye taping is one of the most widely used techniques for treating PF.(12) To the best of our knowledge, no studies have compared ESWT and KT in the treatment of PF to date. Therefore, in this study, we aimed to compare the efficacy of ESWT and KT in the treatment of PF.

We conducted this randomized clinical trial with a follow-up for five weeks at Konya Training and Research Hospital Outpatient Clinic of Physical Medicine and Rehabilitation Department between November 2015 and February 2016. A total of 99 consecutive patients with plantar heel pain were screened for admission into the trial. Of them, 19 consecutive bilateral PF patients were not considered. Thus, 80 patients satisfied the eligibility criteria and were randomized into two groups as ESWT and KT groups (Figure 1). In the ESWT group, three patients did not appear for their assigned treatment regularly; therefore, the group included nine males and 28 females (mean age 47.8±12.4 years; range 40 to 55 years). In the KT group, five patients did not appear for their assigned treatment regularly, and two patients received steroid injections due to severe pain; therefore, the group included seven males and 26 females (mean age 47.7±9.8 years; range 40 to 55 years). The diagnosis of PF was based on tenderness localized to the medial tubercle of the calcaneus, and pain that started with the first step in the morning and worsened with weight-bearing activity. Assessments were performed before the procedure and at five-week follow-up visit. The following inclusion criteria were used: pain (i) was reported with palpation of the plantar fascia, (ii) was localized and sharp but not radiating, (iii) was worse with the initial step after an extended period of rest, and (iv) decreased initially after the first few steps but exacerbated with increased activity.(13) Exclusion criteria comprised (i) history of previous steroid injections, (ii) previous foot surgery, lumbar spine disc herniation or back injury, or (iii) history of rheumatic disease. The study protocol was approved by the Medical Faculty of Selçuk University Ethics Committee. A written informed consent was obtained from each patient. The study was conducted in accordance with the principles of the Declaration of Helsinki. 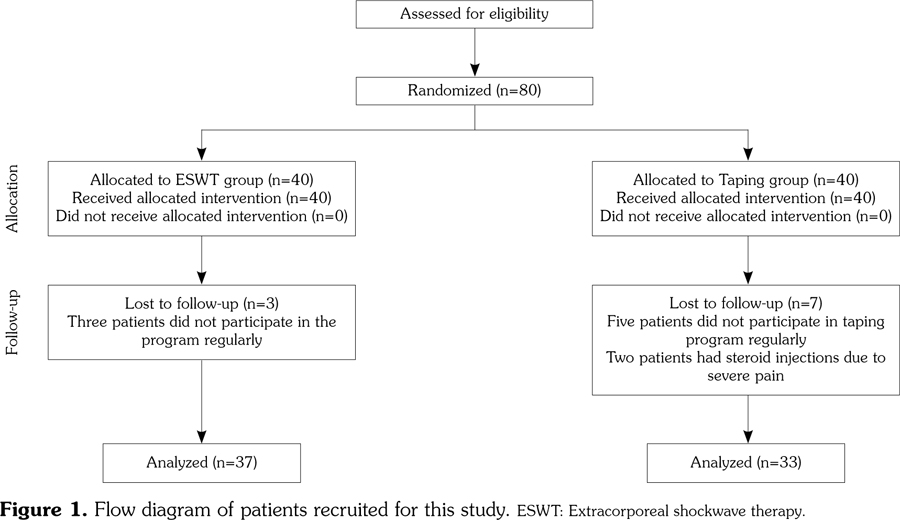 The ESWT (Dornier Compact Delta: Germany) was performed once a week for five weeks, on the 12-15 Hz frequency setting; 2500 pulses at two-three bar pressure were applied. During ESWT sessions, patients were in a prone position with their feet extending beyond the examination table, and their knee and hip joints in a neutral position. Using ultrasound gel as a coupling medium, the head of ESWT shock wave device was applied to the inferior aspect of the calcaneus. The target area was the region of maximum tenderness in the medial calcaneus. No local anesthetic was applied. All patients were allowed for weight-bearing.

As part of the KT protocol, the target KT site was marked, starting from the posterior margin of the calcaneus bone and ending at the metatarsal joints. During the procedure, patients were in a prone position with their knee joints and ankle joints in a neutral position. Kinesiology tape was first applied from the calcaneus to the metatarsal heads with maximum stretching toward the plantar fascia. Four horizontal pieces were applied to the soles of the feet to support the medial arch. The first horizontal piece was applied from the lateral malleolus to the medial aspect of the foot, and then the second piece was applied from the medial malleolus to the lateral aspect of the foot. The third and fourth pieces followed the same pattern with an overlap of approximately one-third of the width of the tape. The horizontal pieces were applied with maximum stretching (Figure 2). The KT procedure was repeated every five days for five weeks.(10) The tape (Kinesio Tex, Kinesio Taping, US) used for this study was waterproof, porous, and adhesive.

Statistical analysis
The SPSS for Windows 15.0 software package (SPSS Inc., Chicago, IL, USA) was used for the statistical evaluation of the data. Conformity of continuous variables with normal distribution was investigated using the Kolmogorov-Smirnov test. All variables were distributed normally. Descriptive data were presented as the mean ± standard deviation. Demographic and clinical characteristics were compared using the Chi-square test. Within-group and between-group differences were investigated. The independent samples t-test was used to compare the two groups. The paired-samples t-test was used to analyze the differences between the baseline and after treatment values. A p value less than 0.05 was considered statistically significant.

The ESWT and KT groups were similar regarding age, sex, and body mass index (all p>0.05) (Table 1). At the study onset, there were no statistically significant differences between the two groups in their VAS and HTI scores, and FAOS. Five weeks later, both groups showed significant improvement in all parameters within the groups (all p<0.05), but no significant differences were observed between the groups in the VAS and HTI scores (Table 1) and FAOS (Table 2).

In this randomized study, we compared ESWT to KT in patients with PF. To our knowledge, this is the first study to compare ESWT with KT. We observed significant improvement in the VAS and HTI scores, and FAOS in both groups. Possible benefits of KT include increased interstitial space, promoting better blood and lymph flow in the region, decreased inflammation and pain, and quicker recovery.(10) The efficacy of arch support taping in patients with PF has been shown in previous studies.(11-13,15-19) Several techniques are utilized in clinical practice. The most common techniques are low-Dye taping and augmented low-Dye taping.(12,15,18) Taping applications that decrease pronation are short-term interventions that have been shown to reduce pain in participants with PF.(13,16) Low-Dye taping and augmented low-Dye taping decrease pronation and increase dynamic medial longitudinal arch height during walking and jogging.(15,18,19) Additionally, KT has been found to decrease pressure under the medial and lateral rearfoot while walking.(15,17) Low-Dye taping supports the longitudinal arch of the foot. It has been shown to significantly reduce peak plantar pressures of normal feet during gait, especially the peak plantar pressure in the medial midfoot, and thus could reasonably be expected to help in the management of PF.(20,21) A recent clinical practice guideline(8) recommends that over-the-counter arch support should be considered as part of initial treatment options. Low-Dye taping supports the longitudinal arch of the foot, so low-Dye taping may be a viable alternative to foot orthoses for individuals who cannot tolerate the plantar pressures of an orthotic or for footwear that will not accommodate conventional insoles. 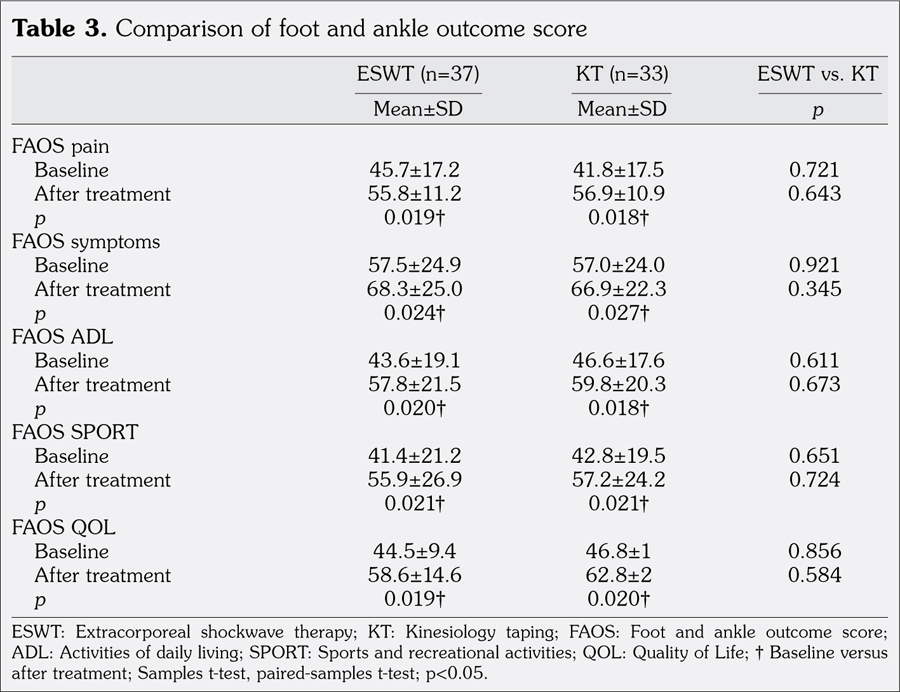 Like KT, ESWT is widely used in the treatment of PF. The efficacy and safety of ESWT on chronic PF have been demonstrated in several randomized clinical trials.(22-26) ESWT causes extreme excitement of the axon, destroys unmyelinated sensory fibers, improves symptoms by initiating an inflammatory response to the secretion of growth factors or nitrous oxide and revitalizes tissues by increasing angiogenesis.(3,9) Some researchers have reported that ESWT is effective in the treatment of PF in comparison to a control group.(25,26) However, other relevant studies have found no benefit to ESWT for PF.(27,28) This discrepancy may be explained by methodological differences. For example, the use of local anesthesia,(23,29,30) applicator position,(23) and the use of different energy densities of ESWT(31) are all factors that may have affected study results. In a study by Lee et al.,(31) a medium-energy (0.16 mj/mm(2)) ESWT group showed statistically significant pain reduction and improved function scores compared to a low-energy (0.08 mj/mm(2)) group. In another study, Park et al.(32) measured the long-term effects of ESWT on PF and found that subjective pain began to decrease one week after the first treatment session, and continued to improve with time, up to a mean of 24 months. KT and ESWT have several advantages over surgery in the treatment of PF. Both ESWT and taping do not require patients to avoid weight- bearing, and allow patients to return to work and the activities of daily life within just one or two days.

Both ESWT and KT have been shown in previous studies to be effective in treating PF.(13,15-21,25,26) In our study, neither method was found to be superior in treating PF.

The major limitation of our study is the lack of a control group, while other limitations include a short follow-up duration, and absence of objective evaluations of the plantar fascia, such as ultrasonography. Nevertheless, a five-week follow-up period is common in many studies for evaluating pain, and the effect of pain on daily activities, in the management of PF.(6) Ultrasonography is an effective diagnostic imaging tool for PF,(6,32) and the absence of ultrasonographic measures of the thickness of the plantar fascia is another limitation of this study.

In conclusion, both ESWT and KT treatments improved pain levels and function and quality of life in individuals with PF. Neither method is superior in treating PF. In the future, well-designed case-control studies evaluating the long-term effects of these treatments should be conducted.