What Impairs Balance in Ankylosing Spondylitis? Posture or Disease Activity?

Objectives: Objectives: This study aims to compare ankylosing spondylitis (AS) patients with healthy subjects in terms of posture and balance, and to identify the factors correlated with balance in AS.
Patients and methods: Thirty patients (17 males, 13 females; mean age 41.7±7.7 years; range 31 to 57 years) with AS and 33 healthy subjects (18 males, 15 females; mean age 41.3±7.0 years; range 26 to 56 years) were included in the study. Participants were assessed in terms of posture and balance. Posture was assessed using tragus-wall distance, modified Schober’s test, and chest expansion. Balance was assessed using device-assisted balance tests. Pain (visual analog scale) and disease activity (Bath Ankylosing Spondylitis Disease Activity Index) were assessed only in AS patients.
Results: Ankylosing spondylitis patients walked more slowly when compared to healthy subjects (p=0.002). As the modified Schober’s test was restricted, AS patients had greater step width in tandem walk and higher sway velocity on foam base (r=-0.418 p=0.022; r=-0.473 p=0.008). Neither Bath Ankylosing Spondylitis Disease Activity Index nor visual analog scale was correlated with balance.
Conclusion: Static and dynamic balance are impaired in AS patients when compared to healthy subjects. Restricted mobility of the spine and advanced kyphosis impaired balance, while pain and disease activity had no correlations with balance.

Ankylosing spondylitis (AS) is a chronic and inflammatory disease, which mainly affects the axial skeleton and leads to morning stiffness in the spine.(1) Progression of the morning stiffness due to chronic inflammation may cause postural changes. Consequently, AS patients may end up having flattened lumbar lordosis and advanced thoracic kyphosis.

Neutral posture is the anatomical alignment of spinal curves, which is coordinated in response to changes in center of gravity (COG). The coordination of posture with the COG is called “balance”. Subjects with postural changes were expected to have a displaced COG, which is difficult to control for AS patients, since they usually have rigid lower limbs.(2) It has been shown that AS patients required more energy to control their COG.(3-5) Impaired control of COG results in balance disorders and falls. Falls were reported as the leading cause of spinal fractures. It has been reported that spinal fractures resulted in higher morbidity and mortality in AS patients when compared to those in healthy subjects.(6)

In this study, we aimed to compare AS patients with healthy subjects in terms of posture and balance, and to identify the factors correlated with balance in AS.

The study included 30 patients with AS (17 males, 13 females; mean age 41.7±7.7 years; range 31 to 57 years), who were admitted to the rheumatology outpatient clinic of Marmara University School of Medicine Department of Physical Medicine and Rehabilitation between February 2014 and September 2014 and 33 healthy subjects (18 males, 15 females; mean age 41.3±7.0 years; range 26 to 56 years) as the control group. The institutional review board approval was obtained from the Ethics Committee of Marmara University Medical School (approval date: 01/12/2011, project number: 09.2011.070). Oral and written informed consents were obtained from all participants. The study was conducted in accordance with the principles of the Declaration of Helsinki. Patients were excluded if they met any of the following criteria: Age >70 years, history of orthopedic disorders, spine or lower limb surgery, cardiovascular disorders, neurologic disorders, psychiatric disorders, cognitive impairment, visual and auditory deficits.

Participants were assessed in the afternoon to eliminate the effects of morning stiffness.

Tragus-wall distance:(8) The distance between the tragus and wall was measured while the subject was standing with his/her heels touching against the wall.

Modified Schober’s test:(2) With the subject in an upright posture, the posterior superior iliac

spines were palpated. The low back of the subject was marked 10 cm above and 5 cm below that point. Then, the subject was requested to touch the floor as well as he/she could. The distance between two marks was measured.

Figure 1. Standing on foam base.
×

All participants completed the device-assisted balance tests. The groups were similar in terms of age and body mass index (Table 1). In AS patients; mean duration of disease and mean Bath Ankylosing Spondylitis Disease Activity Index were 8.6±8.4 years and 4.7±2.6, respectively. In AS patients; means of visual analog scale, TWD, and MST were 5.9±2.1 cm, 17.7±5.6 cm, and 18.6±2.8 cm, respectively.

Table 2. Posture and balance parameters used for assessment of groups
× 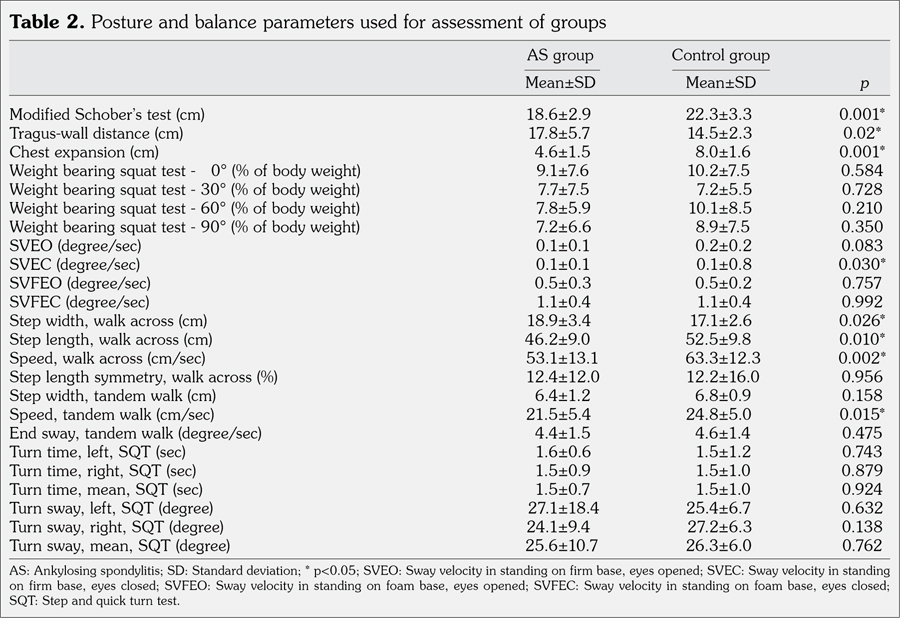 Table 3. Spearman correlations and their statistical significance between balance parameters and postural assessments
×

In this study, we aimed to determine whether AS patients had worse static and dynamic balance than healthy subjects. Our second aim was to determine the factors associated with balance impairment in AS patients. For these purposes, AS patients and age-matched healthy subjects were assessed using postural measurements and device-assisted balance tests. Then; the associations of posture, pain, and disease activity with balance were assessed.

As the kyphosis advanced and mobility of the lumbar spine was restricted, AS patients had more difficulty maintaining their balance while standing on foam. This impairment in static balance can be explained by the impaired gaze stability due to advanced kyphosis and forward head posture in AS patients, as reported previously.(11) AS patients also widened their steps in tandem walk as a compensatory mechanism to maintain their balance on narrow base of support. It has been shown that advanced kyphosis caused a forward and downward shift in COG,(12) impaired postural stability,(10) and dynamic balance(5) in AS patients. Our results indicated that advanced kyphosis and restricted mobility of the spine impaired both dynamic and static balance in AS patients. In another study conducted by Adam et al.,(13) 30 patients with AS were compared to 20 healthy controls in terms of postural stability and dynamic balance via computerized interactive balance system. They reported that there was no difference between healthy controls and AS patients in terms of balance and general stability parameters and they found a negative correlation between Schober’s test and general stability scores.

Our study showed that restricted mobility of the lumbar spine and advanced kyphosis impaired both dynamic and static balance in subjects with AS. It has been reported that restricted mobility of the lumbar spine, hip, knee, and ankle involvement impaired postural control and increased the risk of fall.(14,15) Falls were suggested as the most common causes of spinal fractures which resulted in higher morbidity and mortality in subjects with AS when compared to those without AS.(6) Thus, postural assessment is crucial to predict and prevent balance disorders and falls in AS patients.

We assessed both dynamic and static balance in subjects with AS and healthy subjects by using device-assisted balance tests. Supporting the literature, results of our study showed that AS patients had impaired balance and postural changes were detected to be associated with impaired balance of AS patients.

We recognize our limitations. The device- assisted balance tests were not compared to other validated balance assessment tools and there were limited number of subjects. On the other hand, our control group was age, sex, height, and weight matched to the AS group.

In conclusion, restricted mobility of the lumbar spine and advanced kyphosis impaired both dynamic and static balance, while restricted chest expansion impaired only the dynamic balance in AS. Postural assessment and rehabilitation should be an inevitable part of follow-up to prevent balance disorders and related falls in AS patients. Further studies are required to detect a specific and validated tool to assess balance in AS patients.

We would like to thank Firat Ulutatar, MD, for taking photographs.