Objectives: This study aims to investigate if cardiac involvement may occur in children with familial Mediterranean fever (FMF) without cardiovascular symptoms by using heart rate recovery (HRR) and systolic blood pressure recovery (SBPR) parameters.
Patients and methods: A total of 50 FMF patients (26 males, 24 females; mean age 151±33.4 month; range 60 to 216 month) and 30 healthy controls (18 males, 12 females; mean age 143±43.9 month; range 84 to 228 month) were included in the study. All patients were evaluated by echocardiography. All patients underwent a maximal graded exercise stress test. HRR and SBPR parameters were calculated.
Results: There was a significant decrease in HRR1 value in FMF group (p=0.03). SBPR1 and SPBR2 values were higher in FMF group compared to control group (0.96±0.12 vs 0.88±0.12 and 0.95±0.09 vs 0.91±0.11, respectively); and the high SBPR1 value was statistically significant (p=0.02). FMF presence had a negative correlation with HRR1 (r= -0.26, p=0.03) and a positive correlation with SBPR1 (r=0.29, p=0.02). There was a negative correlation of M694V homozygous mutation with HRR1 and HRR2 values (r= -0.43, p=0.004, r=-0.42, p=0.005).
Conclusion: Cardiac involvement may occur in FMF patients without cardiovascular symptoms. Impaired SBPR and decreased HRR response may indicate increased cardiovascular risk in these patients despite normal exercise stress test results.

Familial Mediterranean fever (FMF) is an autosomal recessive auto inflammatory disease characterized by recurrent fever attacks and inflammation of the serous membranes (peritonitis, pleuritis, pericarditis, arthritis, etc.).(1) Cardiovascular involvement is one of the major causes of mortality and morbidity in patients with FMF.(2)

This study was conducted by the Pamukkale University’s Medical Faculty Pediatric Rheumatology Department and Cardiology Department between January 2015 and June 2015. A total of 50 patients (26 males, 24 females; mean age 151±33.4 month; range 60 to 216 month) who were not in attack period and were being followed-up with a FMF diagnosis according to Tel Hashomer and a new set of criteria for children(10,11) were included. In addition, 30 healthy controls (18 males, 12 females; mean age 143±43.9 month; range 84 to 228 month) with no cardiologic or rheumatologic problems were included. Those with comorbid secondary chronic rheumatic problems to a FMF diagnosis were excluded. The onset age of disease, disease duration, clinical findings (fever, abdominal pain, chest pain, joint pain, and rash), dose and duration of medication, and Mediterranean fever mutation were recorded for each patient. All patients were evaluated by echocardiography before the study to eliminate congenital heart defects. The study protocol was approved by the Pamukkale University’s Medical Faculty Ethics Committee. The study was conducted in accordance with the principles of the Declaration of Helsinki.

The patients and control group underwent a maximal graded exercise stress test using a Quinton treadmill system with the modified Bruce technique developed for children.(12) The 12-lead electrocardiographic monitorization was performed continuously during the test. Blood pressure and heart rate were measured automatically using a Tango exercise blood pressure-monitoring device before every stage and at the second minute in every stage of the exercise stress test. Maximal target heart rate during the exercise stress test was calculated as subtraction of age (year) from 220. The exercise stress test was continued until reaching 95% of the maximal heart rate. The HRR differences within the first five minutes after exercise (HRR1, HRR2, HRR3, HRR4, and HRR5) were calculated by subtracting the heart rate at each minute from the maximal heart rate. The ratio of the third-minute systolic blood pressure (SBP) of recovery period to peak SBP was considered to be SBPR1. Additionally, the ratio of the third-minute SBP of recovery period to the first-minute SBP was considered to be SBPR2.(8) When the exercise capacity reached peak exercise, it was calculated as the total metabolic equivalent units.

Statistical analysis
All data were evaluated using the SPSS version 16.0 software (SPSS Inc., Chicago, IL, USA). Continuous variables were expressed as mean ± standard deviation and categorical variables were expressed as percentages. The Chi-square test and unpaired t test were used for evaluating comparisons of categorical and continuous variables between the two groups. Correlations between HRR and SBPR parameters were calculated by the Pearson’s correlation analysis. A p value of ≤0.05 was considered statistically significant. 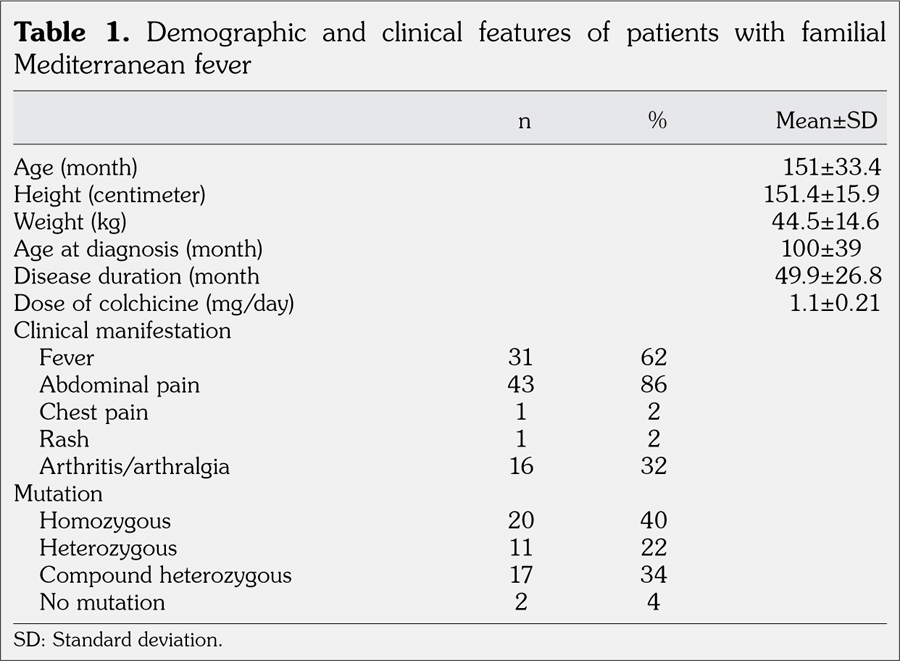 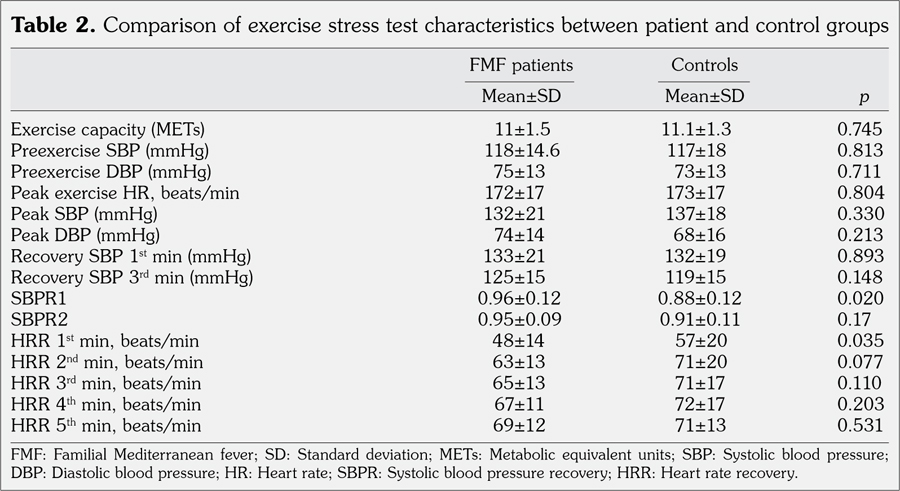 The autonomic nervous system plays a major role in the regulation of cardiovascular functions. Studies in the literature have investigated the relationship between autoinflammatory diseases and cardiac autonomic dysfunction.(13,14) HRR is a frequently used technique for assessing cardiac autonomic dysfunction.(15) Deterioration was found in the HRR indexes of adult patients with FMF compared to healthy individuals in recent studies that Ardic(5) and Canpolat et al.(6) conducted. Contrary to these studies, Sahin et al.(16) found no difference between groups in terms of HRR parameters in their study conducted on children patients. In our study, deterioration was found in the HRR1 value for children with FMF compared to the healthy control group. These controversial results between Sahin et al.(16) and our study may arise from the different clinical and genotypical characteristics of the patient populations. While M694V mutation prevalence was 17% in their study, it was 32% in our study group. Also, the mean age of our patients was higher than in Sahin’s study group.

Cardiovascular complications contribute to the morbidity and mortality rates in rheumatologic and autoinflammatory diseases. An insufficient reduction in heart rate after exercise has been shown to be a marker of autonomic dysfunction.(17) In addition, it has been documented as an independent indicator of all mortalities caused by cardiovascular and other diseases.(18,19) This autonomic dysfunction, characterized by insufficient vagal reactivation besides excessive sympathetic activation, has been associated with FMF.(20,21) Moreover, deteriorated HRR at the first minute after exercise is a powerful marker of mortality, independent from the increased workload of the heart during exercise, and myocardial perfusion defects.(22)

Changes in SBPR have been proposed to be associated with sympathetic and parasympathetic activity, systemic vascular resistance, and baroreflex sensitivity. A decreased SBP ratio after exercise has been considered to be a reflection of the physical activity and general health of an individual. A greater decrease in SBP in the recovery period after peak exercise reflects that the individual’s physical activity and aerobic capacity are good. This response occurs as a result of a reduction in systemic vascular resistance because exercise improves vascular endothelial function and vasodilator capability.(23-27)

In several recent studies, markers indicating endothelial damage, such as thrombomodulin, adrenomedullin, and nitrite, have been found to be high in FMF patients in the non-attack period as well.(28,29) This finding proposes that ongoing subclinical inflammation and endothelial dysfunction are present also in the non-attack period in patients, and this is associated with increased cardiovascular problems.(30) We think that endothelial and autonomic dysfunction, together with subclinical inflammation, are responsible for a significantly higher SBPR1 value in FMF patients compared to the control group.

Although insufficient HRR and autonomic dysfunction are well known, there has been limited information demonstrating the relationship between SBPR and the autonomic nervous system.(31) Therefore, the demonstration of an insufficient SBPR1 response for the first time in FMF patients might be significant for indicating autonomic and endothelial dysfunction, which has been shown to be associated with FMF pathophysiology.

The exercise capacities of the patient and control groups were good. No significant difference was found in terms of exercise capacity, initial heart rate, and peak heart rate. Therefore, we suggest that insufficiency in HRR and SBPR developed due to autonomic and endothelial dysfunction.

One of the limitations of this study was the limited number of patients. In addition, we do not know the exact effect of FMF SBPR. Therefore, further studies are necessary to identify SBPR correctly after exercise stress tests in patients with FMF.

In conclusion, to our knowledge, this is the first study indicating SBPR impairment and its relationship to the HRR of patients with FMF. Cardiac involvement may occur in FMF patients without cardiovascular symptoms. FMF is associated with insufficient SBPR and delayed HRR after exercise. In our opinion, insufficient SBPR and decreased HRR response may indicate increased cardiovascular risk in these patients despite normal exercise stress tests. Further studies are necessary to demonstrate the clinical findings of deteriorated autonomic and endothelial dysfunction in FMF patients, and to explain the exact underlying pathophysiological mechanisms in autoinflammatory diseases.