Posterior reversible encephalopathy syndrome is a clinico-radiological syndrome with numerous entities including hypertension, preeclampsia/ eclampsia, renal dysfunction, cytotoxic drugs, systemic infections, and autoimmune diseases. It is a rare happening in patients with autoimmune disease. In this article, we report a case of an elderly female patient having the syndrome, meanwhile, also diagnosed with systemic lupus erythematosus, Sjögren syndrome, and primary biliary cirrhosis.

Posterior reversible encephalopathy syndrome (PRES) is known as reversible posterior leukoencephalopathy syndrome, primarily portrayed in 1996.(1) It is characterized by headache, vomiting, seizure, confusion, and visual disturbance. The brain magnetic resonance imaging is the diagnostic gold standard showing edema in the white matter of bilateral temporal, parietal, and occipital lobes for neuroradiologic characteristics, totally reversible.(2) To our knowledge, this is the first report of an elderly female patient of PRES complicated with systemic lupus erythematosus (SLE), Sjögren syndrome (SS), and primary biliary cirrhosis (PBC).

A 65-year-old female patient was admitted because of upper extremity shaking and lower extremity weakness for one day, fatigue, and anorexia for more than two months. She was firstly suspected of Parkinsonian syndrome. Levodopa and benserazide hydrochloride tablets were administered. However, her condition deteriorated aggressively, and it was hard for her to walk. Meanwhile, there were no complaints of rash, oral ulcer, baldness, arthritis, or photosensitivity. She denied headache, dizziness, vomiting, confusion, or double vision. Interestingly, she suffered from dry mouth and dry eyes for several months. She had never smoked or consumed alcohol, or received any suspected drugs. Physical examination was significant for fractured teeth and decreased myodynamia with 4/5 strength of upper extremity and 2/5 strength of lower extremity symmetrically. Laboratory tests revealed elevation of the 24-hour urine protein (1.20 g), positive autoantibodies (antinuclear antibody, anti- Smith, anti-double stranded deoxyribonucleic acid antibody) and decreased complement. SLE was diagnosed.(3) The positive tests of anti-Sjögren syndrome A antibody and Schirmer test, ocular staining score (>3) combined with clinical symptoms supported the diagnosis of SS,(4) but the patient refused labial salivary gland biopsy. Furthermore, PBC was diagnosed according to her raised alkaline phosphatase and positive serum anti-mitochondrial antibodies, excluding other causes of cholestasis. However, she rejected liver biopsy. Magnetic resonance imaging of the brain revealed symmetrically patchy lesion involving predominantly the subcortical white matter of the bilateral temporal and occipital (Figure 1). Therefore, she was ultimately diagnosed with PRES, SLE, SS, and PBC. Treatment was initiated immediately, including methylprednisolone 80 mg once a day, cyclophosphamide 400 mg∞3 days, plasmapheresis, and hypotensor. Several days later, her clinical symptoms improved greatly. Repeated magnetic resonance imaging was performed two months later, showing that the lesion had almost disappeared. Urinary protein proved to be 0.06 g/24 hour in follow-up. A written informed consent was obtained from the patient. 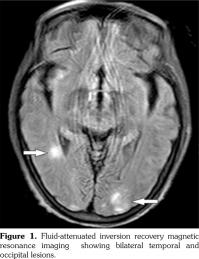 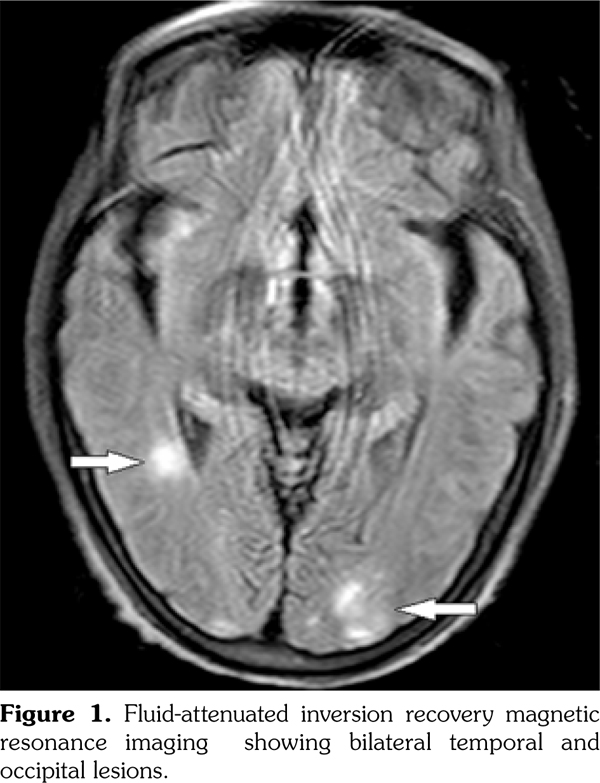 Compared to SS and PBC, PRES in SLE patients is relatively frequent. Younger age is independently associated with PRES episodes in patients with SLE and the mean±standard deviation age (years) is 27.9±1.1.(5) However, our patient was older. Besides, the lesion was different from conventional lupus encephalopathy, which frequently occurs in frontal lobe and parietal lobe. The underlying pathophysiology of PRES complicated with autoimmune diseases are as follows: theories including dysfunction of autoregulatory cerebral perfusion mechanisms and endothelia, inflammasome activation of interleukin-18 and neutrophil extracellular trap formation and the presence of autoantibodies (N-methyl-D-aspartate receptor and anti- aquaporin 4) were studied.(6-9) Recent genome- wide studies have pointed out that risk loci, such as interferon regulatory factor 5-transportin-3 may be associated with the genetic susceptibility to both SLE and PBC.(10) Osteopontin, recognized as one of the spontaneous autoimmune models of SLE, may also be related.(11) Although the majority of patients have active disease and are on immunosuppressive therapy prior to developing PRES, they still require an increase or continuation of their immunosuppressive therapy to control disease activity after the onset of PRES.

In conclusion, this is the first report to highlight the case of an elderly female patient who presented with an atypical symptom of PRES as the onset-symptom of SLE, SS, and PBC. Her signs recovered with prompt immunosuppressive, symptomatic, and supportive treatment, crucial to prevent ischemia/infarction and permanent neurological deficits.