Objectives: This study aims to investigate the genetic association between single nucleotide mutation in mitochondrial manganese superoxide dismutase and a Behçet’s disease (BD) population by using molecular techniques.
Patients and methods: Ninety-three BD patients (45 males, 48 females; mean age 33.15±8.99 years; range 17 to 65 years) and 125 controls (58 males, 67 females; mean age 28.33±7.31 years; range 18 to 62 years) were genotyped by polymerase chain reaction-restriction fragment length polymorphism method. The genotypic distributions in BD patients and controls were consistent with the Hardy-Weinberg equilibrium.
Results: Significant differences were observed between BD patients and controls in terms of genotypic distribution. Frequencies of alanine (Ala)/Ala, Ala/valine (Val), and Val/Val were 14.0% (n=13), 45.2% (n=42), and 40.9% (n=38) in BD patients and 21.6% (n=27), 53.6% (n=67), and 24.8% (n=31) in controls, respectively (p=0.033).
Conclusion: The Val/Val genotype of the manganese superoxide dismutase gene is associated with the physiopathology of BD in a group of Turkish patients.

Behçet’s disease (BD) is a chronic, multi-systemic, relapsing, and inflammatory disorder characterized by ocular manifestations, in particular.(1) It is also characterized by uveitis, recurrent oral ulceration, genital ulceration, and skin lesions. BD exists worldwide, but it is relatively more widespread in Middle Eastern and East Asian countries including Japan.(2) The effect of autoimmune response and genetic factors on etiology of BD was well established.(2) However, the etiologic mechanisms underlying this vascular disease have not been well understood yet. Reactive oxygen species (ROS) have been hypothesized to play an important role in BD. Evidence from several studies suggests that neutrophils from patients with BD generate high levels of ROS and then this stress causes endothelial cell lysis in vitro.(3-5) On the other hand, different data reported in the literature show a variation for the activities of antioxidant enzymes in BD: erythrocyte superoxide dismutase (SOD) activity was found to be increased,(4,6,7) unchanged,(8) and decreased,(5,9) glutathione reductase activity was found to be increased,(7) catalase, glutathione reductase and glutathione peroxidase (GPx) activities were found to be decreased,(5-9) and ultimately, erythrocyte catalase activity was found to be unchanged(4) in BD patients.

Superoxide dismutase is an enzyme catalyzing the dismutation reaction of superoxide radicals to hydrogen peroxide.(10,11) SOD, a key antioxidant enzyme, is a family of enzymes, comprising copper, zink-SOD, manganese (Mn)-SOD, and extracellular SOD, whose function is protection against ROS.(2,12) Mn-SOD gene is located on chromosome 6q25 in mitochondria and it consists of five exons. Valine-to-alanine (Val-to-Ala) substitution at codon 16 of human Mn-SOD might lead to misdirected intracellular trafficking followed by changes in Mn-SOD activity in the mitochondria.(2,13,14) In this study, we aimed to investigate the genetic association between single nucleotide mutation in mitochondrial Mn-SOD and a BD population by using molecular techniques. 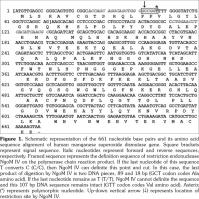 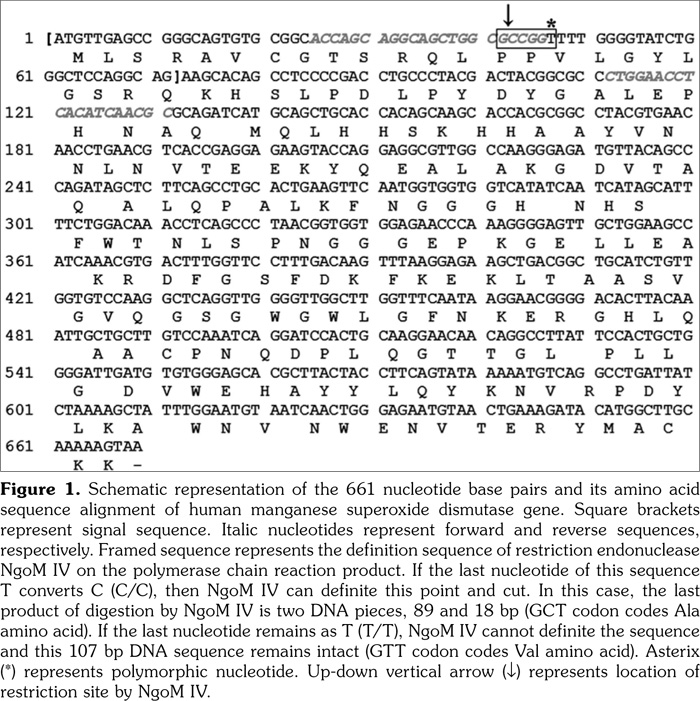 Statistical analysis
Allele and genotype frequencies between BD patients and controls were compared by Chi-square test using the SPSS for Windows version 16.0 software program (SPSS Inc., Chicago, IL, USA). Allele frequencies were calculated by Internet based Pop-Gen 3.2 software. Differences in the demographic characteristics of patients were assessed among the three Mn-SOD genotypes using one-way analyses of variance (ANOVA). The Chi-square test was used to compare the distribution of genotypes and allele frequencies for deviations from Hardy-Weinberg equilibrium.

Analysis results showed that maximum cleavage site was between position 18 and 19 (Figure 1).

When restriction amplification region had band sizes of 89 bp and 18 bp, this genotype was called homozygote (Val/Val). When restriction resulted in band sizes of 107 bp, 89 bp, and 18 bp, this genotype was called heterozygote (Ala/Val). The allele and genotype frequencies of the subjects for the Ala-9Val Mn-SOD polymorphism were shown in Table 1. If the -9 codon was GCT (Ala), then digestion with NgoM IV produced two DNA fragments, 89 and 18 bp in length. If codon was GTT (Val), the amplified product was not digested with NgoM IV and remained as a whole 107 bp DNA fragment. Genotype of Ala-9Val polymorphism in BD and control groups were shown in Table 1. The genotype distributions of BD and control groups were within the Hardy-Weinberg equilibrium. There was no sex or age-dependent difference between the groups. Significant difference was found in genotype frequencies between BD and control groups (X(2)=6.793, df=2, p=0.033). The frequency of Val-9 was more common both in BD patients and controls. No significant difference was found in allele frequencies between BD patients and controls (Table 1, Figure 2). 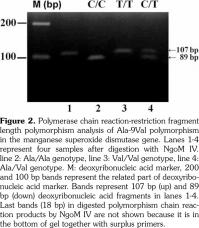 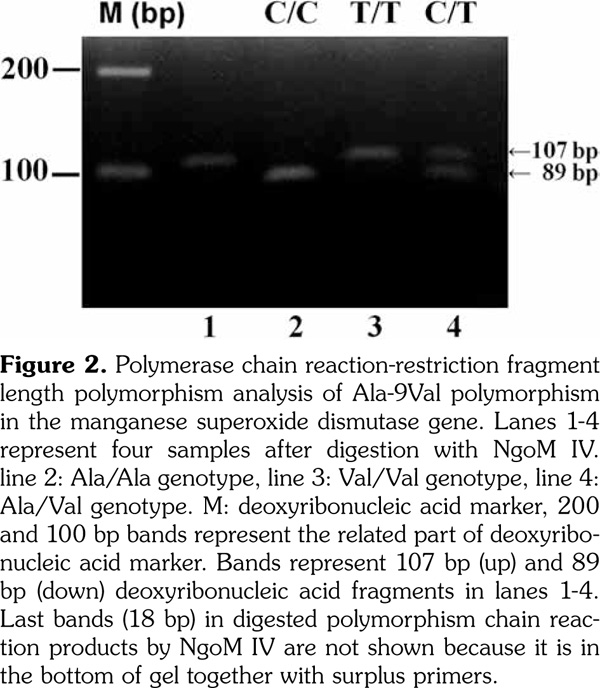 Proteins secreted out of the cell generally contain an intrinsic signal that governs their passage across membranes and cell walls. Specific amino acid sequences determine whether a protein will pass through a membrane, become integrated into the membrane, or be exported out of the cell. These signal sequences are present either as a short tail at one end of the protein or sometimes located within the protein. The method program is available under the prediction server page of Center for Biological Sequence analysis http://www.cbs.dtu.dk/services/SignalP/). SignalP looks at charge distribution and a unique composition of the hydrophobic region.

It is known that Mn-SOD gene is polymorphic.(13) We identified a significant association between development of BD disease and Mn-SOD Val- 9Ala polymorphism. The Val/Val genotype of the Mn-SOD gene can be a novel genetic marker of risk factor for BD in Turkish people. Our results were similar to those of Nakao et al.,(2) who showed a significant difference in the allele and genotype frequencies of the Mn-SOD Ala16Val polymorphism between BD patients and control subjects in Japan. On the other hand, Yen et al.(19) found no significant difference in the frequencies of Mn-SOD gene polymorphisms between BD patients and controls in Taiwan.

Many studies were carried out on Mn-SOD polymorphisms in various diseases. While some of these studies report a significant similarity between polymorphisms in patients and controls, some does not. Cox et al.(20) reported that Mn-SOD gene was associated with an increased risk of breast cancer. Whereas Lightfoot et al.(21) suggested that no association was observed between Val16Ala and total non-Hodgkin’s lymphoma, diffuse large-B cell lymphoma or follicular lymphoma in the UK and USA. Akyol et al.(18) suggested that when the patients with schizophrenia were divided into three subgroups as disorganized, paranoid and residual, there was a significant difference in Mn-SOD genotypic distribution among the subgroups. It has been shown that SOD Ala-16Val polymorphism is an age-dependent modulator of oxidized low-density lipoprotein cholesterol levels in middle-aged males and elderly females.(22) The Ala-9Val polymorphism in the mitochondrial targeting sequence of the Mn-SOD gene is not associated with juvenile-onset asthma in Turkish population.(23) The Ala-9Val polymorphisms in the mitochondrial targeting sequence may influence the efficiency of Mn-SOD transport into mitochondria.(18) It has been shown that Mn-SOD genotypes containing the variant A allele were found to be associated with a 1.5-fold increased risk of breast cancer compared with those with the homozygous wild-type genotype (Mn-SOD V V ).(17)

Taysi et al.(7) found that erythrocyte SOD activities were increased in BD compared to healthy controls whereas the other antioxidant enzymes, glutathione S transferase, catalase, and GPx were decreased. In another study, which investigated the oxidant-antioxidant status in whole blood from BD and controls, GPx was found to be decreased similarly to the previous paper.(8) Aydin et al.(24) found increased malondialdehyde levels, decreased GPx activity and non-significant changes in SOD activity in the serum of the patients. SOD activity was demonstrated to be increased in erythrocyte from BD patients in another study.(4) All of the above-mentioned studies suggest that there is a changing pattern of oxidative stress and antioxidant system in BD and antioxidant system in plasma, erythrocyte, and other body fluids and cells have been commonly declined. This is important because there is huge amount of oxidative stress parameters which were produced by different metabolic processes in physiological metabolism of the body that need to be scavenged by SOD and other antioxidant enzymes.(25-27) Therefore, we aimed to show the genetic clues and supporting data on this topic.

Nakao et al.(2) investigated the association of Mn-SOD and extracellular SOD gene polymorphism as well as endothelial and inducible nitric oxide synthase genes with susceptibility to BD in Japan. They found increased Mn-SOD Val16 frequencies in patients with BD. They alleged that Mn-SOD V/V genotype and human leukocyte antigen-B*5101 had a synergistic role in controlling susceptibility to BD. There were no significant differences in the frequencies of extracellular SOD gene polymorphism (Arg213Gly) as well as nitric oxide synthase gene polymorphism between patients and controls.(2) Our results conform with results of this study and give us some important clues about the underlying mechanism of BD in relation to oxidative stress. Another research on the same topic from Taiwan reported no significant difference in the allele and genotype frequencies of the Mn-SOD Ala/Val polymorphism between BD and control.(19) These differences between the studies might be originated from the racial and ethnic differences for the related genes.

Valine to alanine substitution may increase the targeting efficiency by a conformational change of the targeting sequence, consequently leading to increased mitochondrial ROS scavenging capability.(28) The presence of more than one signal sequence for this enzyme suggests a combinatorial mechanism determining the rates of targeting, membrane translocation and/or signal sequence cleavage with concomitant folding of Mn-SOD.(13) Sutton et al.(29) showed that the Ala-Mn-SOD/mitochondrial targeting sequence allows efficient Mn-SOD import into the mitochondrial matrix, while the Val-variant causes partial arrest of the precursor within the inner membrane and decreased formation of the active Mn-SOD tetramer in the mitochondrial matrix. In conclusion, the results of this study suggest that the Val/Val genotype of the Mn-SOD gene is associated with the physiopathology of BD in a group of Turkish patients.