Evaluation of Sexual Dysfunction in Females With Ankylosing Spondylitis

Objectives: This study aims to evaluate sexual function in females with ankylosing spondylitis (AS), compare them with healthy controls, and demonstrate the effects of AS on female sexual functions.
Patients and methods: Fifty-four AS patients (mean age 39.33±8.57 years; range 20 to 55 years) and 56 similar aged healthy controls were included in the study. Depression levels and sexual functions of all participants were evaluated by the Beck Depression Inventory and Female Sexual Function Index (FSFI), respectively. Other assessment methods included the visual analog scale for pain, fatigue, and importance of sexual life; Bath Ankylosing Spondylitis Disease Activity Index for disease activity, Bath Ankylosing Spondylitis Functional Index for functionality, Bath Ankylosing Spondylitis Metrology Index for spinal mobility, and Short Form-36 (SF-36) for quality of life.
Results: Total FSFI and all FSFI subscale scores and number of weekly sexual intercourse were significantly lower while Beck Depression Inventory score was significantly higher in females with AS when compared to controls. In AS patients with depression, total FSFI score and FSFI subscales scores of desire and arousal were significantly lower than those without depression. In females with AS, there were negative correlations between total FSFI score and duration of complaint, Beck Depression Inventory score, Bath Ankylosing Spondylitis Metrology Index score, visual analog scale score, age, and duration of marriage while positive correlations existed between total FSFI score and visual analog scale importance of sexual life score and number of weekly sexual intercourse, SF-36 fatigue, SF-36 social function, SF-36 pain, and SF-36 mental component scores.
Conclusion: Sexual dysfunction was more common in female AS patients without marked impairment in body image and hip involvement when compared to normal population. Sexual problems which are generally neglected should be handled regardless of disease activity when evaluating patients with AS and establishing a treatment plan.

Ankylosing spondylitis (AS) is a chronic, systemic inflammatory disease that primarily affects sacroiliac joints and spine. It causes limitation of movement, particularly in axial joints, due to afflicted periarticular structures. Although AS primarily involves axial skeleton, it also affects peripheral joints such as shoulder and hip joints. Patients may experience difficulty in daily activities due to limitations in musculoskeletal system.(1,2)

The patient and control groups were taken into a room where there was only a female doctor so that they could answer the questions without being shy. They were assured that their answers would be kept confidential. Only the questions not understood by participants were explained by paying attention not to affect their answers.

Beck Depression Inventory is a 21-item self- reported assessment scale evaluating depressive mood with shown reliability and validity. The items are rated from 0 to 3 according to severity of symptom. Higher BDI scores indicate more severe depression. BDI scores ≥17 indicate minimal to mild depression.(5,20,21)

All subjects in both patient and control groups were married. Both groups were comparable regarding age, BMI, educational level, occupational status, number of children, family structure, and duration of marriage (p>0.05) (Table 1). Mean duration of AS was 8.52±5.13 years. Table 1 presents BMI, VAS importance of sexual life scores, number of weekly sexual intercourse, and sores of BDI, BASDAI, BASFI, BASMI, and VAS. FSFI score and number of weekly sexual intercourse were significantly lower while BDI score was significantly higher in patient group compared to controls (p<0.001) (Table 1).

Table 1. Characteristics of patients with ankylosing spondylitis and controls
× 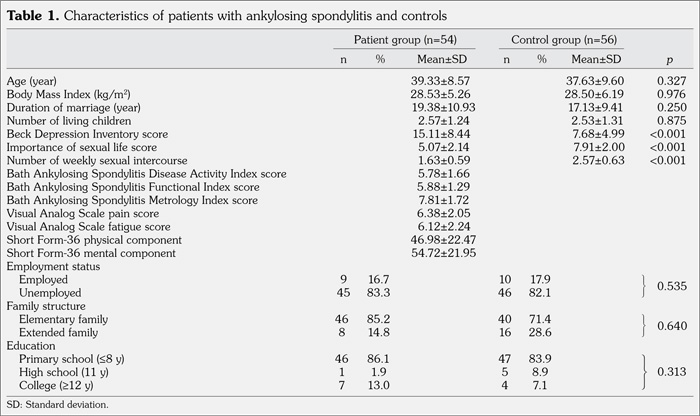 According to BDI score ≥17 was considered to be in favor of depressive mood, depression was detected in 44.4% of patient group and in 7.1% of controls. Total FSFI and all FSFI subscale scores (desire, arousal, orgasm, lubrication, satisfaction, pain) were significantly lower in patient group compared to controls (p<0.001) (Table 2). In AS patients with depression, total FSFI score and FSFI subscale scores of desire and arousal were significantly lower than those without depression (p<0.05) (Table 2).

Table 2. Assessment of female Sexual Function Index scores (total and sub-scales) according to depressive symptoms in patients with ankylosing spondylitis
× 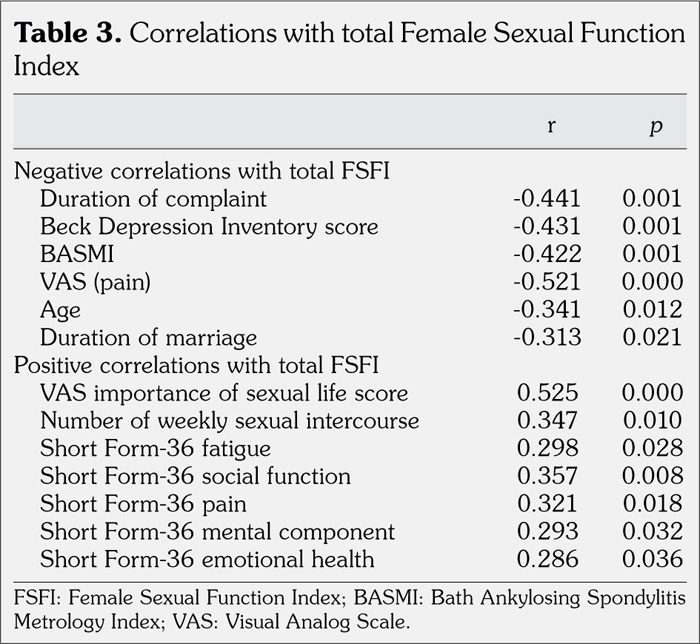 Sexual problems are quite common in females. It has been reported that approximately 40% of healthy females are affected by sexual problems.(24) In previous studies, sexual problems were more frequently observed in rheumatoid diseases accompanied by varying degrees of pain, limited movements, morning stiffness, concerns regarding partner's commitment, and deterioration of the body image. Thus, it has been concluded that sexual dysfunction may be seen in rheumatoid diseases such as AS with pain, limitation of movements, and negative effects on QoL.(6,24,25) However, studies on sexual problems in patients with AS are both limited and controversial.(26) In our study, sexual dysfunction was assessed by FSFI, which revealed that sexual dysfunction was higher in AS patients than controls.

It has been reported that 71% of AS patients experience sexual problems in three categories: medical, psychological, and social. While medical reasons can easily be recognized, psychological and social factors are often overlooked. In AS, physical and emotional disorders caused by the disease may lead to sexual dysfunction. Although Elst et al.(12) failed to demonstrate any difference in sexual function between AS patients and healthy volunteers, subsequent studies reported higher rates of sexual dysfunction in AS patients. It was also shown that sexual dysfunction was associated with joint range of motion limitations and depression.(13,27)

Depression affects sexual life significantly. As AS is a chronic and progressive disease, it may cause some psychiatric symptoms, the most common ones being anxiety and depression.(28) In our study, 44.4% of the patients were in depressive mood. Similarly, a great number of studies have shown a correlation between sexual dysfunction and depression in AS patients.(11,29,30) Therefore, we think that considering depression in the treatment of AS patients may not only improve patients’ psychological status but also improve their sexual function.

Furthermore, pain was shown to have negative effects on sexual function in females.(6,12,33-35) In various studies on rheumatoid disorders, it was reported that pain may decrease sexual desire, sexual satisfaction, and number of sexual intercourse. The fear of increasing pain may cause sexual intercourse avoidance and/or shorten duration of sexual intercourse.(12,36) In studies on female AS patients, pain was assessed as a disease activity rather than an individual parameter. However, in a study by Demir et al.,(31) in which pain was assessed as a distinct parameter, a correlation was found between pain and sexual dysfunction, while Sarıyıldız et al.[(30)] reported no such correlation. In our study, a correlation between VAS score and sexual dysfunction was detected. These findings suggest that effective pain control is important to improve sexual function in females with AS.

Pain or limitation caused by disease and sexual dysfunction may impact QoL negatively. In female AS patients, QoL is strongly correlated with sexual function.(37) There are limited numbers of studies evaluating the effects of QoL on sexual function in AS patients. In a study by Sarıyıldız et al.,(30) a correlation between sexual function and QoL was reported. Demir et al.(31) found that total FSFI scores were correlated with SF-36 subscales including general health, vitality, emotional role, and mental health. In our study, QoL was assessed with SF-36, and sexual dysfunction was shown to be correlated with mental component, social functioning, pain, fatigue, and mental health scores, whereas there was no correlation between physical component, physical functioning, physical role functioning, emotional role functioning, and general health scores. In some studies, a mild correlation was determined between sexual dysfunction and disease activity in male and female AS patients, while a strong correlation was found in others.(11,29,30)

Unlike the literature, we detected no correlation between sexual dysfunction and BASDAI, likely due to our small sample size excluding patients with extra articular involvement and arthritis. Thus, further studies with larger sample size are required on female AS patients for more definitive results.

Moreover, fatigue was reported to be more common in AS patients compared to controls(38) and affect sexual health negatively.(39) However, fatigue has many different forms; thus, discrimination may be challenging. Mental or physical fatigue may be reported despite lack of any underlying reason. It was reported that experience of fatigue varies with respect to age, sex, emotions, and daily roles. Nikolous et al.(40) showed that effects and experiences of fatigue vary individually. Particularly, young females with multiple daily roles have greater tendency to experience negative effects of fatigue.(41) In our study, no correlation was detected between fatigue level and sexual dysfunction. We think that this was due to the difficulty in determining fatigue levels as there are many parameters influencing fatigue.

Our study has several limitations including enrollment of subjects from a single center, not questioning whether patients’ partners had sexual dysfunction and problems/questions related with their sexual life, not questioning whether drugs known to affect sexual dysfunction (H receptor 2 antagonists, proton pump inhibitors) were used, and lack of assessment of QoL in control group. Also, patients were not questioned for any factors accompanying AS such as stiffness, sleep disorders, and those affecting sexual life such as body image, stress, coping abilities, sexual attractiveness, and skills of the partner which may influence sexual function.

In conclusion, we demonstrated that sexual dysfunction was more common in female AS patients without marked impairment in body image and hip involvement compared to normal population. Sexual dysfunction was correlated to pain, depressive mood and mobility, while uncorrelated to BASDAI which is a primary marker of disease activity. Thus, we think that depression and sexual problems which are generally neglected should be handled regardless of disease activity when evaluating patients with AS and establishing a treatment plan. In addition, further studies are needed for better understanding of sexual problems in female AS patients.