Objectives: This study aims to analyze the role of tumor necrosis factor-alpha -308 G>A polymorphism with susceptibility to rheumatoid arthritis (RA) in population of Punjab, Jammu and Kashmir.
Patients and methods: A total of 251 blood samples were collected comprising 131 samples from Punjab (cohort 1) (40 RA positive and 43 RA negative and 48 healthy controls) and 120 samples from Jammu and Kashmir (cohort 2) (44 RA positive, 36 RA negative and 40 controls). Genotyping was based on amplification refractory mutation system-polymerase chain reaction, followed by agarose gel electrophoresis.
Results: In both the cohorts, higher percentages of females were observed to be affected than males (67.8% in cohort 1 and 65% in cohort 2). The frequency of A-allele in cohort 1 and cohort 2 was 10.2% and 18.8% in cases, respectively, while it was 7.9% and 23.2% in controls, respectively. In cohort 2, sex-specific association in males with RA was observed, whereas no similar association was observed in cohort 1. Rheumatoid arthritis patients presented with lower values for profiles of adiposity, suggesting association of weight loss with progression of RA.
Conclusion: Tumor necrosis factor-alpha -308 G>A polymorphism does not seem to play a significant role in predisposition to RA in North Indian population of Punjab, Jammu, and Kashmir.

Rheumatoid arthritis (RA) is a chronic autoimmune disease that affects 1% of the population worldwide.(1) It is a systemic disease which involves the organs, joints, and other areas of body such as the eyes, lungs, heart, kidney, spleen, and skin.(2) RA exhibits multifactorial inheritance resulting from a complex interplay between an individual’s genetic background and environment.(3) It has a complex etiology, including a wide spectrum of clinical manifestations, variability in disease severity, progression, and response to therapies.(4) The genetic clues indicating RA were demonstrated in twin studies which show higher concordance rate for monozygotic twins (15%) than dizygotic twins (4%) with higher prevalence in first degree relatives (4.38%) than second degree relatives (1.95%).(5) Extensive pathogenetic studies have shown that insults in both innate and adaptive immune response are involved in the pathogenesis of RA.(6) Immune response mediated in RA patients shows both type III (immune complex mediated) and type IV (T cell-mediated) hypersensitivity.(2,7) Over expression of proinflammatory and anti-inflammatory cytokines such as tumor necrosis factor-alpha (TNF-α), interleukins and interferons have been observed in serum of RA patients. It has been suggested that the altered expression of these cytokines leads to complex immune cascade causing tissue injury and inflammation.(8,9)

Tumor necrosis factor-alpha is a potent proinflammatory and immunoregulatory cytokine. TNF-α has a broad spectrum of biological activities with diverse functions in humans including induction of apoptosis, regulation of lymphocyte proliferation, upregulation of proteolytic enzymes, chemokines, and pathogenesis of wide range of complex diseases including RA.10 The gene encoding TNF-α is located within the highly polymorphic major histocompatibility complex region on chromosome 6p21.3.(11) Elevated protein levels of TNF-α have been reported in synovial fluid and synovial tissue of RA patients.(12) Expression analysis in a transgenic mouse model revealed that over expression of TNF-α leads to development of chronic arthritis resembling RA.(13) Genetic variations like microsatellites and single nucleotide polymorphisms (SNPs) in the regulatory and functional regions of TNF-α gene are known to dictate the levels of the protein. Genetic polymorphism at -308 guanine>adenine (G>A) in the promoter region has also been reported to influence TNF-α protein levels.(14,15) Several studies have shown the association of -308 G>A transition with RA.(14-21) Keeping in view the role of inflammatory pathway in pathogenesis of RA and the influence of promoter polymorphisms in defining the protein levels and hence the disease susceptibility, the present study aims to analyze the association of TNF-α -308 promoter polymorphism in RA patients from Punjab, Jammu, and Kashmir.

This is a case-control association study of which its design has been approved by the ethics committee of Guru Nanak Dev University. A total of 251 blood samples were collected from two North Indian states, comprising 131 samples (95 females; mean age 46.85±12.52; range 25 to 74 years and 36 males; mean age 42.05±12.64; range 25 to 65 years) from Punjab (cohort 1), and 120 samples (80 females; mean age 44.43±13.58; range 30 to 75 and 40 males; mean age 47.75±12.27; range 28 to 76 years) from Jammu and Kashmir (cohort 2). Samples from Punjab were collected from government and private hospitals including individuals from Amritsar, Gurdaspur, Jallandhar, and Ludhiana regions. Samples collected from hospitals of Jammu had individuals from Jammu as well as Kashmir. Samples from Punjab included 83 patients with RA (40 RA positive and 43 RA negative) and 48 healthy controls. Samples from Jammu and Kashmir constituted 80 patients with RA (44 RA positive and 36 RA negative), and 40 controls without RA. Patients with RA were divided into RA positive and RA negative according to the presence of rheumatoid factor (RF). Inclusion criteria included individuals clinically diagnosed as having RA by expert physicians according to the revised criteria of American College of Rheumatology.(22) Individuals with no history of joint pains were enrolled as healthy controls, and matched for age and ethnicity with patients of RA. After obtaining their informed consent in writing, 3-5 ml venous blood was drawn with sterile syringe, and immediately transferred into a pre-labelled blood collection vial containing anticoagulant (0.5 M EDTA). Other information about each donor such as age, sex and anthropometric measurements comprising of height, weight, waist circumference (WC) and hip circumference (HC) were recorded on donor documentation form for further analysis viz calculating the body mass index and waist hip ratio (WHR).

Statistical analysis
The continuous variables are represented as mean value ± standard deviation (SD). Body mass index is given as kg/m2, and WC and HC in cm. Body mass index cut off values used for overweight and obese were as recommended for the Asian Indians (body mass index ≥23).(26) Genotypes and allele frequencies are represented as percentages and the frequencies were calculated by gene counting method. The distribution of genotype [guanine-guanine (GG), guanine-adenine (GA), adenine-adenine (AA)] and allele (G and A) frequencies in patients with RA and control was compared by 3x2 and 2x2 Chi-square contingency tables, and extent of association was detected by odds ratio (OR) at 95% confidence interval (CI). Significance was detected at 5% level (p<0.05). The statistical analyses were performed using IBM SPSS Statistics for Windows, version 20.0 (IBM Corp., Armonk, New York, USA).

Various clinical characteristics of the patients and controls is shown in (Table 1). The results of the two populations are represented separately.

Table 1. Comparison of clinical characteristics of rheumatoid arthritis patients and controls from the populations of Punjab; and Jammu and Kashmir
×

The TNF-α -308 G>A polymorphism was analyzed in RA patients with amplification refractory mutation system-polymerase chain reaction technique. The distribution of genotype and allele frequencies in overall and sex-specific RA patients (RA positive and RA negative) and controls in cohort 1 and cohort 2 are represented in Table 2. The patients and controls in both cohorts were within Hardy- Weinberg equilibrium. 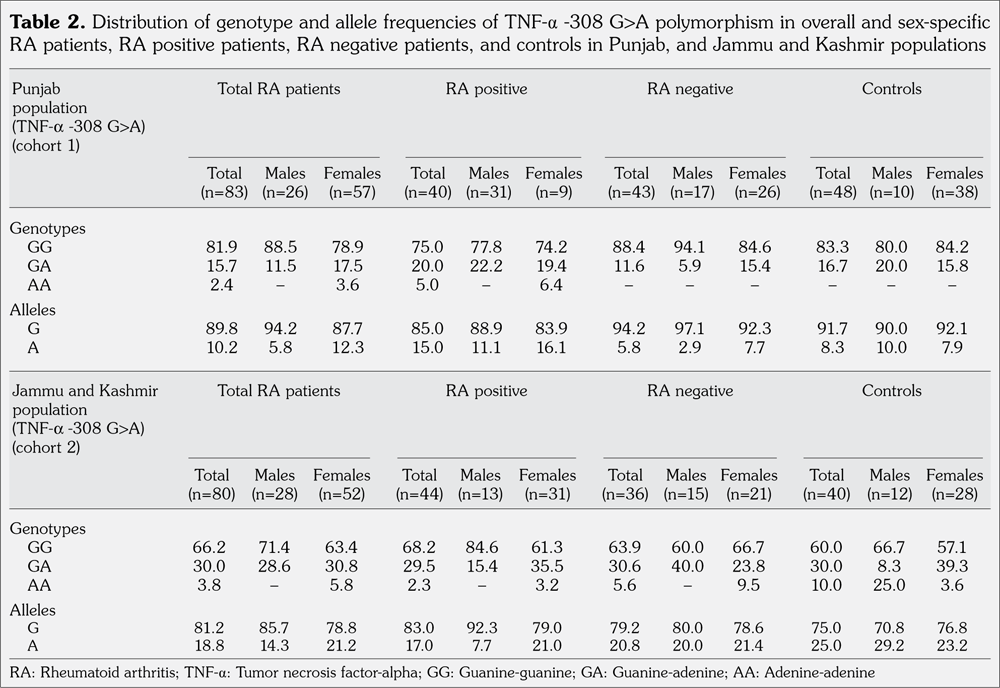 Table 3. P values and odds ratio observed in comparison of genotype and allele frequencies between different groups of patients and controls of cohort 1 (Punjab) and cohort 2 (Jammu and Kashmir)
× 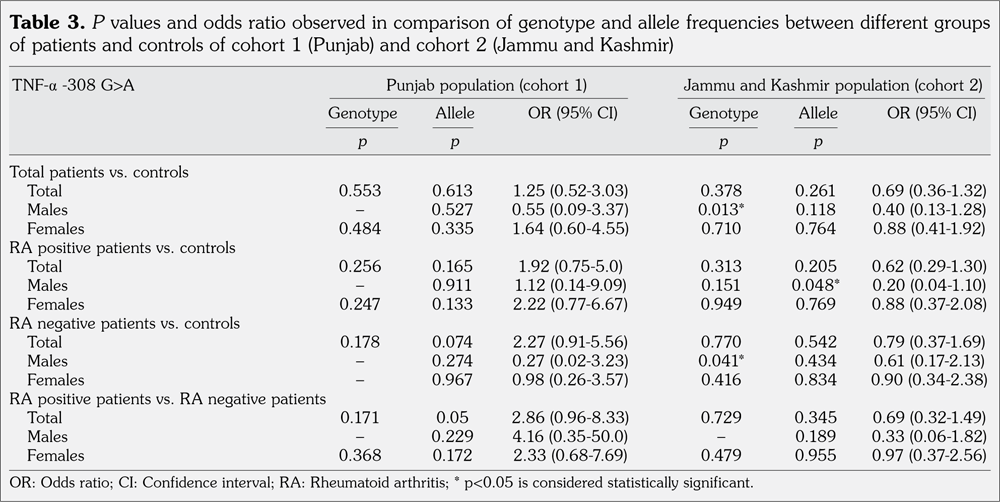 Tumor necrosis factor-alpha plays a prominent role in inflammation, and has relevance to infectious and autoimmune diseases like RA.(6) TNF-α production shows a wide variation with high and low producer phenotypes which led to great interest in both the regulation of the TNF-α gene, and the possible association of its variants with RA pathology.(13) Several polymorphisms have been studied in the promoter region of TNF-α gene of which G>A substitution at -308 position was one of the most extensively investigated variant.(27,28) Many studies have suggested the functional implication of -308 G>A polymorphism with higher levels of TNF-α transcription.(29-31) 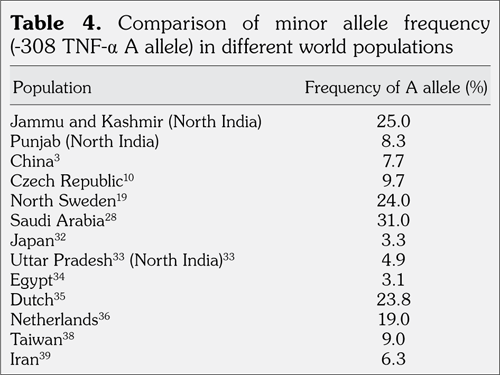 In both population groups, females were more affected than males (65% in Jammu and Kashmir, and 68.7% in Punjab). This finding was in line with other studies from populations of France, America, Taiwan and Netherlands which have also reported higher percentage of female RA patients (78%, 75.7%, 75.4%, and 73.5%, respectively).(36,38-40) The results implied that sex may have a significant effect on susceptibility to RA, with the disease being three times more frequent in females than in males. Moreover, it has been reported that hypoandrogenicity is responsible for RA in younger women.(41) Estrogen produced in females may lead to enhanced antibody production, whereas antibody production is suppressed by androgen in males, causing the sex-specific differences in RA.(42,43) In the population of Jammu and Kashmir, significant association of TNF-α -308 genotypes was found in total RA males cases and RA negative cases while marginal association was observed in RA positive cases and -308 alleles, suggesting a sex specific association of TNF-α -308 G>A polymorphism in this population. (Table 3). However, further studies on a larger sample size are required to confirm these findings.

Body mass index was higher in the population of Punjab while the WC was higher in Jammu and Kashmir population suggesting higher prevalence of generalized obesity in Punjab region, and central adiposity in the population of Jammu and Kashmir. The differences are indicative of increasing prevalence of central obesity in population of Jammu and Kashmir; however, analysis on a larger sample size is required to confirm the findings. Results of the present study contradict other studies from Punjab and national family health survey-3 report, which suggest higher prevalence of generalized as well as central obesity in the population of Punjab.(44,45) In both cohorts, the RA patients had lower values for obesity profile than the controls. The differences may be a result of the selection of patients, as the present study is based on RA patients. Furthermore, most RA patients are advised weight control by doctors as excess weight may worsen their condition. Normally, weight loss is associated with the progression of RA. Additionally, TNF-α has been associated with accelerated metabolism, muscle protein breakdown, and muscle atrophy. Therefore, increased levels of this cytokine may eventually lead to weight loss.(46,47)

The role of TNF-α -308 G>A promoter polymorphism in RA susceptibility has been investigated in various populations yielding contradictory results. Some studies have reported a positive association of TNF-α -308 alleles with RA(3,16,31-34) while others have reported lack of association with RA.(36,48-52) In conformity with the majority of previous studies, the present study failed to demonstrate any association between the TNF-α -308 G>A promoter polymorphism and RA in cohort 1. Interestingly, the comparison between RA patients who were RF positive and RF negative revealed a marginally significant difference in the allele frequencies (p=0.05, OR=2.86, 0.96-8.52 at 95% CI). The frequency of the A allele was higher in RA positive patients (15% vs. 5.8%, respectively). It appears that the presence of A allele in RA positive patients may increase susceptibility to RA in cohort 1 i.e. the population of Punjab. However, this finding needs to be confirmed with a larger sample size. Moreover, no association was shown between TNF-α -308 G>A promoter polymorphism with susceptibility to RA in overall patients and controls in cohort 2. However, the association of genotypic frequencies and marginal association of allele frequencies in males suggested a sexspecific association between TNF-α -308 G>A polymorphism with RA in Jammu and Kashmir population. If these sex-specific differences can be replicated, it might be considered an important susceptibility factor in male patients.(53) Presence of AA genotype in only females reflects a trend towards the sex-specific effect of the genotype with RA. However, no statistical significance was detected for females in both cohorts. Thus analysis on larger sample sizes is required to ascertain any sex-specific association. The association between the TNF-α -308 G>A polymorphism and RA can be explained in many ways as it is located in the regulatory region of TNF-α gene where the secretion of TNF-α is regulated. Still, the role of polymorphism in both North Indian populations needs to be analyzed on a larger sample size.

Acknowledgements
The financial assistance to Priyanka Raina and Priyanka by the Punjab State Council for Science and Technology is duly acknowledged. The assistance of Dr. Bella Mahajan, Head, Department of Microbiology, Government Medical College, Jammu in sample collection is also humbly acknowledged.

The financial assistance to Priyanka Raina and Priyanka by the Punjab State Council for Science and Technology is duly acknowledged.