Tophaceous gout which typically develops following recurrent acute attacks, accounts for 10% of all gout cases. Although gout is known as a condition which primarily affects male gender, 5% of the patients are women with the majority being postmenopausal during the first attack. Tophaceous gout is frequently polyarticular in women. A solitary tophus which is seen as a soft tissue mass without inflammatory joint disease can be confused with neoplastic conditions. In this article, we report a 30-year-old female case of tophaceous gout with atypical localization presenting without hyperuricemia or an acute inflammatory gout attack.

Gout has been known since ancient times and was known as “gutta” in the middle ages. Rodnan and Schumacher[1] reported that the first case report was published in 1876 by Garrod. Gout is a uric acid metabolic disorder which is seen throughout the world and is characterized by recurrent episodes of inflammatory arthritis[2] along with the accumulation of monosodium urate monohydrate (MSU) crystals in soft tissues and diarthrosis. It usually begins as self-limited attacks of acute inflammatory arthritis, but the long-standing hyperuricemia causes erosive polyarthritis and chronic tophaceous forms of the disease in some patients.[3] In rare instances the disease may initially emerge as gouty tophi,[4] but this condition only develops in 10% of patients.[5]

Gout affects more than 1% of the population and is a widespread cause of inflammatory arthritis, affecting one or more joints in men over the age of 40.[6] It is known as a man's disease, as it occurs four times more often in men below the age of 65 than in women.[7] Gout is rarely seen in premenopausal women.[8] Infact, females account for only 5% of the total cases, and 90% of these occur in the postmenopausal period during the first attack.[9]

In this report, we present a case of tophaceous gout in the third metacarpophalangeal joint of a female patient with normal levels of plasma uric acid and no history of acute gout attack.

A 30-year-old female patient came to our clinic complaining of pain and swelling in the third metacarpophalangeal joint of the right hand. She described a slowly growing mass and progressively increasing pain in this joint, especially when she made a fist. A semi-rigid, fixed mass of approximately 2.5x1 cm in size was palpated in the physical examination of the patient, but there was no redness or feeling of heat emanating from it. Hand functions, such as grasping or holding, along with finger mobility were within normal limits. In addition, the patient had no other systemic symptoms or findings of arthritis such as fever, arthralgia, or swelling in the joint. A mass composed of calcium deposits was present in the third metacarpophalangeal joint of the right hand in the X-ray radiographs (Figure 1). The patient's medical history revealed nothing of consequence, and the plasma uric acid level and other routine preoperative blood tests were within normal limits, except for a slightly elevated level of the plasma pseudocholinesterase enzyme activity. While the mass lesion was dissected from the surrounding soft tissues, a milky fluid was discharged, A 2.5x1x0.5 cm size rubbery mass with a rigid center was then removed (Figure 2). Amorphous monosodium urate crystal bands surrounded by macrophages, lymphocytes, and multinuclear giant cells together with fibroblastic proliferation associated with tophaceous gout were encountered under polarized light in the histopathological examination of the removed mass (Figure 3). A detailed physical examination along with more laboratory tests and radiographs were performed after the histopathological diagnosis, and all were normal. After a one-year follow-up, the patient's plasma uric acid levels were still within the normal limits, and there had been no acute attack of arthritis. The patient was free of pain, and her hand functions were satisfactory. 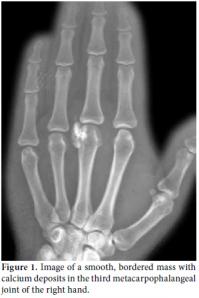 Figure 1. Image of a smooth, bordered mass with calcium deposits in the third metacarpophalangeal joint of the right hand.
× 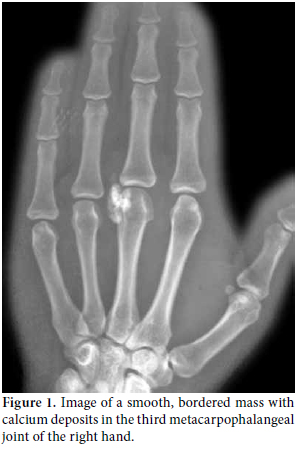 Figure 2. Macroscopic view of the mass (a) intraoperatively and (b) after the excision.
× 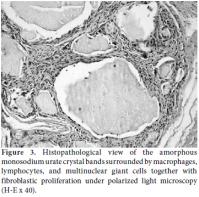 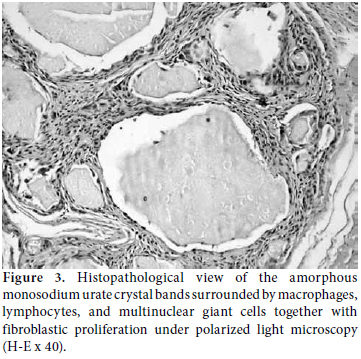 Although hyperuricemia occurs in many patients with acute arthritis, which is indicated by a serum uric acid level >6.8 mg/dl, this level may occasionally be normal during the attacks. In addition, patients with hyperuricemia may sometimes be asymptomatic.[2,10-12] For example, the serum uric acid level in our case was normal in both the operative and postoperative controls.

Systemic symptoms and diagnoses such as cold, fever, and fatigue may accompany acute arthritis, and initial gout arthritis attacks frequently begin at night. Because water is absorbed faster than urate, the amount of MSU crystals and the urate concentration in the joint increase in the synovial fluid, thus causing the attacks.[13] Gouty tophi can develop following recurrent acute gout attacks that have lasted for more than 10 years and may be the first symptom of the disease.[14]

The presence of MSU crystals in the tophus or synovial liquid continues to be the gold standard for gout diagnosis. Other data can also lend support to the diagnosis, including a typical clinical history, sudden, violent acute joint pain, frequent classic first metatarsophalangeal joint involvement, underlying renal disease, a history or use of medicine causing hyperuricemia, high serum urate levels, radiological evidence supporting gout arthritis, and a positive response to topical cold administration or colchicine treatment.[10,13]

Poorly controlled gout may progress to the chronic phase over time, and the accumulation of MSU crystal deposits in the joints, soft tissues, and ligaments (tophi) may cause painful polyarticular arthritis attacks with acute inflammation.[15,16] Tophi may be found in any location, but the first metatarsophalangeal joint is usually affected.[2] The earlobe, hand and wrist, foot and ankle, knee, elbow, olecranon bursa, and Achilles' tendon are also common sites.[2,13,17] However, it is rarely seen in the carpal tunnel,[18] subconjunctival sclera,[19] or cardiac valves.[20] The initial attack is usually monoarticular in men,[2] and polyarticular in women.[21] Our case involved a young woman with monoarticular involvement who had no history of acute inflammatory arthritis attacks.

Gout should be kept in mind in the differential diagnosis of acute monoarticular arthritis,[4] but it often not suspected until surgery.[13] The clinical, radiological, and laboratory examinations are helpful for the diagnosis if a histopathological analysis was not done.[13,22] However, some diseases mimic gout, such as rheumatoid arthritis (RA), pseudogout, septic arthritis, sarcoidosis, trauma, nodal osteoarthritis (OA), synovial cysts, avascular necrosis, lymphoma, or other neoplasms, and these may not be differentiated.[17,23] In the present case, there was no specific finding regarding the disease in the clinical, radiological, and laboratory examinations, but the discharged milky fluid from the mass during the surgery caused us to consider tophaceus gout. This diagnosis was then confirmed by a histopathological examination.

If the solubility of monosodium urate in plasma limit is exceeded, monosodium urate crystals form in the joints and soft tissues. These crystals are then quickly phagocytosed by the monocytes and macrophages, resulting in the production of proinflammatory cytokines like interleukin-1 (IL-1), IL-6, and tumor necrosis factor-alpha (TNF-α). These inflammatory mediators promote the neutrophil influx and are responsible for the systemic effects observed during an acute gout attack.[17] Monosodium urate forms are spotted and needle-shaped with a strong, negative birefringence under polarized light microscopy. The crystals are spotted and yellow when parallel and blue when vertical to the compensator and may be intracellular or extracellular.[10,17]

There may be no findings other than soft tissue swelling surrounding the affected joint in a direct radiographic examination of acute gout arthritis.[17] Radiographic bone changes may be encountered six to eight years after the initial attack in 45% of the patients, but they are not highly specific and sensitive enough for diagnosis.[24] Magnetic resonance imaging (MRI) of tophi in soft tissues is usually nonspecific, and it may imitate neoplasia and infection. Furthermore, variable signal intensities in the T1- and T2-weighted images depend on the difference in the calcium concentration in the tophi.[10,25] Chen et al.[26] reported that calcified tophi are rare in the wrist and that the presence of such calcification probably depends on calcium crystals in conjunction with calcification in the cholesterol stored in the tophi along with an underlying calcium metabolic disorder or bone debris from large joint destruction.[27,28] In our case, there was no evidence except for smooth, bordered calcium deposits in the radiological evaluation.

Controlling acute gout attacks, preventing the formation of new crystals, and keeping the serum uric acid level below 6 mg/dl for the resolution of crystal deposits over a prolonged period are of utmost importance;[15,29] however, the underlying malignancies and metabolic disorders should be primarily corrected.[11] Treatment options for acute gout attacks include changes in the patient's lifestyle and the use of NSAIDs, colchicine, corticosteroids, and corticotrophin.[11,15] However, colchicine is not prescribed very often because of its serious side effects, although it is effective for treating acute gout arthritis.[11] It has also been suggested that hopeful results might be obtained through IL-1 antagonists, for example anakinra, a human recombinant IL-1 receptor antagonist, and canakinumab, which can be used as a monoclonal antibody against IL-1beta. These could possibly be us for the patients who were resistant to the usual modes of treatment.[15]

Allopurinol and febuxostat, urate lowering drugs, bring hyperuricemia under control by decreasing urate production, which allows for the recycling of urate deposits.[30-32] Probenesid, a uricosuric agent, is used less frequently in the treatment of hyperuricemia.[33] The main problem with using these agents is the promotion of stone formation since it increases the urinary excretion of urate soon after the initiation of therapy. Practically, the longterm control of hyperuricaemia is not adequate in up to 25% of patients. Moreover, uricosuric drugs are not effective in patients who have impaired renal function.[11]

Although surgical treatment is rare in gout arthritis, it is usually performed on patients suffering from recurrent attacks and those with developing deformities or acute pain, infection, and joint destruction.[2]

In conclusion, tophaceous gout should be considered in synovial calcium deposits with atypical localization which are encountered in premenopausal young women without a history of hyperuricemia and acute inflammatory arthritis attacks.