Objectives: In this study, we determined whether attention deficit/hyperactivity disorder (ADHD) is accompanied by benign joint hypermobility syndrome (BJHS) and evaluated the incidence of BJHS in patients with ADHD.

Patients and methods: This s tudy was p erformed in the Ufuk University Faculty of Medicine, Departments of Physical Medicine and Rehabilitation and Psychiatry between November 2007 and February 2008. A total of 54 patients (45 males, 9 females; mean age 9.7±2.2 years; range 7 to 12 years) with ADHD and 36 healthy controls (19 males, 17 females; mean age 9.8±2.3 years; range 7 to 12 years) were included in the study. The sociodemographic and clinical characteristics of the individuals and the joint pain severity in the last month were recorded. Pain severity was assessed with the Faces Pain Scale-Revised (FPS-R) and the Likert Pain Scale. The joint hypermobility was evaluated by using Beighton scores.

Conclusion: The results of this study support that joint hypermobility may be associated with ADHD, and this condition should be taken into consideration in assessing the complaints of patients with ADHD-related musculoskeletal symptoms.

Attention-deficit/hyperactivity disorder (ADHD) is the most common psychiatric disorder in children with symptoms of inattention, hyperactivity, distractibility, and impulsivity. Patients with ADHD have cognitive complaints and difficulty concentrating, retaining short-term memory, and executing simple daily routines.[1-6] Low performance levels in school, behavioral disruptions, and emotional liability are other signs of this condition.[1,3,6,7] These children have poor self-esteem and a high risk of depression and anxiety because of adverse feedback from their teachers, friends, and family.[1,3,6] The prevalence of ADHD is 5-10% in children and 4% in adults.[3] The etiology of ADHD is still unknown. Pregnancy complications and genetic transmission are accused of being etiologic factors for this disorder.[4,6,7]

Benign joint hypermobility syndrome (BJHS) is a musculoskeletal disorder characterized by excessive movement of the joints without a systemic rheumatological disease.[8] This syndrome is seen in healthy patients suffering from arthralgia without any explanation, soft tissue rheumatism, joint laxity, and in healthy patients without Marfan and Ehlers-Danlos syndromes.[9,10] The prevalence of BJHS varies from 5% to 38% depending on age, sex, and race.[11,12] This syndrome is thought to be a hereditary connective tissue disorder resulting from a defect in collagen.[13] Hypermobility and chronic pain in multiple joints are primary clinical signs of BJHS.[14] An increased prevalence of psychological disturbances, such as anxiety and depression, has been found in patients with BJHS.[15-17] Speech impairment, learning disabilities, poor coordination, delayed walking, and problems with handwriting tasks have also been reported in children with BJHS.[14]

Many musculoskeletal findings have been reported in children with ADHD, including postural anomalies, chronic fatigue syndrome, widespread musculoskeletal pain, and fibromiyalgia.[5,7] Also, signs of ADHD have been reported in disorders associated with joint laxity.[18-21] The aim of this study was to determine whether ADHD is accompanied by BJHS and to evaluate the incidence of BJHS in patients with ADHD.

The Diagnostic and Statistical Manual of Mental Disorders, Fourth Edition (DSM-IV) and the Schedule for Affective Disorder and Schizophrenia for School- Age Children-Present and Lifetime version (K-SADSPL) were used for diagnosing ADHD.[22,23]

The DSM-IV has specific criteria that is required for diagnosis. These criteria include symptoms of inattention and hyperactivity/impulsivity. Six of nine characteristics of each symptom must be present and also be expressed for six months or more.[3,7]

The K-SADS-PL is a semi-structured instrument developed by Kaufman et al.[23] to screen the psychopathology in children and adolescents between the ages of six and 18. It screens the psychopathology by gathering information from both parents and their children. Mood disorder, psychotic disorder, anxiety disorder, disruptive behavioral disorder, elimination disorder, eating disorder, and tic disorder along with alcohol and other substance use disorders are the psychiatric conditions included in this instrument. The reliability and validity of the Turkish version of K-SADS-PL has previously been shown.[24] After the psychiatric evaluation, patients with mental retardation, mood disorder, anxiety disorder, disruptive behavior disorder, cerebral palsy, epilepsy, brain disorder, or any other known genetic disorder were excluded from the study.

The sociodemographic and clinical characteristics of the individuals with joint pain (neck, shoulder, elbow, hand, low back, back, hip, knee, foot-ankle) and the accompanying pain severity in the last month were recorded. Pain severity was assessed with the Faces Pain Scale-Revised (FPS-R) scale and the Likert scale. The FPS-R is a scale consisting of six faces without smiles or tears. It is easy for children between the ages of six and 14 years to use and the results are correlated on a numerical scale from zero to 10.[25]

Joint hypermobility was evaluated by using Beighton scores for diagnosing BJHS. The Beighton scores were: (i) Passive apposition of the thumbs to the flexor aspects of the forearm, (ii) passive dorsiflexion of the little fingers beyond 90°, (iii) hyperextension of the elbows beyond 10°, (iv) hyperextension of the knees beyond 10°, (v) forward flexion of the trunk with the knees straight. The tests given are bilateral, and the scoring is on a scale ranging from zero to nine. Subjects who scored four or higher were considered to have BJHS.[26]

The Ufuk University ethics committee approved the study, and informed consent forms were signed by the parents of the children.

The SPSS for Windows Release 15.0 version (SPSS Inc., Chicago, Illinois, USA) software was used for the statistical analysis. Descriptive statistics (mean ± standard deviation or median-minimum-maximum values) were used for determining the distribution of the age, sex, education, and joint pain of the patients. The Mann-Whitney U-test was used for comparing the numerical variables and the chi-square test for the categorical variables. A p value of 0.05 or less was considered significant.

The demographic and clinical characteristics of the subjects are given in tables 1 and 2. No significant differences were observed between the groups regarding age, gender, or education.

Table 1. Demographic characteristics of the patients with attention deficit/hyperactivity disorder and the control group
×

Table 2. Clinical characteristics and Beighton scores of the patients with ADHD and the control group
× 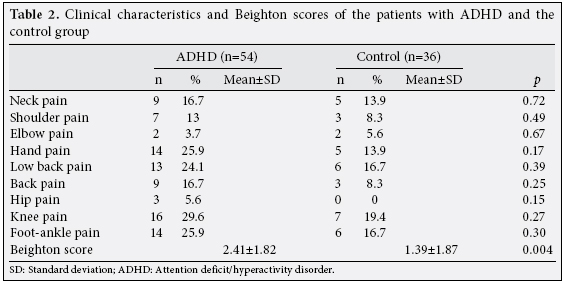 Benign joint hypermobility syndrome was found in a ratio of 31.5% patients with ADHD and 13.9% of the control group. The difference between ratios was found to be statistically significant (p=0.05). Girls comprised 33.3% of the cases with BJHS while 66.6% were boys.

Table 3. Mean and median values of the Faces Pain Scale-Revised of the patients with attention deficit/hyperactivity disorder and the controls
×

Table 4. Mean and median values of the Likert Pain Scale of the patients with attention deficit/hyperactivity disorder and the controls
×

Attention deficit hyperactivity disorder is a psychiatric disorder characterized by attention deficit, hyperactivity, distractibility, and impulsivity leading to functional impairment in social, school, and occupational life.[27] Joint hypermobility syndrome is a connective tissue disorder condition which includes the increased distensibility of joints in the absence of rheumatological disease.[8] The signs of ADHD, for example hyperactivity or attention deficit, have been reported in diseases characterized by joint laxity in case reports.[19,20] In literature, there are several publications about musculoskeletal disorders, which accompany ADHD, but no study was found evaluating the frequency of joint hypermobility in patients with ADHD. To our knowledge, this is the first report on the relationship between ADHD and BJHS.

The association of BJHS with psychological diseases such as anxiety and depression has been reported in some publications.[15-17] Bulbena et al.[16] reported that the risk of encountering anxiety disorders, like panic disorder, agoraphobia, and simple phobia, increases in individuals with BJHS. In another study, 526 patients were evaluated by Bulbena et al.,[17] and a significant increase in anxiety scores in patients with joint hypermobility; therefore, joint hypermobility was determined to be a predisposing factor for the anxiety. In contrast, Martín-Santos et al.[28] concluded that patients with panic disorder and agoraphobia were 16 times more likely to have joint hypermobility syndrome than healthy subjects. The frequency of joint hypermobility was found to be 67.7%.

In the study by Hofman et al.[18] 13% of 30 schoolage children with Marfan syndrome had learning disabilities, and 17% were determined to have ADHD. It is reported that learning disabilities are related to joint laxity. Hyperactivity and autistic retardation were reported with Lujan-Fryns syndrome, which is an X-linked mental retardation syndrome progressing with characteristics such as marfanoid habitus, joint laxity, pectus excavatum, and kyphosis.[20]

In our study, we aimed to determine the BJHS frequency in children with ADHD and we found BJHS in 31.5% of the patients with ADHD and 13.9% in the control group. The difference was found to be significant. Also, there was a statistically significant increase in the Beighton total score in ADHD patients compared with the control group. These results lead to the conclusion that there is a pathogenic relationship between the development of the central nervous system and connective tissue diseases.

Benign joint hypermobility syndrome is more frequent in girls.[29] However, in this study, most of the BJHS cases were found in boys. A higher frequency of ADHD in males is the reason for that result.[1]

There are no accepted diagnostic standards for evaluating BJHS, and there is not enough literature showing the reliability of the tests used for diagnosis.[37] In this study, Beighton scores were used for diagnosing BJHS. If another test was used, maybe the results would be different. Another limitation of this study is the relatively small sample size for evaluating the incidence of BJHS.

In conclusion, our study results support that joint hypermobility seems to be associated with patients with ADHD, and this should be taken into consideration in assessing patients’ musculoskeletal complaints. However, more studies with a higher number of children are needed to determine the association between musculoskeletal pain and ADHD.