Association of Interleukin-17F 7488A/G and 7383A/G Polymorphisms With Rheumatoid Arthritis: A Meta-Analysis

Rheumatoid arthritis (RA) is a common autoimmune disease that is associated with the destruction of affected joints by chronic inflammation and the infiltration of CD4+ T cells.(1) Up to now, the etiology of RA remains not fully understood. However, it is believed that a complex interaction between genetic and environmental factors results in the initiation and development of RA.(2,3) Since the first genetic molecular human leukocyte antigen (HLA)-DRB1 was demonstrated to contribute to RA susceptibility,(4) many more genetic factors were found to be associated with the pathogenesis of RA.(5,6)

Interleukin-17 (IL-17) is a proinflammatory cytokine family secreted by activated T cells.(7) IL-17 consists of six family members: IL-17A, IL-17B, IL-17C, IL-17D, IL-17E, and IL-17F.(8) Among them, IL-17A is the first discovered in 1993 by Rouvier et al.,(9) and the later studies disclosed that IL-17A played an important role in RA by aggravating the synovial inflammation and bone destruction.(10) Like IL-17A, IL-17F, which shares strong homology with IL-17A, was expressed in synovial tissue and synoviocytes of RA and showed important functional and biological properties in the regulation of inflammatory reactions and immune responses.(11,12) In 2010, Paradowska-Gorycka et al.(13) initially investigated the two polymorphisms of IL-17F 7488A/G (rs763780) and 7383A/G (rs2397084) in RA in a Polish cohort. Although no significant association between the two variants and RA was found in this study, the following researches have proved that there was a clear correlation between IL-17F polymorphisms and RA susceptibility.(14,15)

However, it is undeniable that the results remained inconsistent among studies due to the instability of trend in different publications. For instance, the positive relationship between IL-17F 7488A/G and RA risk reported by Bogunia-Kubik et al.(15) could not be replicated by Pawlik et al.(16) even in the same population. It is necessary to carry out a comprehensive study to summarize those inconsistent results. Therefore, in this meta- analysis, we aimed to summarize and estimate the relationship between RA susceptibility and two polymorphisms of IL-17F 7488A/G and 7383A/G.

This study was conducted at The Third Affiliated Hospital of Third Military Medical University, China between November 2016 and December 2017. PubMed, Web of Science and Embase online databases were systematically searched by two independent investigators to identify relevant publications up to 01 July 2017. The following key words and their combination were used: ‘‘Interleukin-17F OR IL-17F’’, ‘‘genetic polymorphisms OR polymorphism OR variant’’ and ‘‘rheumatoid arthritis OR RA’’. The title and abstract of each study were carefully reviewed. References list of relevant studies and reviews were also manually searched.

Eligible studies met the following criteria: (i) evaluation of the association between IL-17F polymorphisms and RA; (ii) studies focusing on human being with controls from healthy population; (iii) have detailed allelic data or genotype distribution frequencies of cases and controls. Exclusion criteria: (i) meeting, review, comment and duplication of previous publications; (ii) studies without detailed allelic or genotype data; (iii) studies that did not focus on IL-17F 7488A/G or 7383A/G polymorphism; (iv) family-based studies. Study selection was achieved by two independent investigators.

All statistical analyses were performed by Review Manager software version 5.2 and Stata software version 12.0 (StataCorp, College Station, TX, USA). Chi-square test was used to calculate the HWE in control group, and the HWE was considered a significant departure when p<0.05. Odds ratios (ORs) and 95% confidence intervals (CIs) were calculated to evaluate the strength of the association between IL-17F 7488A/G and 7383A/G polymorphism and susceptibility to RA. Meta-analyses were performed by allelic model (7488A/G: G vs. A; 7383A/G: G vs. A), heterozygote model (7488A/G: GA vs. AA; 7383A/G: GA vs. AA), homozygote model (7488A/G: GG vs. AA; 7383A/G: GG vs. AA), dominant model (7488A/G: GA+GG vs. AA; 7383A/G: GA+GG vs. AA), recessive model (7488A/G: GG vs. GA+AA; 7383A/G: GG vs. GA+AA). Cochran’s Q-statistic and I2-statistic were used to evaluate the heterogeneity. The heterogeneity was considered to be significant when I2>50% and/or p<0.1. Random effects models or fixed-effect model was applied to pool the effect sizes depending on the heterogeneity. Sensitivity analysis was also performed to test the robustness of the pooled effects by omitting the stud deviated from HWE. Potential publication bias was assessed by Begg’s funnel plot and Egger’s regression test (p<0.05 was considered statistical publication bias).

Based on the search strategies, a total of 94 studies were identified from PubMed, Web of Science and Embase databases. Forty-seven were excluded by scanning titles and abstracts since they were reviews, meeting reports, letters or irrelevant to the present study. After reviewing the full texts of the remaining 11 publications, we excluded four reports as they either contained no key information on IL-17F 7488A/G or 7383A/G or were not case-control studies. Finally, seven studies including 1,409 RA patients and 1,303 controls were eligible for the present study.(13-19) The flow chart of the literature research and study selection is shown in Figure 1. Among the included studies, all seven investigated the correlation between 7488A/G and RA susceptibility, but only four (containing 1,093 cases and 969 controls) researched 7383A/G and RA risk.(13,14,16,19) Moreover, in the study of Louahchi et al.,(19) only allele data could be extracted. The main characteristics of these studies are shown in Table 1. Allele and genotype distributions of 7488A/G and 7383A/G are listed in Table 2.

Table 1. Characteristics of studies included in this meta-analysis for interleukin-17F polymorphisms
× 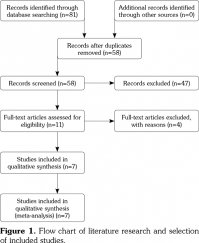 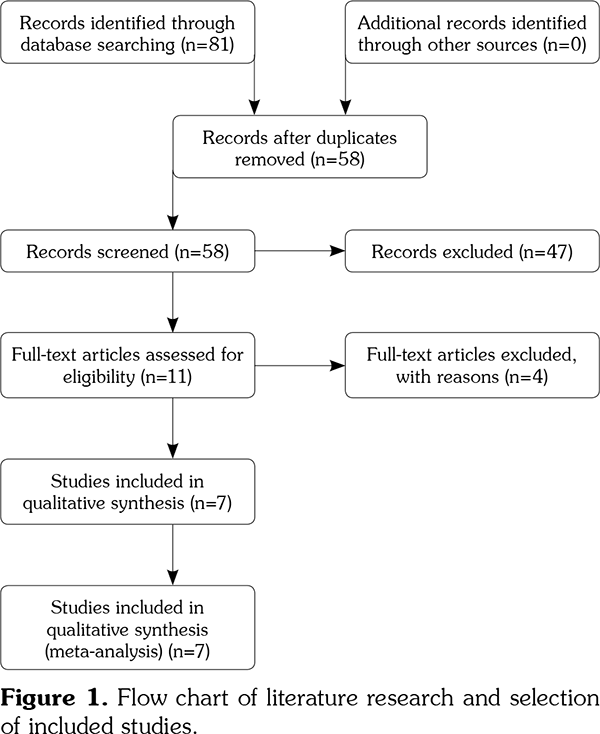 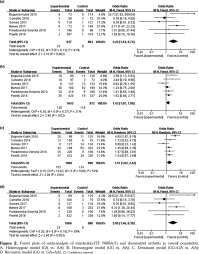 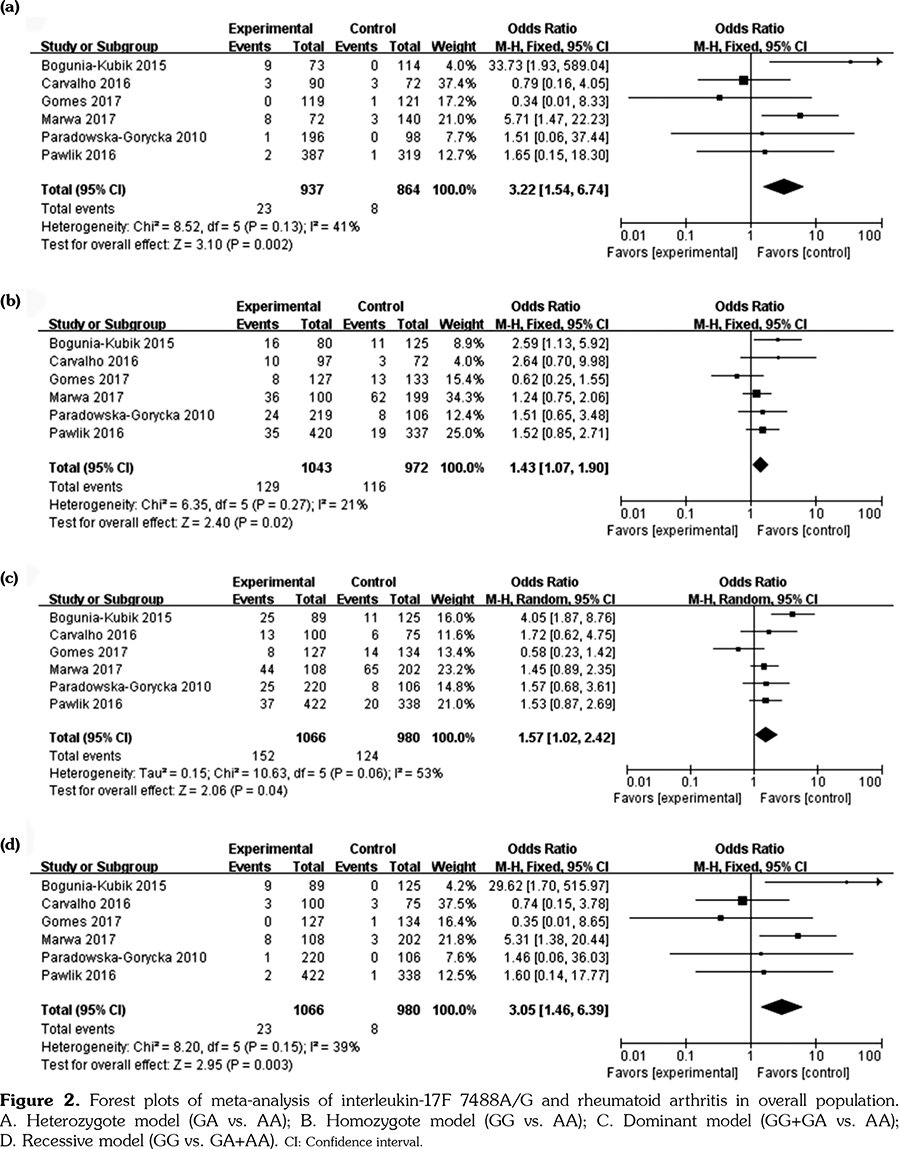 
Sensitivity analysis was conducted to identify the studies that have potential influence on the pooled effects. We analyzed the controls of each study for the fitness in the HWE. The study of Carvalho et al.(17) was deviated from HWE. In addition, the HWE of Louahchi et al.(19) was not available for the lack of genotype frequency data. Therefore, sensitivity analysis was performed by deleting the two studies in all model analyses. The results from the remaining studies showed that the pooled effects were not significantly altered by the two studies. Begg’s funnel plot and Egger’s regression test were used to evaluate the publication bias for IL-17F 7488A/G polymorphism studies. However, no significant publication bias was identified in overall comparisons (Figure 3). As for the publication bias of IL-17F 7383A/G analyses, the analysis of publication bias was not performed due to the limited number of eligible studies. 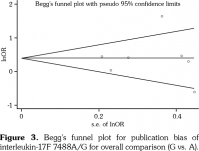 Figure 3. Begg’s funnel plot for publication bias of interleukin-17F 7488A/G for overall comparison (G vs. A).
×

It has been previously reported that IL-17F polymorphisms were excellent candidates serving as genetic risk factor in various inflammatory diseases including inflammatory bowel disease,(20) Behcet's disease,(21) ulcerative colitis(22) and asthma,(23) as well as RA.(15) However, the results from recent studies were inconsistent. In the present meta- analysis, we included seven case-control studies containing 1,409 RA patients and 1,303 controls for IL-17F 7488A/G, four of which containing 1,093 cases and 969 controls for IL-17F 7383A/G to pool the effects of the two polymorphisms on RA susceptibility. The results showed that IL-17F 7488A/G was significantly associated with RA as proved by heterozygote model (GA vs. AA), homozygote model (GG vs. AA), dominant model (GG+GA vs. AA) and recessive model (GG vs. GA+AA), which indicated that the GG and/or GA genotype holders have a higher risk for developing RA. Moreover, 7488A/G variant might correlate with RA risk in an ethnic-specific manner, specifically in Europeans but not in Americans or Africans. However, no evidence was found for the relationship between IL-17F 7383A/G and RA susceptibility in any genetic models either in overall or subgroup population.

As a chronic inflammatory disease, RA was affected by numerous cytokines, which initiate and maintain the pathological response in joints. A growing number of studies have shown the critical role of IL-17F in RA pathogenesis and the significant association of IL-17F polymorphisms with RA susceptibility.(12,14,24) IL-17F shared about 50% homology of amino acid sequence with IL-17A.(25) In the synovial fluid and tissue of RA patients, the expression level IL-17 was markedly upregulated compared with normal controls, which regulate the turnover of matrix and promote cartilage destruction.(26,27) Recently, three polymorphisms of IL-17F in RA have been studied.(14,16) In the present study, we focused on the association of the two variants IL-17F 7488A/G, which changes amino acid 161 in exon 3 from histidine (A allele) to arginine (G allele), and 7383A/G, which leads to the changes of amino from glutamic acid (A allele) to glycine (G allele), with RA risk. Both variants might influence molecular structure and biological function of the protein. For example, the substitution of histidine to arginine of IL-17F 7488A/G had impact on the affinity of binding with IL-17F receptor.(28)

Although several studies have investigated the correlation between IL-17F polymorphisms and RA susceptibility, the results were scattered and discrepant. In our work, we collected the current evidence and found that IL-17F 7488A/G was indeed significantly associated with increased RA risk. This was in line with a previous meta-analysis by Lee and Bae,(29) which enrolled four and two studies for IL-17F 7488A/G and 7383A/G, respectively, demonstrating that 7488A/G but not 7383A/G was closely correlated with RA development in Caucasians, which mainly consist of Europeans. In addition, they also found that the levels of circulating IL-17 in RA patients were markedly higher than that in healthy controls. Another meta-analysis including four studies also observed a positive association between IL-17F 7488A/G and RA susceptibility.(30) However, caution should be taken for the conclusion of this meta-analysis since a study on osteoarthritis was included in the RA group.(31)

There were several strengths of our work. First of all, we performed the present study based on a larger cohort including 1,409 RA patients and 1,303 controls compared to previous meta-analyses which helped to strengthen the evidence that IL-17F 7488A/G was significantly associated with RA. Compared with the previous meta-analyses, a greater number of studies containing different publications were included. Furthermore; subgroup analysis, sensitivity analysis and publications bias test were also carried out. Moreover, a strict inclusion and exclusion criteria were implemented to ensure the quality of included studies and reliability of the results. Finally, selection bias was well-controlled via literature research and no publication bias was identified by Begg’s funnel plot and Egger’s test.

Nevertheless, several limitations should be considered in the present study. Firstly, statistical heterogeneity was observed in some comparisons involving both IL-17F 7488A/G and 7383A/G polymorphisms. This could not be effectively eliminated by subgroup and sensitivity analysis, and therefore might partially influence the robustness of the results. Additional details are needed to evaluate the sources of the heterogeneity such as sample size, age of patients and genotyping methods. Secondly, there was one study derived from HWE and one without HWE inflammation. Although the pooled effects were not significantly influenced by the two studies, potential uncertainty factors may be present in the pooled efficiency. Thirdly, the number of original studies and patients were limited, particularly for 7383A/G polymorphism, which may cover the positive correlation between 7383A/G and RA. To this issue, additional case-control studies with high quality are needed to further disclose the association between 7383A/G and RA susceptibility.

In conclusion, despite the limitations above, our results strongly suggested that IL-17F 7488A/G polymorphism was significantly associated with a higher risk of RA in overall population and subgroup of Europeans, while no clear correlation between 7383A/G and RA was observed by the current available evidence. Further well-designed studies with larger sample sizes and ethnic groups are required to strengthen the results of the current study.