Systemic lupus erythematosus (SLE) is an autoimmune disorder resulting in a broad spectrum of manifestations in several organs, mainly skin and kidney. SLE occurs with interaction of genetic and environmental factors. The most remarkable genetic predisposition to SLE is deficiency of early components of the classical complement pathway. A five-year-old, previously healthy female patient was admitted to our hospital with headache, fever, focal partial seizure, diagnosed and treated as encephalitis. She was re-admitted to our hospital at six years of age with fever, fatigue, alopecia and oral aphthous ulcers and necrotizing vasculitis on extremities. Significant hypocomplementemia, anemia, proteinuria and positive autoantibodies and coombs test led to the diagnosis of SLE. Due to early disease onset and distinct autoimmune manifestations, we diagnosed our patient with type I complement 2 (C2) deficiency with a frameshift mutation in C2 gene and a serum C2 level of <0.2 mg/dL. To our knowledge, this is the first case of genetically confirmed and successfully treated hereditary C2 deficient SLE patient diagnosed with necrotizing vasculitis. We wish to highlight that distinctive autoimmune manifestations should guide physicians to research on monogenic lupus, particularly C2 deficiency, even in the absence of coexisting recurrent pyogenic infections.

Systemic lupus erythematosus (SLE) is an autoimmune disorder associated with interaction of genetic and environmental factors and a broad spectrum of manifestations in several organs, mainly skin and kidney.(1) Childhood SLE represents 15-20% of all SLE patients and its course is more severe with higher incidence of nephritis and hematologic disorders.(2)

Complement system activation by presence of immune complexes is known to be the leading cause of inflammation in SLE. It is not surprising that the most remarkable genetic predispositions to SLE are deficiencies of early components of classical complement pathway.(1) In this article, we report a pediatric patient who presented with autoimmune manifestations, met SLE criteria over time and was finally diagnosed with heterozygote type I complement 2 deficiency (C2D).

A five-year-old female patient was admitted to our hospital with headache and fever for the last five days. Brain magnetic resonance imaging showed bilateral focal lesions but particularly in right hippocampal gyrus and basal ganglions compatible with encephalitis. With partial benefit from treatment with vancomycin, meropenem and acyclovir, the patient had developed focal partial seizure lasting 10 minutes on the right side of her face and right hemiparesis on the 12th day of hospitalization. Electroencephalogram showed epileptiform activity originating from left hemicortex and the patient was successfully treated with phenytoin, phenobarbital and carbamazepine subsequently. Neurological manifestations clinically improved and hemiparesis almost disappeared at second month after discharge. 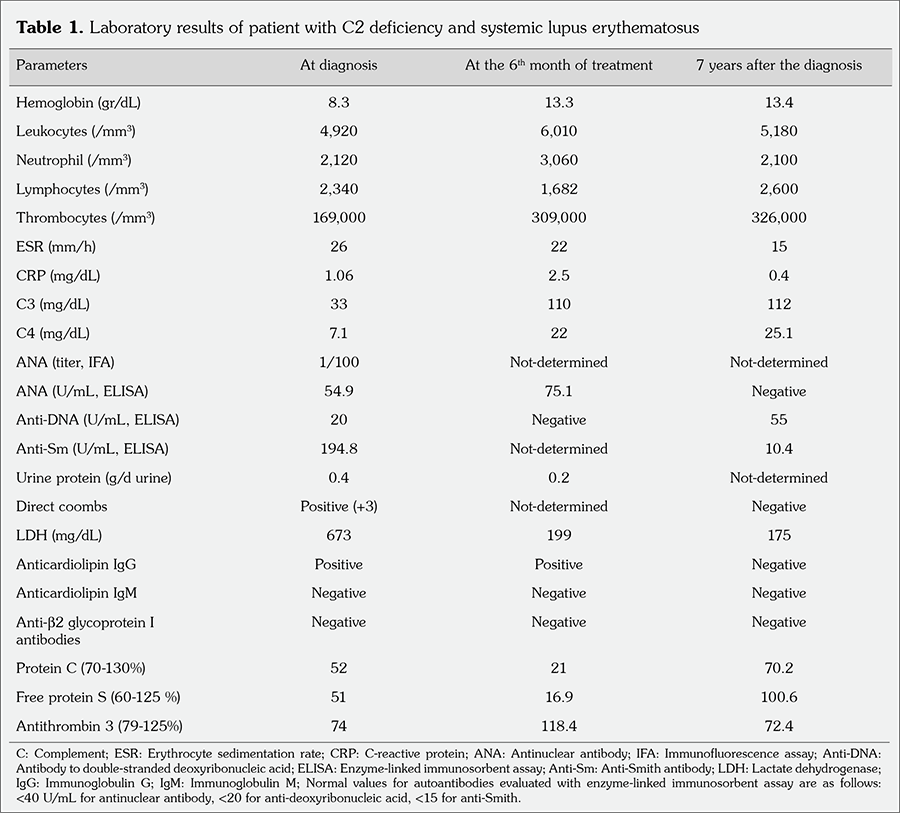 Systemic lupus erythematosus is a multi-systemic autoimmune disease demonstrating complement consumption and type I interferon signaling. There is also an imbalance in apoptosis and apoptotic material removal, which results in break in tolerance and antibody production against self-antigens. In recent years, description of monogenic lupus-like disorders has improved our understanding of SLE.(1)

Deficiencies of early components of complement system were the first defined monogenic causes of lupus. Autoimmunity may occur due to altered opsonization, immune complex removal from the circulation, clearance of apoptotic debris, and lack of normal B cell tolerance, overwhelming production of autoantibodies in C2D.(4)

While the frequency of heterozygous C2D is 1-2% in Caucasian populations, its prevalence is higher in SLE patients with 2.4-5.8%.(1,5) C2 deficient SLE patients typically present with renal disease, arthritis, malar rash, discoid rash and photosensitivity.(1,6) Our patient clinically differed from the patients in the literature with the presence of oral aphthous, cutaneous vasculitis, hematological and neurological findings and the absence of arthritis or other skin findings.

Immunological analysis of C2D patients with SLE has shown low titer positive ANA and a distinctive profile of negative anti- deoxyribonucleic acid and positive anti-Sjögren’s syndrome A and anti-ribonucleoprotein. Despite the absence of anti-phospholipid syndrome (APLS), patients with C2D tended to have positive anti-cardiolipin antibodies.(5,6) Similarly, our patient had transiently positive anti- cardiolipin antibody without clinical APLS. She was transiently positive for ANA and anti-Smith antibodies with high titers, in contrast to the literature. Although our patient did not have any thrombotic event, she had multiple hereditary and acquired factors for hypercoagulation such as homozygote MTHFR A1298C mutation, transiently reduced levels of protein C and S. To our knowledge, these additional factors do not seem to increase thrombotic risk in SLE patients.(7)

Regarding genotype; type I C2D, usually caused by a deletion and generation of a stop codon in C2 gene, results in the absence of detectable serum C2. Type II C2D leads to reduced plasma levels of C2 caused by particularly a point mutation.(1) Our case was diagnosed as SLE and type I C2D with a novel c.2170-2170 delC (p.P724Rfs*16) frameshift mutation causing premature stop codon and undetectable serum levels of serum C2.

Since necrotic skin ulcers and vasculitis are unusual in SLE course and C2D, the most distinctive finding was cutaneous necrotizing vasculitis in our patient.(8,9) To the best of our knowledge, this is the first case of genetically confirmed and successfully treated hereditary C2 deficient SLE patient diagnosed with necrotizing vasculitis. We wish to highlight that early disease onset or distinctive autoimmune manifestations should guide physicians to research on monogenic lupus, particularly C2D, even in the absence of coexisting recurrent pyogenic infections.