Objectives: This study aims to investigate if short-term topical treatment with cetylated fatty acid (CFA) cream reduces the detrimental effects of early and advanced knee osteoarthritis (OA).
Patients and methods: The study included 113 patients (32 males, 81 females; median age 70.0 years; 95% CI: 69.0 to 71.4 years) with knee OA diagnosed according to American College of Rheumatology classification criteria. Each patient underwent knee X-rays, followed by a CFA topical treatment (two applications per day for one week). Before and after the treatment, patients completed a Western Ontario and McMaster Universities Osteoarthritis Index questionnaire. All knee X-rays were classified according to Kellgren-Lawrence scale.
Results: After one week of treatment, decreased Western Ontario and McMaster Universities Osteoarthritis Index overall scores and sub-scale scores were observed in the whole cohort (p<0.005) and Kellgren-Lawrence scale grade 3 group (p<0.05). In the Kellgren-Lawrence scale grade 2 group, overall Western Ontario and McMaster Universities Osteoarthritis Index scores and pain and functional ability sub-scale scores improved (p<0.05).
Conclusion: Administration of topical CFA may mitigate most common symptoms in knee OA. Our findings suggest that topical CFA is effective in all knee OA patients with slightly higher evidence for those with advanced disease.

Guidelines from the Osteoarthritis Research Society International and American Academy of Orthopaedic Surgeons on non-surgical management of knee OA.(4,5) recommend non-pharmacological strategies (such as the use of walking cane, land- or water-based exercises, and biomechanical interventions) and drugs. The latter may be oral medications (paracetamol, duloxetine, and non-steroidal anti-inflammatory drugs [NSAIDs]), injections (corticosteroids, hyaluronic acids), and topical creams (NSAIDs, capsaicin). Although topical treatment may present less side effects compared to oral medications, it may still cause adverse events leading to withdrawal. Indeed, the cardiovascular risk related to NSAIDs seems to further increase subchondral bone ischemia hastening the OA progression.(6)

Oral and topical cetylated fatty acids (CFAs) are not known to have any adverse or unwanted effects while their benefits have been well-demonstrated; however, their mechanism of action has not been well-elucidated. Reduced pro-inflammatory cytokine levels, changes in membrane fluidity and signal transduction pathways reducing the proteoglycan degrading enzyme activity, and release of leukotriene B4 from neutrophils have been hypothesized.(7,8)

Cetylated fatty acids proved to be helpful in knee, elbow, and wrist OA as well as in myofascial pain syndrome of the neck.(8-10) In particular, CFA topical treatment in knee OA subjects improved movement range, the ability to ascend and descend stairs, and to rise from sitting.(9,11,12)

Using X-rays, knee OA can be classified into the following grades: minimal (early knee OA), moderate (advanced knee OA), and severe (late knee OA).(13) In the first two stages, surgical knee replacement using prosthesis is avoidable and the use of systemic analgesics or pharmacological topical treatment is common. However, to our knowledge, the stage of knee OA where CFA is most effective has not been assessed. Therefore, in this study, we aimed to investigate if short-term topical treatment with CFA cream reduces the detrimental effects of early and advanced knee OA.

One-hundred and thirteen consecutive knee OA patients (32 males, 81 females; median age 70.0 years; 95% CI: 69.0 to 71.4 years) from four centers were enrolled between January 2014 and December 2016. Diagnosis was established according to American College of Rheumatology (ACR) and European League Against Rheumatism (EULAR) classification criteria.(14) Exclusion criteria were age below 18 years, concomitant knee arthritis, previous knee fractures or major trauma, body weight increase or decrease (±5 kg), and relevant change of activity level during the period of the study. Only one knee was assessed for each patient. Analgesics (such as paracetamol and opioids) were permitted but patients could not exceed the dosages taken before the study beginning. All patients used a CFA-based topical cream mainly made of a blend of CFA (Cetilar®, PharmaNutra, Pisa, Italy). Each patient was instructed to apply a standard quantity of cream on the most painful knee twice per day during a period of one week. The study protocol was approved by the Local Ethics Committees. A written informed consent was obtained from each patient. The study was conducted in accordance with the principles of the Declaration of Helsinki.

The most painful knee of each patient was assessed with an anteroposterior X-ray before the CFA treatment. Each X-ray was evaluated according to the Kellgren-Lawrence (K-L) scale:(13) grades 2 and 3 were considered as expression of early and advanced knee OA, respectively.

The clinical spectrum of knee OA was measured using the Western Ontario and McMaster Universities Osteoarthritis Index (WOMAC). The analysis of WOMAC sub-scales gives an accurate insight of the most common OA signs and symptoms (stiffness, pain, and functional limitation). The Italian version of WOMAC questionnaire(15) was administrated to each patient twice: the first time one to five days before the beginning of CFA local application (baseline or t0) and the second time after three days from the end of CFA treatment (ending or t1).

Patient characteristics and WOMAC overall and sub-scale scores at t0 and t1 were listed in Table 1. There were no statistically significant differences in terms of sex prevalence and WOMAC scores (both in t0 and t1) between K-L scale grade 2 and 3 groups. The discrepancy between the median ages of the above mentioned groups of 2.5 years was slightly higher than the p value cut-off considered statistically significant (p=0.0502). 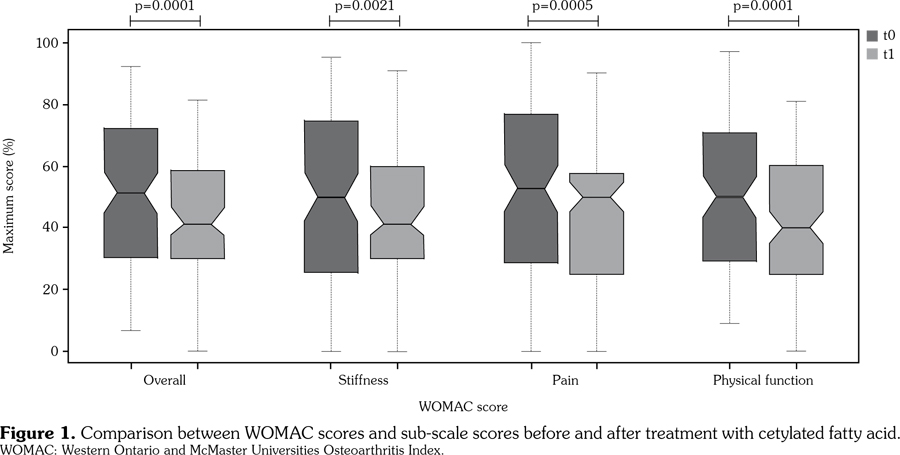 As far as we know, this is the largest cohort of knee OA patients where the effect of CFA topical treatment was investigated. Previously, oral CFA treatment achieved positive outcomes (e.g. knee range of movement, stair climbing ability, static postural stability, and up and go test) in knee OA subjects.(8,11,12) Up to date, no standardized protocol for topical CFA cream administration has been designed; however, in general, it appears that tangible advantages are evident after one or two months of continuous application.(8,11,12) Nevertheless, Kraemer et al.(9) described WOMAC score improvement with one-week lasting treatment. In accordance with this study, our results showed that one-week CFA cream application (twice per day) appears to be sufficient to verify its effectiveness in early or advanced knee OA.

In this study, we observed an average improvement of 20% in baseline WOMAC (both overall and sub-scale scores) in patients with early (K-L grade 2) and advanced (K-L grade 3) knee OA. Furthermore, there was a relatively low WOMAC pain score decrease (less than 10%) in both groups. This outcome may be likely due to the oral analgesic treatment that patients were allowed to continue, without dose increase, during the study. The improvement in stiffness score in K-L grade 2 group was not statically significant even if there was a distinct trend. On the other hand, a remarkable change was shown in the WOMAC functional ability score. Thus, these observations strengthen the hypothesis that disability is more influenced by pain than by knee OA severity.(16)

Topical treatment of CFA was effective in subjects with advanced knee OA since they experienced a statistically significant improvement in all WOMAC sub-scale scores. The only baseline difference between the two K-L grade subgroups was the median age. However, from a statistical and biological point of view, this dissimilarity is not enough to account for these results. In general, CFA cream application was more helpful in the advanced knee OA group.

We are aware that this study has some limitations. First is the lack of a control group with subjects receiving a topical placebo. A comparison between CFA and placebo was not within the aim of this study. Although this issue was already extensively assessed in previous investigations,(8,9,12) a placebo arm would have allowed to obtain clearer results. The lack of evaluation of CFA positive long-lasting effect may be another limitation. However, from a clinical point of view, despite the general interest of this topic, this limitation may be negligible. CFA cream application is not associated with side effects,(10) thus it can be safely prescribed as self- and on-demand treatment. Finally, the possible reduction in the analgesics’ dose was not assessed. We are confident that this is a minor lack as it is usually taken into account as surrogate or secondary endpoint in randomized control trials.

In conclusion, administration of topical CFA may mitigate most common symptoms in knee OA. Our findings suggest that topical CFA is effective in all knee OA patients with slightly higher evidence for those with advanced disease.

We want to thank Prof. Bellamy for developing WOMAC questionnaire and giving us the possibility to use it in this study.