A 65-year-old male patient with a 25-year history of psoriasis and psoriatic arthritis presented to our clinic. He described the onset of new lesions three weeks ago (Figure 1). His dermatologic examination revealed purple plaque and nodules on the anterior and posterior trunk and extremities. One month ago, his examination was performed again in our clinic, and these lesions were absent. Patient's detailed medical history revealed prior use of both conventional and novel anti-tumor necrosis factor-alpha (anti-TNF-α) treatments (methotrexate 15 mg-20 mg/week for four years, etanercept 50 mg/week for two years, adalimumab 40 mg every two weeks for two years, and infliximab 5 mg/kg in usual regimen for two years). Because of refractory psoriatic arthritis; golimumab (50 mg/month subcutaneous) was started after two years of the biologic drug-free period. In a few months, patient’s arthritic complaints resolved; psoriatic plaques diminished. He had received three doses of the drug when multiple purplish macules and plaques had appeared. Skin biopsy was performed from two plaques on the left toe and abdomen. Histopathological examination was consistent with Kaposi's sarcoma (KS), characterized by endothelial and spindle cell proliferation, also scattered erythrocytes and hemosiderin deposits were observed (Figure 2a, b). Human herpesvirus-8 associated antigens were detected in situ by immunohistochemistry. Serologic testing for human immunodeficiency virus was negative. Evaluation of gastrointestinal tract with endoscopy and colonoscopy showed KS lesions. Biopsy from descending colon was consistent with an involvement of KS.

Figure 1. (a) Purple-red colored plaques consistent with Kaposi's sarcoma on anterior abdomen. (b) Macules and plaques on extensor side of forearm.
× 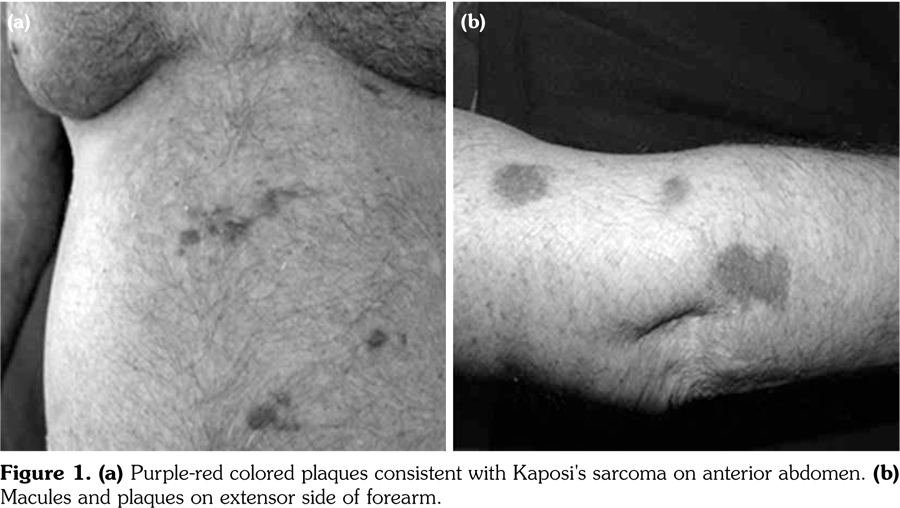 During the past three decades, use of biologic agents in psoriasis and psoriatic arthritis resulted in better control of disease activity and improved quality of life. However, increased risk of severe infections and higher rates of malignancy are still concerns regarding the use of these immunomodulatory drugs. It has been shown that patients with psoriasis are at increased risk of developing malignancies and this risk is higher for patients with severe disease.(1,2) The oncogenic risk is both related to the immunologic nature of psoriasis and also to the multiple immunosuppressants used for its treatment. After the emergence of anti-TNF agents for inflammatory diseases, several anti-TNF drug- related KS cases were reported. Four patients reported with KS were receiving infliximab therapy, and two patients were using adalimumab treatment.(3-8) Similar to our patient, in all of the reported cases, KS developed during the use of the biologic agent. Except for an ulcerative colitis patient with gastrointestinal involvement of KS,(8) the disease was limited to the skin in all of the patients.

Golimumab was approved by Food and Drug Administration for the treatment of psoriatic arthritis, ankylosing spondylitis, and rheumatoid arthritis in 2009. It is a specific immunoglobulin G type human monoclonal antibody, which binds to both soluble and transmembrane forms of tumor necrosis factor α with high affinity. Our patient had received adalimumab and infliximab therapies previously, but there was an anti-TNF-α drug-free period of two years before golimumab was started. Rapid onset of skin lesions and gastrointestinal involvement in the fourth month of golimumab treatment support the causal relationship. Psoriasis patients receiving systemic immunomodulatory drugs must be followed up closely and screening for latent viral infections before initiating the biologic therapy may help in follow-up.