Mizoribine is as Effective as Methotrexate for the Treatment of Polymyalgia Rheumatica: A Retrospective Case Series Analysis

Objectives: This study aims to evaluate the efficacy and safety of mizoribine (MZR) as a steroid-sparing agent compared to methotrexate (MTX) in the treatment of polymyalgia rheumatica in elderly patients.
Patients and methods: Twenty-four patients (9 males, 15 females; mean age 71.7 years; range 50 to 86 years) diagnosed with polymyalgia rheumatica between April 1998 and August 2014, who received prednisone in combination with either MTX or MZR, were included. We collected the data on the cumulative prednisone dose that patients received within 48 weeks after MTX or MZR and its side effect profile.
Results: There were 10 patients in the MTX group and 14 in the MZR group. The cumulative prednisone dose over 0-48 weeks was 2272±396 mg in the MTX group and 1907±241 mg in the MZR group, which was not significantly different (p=0.41). In terms of side effects, in the MTX group, three patients experienced a transient elevation in liver enzymes, and one patient developed gastrointestinal symptoms that led to MTX withdrawal. In the MZR group, one patient was hospitalized due to pneumonia that led to MZR withdrawal.
Conclusion: Mizoribine was non-inferior to MTX in terms of steroid-sparing effects on polymyalgia rheumatica. Also, MZR tended to have fewer side effects than MTX.

Polymyalgia rheumatica (PMR) is a chronic inflammatory syndrome of unknown cause characterized by pain and morning stiffness in the neck, shoulders, and pelvic girdles in elderly people.(1) Glucocorticoids, starting with 12.5-25 mg daily prednisone, are recommended as the initial treatment of PMR.(1) Patients often require treatment with prednisone for one to two years, and in cases of refractory PMR, for much longer.(2)-(4) Long-term prednisone use frequently causes chronic side effects such as diabetes, hypertension, osteoporosis, infections, and cardiovascular events, which affect nearly 60% of prednisone users.(5,6)

Therefore, 7.5-10 mg weekly methotrexate (MTX) is recommended as a steroid-sparing agent in refractory cases or patients at risk for relapse, side effects, or prolonged therapy.(1) However, it is difficult to use MTX for patients with chronic liver disease, lung disease, or chronic kidney disease, due to its side effect profile.(7) There remains a need for an alternative steroid-sparing agent to MTX, particularly in elderly patients.

Mizoribine (MZR) is an oral immunosuppressive agent, widely used in Japan. MZR is an imidazole nucleoside similar to mycophenolate mofetil (MMF) in terms of possessing an inhibitory effect on inosine monophosphate dehydrogenase (IMPDH).(8) MZR has a less serious side effect profile and contraindications compared to MTX and can be safely used for patients with lung disease or chronic kidney disease, although it sometimes causes side effects including infections, hyperuricemia, anemia, and elevation in liver enzymes.(9) MZR has already been used effectively in clinical practice for the treatment of rheumatoid arthritis (RA,10)-(12) systemic lupus erythematosus (SLE,13)-(15) kidney transplantation,(16) nephrotic syndrome,(9) and immunoglobulin A nephropathy(17) in Japan. However, the role of MZR in the treatment of PMR has not been clarified.

Therefore, in this study, we aimed to evaluate the efficacy and safety of MZR as a steroid- sparing agent compared to MTX in the treatment of PMR in elderly patients.

This retrospective single-institution case series included 24 patients (9 males, 15 females; mean age 71.7 years; range 50 to 86 years) diagnosed with PMR at Immuno-Rheumatology Center, St. Luke’s International Hospital (Tokyo, Japan), between April 1998 and August 2014, who received prednisone in combination with either MTX or MZR. All patients fulfilled the 1979 classification criteria for PMR.(18) Exclusion criteria were use of both MTX and MZR, use of other immunosuppressants, giant cell arteritis, and other connective tissue disorders. The choice of MTX or MZR was dependent on the clinical decision in each case. We considered the following factors into decision; patient’s age, comorbidities, and concerns for potential MTX side effects. The study protocol was approved by the St. Luke’s International Hospital Ethics Committee. The study was conducted in accordance with the principles of the Declaration of Helsinki.

The medical charts of patients were further reviewed for 48 weeks after initiation of MTX or MZR. Baseline patient characteristics, including the following risk factors for a relapse or a prolonged therapy for PMR, were analyzed: female sex and high erythrocyte sedimentation rate (ESR) (>40 mm/1 hour) at diagnosis.(19,20) Then, the following data regarding treatment were analyzed: total prednisone dose that patients had received within 48 weeks after starting MTX or MZR, the dose of steroid 48 weeks after starting MTX or MZR, the cumulative prednisone dose between 0-24 weeks and 24-48 weeks, the number of patients who were able to reduce their prednisone dose to less than 5 mg at week 48, the number of flare-ups within 48 weeks, and side effect profile. Flare-up was defined as the development of any signs and symptoms of PMR that needed an increase of the prednisone dose, judged by each attending doctor. Steroid dose reduction was totally dependent on the clinical decision in each case.

Figure 1 illustrates the process of patient selection and analysis in this study. A total of 43 PMR patients met the initial inclusion criteria and were further reviewed. Twelve patients met the exclusion criteria: five patients had been on other immunosuppressants, three patients had been on both MTX and MZR, and three patients had a diagnosis of PMR plus a diagnosis of another underlying connective tissue disease (two had RA and one had systemic sclerosis). Of seven patients who were lost to follow-up within 48 weeks, all ceased to come to the outpatient clinic without any specific reason. 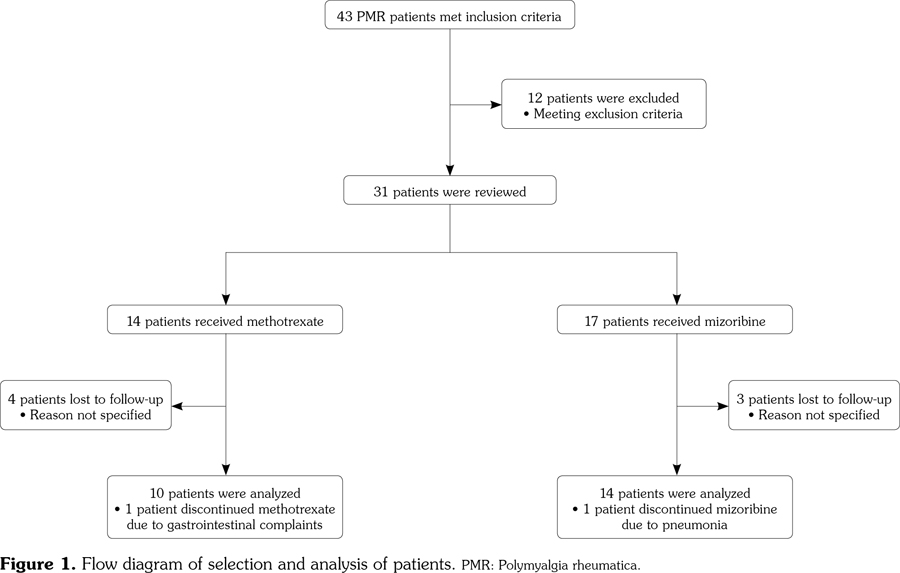 Table 1 shows the baseline characteristics of the 24 patients who met the inclusion criteria. There were 14 patients in the MZR group (5 males, 9 females; mean age 72.9±9.8 years; range 50 to 86 years) and 10 in the MTX group (4 males, 6 females; mean age 70.5±8.7 years; range 52 to 79 years). The maintenance dose of MZR and MTX was 164.3±53.5 mg and 9.4±1.4 mg, respectively. The following baseline characteristics were statistically insignificant between the two groups: age, ethnic origin, ESR at diagnosis, number of patients with high ESR (higher than 40 mm/hour) and C-reactive protein (CRP) at diagnosis, prednisone dose at diagnosis, duration of prednisone monotherapy, prednisone dose at baseline, and comorbidities (hypertension, diabetes mellitus, hyperuricemia, chronic liver disease, and interstitial pneumonia). ESR and CRP at diagnosis were not available for three patients in the MTX group and one patient in the MZR group because the patients were referred from other medical institutions without detailed information.

Table 2. Efficacy of mizoribine and methotrexate
×

We showed that MZR was non-inferior to MTX in terms of steroid-sparing effects for 48 weeks after starting each drug. Although not statistically significant, the cumulative prednisone dose in the MZR group was even superior to that of the MTX group during the period of 24-48 weeks. MZR tended to have fewer side effects than MTX. The results of the present study indicate that MZR can be an alternative steroid-sparing agent to MTX in the treatment of PMR. To our knowledge, this study is the first to report on the efficacy and safety of MZR in the treatment of PMR in the elderly.

Mizoribine is an imidazole nucleoside that was originally isolated from the culture medium of Eupenicillium brefeldianum. Similar to MMF, MZR inhibits the enzyme IMPDH,(8) and therefore, MZR is expected to have similar inhibitory effects on lymphocytes as MMF for the treatment of rheumatic diseases. MZR was approved by the Japanese Ministry of Health, Labour and Welfare in 1984. Since then, MZR has been widely used in Japan for renal transplantation and rheumatic diseases, including RA(10)-(12) and SLE.(13)-(15) Nomura et al.(13) reported that 12 patients with SLE were successfully treated with glucocorticoid, MZR and tacrolimus. In the study, no serious side effects were observed and mean prednisone doses were effectively reduced from 11.0 mg to 6.6 mg in 12 months.(13) Furthermore, Ichinose et al.(12) reported that 32 patients with active RA were treated with MZR, and 56.3% of patients responded without serious side effects. These studies and the present study have shown consistent results in terms of efficacy and safety of MZR, and therefore support the rationale of using MZR in the treatment of PMR.

Treatment of patients with PMR still remains challenging, as the standard treatment options are limited to prednisone and MTX, both of which potentially have harmful side effects, particularly in the elderly. Ayoub et al.(2) reported that 22.7% of PMR patients experienced steroid- related adverse effects. Therefore, harmless agents are needed in the treatment of PMR, especially for refractory patients. Infliximab and azathioprine were tested for the treatment of PMR,(21,22) and more recently, tocilizumab monotherapy has been shown to be effective for PMR in a prospective longitudinal study.(23) Compared to these agents, MZR’s strong point is its safety. MZR can be safely used for elderly people,(11,12,15) and therefore, is a promising agent in the treatment of PMR.

This study has some limitations. First, the duration of prednisone monotherapy in the MTX group was longer than that of the MZR group, suggesting that the MTX group might have included more refractory and more prednisone-unresponsive patients with PMR. That is, the study population might have favored MZR. In addition, CRP values in the MZR group tended to be lower than the MTX group at baseline, although not statistically significant (p=0.06). Taking type II error into account, it might reflect the lower disease activity in the MZR group. On the contrary, the mean value of ESR in the MZR group tended to be higher than MTX group at baseline (p=0.49). Altogether, we may assume that the difference of disease activity between these two groups did not differ remarkably. Second, the small study population did not have strong enough power to show statistical significance. Third, the retrospective nature of the study limits the interpretation of the results.

In conclusion, MZR showed non-inferior or even superior steroid-sparing effects than MTX, and adverse events were acceptable in the MZR group. Our results are encouraging for the use of MZR in the treatment of PMR especially for elderly people who cannot tolerate MTX. However, our findings should be validated in larger prospective cohorts in the future.

The authors thank the staff of the Immunology/ Rheumatology department for their encouragement during the study and the staff of the Center for Information Systems for patient identification.