Idiopathic Interstitial Pneumonia as a Possible Cause of Antineutrophil Cytoplasmic Antibody-Associated Vasculitis: A Case Report

There are conflicting data to date on the causal relationship between idiopathic interstitial pneumonia (IIP) and antineutrophil cytoplasmic antibody (ANCA), since they are often observed simultaneously.(1) If patients with IIP are found to have myeloperoxidase (MPO)-ANCA, two possibilities may be considered: MPO-ANCA may play a role in the development of interstitial lung disease/pulmonary fibrosis, or fibrotic process in IIP may induce production of the antibody.

In 2011, Guilpain et al.(2) showed that serum- induced fibroblast proliferation in vitro was highly increased in microscopic polyangiitis with pulmonary fibrosis compared to that without it, probably through oxidative stress, suggesting the potential of MPO-ANCA to trigger the fibrotic process. However, it remains unknown whether such findings are reproduced in vivo. In this article, we describe the case of a patient with microscopic polyangiitis that developed after positive conversion of MPO-ANCA during the course of IIP.

A 72-year-old female patient was admitted for rapidly progressive glomerulonephritis. Three years previously, she was first suggested to have interstitial pneumonia on health checkup. However, she did not visit the office because she was asymptomatic. One year later, the patient visited the hospital for exertional dyspnea. She also had noticed Raynaud’s phenomenon and sicca syndrome for several years. Chest X-ray showed permeability loss of the lower lung fields (Figure 1). High-resolution computed tomography of the lung showed ground-glass opacities with traction bronchiectasis in the peripheral lungs, without honeycombing, which was compatible with nonspecific interstitial pneumonia (Figure 2); at that time, laboratory test showed negative result of MPO-ANCA (<1.0 U/mL; normal <3.5 U/mL) (Figure 1). The test for anti-nuclear antibody was positive at 80 folds for homogeneous and speckled pattern (normal range <40 folds); however, the results for anti-topoisomerase, anti-centromere, anti-ribonucleoprotein, anti-ribonucleic acid polymerase III, and anti-Sjögren syndrome antigen A/Ro and anti-Sjögren syndrome antigen B/La antibodies were all negative. Accordingly, the diagnosis of interstitial pneumonia associated with rheumatic disorders was not considered likely. The results of bronchoalveolar fluid analysis, including cellular profiles, cytology, and culture for bacteria and mycobacterium, were not remarkable. Transbronchial biopsy showed no pathogenic findings. Therefore, patient was considered to have IIP. She was followed-up without therapy. Ten months before admission, she developed polyarthralgia and was suspected to have rheumatoid arthritis following a positive result for rheumatoid factor; at that time, testing for MPO-ANCA showed positive conversion, at 9.0 U/mL. The dipstick test, however, showed negative result for uric blood and protein. Therapy with tacrolimus and celecoxib alleviated her symptoms. Her medical history included cholecystectomy and lumbar compression fracture, and her medication regime comprised tacrolimus, celecoxib, famotidine, and sulfamethoxazole/trimethoprim. She denied a history of fever, sensory disturbance, or rash. On physical examination, body temperature was 36.3°C, blood pressure was 154/94 mmHg, and pulse rate was 95/minute. Respiration rate was 12/minute on room air. There were fine crackles on the lung bases and edema of the legs. No abnormal findings were observed on the heart, the abdomen, the skin or the neuromuscular system. Laboratory test results were as follows: white blood cell, 11130/μL (neutrophils 75.5%); C-reactive protein, 6.13 mg/dL; urea nitrogen, 42.2 mg/dL; creatinine, 4.23 mg/dL; urine protein, (2+); spot urine protein/creatinine ratio, 2.7; and 24-hour urinary protein excretion, 2.0 urine sediment showed urinary erythrocytes of >300/high-power field, red blood cell cast of 5-9/high-power field, and granular cast of 1-4/high-power field. The level of MPO-ANCA was highly elevated at 71.2 U/mL. X-ray of the hands did not show significant findings of erosion or joint space narrowing. A retrospective review of chest radiographs revealed slow progression of the pulmonary fibrosis (Figure 1). Computed tomography of the lung also revealed progression of pulmonary fibrosis. Renal biopsy showed necrotizing crescentic glomerulonephritis, leading to the diagnosis of microscopic polyangiitis (MPA). Methylprednisolone pulse therapy, followed by high-dose prednisolone, and intravenous cyclophosphamide improved renal function. Four months after therapy, the levels of urea nitrogen and creatinine were 29.8 mg/dL and 1.55 mg/dL, respectively. A spot urine protein/creatinine ratio was 2.4, while urinary sediment was inactive. 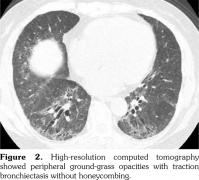 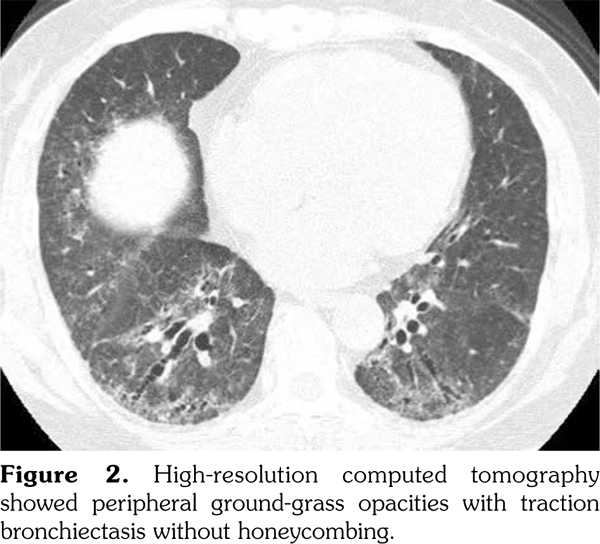 Our case was diagnosed to have IIP for the following reasons: (1) her conditions did not suggest known causes of interstitial lung disease such as drug or inhalational exposure or collagen vascular diseases,(3) and (2) transbronchial biopsy and bronchoalveolar fluid analysis did not show pathogenic findings for hypersensitivity pneumonia, sarcoidosis or eosinophilic pneumonia. Along with progression of IIP, the test for MPO-ANCA was converted to be positive, and subsequently ANCA-associated renal vasculitis, namely MPA, developed.

To our knowledge, 10 cases with MPA associated with positive conversion of MPO- ANCA following the diagnosis of IIP have been reported in detail (Table 1).(4-6) Three of the 10 had diffuse alveolar hemorrhage, nine had renal vasculitis, and six died within a median follow-up period of 15.8 months. Accordingly, the MPA cases developing after the seroconversion following IIP diagnosis may tend to present with pulmonary-renal syndrome, and had a worse outcome.

Kagiyama et al.(6) vigorously investigated positive conversion of MPO-ANCA in a large cohort of patients with interstitial pulmonary fibrosis and described that the incidence of seroconversion of MPO and proteinase 3 were 13.10 and 12.23 cases per 1,000 person-years, respectively. Of their 468 interstitial pulmonary fibrosis patients without ANCA, six (1.3%) subsequently had MPO-ANCA and MPA over a median follow-up period of 4.02 years.

An analysis of bronchoalveolar lavage fluid showed that the pulmonary fibrosis was associated with higher neutrophil percentages and higher levels of neutrophil-derived enzymes, including MPO, compared with those for healthy controls and patients with scleroderma lung disease.(7) The neutrophil also has a function to promote pulmonary fibrosis.(8,9) Sustained activation of neutrophils in IIP may trigger an autoimmunity against MPO and proteinase 3, as seen in several infectious diseases in which ANCAs have been detected.(10)

In conclusion, a significant number of MPA cases developing after seroconversion of MPO-ANCA following the diagnosis of IIP has been reported. These observations as well as Kagiyama’s work suggest that interstitial pulmonary fibrosis may be a cause, rather than a result, of the production of ANCA, and may even be a cause of MPA.